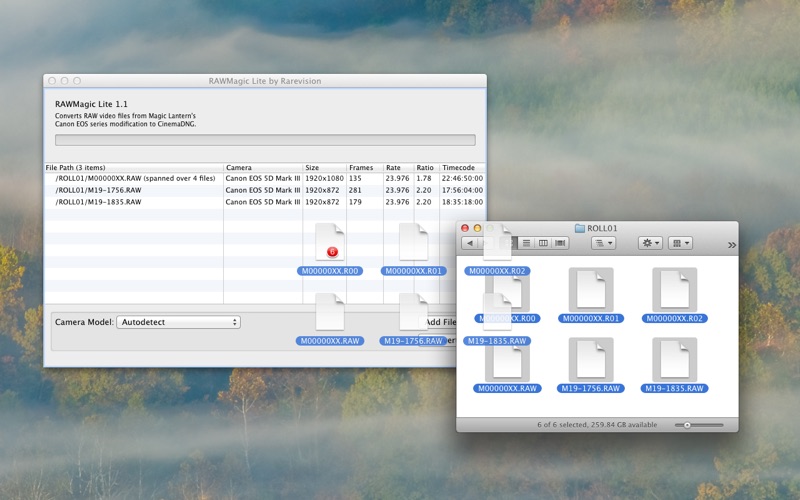 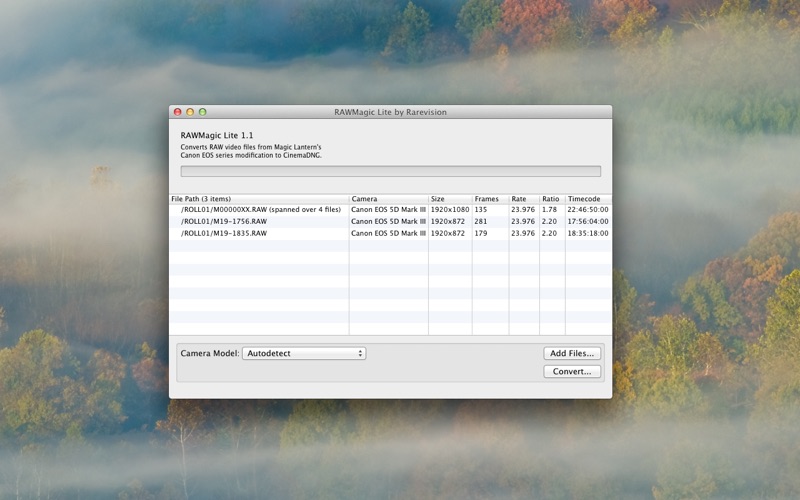 Amazing app, i’m considering purchasing the full version!! but this version is free and it does the Job!! works great!! it converts my .RAW file to .DNG files that i can transfer into After Effects!! amazing!!! I’m so happy to be the first to review this great APP
By yeeiPLAY

Never let me down!

Thanks Rarevision for making this app, I’ve been using it for my video works since the earliest version and it does the converting Magic Lantern raw to CinemaDNG flawlessly! I will consider to buy the paid version. This is clearly the best!
By audyerel

This version makes solid DNG sequences with spanning of RAW video files from Magic Lantern 5Dmk3. DNG’s open properly in AfterEffects and allow you to adjust in Adobe Camera Raw. However, they don’t open correctly in Premiere or Speedgrade. I think this is 12bit vs. 16 bit issue, not sure. Maybe there’s a workaround. Would like to know if the paid version gives you any other options such as proper import into Premiere Pro/SpeedGrade. Description on paid app page seems to indicate this.
By ExpProvideo

Thanks for uploading this to MAS! Great app for DSLR RAW! I only wish for MLV support - this app is the reason I still shoot RAW v1 (=
By Stanly.ok

Thank you Thank you!!!! ML team and Rarevision rocks!!
By Syphin24

The does wonder for the workflow!!

My only gripe is I had the beta version, when I updated to this candidate I noticed there is no option to remove files. If we could get that feature it would be awesome and perfect. I'm testing different resolutions and fps so I only want to convert certain ones and I cant tell which is which until I drop them into the app. Thanks for all the hard work for this app and thanks to ML for there never ending genius!
By AbstrakMedia

While other apps convert Magic Lantern RAW files to an unreadable DNG format this one converts it to cinema DNG which can directly be viewed in preview. I normally use this app and then import the cinema DNG to after effects as camera raw sequence and export in Prores ready for editing. This app also supports takes broken over multiple files due to 4gb FAT32 limitation incase you haven't formatted your card for exFAT. I haven't tested it with files that are stopped midway and have their footer information missing. The other converter I like is one which converts RAW directly to Cineform but it is for Windows only. It is the fastest workflow though but don't know if it works for all kinds of files.
By Aneesh Arora