"Episode lets you LIVE your stories through love, romance, adventure, and drama. Wouldn’t it be amazing if YOU were a character in your favorite story? Episode lets you do just that with over 100,000 gripping stories, where you make choices that matter. With billions of reads, Episode is the world’s largest collection of interactive stories where YOU choose your destiny. Or become a creator and write your own! How does it work? • Customize your avatar and design your outfit • Develop relationships with your favorite characters - will they be rivals or lovers? • Change your fate through your choices • Discover all of the different endings • Immerse yourself in thousands of diverse worlds, the options are endless! Not only can you read your favorite stories, you can also write your own! Write and publish your very own interactive stories on Episode’s platform, amassing millions of reads yourself. Some of our favorites reads: You’ve been selected to join LOVE ON FIRE, the ultimate dating competition. You’ll live in a luxury beach-front mansion with other hot singles and look for your true love! RULE BREAKER: Find out what happens when you start crushing on someone who's technically ""off limits."" Will you pursue that romantic spark? THE K*SS LIST is here! Kentwood Academy is ripe for taking over. Continue your perfect streak of ruling schools by kissing 10 of Kentwood's hottest singles. IT’LL BE OUR SECRET: Fighting infertility becomes easier when you and your super cute neighbor start a secret affair. The drama that comes with it...not so easy! I MARRIED A MILLIONAIRE: Do opposites attract? You’ve never believed in love... but when you marry a sexy millionaire, you begin to think otherwise. FRIENDS WITH BENEFITS: Things between you and your BFF are suddenly...changing. Everyone says you can't cross that line, but what if the love is real? Other goodies include: • Clueless: School’s Out • Pretty Little Liars • Mean Girls: Senior Year • Demi Lovato: Path to Fame • Falling for the Dolan Twins PLUS…more new stories EVERY WEEK! PRETTY LITTLE LIARS and all related characters and elements © & ™ Warner Bros. Entertainment Inc. (s18) TM & ©2018 Paramount Pictures. All Rights Reserved. PLEASE NOTE: Episode lets you purchase items within the game for real money. Please disable in-app purchases on your device if you do not want this feature to be accessible EPISODE VIP SUBSCRIPTIONS: We are currently in the process of rolling out a subscription feature - check out the details below! You can subscribe for ad-free, unlimited access to Episode content as well as increased opportunities to earn free gems. Payment will be charged to iTunes Account at confirmation of purchase Subscription automatically renews unless auto renew is turned off at least 24 hours before the end of the current period Account will be charged for renewal within 24 hours prior to the end of the current period Subscriptions may be managed by the user and auto-renewal may be turned off by going to the user's Account Settings after purchase No cancellation of the current subscription is allowed during active subscription period Any unused portion of a free trial period, if offered, will be forfeited when the user purchases a subscription to that publication Your use of this application is governed by the Terms of Service available at http://pocketgems.com/episode-terms-of-service/. Collection and use of your data are subject to the Privacy Policy available at http://pocketgems.com/episode-privacy-policy/. 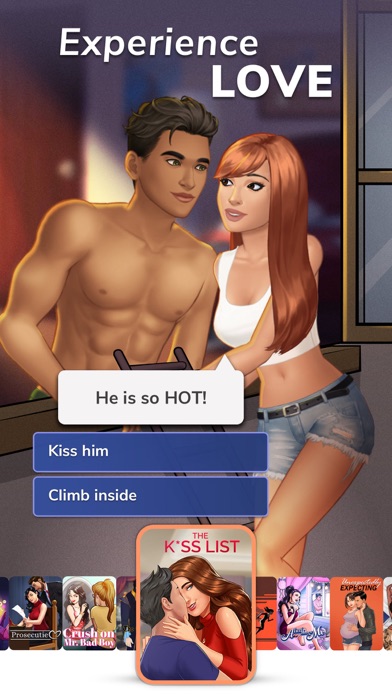 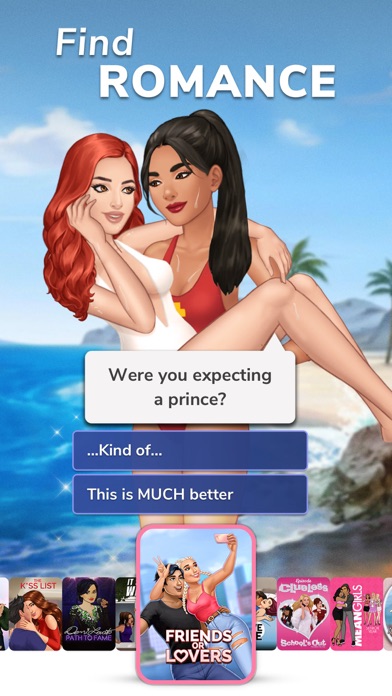 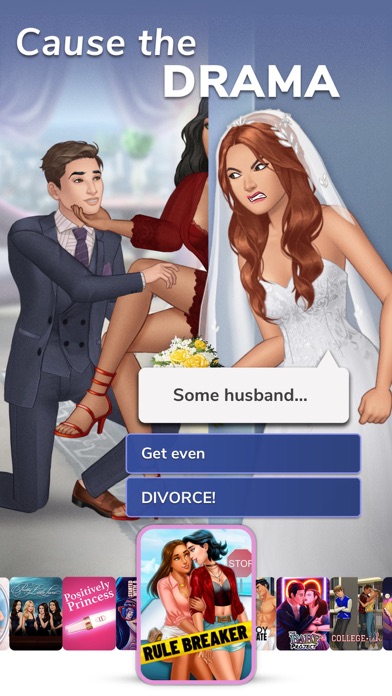 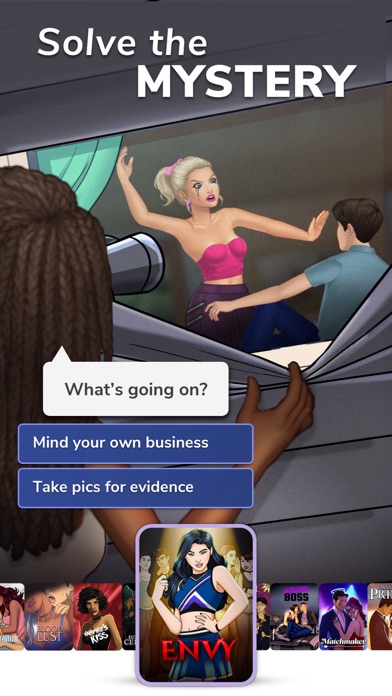 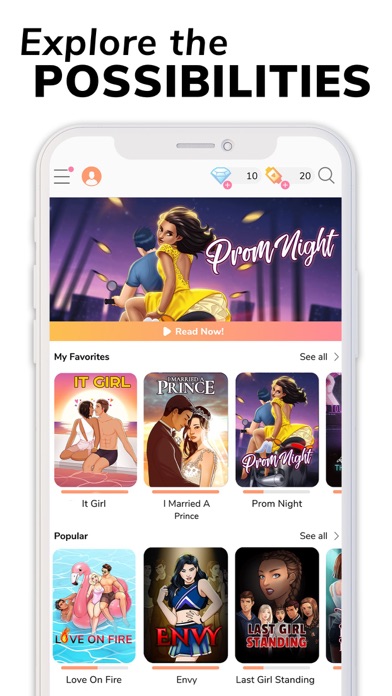 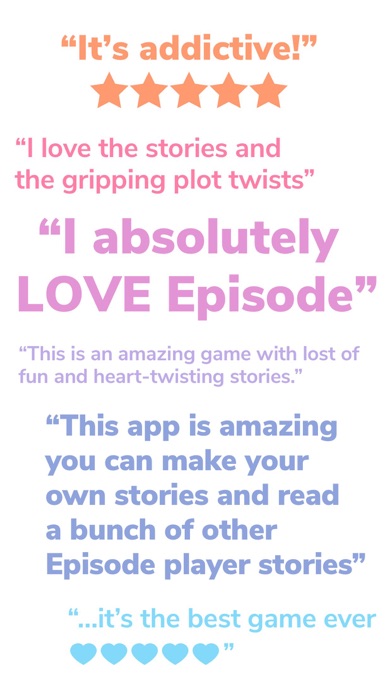 this game has good stories, good options, and good entertainment. but the worst thing about this is having only four tickets in a specific amount of time. and for the good options we have to use 29 diamonds or more (who i don’t know about you but we don’t have much for them good options) it’s ridiculous. i mean to get more you guys want us to pay for more. if you don’t have money it’s not our problem but i think the better path to take here is to remove that and maybe you will have more players downloading this app and actually being on it. i mean i still use it but im forced to use the lame options. i just wish y’all could change it a lil. idk mayyybe if you ever read this and think about it.
By ycn.evelyn

I like that I get a gem for finishing a chapter, but I think it would be reasonable to get around 5 gems. when you finish a story and when a new costumer gets the app, they should get a small gift of gems to start off with. I also think that you should offer gems for free when a customer watches a certain amount of adds. One more thing, I also think there should be a shelf near the top of the list that involves a lore of sleeping and dirty sex, I also think costumers should expect to see naked parts in this game, so I’d rather more have the black parts over someone’s parts, especially since it is nature and it’s animated anyway. Ty! That’s all.
By Patinkin

Another pay to play “free” app

The micro transactions are RIDICULOUSLY restricting. Also someone needs to work on those walk cycle animations because they are rough.
By rahrahlouis

I love this game so much but wish the diamonds wasn’t so much... hate to keep buying and buying diamonds...
By QweenArQ

Never finish this story never give 5 stars are money until you do so .
By Bsada9

I love episode would recommend but I have a suggestion

I love this game I got it while I was on vacation and it was and is, the best story game ever I love how in story's they don't focus too much on the story and give Options often unlike other story's that don't give options almost ever I like having a choice,but the only thing I don't like is how much diamonds some things cost I'm not sure if the game controls that or not but and I play this game so much it's still overall the best story game
By nick fan girl

Hate that u have to pay to make choices

I used to be a weekly loyal subscriber but now it’s become a money mockery. Too bad for stories are good. They charge 14.99 per 1 week of unlimited play. And to top it up they hold chapters for u to purchase them when they have been released already just so they can make some money. I understand business side but do not support over charging. Suggestions: Charge a monthly subscription and make it decent price. Stop asking for customer to pay for chapters already released when are already using tickets and asking for if u want to read next chapter pay diamonds or wait 1day bull.
By martyhetnandex