Amharic is one of the official languages of Ethiopia, spoken by a large part of the country population either as a first or second language. It is one of the most widely spoken Semitic languages in the world. Amharic app makes learning the language so easy and fun. It allows you to get familiar with the various parts of this intriguing language at your own pace. And if you are already fluent in Amharic, you will find this app to be an excellent reference. You can learn the basics starting with the letters of the Alphabet and then work your way through the numeric symbols and punctuation marks. You may then go on to build your Amharic word power one by one, by navigating through categories or by searching for their English equivalents in the vocabulary section. While you are in the Vocabulary section, you can learn how to communicate with common phrases such as ‘Thank You’, ‘Hello’, ‘Goodbye’ and much more. In the likely case that you are interested in the sounds of the words and characters of the Amharic language, you may tap on any letter, number, word, or phrase to the listen to the recordings as spoken by a native speaker. Using the Amharic iOS app, you can - Learn the symbols and sounds of the letters in the Amharic alphabet - Play a fun game of Amharic Letter Puzzle. You drag to move the letters around to get them in syllable order and win the game. - Learn about the number symbols used in the Amharic language and how they sound. - Get to know punctuation marks used in Amharic text - Browse through and amass a vocabulary of words and phrases in the Amharic language - Enhance your Amharic learning with Vocabulary Flash Cards. Test yourself by switching from English to Amharic and vice-versa. Tap on the Amharic letter to learn the pronunciation. Coming Soon: - Lots more words and phrases to enjoy in the vocabulary section. - Additional features and enhancements suggested by users. 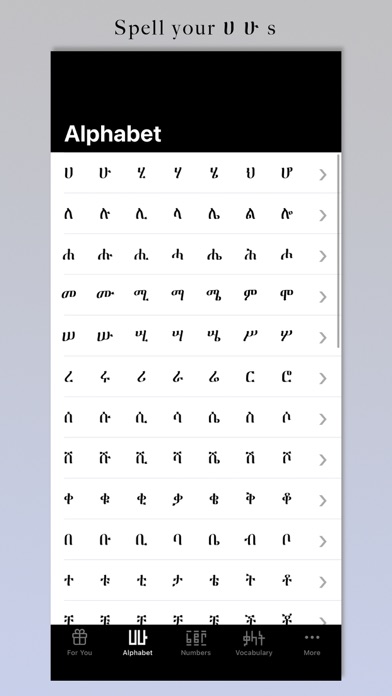 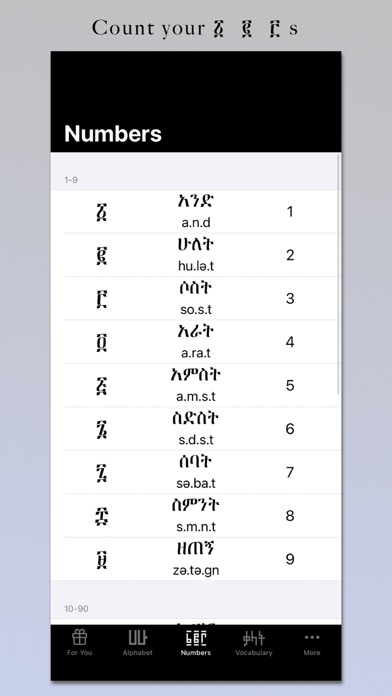 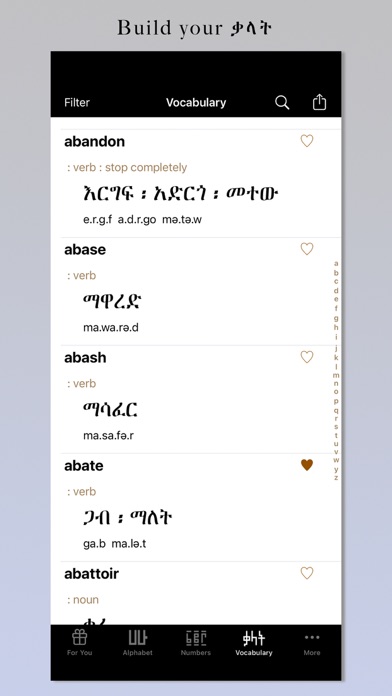