DIG! FIGHT! EXPLORE! BUILD! Join the community of millions of Terrarians! TERRARIA MOBILE REBUILT FROM THE GROUND UP – NEW AND IMPROVED AND NOW INCLUDING ALL OF THE CONTENT FROM THE EPIC JOURNEY’S END 1.4 UPDATE! "This is the full version of Terraria, built from the ground up... If you loved it on PC or consoles, you’ll love it here.” - Slide To Play The very world is at your fingertips as you fight for survival, fortune, and glory. Delve deep into cavernous expanses, seek out ever-greater foes to test your mettle in combat, or construct your own city - In the World of Terraria, the choice is yours! We recommend at least iPhone 6S, iPad Air 2, iPad Mini 4 or newer. We support iPhone 5S, iPad Air 1, iPad Mini 2 running at least iOS 10.0, but these devices may experience reduced performance. • MULTIPLAYER – Play with up to 7 friends on Local Wifi or Online via device-device Wifi hosted games or through the Mobile Terraria Dedicated Server for PC (available for free on Terraria.org) • TERRARIA REIMAGINED FOR MOBILE – Fully customizable controls and User Interface provide a level of polish and capability not previously possible! • Gamepad support – including fully-remappable buttons - Play with your Bluetooth connected gamepad where supported. • Full array of World sizes – Small/Medium/Large...the same size as on Terraria for PC! Now includes random world name generator and the ability to use World Seeds (including some hidden easter egg worlds) • New! On top of the additions from Journey’s End, all of the Terraria content from the 1.3.1 – 1.3.5 updates is here! This includes: - Wiring Overhaul, logic gates, sensors, and the Grand Design - Desert Overhaul, Sandstorms and Blizzards - Party Events - Old One’s Army crossover event - And much more! • New! Master Mode presents an even higher level of challenge for the worthy Terraria veterans. • New! Journey Mode creates a more accessible Terraria experience than ever before – tailor your gameplay to fit your unique preferences! • New! Quality of Life features – from Block Swap to the Void Vault to Boss Health Bars to customizable UI appearance options • New! Atmospheric and Weather effects will play a greater role than ever before! • New! The Terraria Bestiary will help you keep track of the enemies, allies, and critters you encounter! • New foes, including brand new bosses and events to test your mettle in combat • Over 400 enemies to combat, defeat, and plunder for loot • Over 20 Biomes and Mini-Biomes to explore, both above and underground – from lush forests to barren deserts to dungeons, the underworld, and even the terrifying Corruption await! • Updated crafting with multiple added item options • Over 20 NPCs to discover, each providing their own benefits and unique style • More than 1000 new items to discover – bringing the total item count to more than 5000! • In-depth building options that are easy to learn but allow for amazing feats of architecture in the hands of a master. • And much, much more! In short, every pixel of Terraria has been reimagined and hand crafted for the BEST possible mobile experience! Follow us on Twitter @Terraria_Logic and @505_Games Join our community on Discord @ http://Discord.GG/Terraria Like us on Facebook at www.facebook.com/TerrariaOfficial and https://www.facebook.com/505Games Visit us on the web at www.terraria.org Join the official Terraria Forums at: https://forums.terraria.org/ 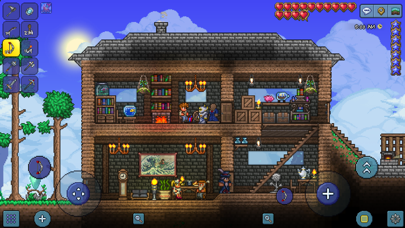 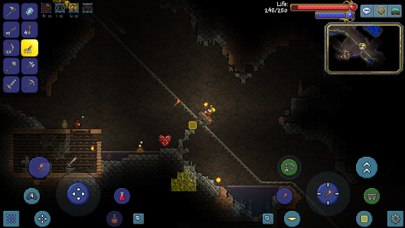 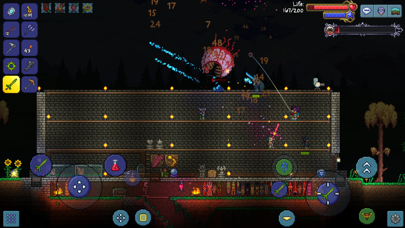 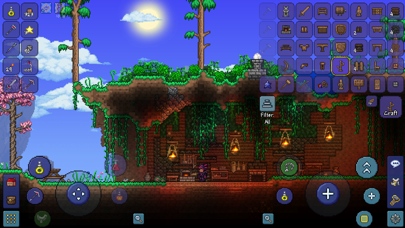 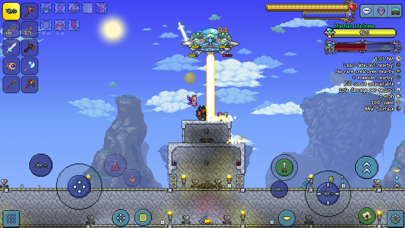 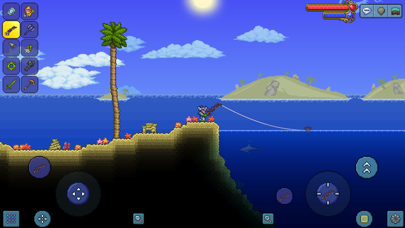 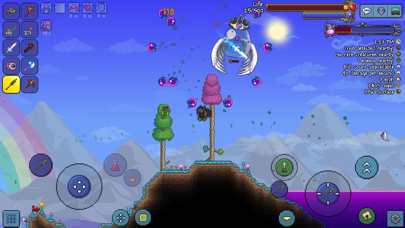 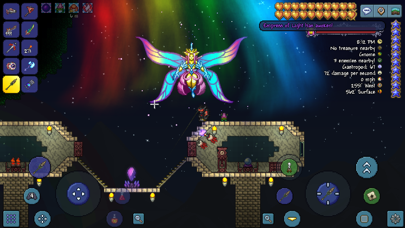 This game is weird

Hello! Terraria is my favorite game but the multi player is not working.I’ve tried almost everything. Please help. Please, and thank you.
By faze rfue

Amazing but duplication is OP

I absolutely “LOVE” this game, me and my sister have played this game since our childhood, and we have no problems besides duplication, we have just found that you can duplicate money, and we think that it is very overpowered. We would like you to patch this duplication, it is so overpowered to the point where it is no longer fun looking at what the traveling merchant has, and having to work for it to have enough money to buy it. (With a time limit) The same goes with ores like platinum, Crimtane, that one pink ore, and so on. Please fix this, me and my sister will greatly appreciate it. Thank you Sincerely, Niccolas
By Ultimate Smackdown

Love the game but hate controls.

I own this game on ALL the platforms, Xbox, original on pc. Now on mobile, it has the same content and same running smooth little to no flaws except for the controls. The controls have gotten me killed countless time when I want to move to the left I jump or it won’t move and I get hit by a mob. I go to mine one single torch after it deciding after not placing it’ll spam place them and I want to remove all the extra ones but instead I’ll dig 50 blocks out before it goes oh now I’ll target the torch. The controls often times get me so frustrated that I quit playing. They aren’t the easiest thing to use but I’ve played other game where as the controls are flawless on mobile where these are just simply a cluster f*#k. They don’t work flawlessly so I hope you decide to make options for different control layouts. Other than that I still love the game, not looking forward to fighting bosses with the horrible controls
By Dirtbike88

This is the worst game!!!

I just got this game today and I don’t like it at all. It’s all screwed up and what I mean by that is controls. It keeps crashing and I have an IPhone 7. I would like to have a full refund.
By Aidan.Knight2003

I just wanna say I feel bad for people that can’t afford 5 dollars. But I love this app my favorite part is the exploring I’ve won it to, not bragging lol. Anyways I think it’s a really good app, keep up the good work re- Logic!
By xxxxxxxx:(

This game is so confusing, I had my friend explain it and nothing really helped, online is impossible. Its not worth the money.
By CaptainBro458

Almost everything about this game is amazing, from the thousands of items and weapons to find, to the nicely detailed bosses and game pathing. However, there’s a slight issue. No matter how amazing a game is, if you can’t control it well, you can’t enjoy the game fully. I think that the developers tried their best with the touchscreen controls and they’re ok, but it would be nice to add keyboard and mouse support.
By kenny2816

Brothers: A Tale of Two Sons