By Half Mile Labs LLC

Map routes with your finger and Footpath will snap to roads and trails. Measure distances and elevations in seconds, then navigate along with turn-by-turn directions. Footpath is the ultimate companion for planning and navigating custom routes. Join millions of adventurers and plan out your perfect route. SNAP TO MAP Quickly measure distances by tracing a map with your finger or Apple Pencil. Footpath will snap to roads and trails on the map. MEASURE DISTANCE AND ELEVATION Know exactly how far and how high you'll travel with elevation profiles. Plan routes that match your goals. SAVE ROUTES FOR LATER Plan out your week or trip. Keep up to 5 routes on hand for reference, or save unlimited routes with Footpath Elite. SHARE ROUTES Send your routes to friends or workout partners to open on their device. Footpath is designed to work for pretty much any activity or adventure, in any country: • Running • Cycling and mountain biking • Hiking and mountaineering • Walking • Motorcycling and driving • Backcountry skiing • Kayaking and standup paddleboarding • Sailing • And many more! FOOTPATH ELITE Ready to go the extra mile? Upgrading to Footpath Elite unlocks the following powerful features: TURN-BY-TURN NAVIGATION - Footpath will tell you when to turn with turn-by-turn audio cues on your iPhone and Apple Watch. - Save your route and cues in advance for voice guidance that works completely offline. - Double tap your AirPods or use the playback controls button on your headphones to replay your next cue. PREMIUM MAPS - 3D and topographic maps including Footpath Outdoors (Worldwide), USGS Topo Maps (U.S. and Canada), OpenCycleMap (Worldwide), and many more. - Cycling lanes, avalanche slope shading, and elevation contour lines. - Save places as favorites to customize your maps ORGANIZE - Create and edit unlimited saved routes - Duplicate, merge, and split routes - Organize and sort routes into custom lists ANALYZE - Calendar log and weekly summary of your activity - Analyze splits, speed, elevation, and heartrate - Speed heatmaps EXPORT - GPX import and export - TCX and FIT course export for turn-by-turn navigation on Garmin and Wahoo GPS devices - Export cue sheets to a spreadsheet app for customization and printing - Export routes and workouts to Apple Health You can purchase a Footpath Elite monthly or yearly subscription through your iTunes account. Your subscription will automatically renew unless cancelled at least 24 hours before the end of the current period. Auto-renew can be turned off anytime by going to the Manage Subscriptions page in settings after purchase, and your features will remain active until the end of the subscription period. Your account will be charged for renewal within 24-hours prior to the end of the current period at the same cost as your original purchase. TIPS FOR MAPPING ROUTES • For longer routes, try zooming in and mapping your route in multiple segments. • Tap and hold the map to quickly route between waypoints and POIs. • Did Footpath snap to the wrong roads? Trace over the incorrect segment to edit, or use the eraser tool. • Turn off snap to roads (magnet icon) and zoom in to manually trace the map. (Try switching to a satellite layer). • Displaying maps and continuously running GPS in the background can dramatically decrease battery life. Navigate without maps or with the screen off for all day battery life. CONTACT US We've got a lot planned for Footpath. If you have any suggestions or feedback, or if you run into any issues, please contact us at support@footpathapp.com Terms of Service: https://footpathapp.com/terms Privacy Policy: https://footpathapp.com/privacy 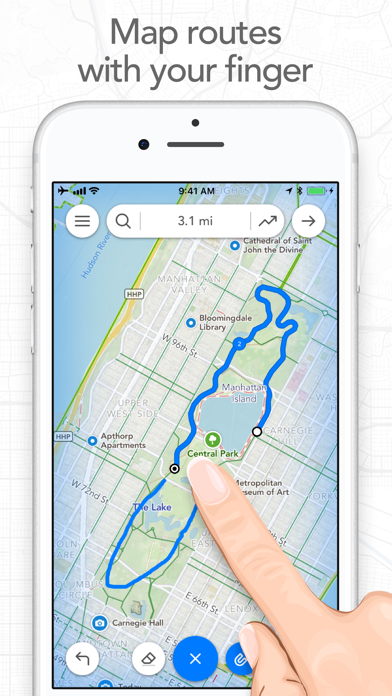 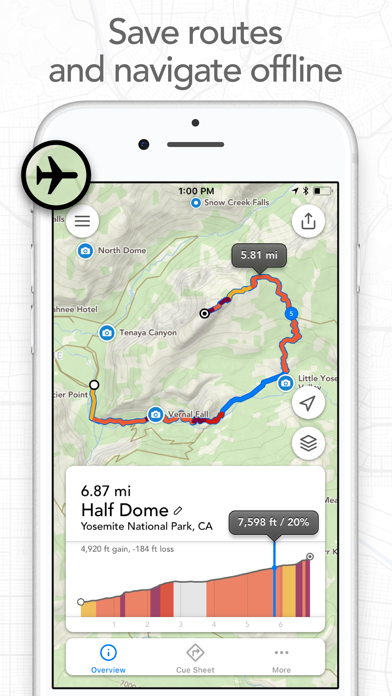 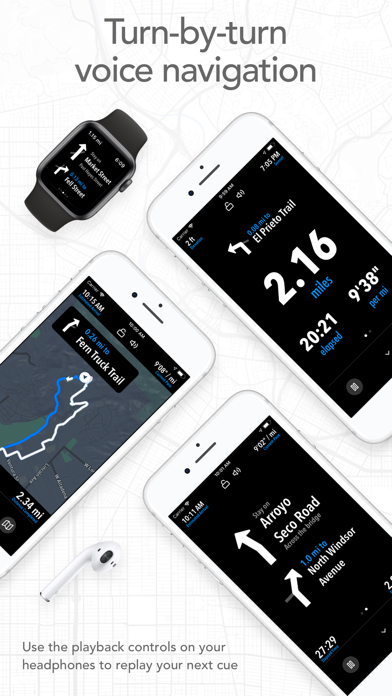 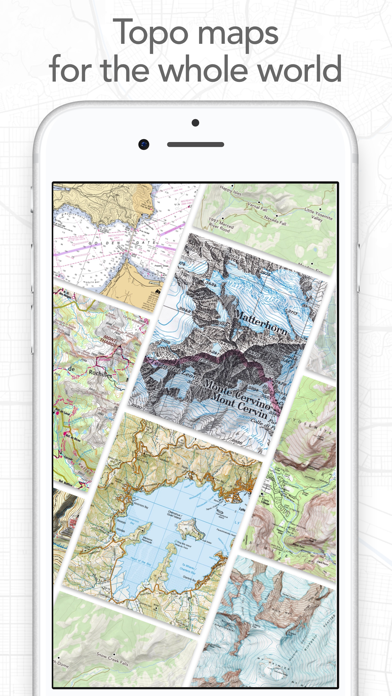 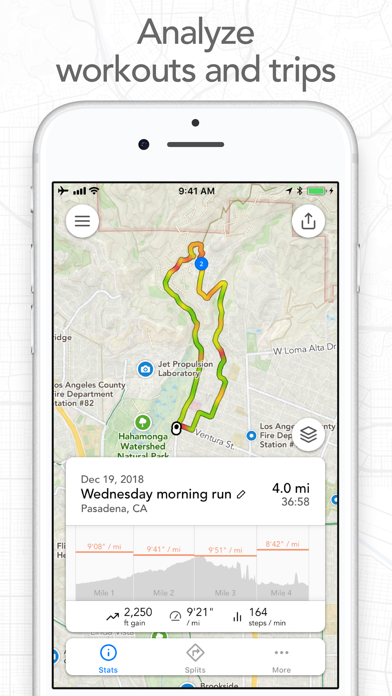 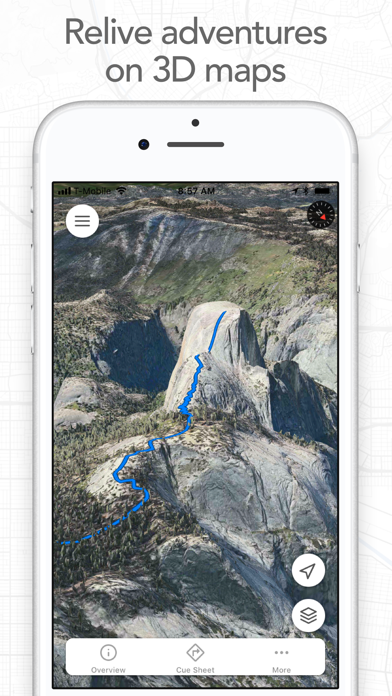 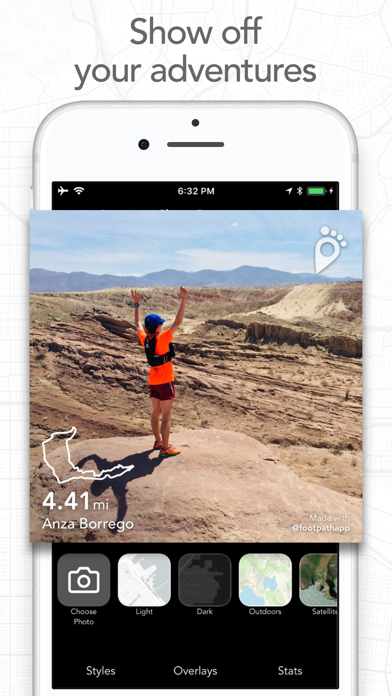 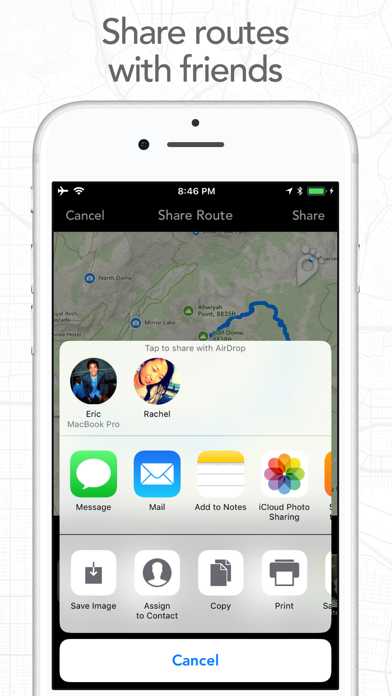 Off the beaten path

I live in the piedmont of western NC and ride a motorcycle…a lot. I’m only about an hour from the Blue Ridge parkway which runs through the most beautiful mountains in the United States. The Blue Ridge and the Smokies and I like back roads that provide me fantastic views you’ll never see with your GPS. There are breathtaking waterfalls all over western NC that aren’t on most maps - you have to find them. GPS takes you from point A to point B…period. With FOOTPATH I can explore and discover. That’s my zen, my natural high and this program gets me there. No other map does that. It’s a bikers best friend!
By JD Pru

I love using this when I need to plan a route of a specific distance. The issue I have is that it consistently exaggerates the distance by a quarter mile per mile. So I have to remember to find a route that it says is longer than what I actually need. It’s annoying.
By Fishchick72

Use this for everything I do when it comes to Rucking, Hiking or planned any distance event. Easy to use, accurate and reliable.
By NC4Sure

This is the best route planning app for runs and walks. It’s feature rich and intuitive. Update: still an amazing app and company. Get this app if you do any outdoor activities.
By Meshuggah003

I use this with a Apple Watch 6 and iPhone 11. Weird gps reactions: The way it seems to lose gps at times isn’t great. The map display on watch displays wrong view. For example, the app seems like it wants the watch to face one direction and run exactly like that. It always is trying to figure out how to display the maps, continuously shifting and moving which way runner is facing. Bluetooth/Wi-Fi/cell data mishaps: For some reason transitioning from Wi-Fi to cell data always seems to take awhile. Most times about 10 minutes or less into running, a song will suddenly come on, and it works. And seldomly it becomes a silent run. I though my headphone wasn’t connecting but on my reg music app it’s fine. During certain times it’s a real shame it does that. Additional needed functions: I would like to see multi selections on tracking splits. To see what certain splits i can focus on. I wish the route planning was more nimble. It always wants to plan a route in a certain way, but that doesn’t work in less traveled trails. I wish it plays better with other music apps. For some reason it always wants to be confused when I start messing with next/volume on my ear buds.
By bash_error

Back roads and unknown trails

I love all the trails we find in our own city with this app. Except once when the trail was private and we couldn’t access it.
By walking knitter

En Route to a Better FootPath

I am a pre-diabetic middle aged male who needs to map out routes for safety and distance. I enjoy the Elevation change feature, and the variable map overlays DO help. This app has many great features! One feature that I think is missing is a flip route feature. Sometimes I want to change my perspective as I walk. Just one idea. I have seen the Out & Back feature added recently( or I JUST noticed it). And have used that successfully. I also enjoy the send to watch feature for my Cellular & GPS enabled series 5. Rarely has the voiceover feature actually worked as I listen to podcasts or audio books while I’m out. I like the haptic feedback at the mile markers very much. I just hope there’s a way to not use up so much battery on my AW5. Another small issue that I’ve had happen is after I sent the route to my watch it appears there’s a second or 3rd instance on the cue. I would like a single reasonable “ONE time” fee but I suppose Developers need a continuing income stream to continue developing and improving the app. So keep working at making it better and worth the annual price and I’ll keep coming back. Overall a 4⭐️ out of 5.
By F00LK1LL3R

I have (by time of posting HAD) a paid footpath membership with route downloaded for offline use in remote wilderness. Did some one day testing and all seemed fine. Not great at doing turn by turn in areas with lots of trees and steep topographic terrain, bit this is likely limitation of receiver on device - iphone 13 pro) . Not a deal breaker. What was a deal breaker was on day two of multiday wilderness trip, with iOS and app having been update just prior to trip, app continually failed to open while I was several hours away from fast internet. Tried restarting phone, to no avail. I had to switch to backup map and compass for navigation along with offline Google maps for some topo info. Footpath only began working again when I could connect to faster itnernet and update app. That's unacceptable for a paid navigation app touting offline capabilities. It cannot fail like that. For me, I want an app that allows hands free turn by turn navigation telling me where to go right, left, or straight, with indications for markers I leave for potable or non potable water all of which I can just listen (with say one earbud inserted) through hands-free 95% of the time without looking at or holding the device. This is not that.
By heijamie

More by Half Mile Labs LLC

By Half Mile Labs LLC