Logic Pro X is the most advanced version of Logic ever. Sophisticated creative tools for professional songwriting, beat making, editing, and mixing are built around a modern interface that’s designed to get results quickly and also deliver more power whenever it’s needed. Logic Pro X includes a massive collection of instruments, effects, loops and samples, providing a complete toolkit to create amazing-sounding music. Professional Music Production • Record and edit MIDI or audio using a comprehensive set of editors and tools • Keep takes organized with take folders and build comps quickly with Quick Swipe Comping • Track Alternatives let you create and switch between different playlists of regions and edits on a track • Fix out-of-tune vocals and change the melodies of recorded audio with Flex Pitch • Manipulate the timing and tempo of any recording with ease using Flex Time • Use Smart Tempo to import audio and have it automatically conform to your project BPM • Comprehensive mix and plug-in parameter automation can be part of a region or track • Perform and mix from anywhere in the room using Logic Remote on iPad or iPhone • Produce simple lead sheets or orchestral scores with built-in Score editor Drum Production and Beat Making • Use Drum Machine Designer to build and perform your own custom kits • Program beats, bass lines and melodic parts using Step Sequencer • Create authentic acoustic, electronic, or hip-hop drum tracks using Drummer, a virtual session player and beat producer • Choose among 33 distinct drummers that can take your direction and perform millions of unique grooves Sampling • Use Sampler to quickly create and edit sophisticated multi-sampled instruments • Import a single audio file or record directly into Quick Sampler to instantly build a playable instrument Keyboards and Synths • Get inspired by collection of synths that provide analog, wavetable, FM, additive, granular, spectral, and modeling synthesis • Quickly find sounds or create unique new ones with Alchemy, a powerful sample manipulation synthesizer • Instantly turn a simple chord into a rich performance with the Arpeggiator • Transform simple ideas into elaborate performances using nine MIDI plug-ins • Play faithful models of classic organs, keyboards, and vintage synths Guitar and Bass Gear • Build your own guitar or bass rig with Amp Designer using vintage and modern amps, cabinets, and mics • Design a custom Pedalboard from a collection of delay, distortion, and modulation stompboxes Creative and Production Effects • Access a professional collection of vintage and modern delays, EQs and compressors • Play your sounds through a variety of realistic acoustic spaces or creative synthesized reverbs • Add movement to your tracks with a variety of modulation effects Sound Library • Over 4,300 instrument and effect patches • 1,800 meticulously sampled instruments • More than 10,000 Apple Loops in wide range of genres Compatibility • Expand your instrument and effects library with third-party Audio Units-compatible plug-ins • Share to GarageBand option allows you to remotely add new tracks to your Logic project from your iPhone or iPad via iCloud • Import and export XML to support Final Cut Pro X workflows • Export and share your songs directly to SoundCloud • Open projects from Logic 5 or later Storage Requirements 6GB available storage space for minimum install / 72GB storage space for full Sound Library installation 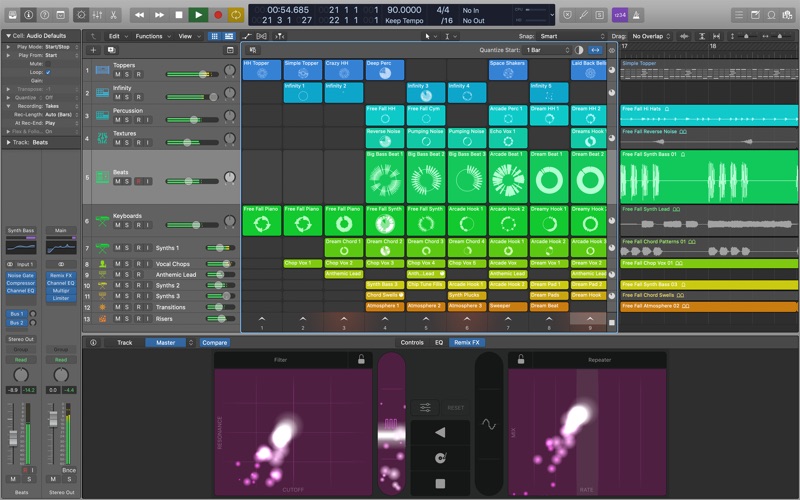 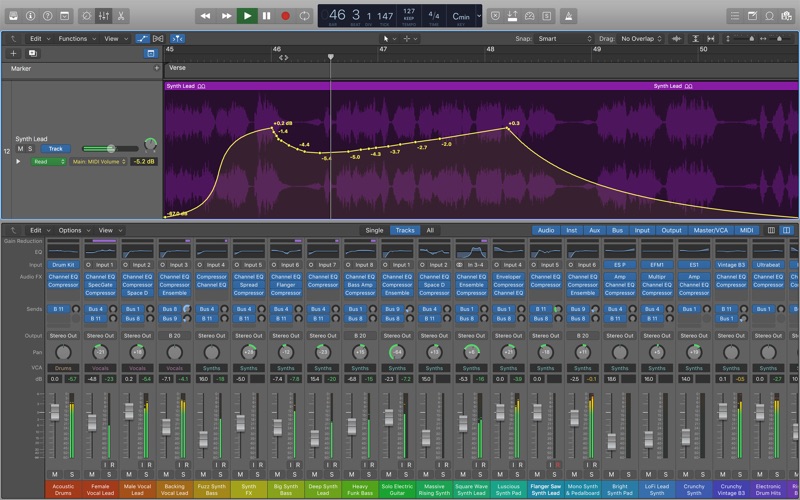 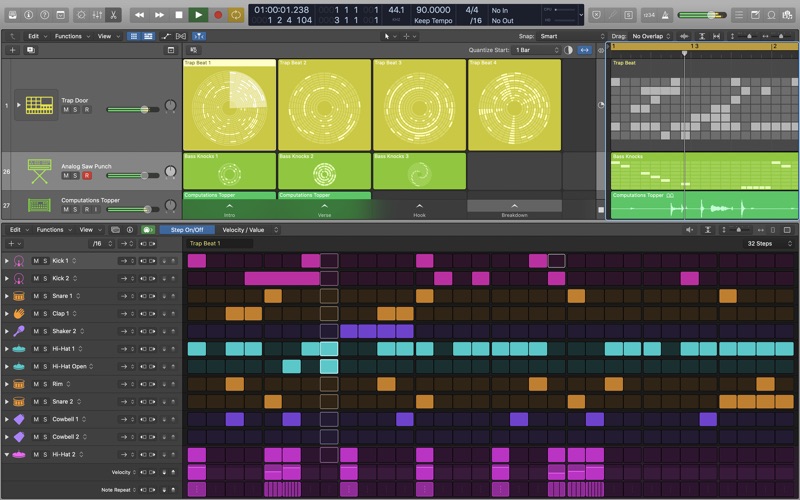 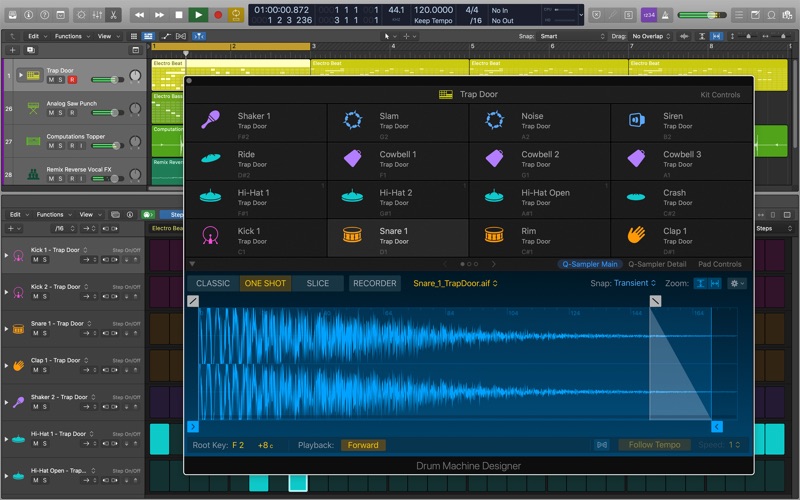 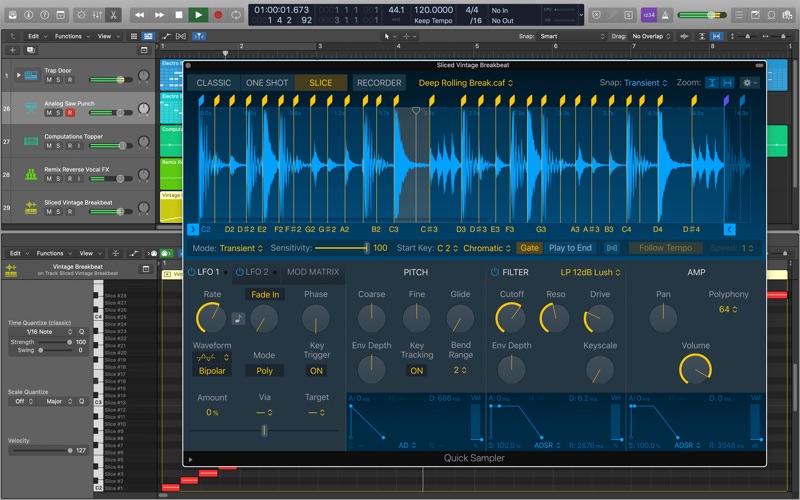 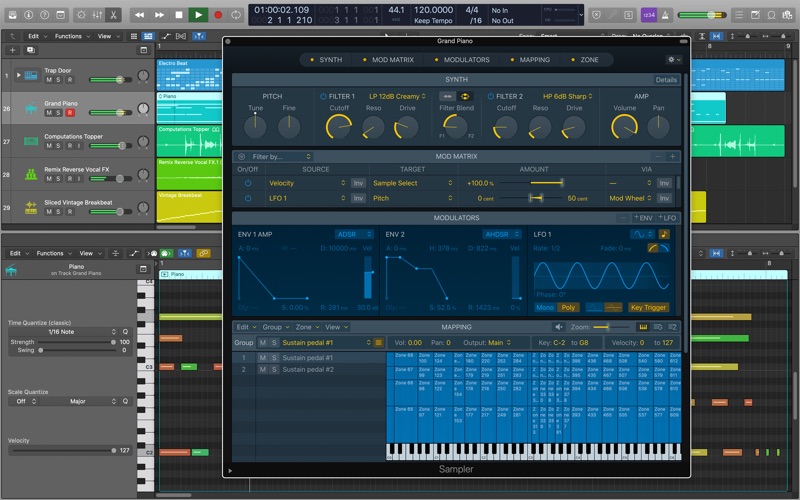 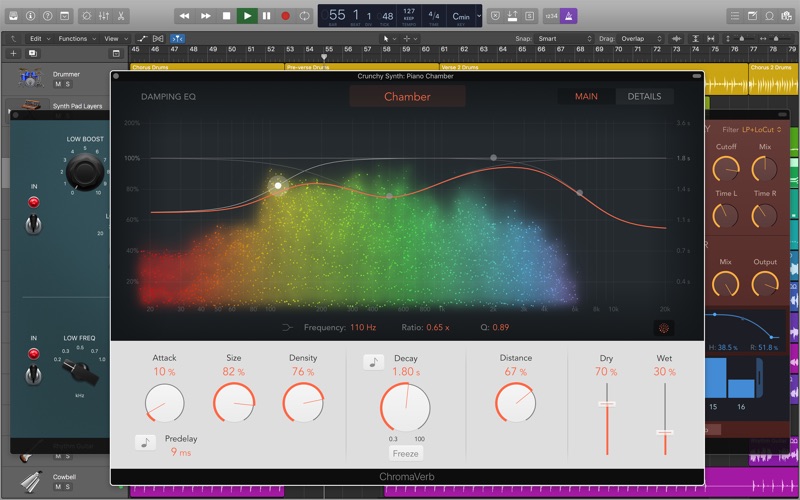 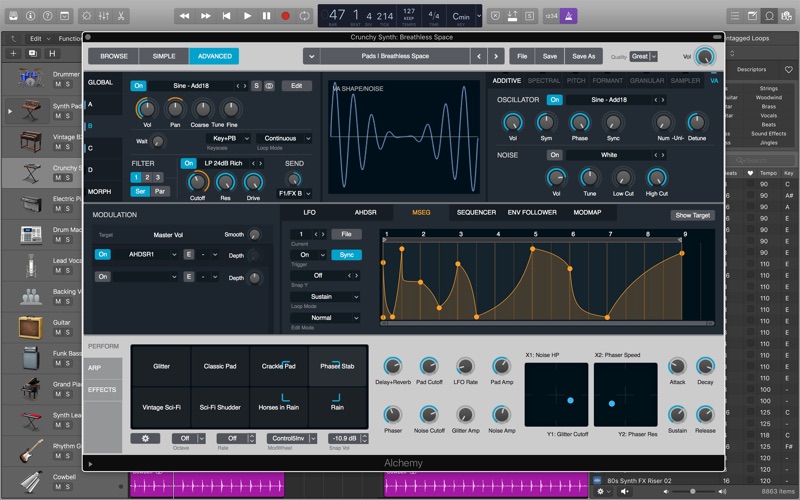 So many hit records and film tv gaming commercials are done on Logic. Billie Ellish hits for example, are done entirely on logic using logic plugins even. If you're recording a 5-6 piece country acoustic band, then go pro tools, but for anything else Logic is great. I've been using it for over 20 years, including music for Batman, Pokemon, The Bachelor, Energizer Bunny commercials, etc etc.
By yeehaw2u

Logic keeps deleting my audio files and when i go to recover them they end up in all of the wrong places. This has been going on for far too long im installing garageband or FL
By Mcdingus3

I say stupid for encouragemnt and not offense. This is my favorite DAW but sadly I lost my project file due to LOGIC not being able to save. The pop up "Logic was unable to save document" kept popping up and my friend closed logic and we checked the back up files and what I worked on for two days, 8hrs... is now gone. C'mon Logic people. Ya'll breaking my heart. I pay $200 and I'm thinking if ya'll even deserve my money.
By evoslick46

I am over it

I really tried to actually enjoy this DAW. Used it for nearly 5 years, and it feels like the team behind it is so beyond out of sync with what actually is happening in music. The plug ins are useless. Phat FX, Step FX, Remix FX. All useless. They are gimmicks. The step editor is deleted and still difficult to do basic things with. The same applies to the Sampler. I am genuinely actually asking Logic: TAKE NOTES FROM FL STUDIO AND ABLETON. Flex Pitch is just known for sucking. Transposing and warping files in Logic is a one way ticket to make them sound BAD. It is an art tool on Ableton and FL Studio. On Logic particularly - it is just b - a - d.
By La Jique

Glitchy but simply the best

i have been using logic since pro 7 and started of with Garageband. There is nothing like it out there.I don't think we understand the magnitude of what the EXS24 has become. In my opion, it is all over. The Drum synth is my favorite and combinned with the Quick Sample is all you need to create anything! This is every producer and creative musians dream and for the price, it is not matchable. I was one of those guys that paid 999 for logic 7 and upgraded to 9 but refused to pay another cent until now. Apple does need to fix the glitches and update the rest of the plugins but besides that, they have done the impossible and fulfilled my wants as a producer. For anyone switching to Logic Pro, I recommend you start with garage band especially the old version becausei in my opinion, the GUI is much more user friendly and very easy on the eye to comprehend. I give this a 5 star and I will do it again and again. Cheers to the Logic Pro team! You guys have done wonders.
By ezevic97

I love Logic Pro X. In my opinion it is very user friendly once you get the hang of it. I've been using it for years and I must say all the updates have made it an all-in-one powerhouse. The flex pitch gives you all the control you need to auto-tune and edit vocals (or anything) in great detail. The compressors and reverbs are fantasic and easy to use. So many useful tools and plugins. You just don't need to go and buy all those expensive plugins anymore to make great music. Highly recommend.
By David1988yo

Logic Pro X is great, but it has some issues

Logic Pro is really great and helpful, but some of the built in plugins need improvement. The pitch shifter is not good for any final mix. It has a bad static and feedback, and a bad delay, and I found a better one for free online. Also, the vocal transformer has the same problem. And i wish there was an option for no Apple loops to save storage. Other than that, it is a very good DAW with multiple different reverbs, echoes, ect. Very suggested.
By CompetitiveMultiplayer

I've used DAWs and notation software since 2005. The newest Logic Pro is by far the best DAW I've used and has great support working with Sibelius notation software for me to make High-quality audio renderings. The interface is smooth and intuitive, no extra fluff. The instrument libraries are extensive and easily modified to sound even better. I look forward to the point when Logic has full ambisonics capabilities like Pro-Tools and Reaper to make it the best DAW available.
By delta.sine

logic will not update but will continue to buffer
By flexnotgaytyler