Logic Pro is a complete collection of sophisticated creative tools for professional songwriting, beat making, editing, and mixing, built around a modern interface that’s designed to get results quickly and also deliver more power whenever it’s needed. Logic Pro includes a massive collection of instruments, effects, loops and samples, providing a complete toolkit to create amazing-sounding music. Professional Music Production • Use a complete set of spatial audio authoring tools that provide everything you need to mix and export your music for Dolby Atmos • Record and edit MIDI or audio using a comprehensive set of editors and tools • Keep takes organized with take folders and build comps quickly with Quick Swipe Comping • Track Alternatives let you create and switch between different playlists of regions and edits on a track • Fix out-of-tune vocals and change the melodies of recorded audio with Flex Pitch • Manipulate the timing and tempo of any recording with ease using Flex Time • Use Smart Tempo to import audio and have it automatically conform to your project BPM • Perform and mix from anywhere in the room using Logic Remote on iPad or iPhone • Produce simple lead sheets or orchestral scores with built-in Score editor Drum Production and Beat Making • Use Drum Machine Designer to build and perform your own custom kits • Program beats, bass lines and melodic parts using Step Sequencer • Create authentic acoustic, electronic, or hip-hop drum tracks using Drummer, a virtual session player and beat producer Sampling • Use Sampler to quickly create and edit sophisticated multi-sampled instruments • Import a single audio file or record directly into Quick Sampler to instantly build a playable instrument Keyboards and Synths • Get inspired by collection of synths that provide analog, wavetable, FM, additive, granular, spectral, and modeling synthesis • Quickly find sounds or create unique new ones with Alchemy, a powerful sample manipulation synthesizer • Instantly turn a simple chord into a rich performance with the Arpeggiator • Play faithful models of classic organs, keyboards, and vintage synths Guitar and Bass Gear • Build your own guitar or bass rig with Amp Designer using vintage and modern amps, cabinets, and mics • Design a custom Pedalboard from a collection of delay, distortion, and modulation stompboxes Creative and Production Effects • Access a professional collection of vintage and modern delays, EQs and compressors • Play your sounds through a variety of realistic acoustic spaces or creative synthesized reverbs • Add movement to your tracks with a variety of modulation effects Sound Library • Over 5,900 instrument and effect patches • 1,200 meticulously sampled instruments • More than 13,000 Apple Loops in wide range of genres Compatibility • Expand your instrument and effects library with third-party Audio Units-compatible plug-ins • Share to GarageBand option allows you to remotely add new tracks to your Logic project from your iPhone or iPad via iCloud • Import and export XML to support Final Cut Pro workflows • Export your spatial audio mix as a Dolby Atmos ADM file compatible with Apple Music • Export and share your songs directly to SoundCloud Storage Requirements 6GB available storage space for minimum install / 72GB storage space for full Sound Library installation 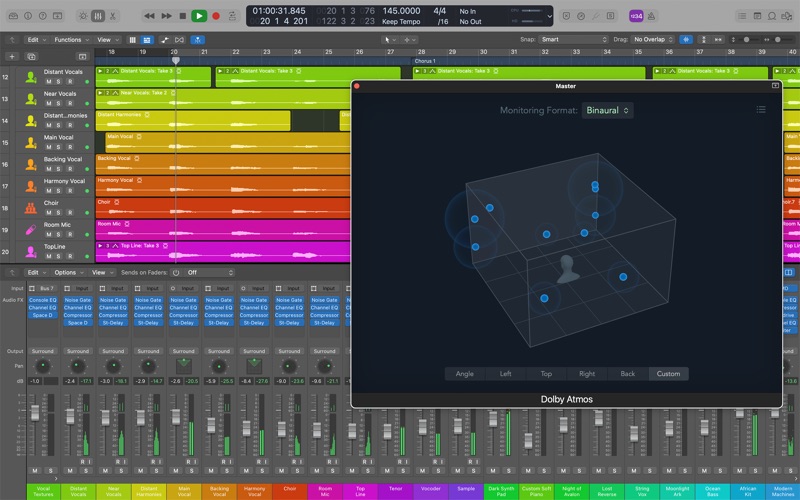 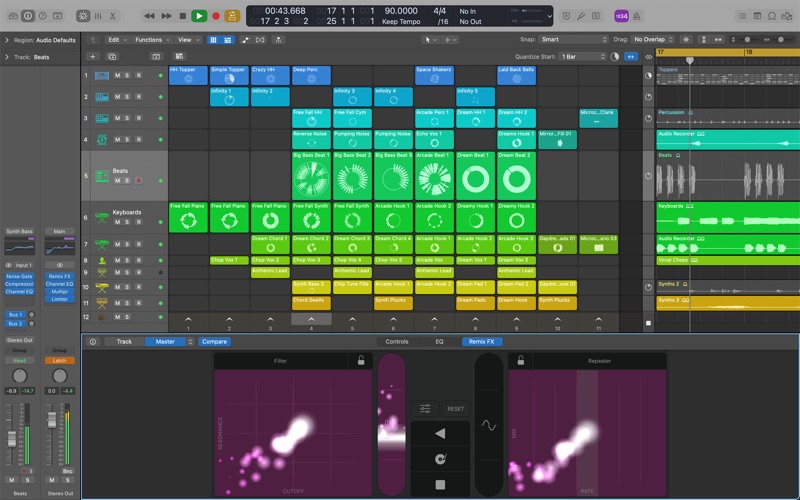 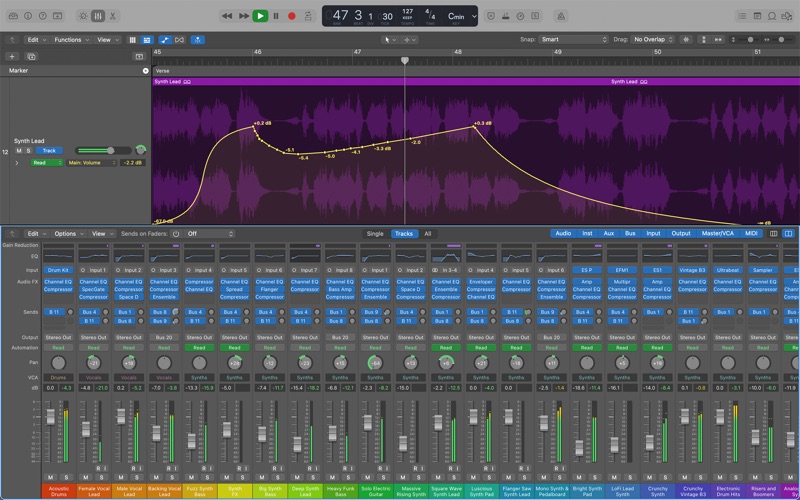 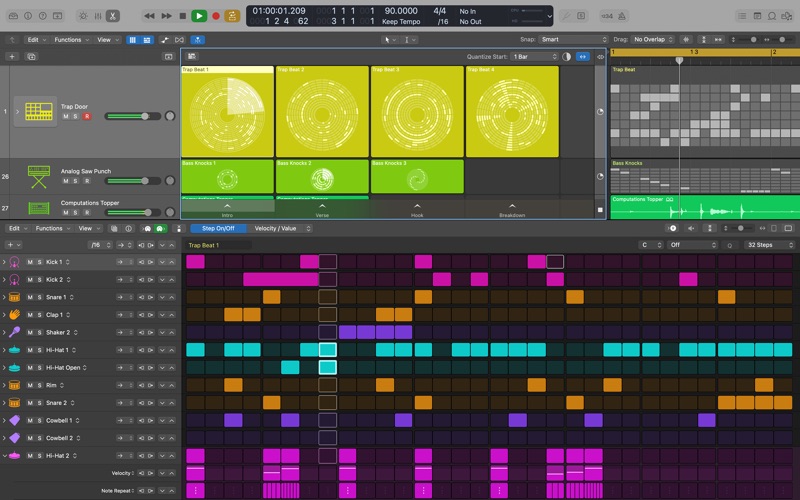 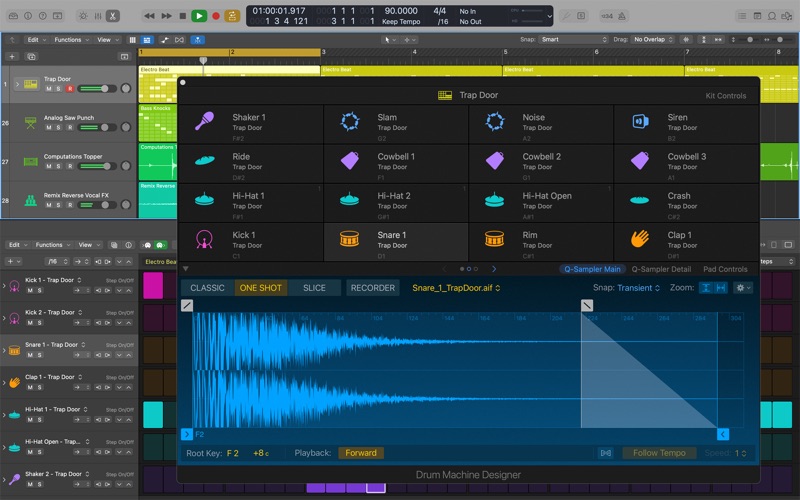 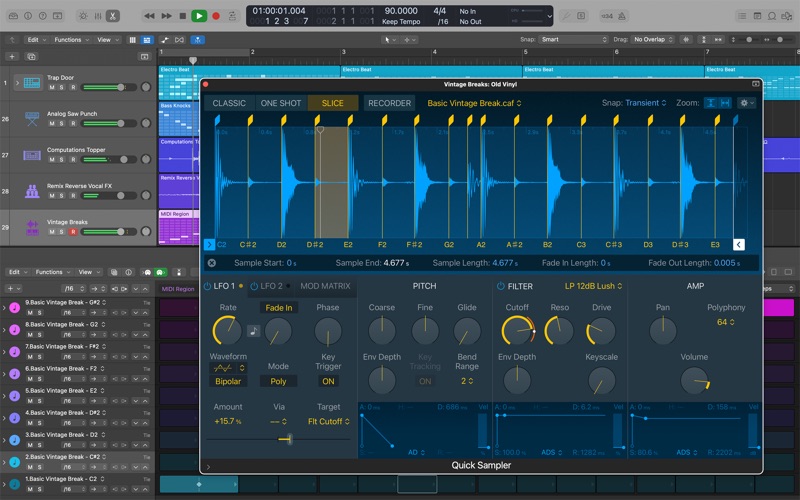 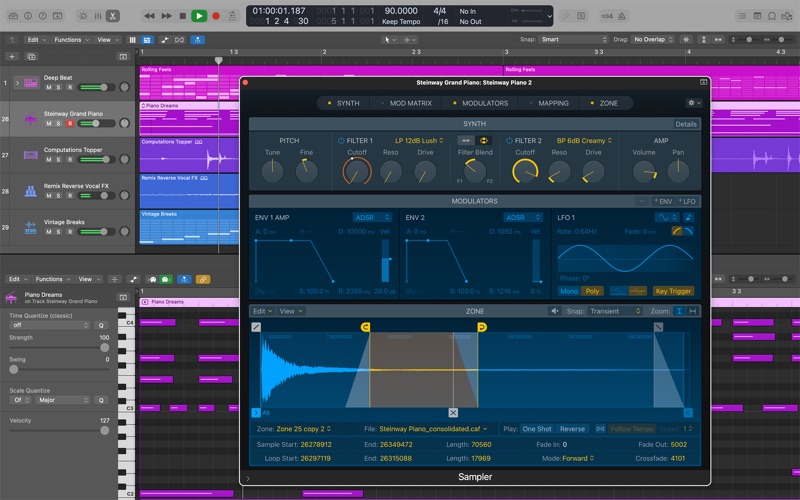 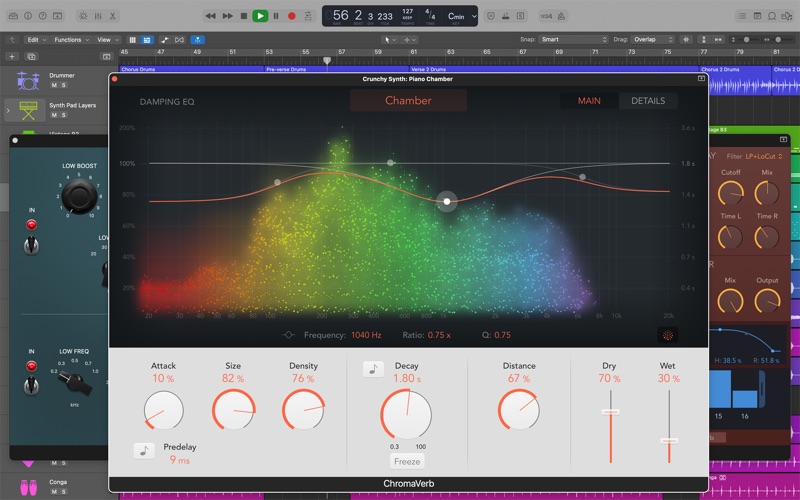 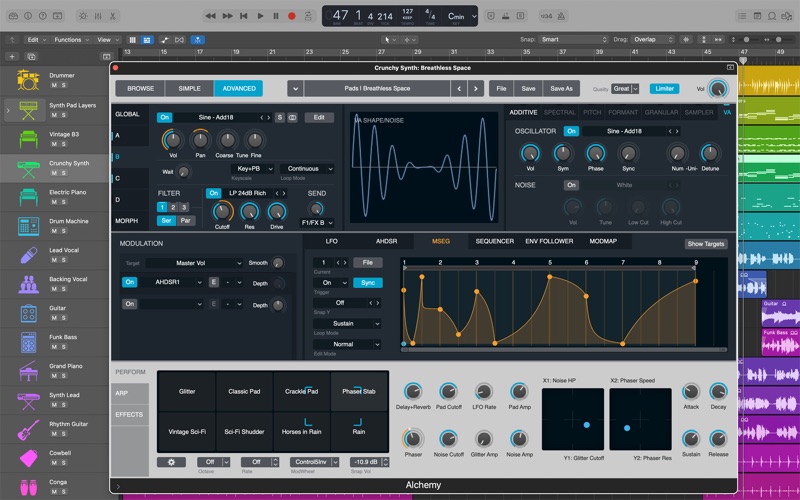 BUY IT U WONT REGRET
By SCARYLUCAS

Not an improvement from Garageband.

I found one thing about this that is better than Garageband, but many more things that are worse. Not all my plugins work in Logic even though they work in Garageband, you cannot transpose audio tracks, and dials for reverb, echo, and other settings are non-existent. Do not waste your money on this DAW. UPDATE: I see what people are saying about glitchiness. It also causes my computer to heat up to the extent that it burns me.
By vehbvoiefwv

LONGTIME LOGIC USERS UPDATE (beyond Logic Pro X 10.4.8) AT YOUR OWN RISK!

I’d held out on upgrading my previous iMac beyond Mojave over concerns about backwards compatibility with some 32-Bit apps, but recently replaced my old iMac with a Mac mini M1. I manually updated to the latest version of Logic Pro (10.6.4) after migrating from a TimeMachine backup and was DEVASTATED when I fired up the new version of Logic until, to my great relief, I realized I could roll back to 10.4.8 and preserve the use of HUNDREDS of EXS24 Sampler instruments I’d created by importing Recycle loops. For what reason I can’t fathom the Logic developers decided to do a massive overhaul and replace the EXS24 with a new plugin “Sampler” which, despite what look like some nice new features, destroyed backwards compatibility with my extensive personal library of Recycle-based sampler instruments and added insult to injury by doing away with the option to import Recycle files via the edit menu. Out of the handful of recently created Recycle based EXS24 sampler instruments that I was actually able to load successfully, there appeared to be no option to extract the original loop and insert it into the main track timeline as MIDI which practically renders these instruments as useless for arranging and editing purposes. Although I suspect a one star review would more likely catch the attention of the Logic developers, in all fairness Logic is just too good of a DAW not to write it off. Before this incident, I would’ve suggested Logic Pro as a no brainer for music producers with home much you get for your money out of the box, but this recent experience has dramatically shaken my confidence in the product. For the amount of blood sweat and tears music producers put into their work I would hope that the Logic developers would take more care in not throwing away critical functionality that harms longtime users, such as myself, in the process of refining and expanding the capabilities and features of Logic with each iteration. While this review may be excessively long for some, I hope it serves as a helpful warning and critique for others.
By _BennyB23_

the worst daw in the biz

I remember back in the day when only artists or producers heavily into MIDI went with the Logic. Pro Tools was for live music, Logic for MIDI. When Avid took over Digidesign, everything went downhill fast, and Logic became more appealing. Now we are at Logic Pro X, and the days of it being only for MIDI or sequencing are far gone. Any DAW that gives unlimited audio tracks is a serious plus. You are only limited by your computer's processor. Logic has come a long way, it is seemingly simple at times, but always in depth when you are editing or arranging. It comes LOADED. I mean LOOOOAAADDDEEDD with sounds, loops, instruments, presets, effects, tools, features, tricks, plugins, everything you would need from a DAW whether you are a DJ or a Djent artsist it can be done here. Unless you are Richard D. James, you will find everything you need to do what you want to do in creating, recording and mixing audio.
By G.Truelove

Formerly used ableton, but the pretty ui, good stock plugins, and feature set makes me love it
By jakevandee

I can't express how frustrating it is to have to use an external display, and even THEN it can be a hit or miss as far as being able to view the mixer window, or the arrangement window. I expected Apple to really knock this out of the park, but I find it difficult to work with such a problem.
By OhmieHomie13777