**Formerly Known as NCLEX RN Mastery** There’s no better way to learn all of the things you need to know to get through your classes, beat the NCLEX, or thrive in your new career as a nurse. My Mastery covers almost everything you’ll need to know at any stage in your career. For starters, if you haven’t kicked your NCLEX yet, you should live here in the lead up. It’s a one-stop, prep shop featuring: • More Than 3000+ NCLEX-like questions. • In-depth rationales created by nurse educators to offer extra context to every question. • Progress tracking to keep you moving toward your study goals. • Two-full NCLEX simulations (web only). • Possibility of Passing charts your readiness for the NCLEX. • 99.7% of our members pass on their first try, and we guarantee you will, too. But you know what we know: for a nurse, the NCLEX is only the beginning. My Mastery keeps the incoming lessons relevant regardless of where you’re at in your career. We have more questions, more quizzes, more methods of study, each tailored to meet your individual situation. • New audio and video lessons each week. • Interactive case studies. • Dozens of methods of study, from mnemonics to custom quizzes and more. An entire library of up-to-date explainers on 1000s of topics. In short, it’s everything you need to succeed with a bunch of hugely valuable extras sprinkled on top. And that’s why we stand by what we said at the beginning - there’s no better way to learn all the things you need to know to get to where you want to go. ------- Choose the plan that's right for you. Receive access to all questions and clinical content. NCLEX Prep: • 1 Month auto-renewing payment: $29.99 • 3 Month auto-renewing payment: $59.99 • Yearly auto-renewing payment: $119.99 Students: • 1 Month auto-renewing payment: $9.99 • Yearly auto-renewing payment: $79.99 Professional Nurses: • 1 Month auto-renewing payment: $9.99 • Yearly auto-renewing payment: $79.99 Your payment will be charged to your iTunes account at the time of purchase. Subscriptions automatically renew unless auto-renew is turned off 24-hours prior to the end of your subscription period. Your account will be charged within 24-hours of the end of your current subscription period, and you’ll receive a receipt for the cost of the renewal. To manage your renewal settings, head to the Account Settings once your purchase has been confirmed. All prices are for United States customers. Pricing in other countries may vary, and charges may be converted to local currency depending on your country of residence. If you have questions or comments, email us any time: nursing@hltcorp.com or call 319-237-7162. Privacy Policy - http://builtbyhlt.com/privacy Terms and Conditions - http://builtbyhlt.com/EULA 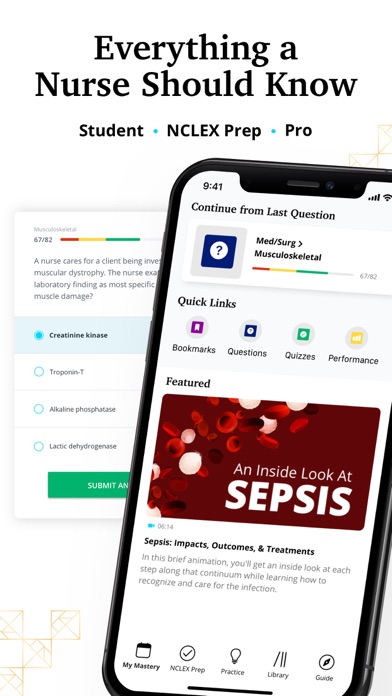 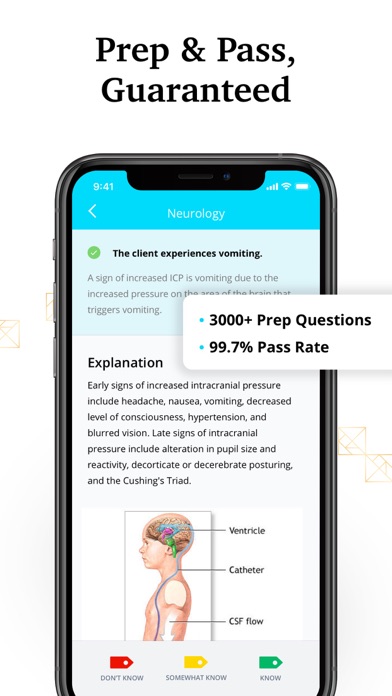 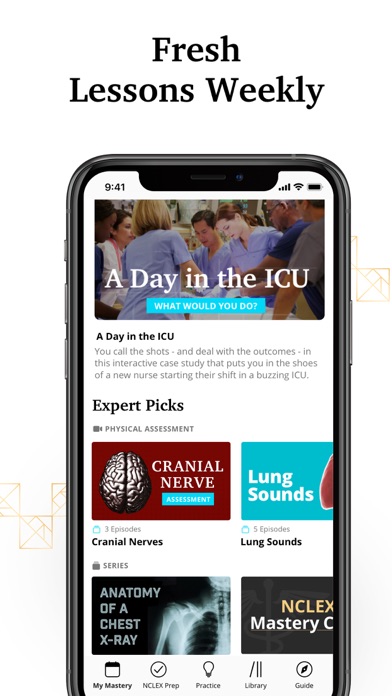 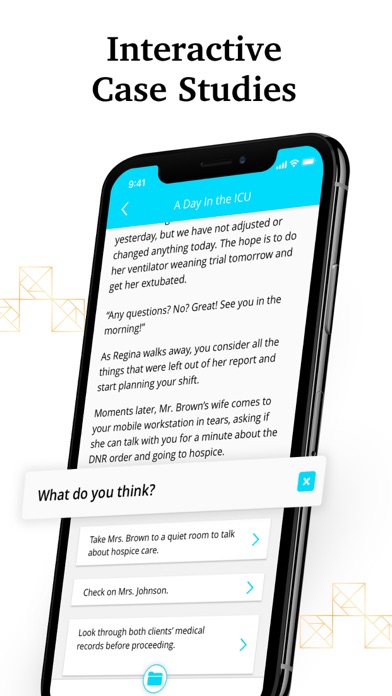 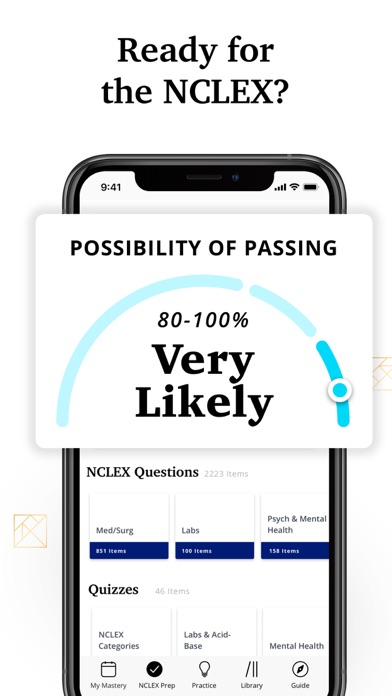 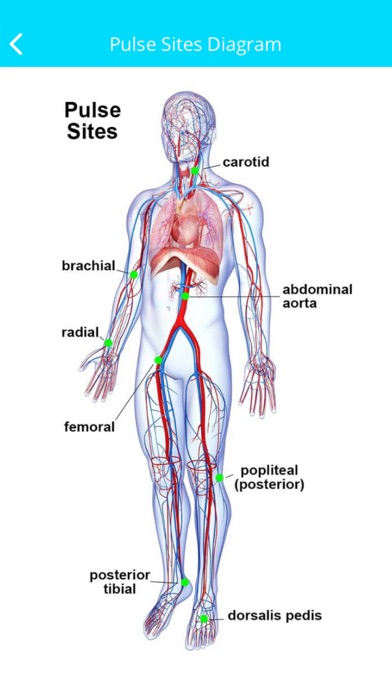 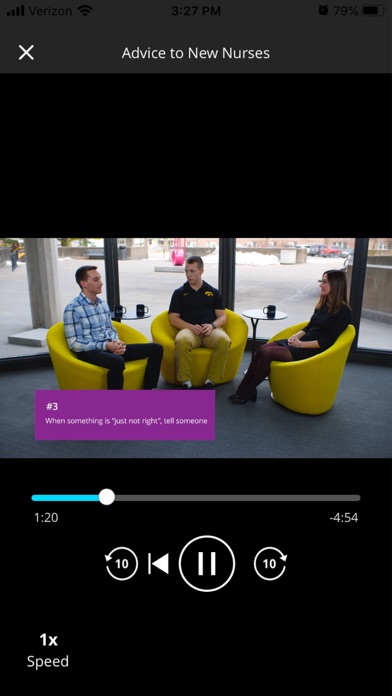 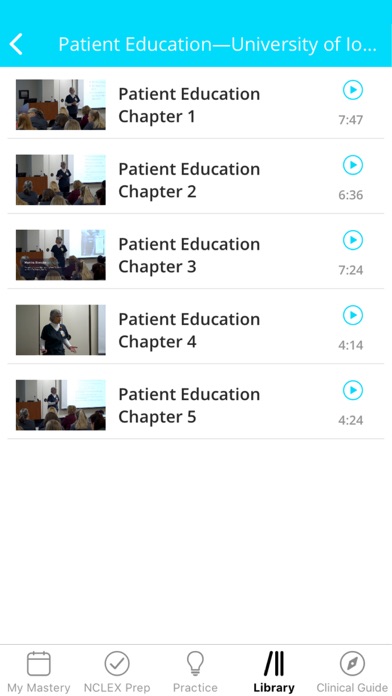 I usually NEVER write reviews but after I have used this app for my NCLEX-PN (Oct 2016) and now NCLEX-RN (June 2021) passed both times on the first try using only this app. I love the questions and rationales, they were very close to the questions I got on both exams. The NCLEX simulations are great and mirror how NCLEX is set up.. thank you and I have always recommended my classmates or anyone to download and PAY for this app because it is very worth the money.
By NurseJanae

THIS APP WILL STEAL YOUR MONEY

Charged before my free trial ended

App boasts a “7 day free trial” but then charges your card as soon as you purchase. Very annoyed as I wanted to trial the app before purchasing for THREE months (I only need it for 1 month). Changed my subscription via Apple and charged my card AGAIN.
By Kelsey Barnard

Probability of passing is messed up

This app is ok, I like the rationales. Some questions are a little ridiculous but whatever. However, how is it going to tell me I had a 46% chance of passing the nclex, and then the next update tell me I have a 9% chance. How is that even possible
By Dmarie1993684027

I downloaded this app to provide me with questions that I could answer anywhere and at anytime. I thought the app was very helpful in providing me with NCLEX style questions as well as very in depth rationales. If anyone is looking for a resource that can provide them with practice answering NCLEX style questions without paying a fortune for UWorld, this is a great app to use. The only reason I am giving a 4 star rating is because of their probability of passing feature. While answering questions on the app it told me I only had a 6% chance of passing and also gave my friend who had the app a very low chance of passing which wasn’t very accurate if we both passed the NCLEX-RN on the first try. So a PSA to all those who have a very low probability of passing percentage on this app, it is NOT accurate.
By Seven soliders

Helpful app at times. But after doing numerous questions it predicted that I would not pass the nclex and that was not the case for me. So I think the system seems to be inaccurate compared to uworld.
By kait0326

It’s very useful however I learn better when I can read the audio questions while being asked them, captions would help me greatly and I think others would also benefit from this feature.
By SurelySavvy

I’m no longer able to access questions & topics that were just on the app a week ago. I’ve only got 3 topics areas & several videos to review. I’ve tried everything I could think of to reset it, but it’s still the same. I even redownloaded the other mastery app to see if it was the same on that one. Same thing, expect there are not even half the questions that were once available. I’m not paying money for something that is giving me 1/4 of what I originally agreed to pay for. This is so upsetting because I used to love this app. **Trying to find a way to get a hold of the company for a refund after resubscribing, finding NOTHING useful, & deleting the app after 1 hour but there is NOTHING on the website to do so.
By ChelB18

This app is awesome! the amount of questions and organization is super convenient and easy use on the go. My only suggestions would be to include images of the disease or instruments used on every question. Another thing I would include is prefix and suffix of medications and how they are organized in classes! Other then that best NCLEX APP for the price you are paying!
By Nonenonenone111none