Return to the classic medieval tale of magic, monsters and friendship with FINAL FANTASY V! Twenty years after the original FINAL FANTASY V released in Japan, the classic RPG has found its way to mobile devices! Embark on an epic adventure as four heroes driven together by fate: Bartz and his chocobo companion, Princess Lenna of Castle Tycoon, the mysterious Galuf, and the pirate captain Faris. The crystals that bring peace and prosperity to the world – earth, water, fire, and wind – have lost their power and are on the verge of destruction. •Customize characters with an unprecedented degree of freedom with the job and ability system – 26 unique job classes! •Veteran character designer Kazuko Shibuya has returned to recreate the characters and graphics for a completely enhanced mobile experience! •Touch-screen controls and active-time battle system are optimized for fluid combat on mobile devices •This new version also includes “The Sealed Temple” from the 2006 release, as well as the Tetsuya Nomura-designed optional boss Enuo, and an extraordinary soundtrack •Game Center support and plenty of achievements to be earned. 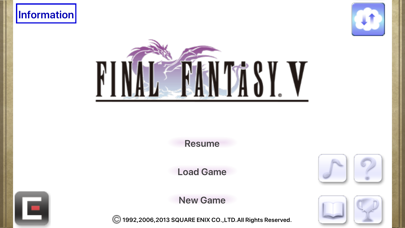 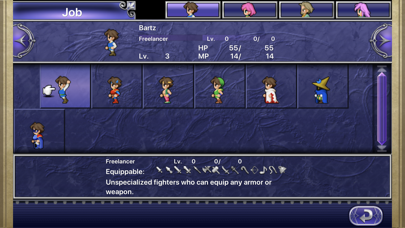 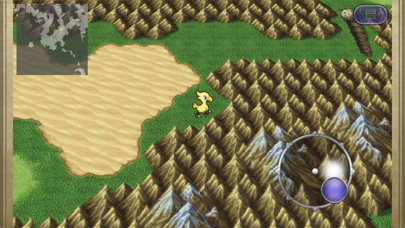 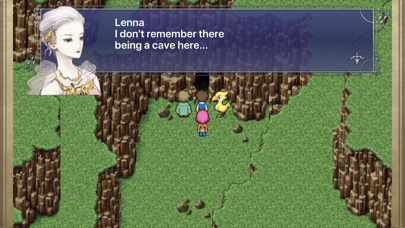 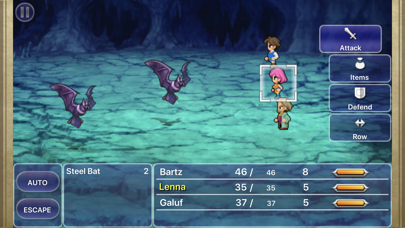 worst port of a good game

While the core game itself is very excellent and even a bad port can't change that, the changes made to this version put it very low on the list of versions to try. This doesn't just stop at the graphics, which vary erratically from okay upscales to total garbage that lose all of the charm of the originals, but also extends to gameplay "fixes" that actively remove or negate boss vulnerabilities that were left in deliberately. Between this and the awkwardness of controlling the game I really cannot recommend this version of FFV unless you have no other options. At least you can mod the PC release (which is otherwise identical) to be slightly less ugly. The only benefit of this version is that two of the weaker classes are slightly buffed due to minor changes to how they work, but it's still not enough to make this a good choice.
By EffYewApple

no description provided LOL Ok so this game the best the best pancakes the food service the food coffee coffee But for real good game, but leveling up takes a ton of grinding, a training area would be nice. :)
By DartKrafterMaster

They replaced the ugly blue bars with tan bars. Game still doesn’t fit the screen, FF6 is much nicer.
By WJCK5

I changed it to 5 stars
By No_Name7

Was hoping for FF6 treatment

FF6 looks pretty good with the iPhone X update. This only got ugly tan bars on the sides. I would prefer just plain black bars. Don’t know where the idea came to put ugly bars on games but it needs to stop. None of them look good. Including FF6’s
By AstralDarkstar

THANK YOU FOR THE UPDATE!!! I changed my review from 1 to 5 stars since this now fits my iPad Pro screen properly! This is a fabulous and severely underrated game! The story is a bit lame but the gameplay and job system and bonus dungeon more than make up for it.
By Mindflayer2775

I actually liked this game, I don’t know what these people are talking about, the job system is better handled, the story was a little goofy, and light toned, and I enjoyed every minute of it, I have iPhone 7 so it’s playable to me.
By ThunderKeyblade

Unplayable because of how it looks

FFV is obviously an amazing game but this only applies to this version. The art is so horrendously bad that it renders the game completely unplayable. It looks like it was drawn by a child. I can not fathom why they would smooth over the amazing pixel art of the original. This is the same case with Final fantasy 1,2,5 and 6 on IOS and like an idiot (and a major fan of all of the original FF series) I bought and payed for all of them but the only ones playable are 3, 4, 7, 9 and tactics. I wish I could get money back for the rest as these are by far the worst versions and they aren’t cheap.
By Matthew savant

Can we get a screen size update? You’d think you’d be on top of this.
By Ridgeline2333

Terrific port. Not the best FF story, but the bonkers job system makes up for it. Only gripe is that the game does not fill the screen on newer devices like iPad Pro or iPhone XS Max.
By thalter