Welcome casino lover, you’re in for a real treat with Caesars Slots! Experience a casino style game on a whole other level and immerse yourself in a world that’s constantly changing and piquing your interest. You won’t want to miss a beat in this casino atmosphere! What’s in it for you, when it comes to Caesars Slots? There’s only one real word to describe it to our casino players: entertainment. Whether you’re spinning in one of your favorite slot games (out of the 250+ we have available) or following the extra paths Caesars Slots lays out for its fellow “Caesars”, you won’t be disappointed when you play. “What paths could a casino slots game take me on” you may wonder? Let us illuminate the marvelous journeys you can expect in our super fun casino slots game: A story of collectibles that helps you reach amazing bonuses as you strive to complete the collection and solve the mysteries as you spin, spin, and win! Join our “Reel Travelers” couple through a thematic of casino slot games, each with specific slot missions that once completed, reward you with fantastic bonuses and more excitement jumping from slot to slot. Experience what it means to decorate “My Fortune Palace” and become the grand ruler of all Palace bonuses once you complete adorning each of the rooms available in our casino slots game. Of course, our game would be incomplete without Freddy – our beloved “Freddy’s Food Trucks” bonus feature lets you master special dishes that reward you with prizes and a savory experience that’s bound to leave your mouth watering. Looking for a friend? Say hello to our precious “Prize Pet”! Grow them and spoil’em to the max with super fun treats and special features that reward you with even more bonuses and prizes in our social casino game. Feeling photo savvy? Join Amelia and her ostrich in “My Safari Snaps” and chase after fun and cute photo ops that provide a sweet bonus each time so you can keep enjoying our casino slots. If all of this still isn’t enough, it’s time to head on over to the game and discover even more features that our players love in our casino game... and so will you! YOUTUBE: https://www.youtube.com/channel/UC6UOjt2Z-ZEaoeCcpRin6sw FACEBOOK: https://www.facebook.com/CaesarsSlotss INSTAGRAM: https://www.instagram.com/caesars_slots/ Caesars Slots is intended for those 21 and older for amusement purposes only and does not offer ‘real money’ gambling, or an opportunity to win real money or real prizes based on game play. Playing or success in this game does not imply future success at ‘real money’ gambling. Caesars Slots does not require payment to download and play, but it also allows you to purchase virtual items with real money inside the game. You can disable in-app purchases in your device’s settings. Caesars Slots may also contain advertising. You may require an internet connection to play Caesars Slots and access its social features. You can also find more information about the functionality, compatibility and interoperability of Caesars Slots in the above description and additional app store information. By downloading this game, you agree to future game updates as released on your app store or social network. You may choose to update this game, but if you do not update, your game experience and functionalities may be reduced. Terms of Service: https://www.playtika.com/terms-service/ Privacy Notice: https://www.playtika.com/privacy-notice/ 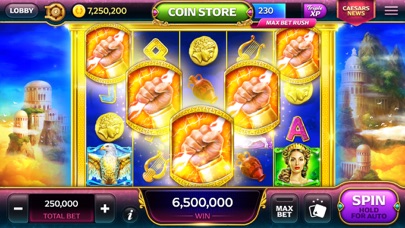 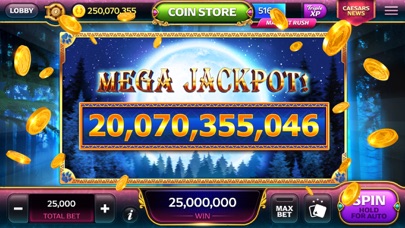 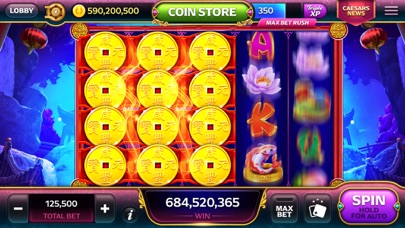 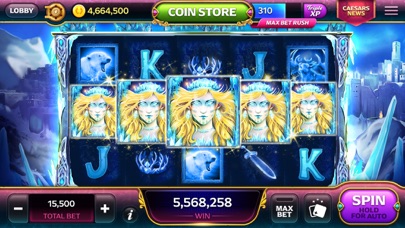 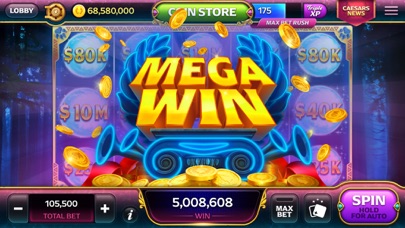 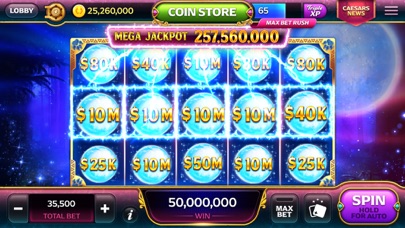 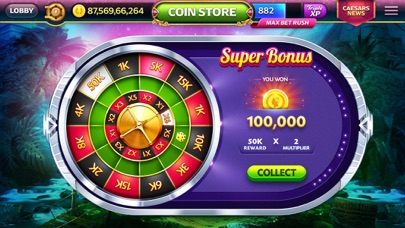 Played for yrs but new changes take away fun and profitable additions, chests, free spins. Have not been able to do crap with turtle in weeks. Update was awful! Update now pop ups change the game spins oh my 100% does not inspire buying. Did have a good win but game “froze but was deducting not made spins lost all of 140m feel cheated still! Nothing changed even crappier 9/25/22
By EGER2!

Hello😉, if you want tо play at a gооd casino that also pays, enter this name "YDK765" into a Gооgle search. I’ve been playing Caesars for a few years now. I’ve had at least a good ten casino apps on my phone through the years and have played at about 20 other casinos on line. I have played some where it’s win win win. All the time. Others where there are too many interruptions to buy coins or to download other apps or you have to watch constant videos forced on you to receive coins. And then there are the casino apps where they have all these Inter-connected games and tasks ( which is fine as long as they don’t over shadow the actual slot games you are playing) that are too much. They give a minute of slot play and 5 mins of tasking. The point is is that I no longer play at any other casino except for Caesars. I think it is the very best of all of them. Everything is well balanced and the side tasks are structured perfectly so they add excitement to and not take away from your slot play. I think I am at the Gold Status Level now. It’s taken me a long time to get there and there are still 3 or 4 levels ahead. They don’t make anything too easy. It’s a thinking players site but not overly complex. After all this is entertainment. They know when to give it and when to take it away if you are not careful. So it’s always exciting and yes sometimes frustrating but that’s why it’s sо much fun. I’ve played sites where u just keep winning and you can’t lose even if you try. That is boring. Fоr me Caesars is the BEST.
By germanbshd

If you like spending money then this is the game for you. I’m a player that does not mind spending a little here and there as long as I have some fun. The problem here, is lately it doesn’t matter if I spend or not….the one thing for certain is the last week has been a terrible waste of time and I’m close to deleting the app. Having started playing a few years ago and seeing just how money focused this game has become is very disappointing. Feels way to much like a real casino…absolutely terrible payouts and luck but no chance to win your money back. If you play this game, I wish you the best of luck….you are going to need it.
By takeachanc3

I love this game
By rubynah

Update: to your response we know this isn’t a real game where you win money and it’s for pure entertainment, but to say it’s random is a lie. Your algorithm for the game is set up to eat coins and make people purchase coins if you want to play for more then 5 mins. There’s no way any random luck is 300 spins without a single hit unless your algorithm is set up to drain coins. Don’t matter if you buy coins or save them from your daily’s I have not had any big wins at all. The new game heist ate 15 billion coins without a single win and I spun over 300 times. They say it’s random but there’s no way you go to a real casino and never hit anything in 300 spins. Fraudulent game
By 🤦🏻🤷🏻👍🏻

No fun. No hits. Unless your buy coins.

I enjoy every moment playing more than 50 different games. I rather play video than be addicted to social media this is much more sane…thank you!
By DoralisM38

This app just stole all my coin! And I can’t even get in touch with the developer through that marvelous Microsoft service portal.
By Roroberg

There is no winning in this game!

Warning to all: There is no winning in this game! Things just make no sense to me. Lost more than 30 billion coins in three days and for what? The winning reward of the weekly Daily Task Bar is only 2 billion coins! And the game never let you win the Jack Pot from the Pet wheel. Most of the daily goals and Pet milestones are impossible to achieve. Free spins are hard to come by, and the winnings are minimal even when I hit it. This game is becoming more and more greedy. The Star Shop tripled their prices comparing to the similar game a few months ago. And now you could only win the chests through the daily missions or buy them. Before, you could win the chests just by spinning. Now when I earned a Ace chest, it was always a duplicate one. I didn’t even get any new items for months. It was hopeless. At my level, I need to spin at least 30 million each spin to just have a chance of getting the gold nuggets. And each Big or Mega win will only earn me just ONE gold nugget! Before, I could always get to the spin at the palace. But this time around, I can never get to the wheel. It is hopeless. So, it is not just because of your luck on the random generator as they say that keeps you loosing. It is mainly because many of the game plays that prevent you from winning. There are simply not enough ways to make up for the losses. I’ve spent a small fortune on the game because I understand that the people work on the game need to get paid. But there is no fun in this game anymore. No winning, only loosing. It used to be fun, but no more. It used to be entertaining, but no more. So why would I play a slot game that will never let me win?
By Anonymous Player One

Numbers are going down?

My crap is going down. No clue!
By Cantfindafrickinnickname

Board Kings: Dice Board Games