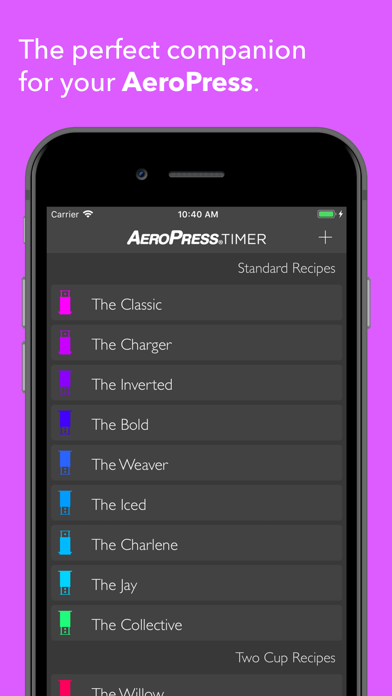 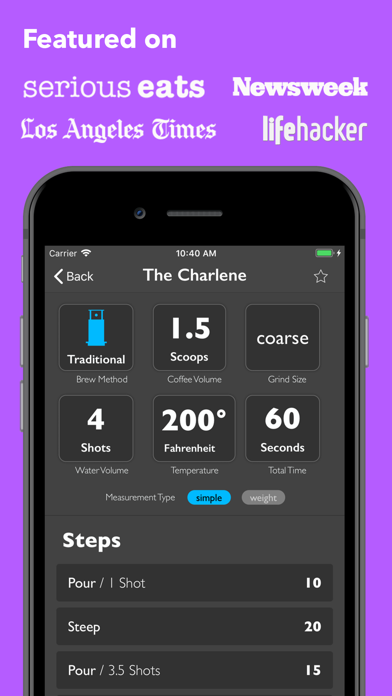 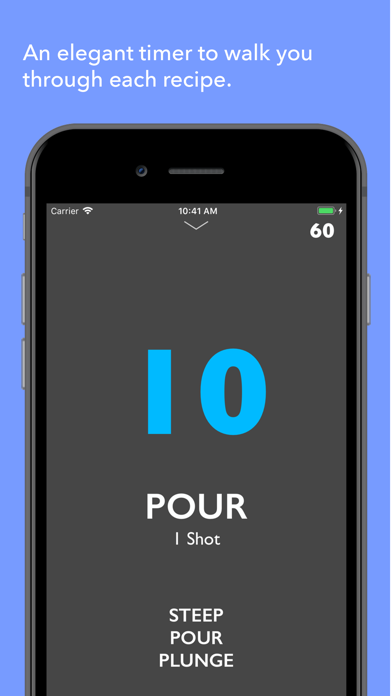 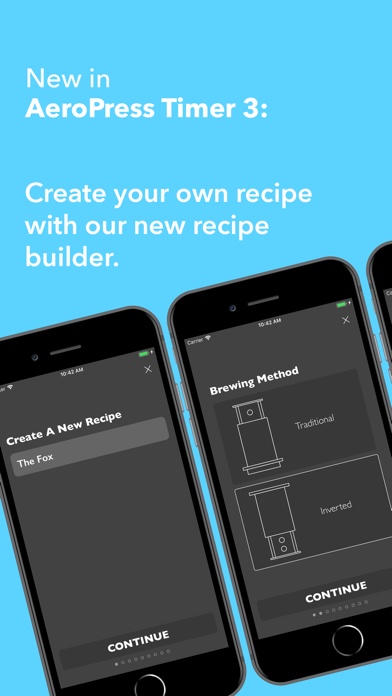 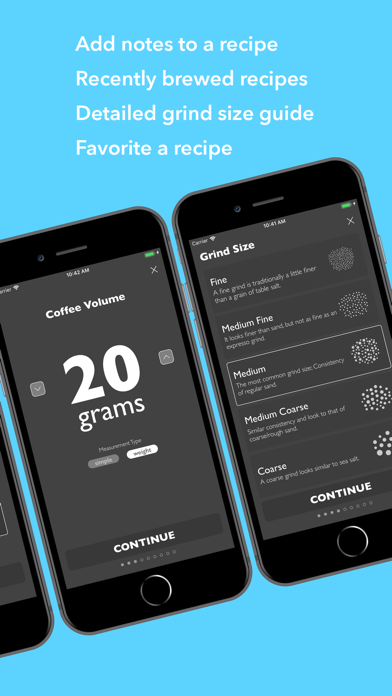 There is no way to add a bloom stage for custom recipes. Many of the recipes pre-loaded have multiple pour stages for a bloom, but this is not possible to have for the custom recipes. You cannot add a second pour, stir, or steep stage into your recipe when a bloom would require this. Given with how many recipes have this as a basic feature, this oversight is a poor one. I would not purchase this app again.
By MattEAppReview

Works well. It did crash while trying to create a recipe. I highly recommend adding a step for blooming as that seems pretty common. Currently custom recipes don’t show you what needs to be done at each step which is very frustrating and makes it useless. Great aesthetic and feel though. Edit: Wish I could edit recipes without having to recreate.
By Therealseanism

Wonderful app, extremely thankful for this great app. It works super well and I love all the recipes. 👍
By hch3psa

ABANDONED APP. Do NOT buy

The developer has not updated in over a year. Normally this wouldn’t be an issue for an app as simple as this. But it’s slow to start, crashes, and worst of all used 15% of battery (iPhone 11, latest update) in just 5 minutes... for a coffee timer. Save your $5 and look elsewhere. This app is abandoned.
By Byukk

Missing features for such an expensive app

For an expensive app you’d think some pretty basic features would be included. Like how about the ability to edit a recipe? Or what about the ability to add water in multiple stages for a bloom? If I’m creating a recipe and want to add part of the water then stir then add the rest of the water I’m out of luck. What if I want to add something to the recipe other than coffee or water (like a specific amount of ice?) no luck there either.
By loganvw18

The app is useful for the recipes already listed within. But, the app shuts off everytime I try to create my own. It specifically shuts off after I enter the degree (in Celcius). I wish I was able to enter the temperature in Celcius instead of Farenheit for it to work.
By joeukno

Crashes when creating a recipe

The tool as a recipe repository is good, however, the recipes are not updated, nor new recipes are being added. Furthermore, whenever I try to add a new recipe, the app crashes. As of now, the app is not recommended unless a new update would fix these issues.
By HausAlK

This is not a well thought out app there is no way to modify a custom recipe, to make a single change you have to create a complete new recipe, which is a huge waste of time It also does not give you total brew times either in the pre-made recipes or custom ones as it only counts fill and steep times, not press or stir or flip times in the total needs some major updates
By Craig "Skygzr"

Great UI and UX but buggy

Crashes every time I try to complete making my own recipe. Hope this can be fixed soon!
By mnldvt

The recipes are a good collection, although some are inaccurate (Tim Wendelboe’s, for example). Design is well thought out, too. Missing basic features, such as the ability to edit a recipe, even a recipe you yourself have created. Also, even though both volume measurements support a simple/weight setting, there is no such setting for grind. It would nice to be able to, for example, for simple say “Fine” but for the specific setting say “20” for the exact grind size on your grinder. At this point, it’s not a $5 app. But I would have been happy with a $1-2 price.
By brdoco