*YOU MUST GIVE GIVE QSEER PERMISSION TO ACCESS THE CAMERA IN ORDER TO USE THIS APP* Wonder what’s in the new coupon barcodes? Had a coupon rejected or fail to double for no reason? Now there’s QSeer, the amazing app that reads these codes and reveals all hidden terms. QSeer is a must-have, money-saving... ... tool for all couponers, from the occasional user to the accomplished extreme couponing master. The new barcodes on coupons convert all of the important terms into a machine-readable code. The problem for couponers is that these codes are usually different from what is written in English! Until QSeer, couponers were at the mercy of the codes, as you had no way of knowing what the barcodes actually said. Manufacturers designed this system deliberately so humans would not be able to interpret the codes. QSeer unleashes the power of the iPhone to give you the ability to see what information is hidden in these barcodes and how to use those details to minimize your grocery bill. QSeer not only reads the new barcodes, it converts them into plain English that you can use to plan your shopping. QSeer helps you match a coupon to the right product size and variety, eliminating those nasty check-out surprises. And it couldn’t be easier to use, as it works automatically with the touch of a single button! QSeer delivers powerful benefits, such as: ◆ An incredibly easy-to-use app. Press one button, and then hold your iPhone over the coupon barcodes. QSeer does all the rest automatically! While your download does include a professional tutorial, you really will not need it. But if there’s anything that is not clear to you, help is one click away. ◆ Knowing whether your coupons can double or triple (at stores that offer this program). QSeer flashes an alert if a coupon contains a hidden code that suppresses the multiplying bonus! ◆ Identifying whether a coupon is restricted to particular stores or if it can be redeemed anywhere. ◆ Understanding the true purchase requirements. Using proprietary QSeer databases, QSeer is able to match over 98% of coupons to actual store products, so you can plan your shopping with confidence. ◆ Alerting you to errors in the barcode that can cause problems at checkout. The new barcodes are so complicated that more than half have some sort of error. QSeer alerts you to the errors that are likely to prevent a coupon from scanning properly. ◆ Recognizing data privacy concerns. The new coupon codes allow manufacturers to track when you use your coupons and exactly what you buy. They can hide a customer number, an IP address, or even your Social Security number in the barcodes. QSeer will alert you when a coupon contains one of these tracking codes. Note that QSeer does not ask you for any personal info – we only alert you when it is there! ◆ Working anywhere with no data usage. QSeer will not run up your data usage, because it doesn’t need Internet access to operate. It will even automatically activate your iPhone’s flash to work in the dark! QSeer was built by a team that includes two extreme couponers, a pair of Mathematical geniuses, and a marketing expert who formerly designed coupons for Kraft Foods. QSeer is designed for the needs of couponers by people who truly are experts with coupons. QSeer is a coupon barcode interpreter. QSeer only reveals the information that is encoded on a coupon without any moral judgment or redemption suggestions. QSeer is not designed to be used as a vehicle for the misredemption of any coupons. QSeer Users are advised to read our End User Licensing Agreement (EULA) for further details. 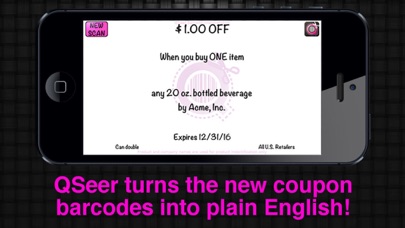 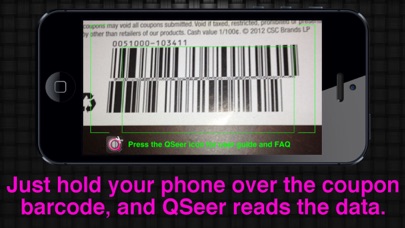 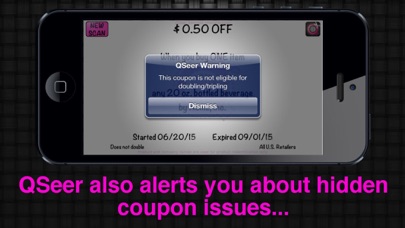 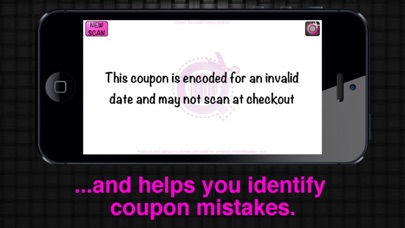 Not working on the iPhone 14

This app has worked for years, but we just upgraded to the iPhone 14 and the app won’t work AT ALL! I keep looking for an update, but nothing. If you have a newer phone, DO NOT BUY THIS APP until they fix the issue.
By boo4andrew

Good app but one flaw

This app does what it advertises it scans coupons and tells you all the sometimes hidden information about them… that said this app would be sooo much better if the scanning was improved. This could even be done with a simple thing like allowing the app to access the macro camera on phones not just the main camera because the coupons it struggles to scan the most are small barcodes and being able to use the macro lens to get in close to the bar code without it being blurry would likely improve scanning A LOT.
By Dirtbikerider987

I’ve had this Ap almost a week. It won’t scan, no response from help desk. I’ve tried deleting & downloading again, still nothing.
By TSimmons33

I thought this was a great app to have but it’s been useless since I purchased it b/c every time I try to scan a coupon it cuts off. I’ve deleted the app and reinstalled and it still does it. Please fix that, I paid for it and it should work properly.
By Pt356

usually it works well, but for some specific coupons when you scan them, the app will crash and jump out. And if you scan another one it works well.
By 哞哞哞哞哞扭扭扭

Purchased this app last year august worked perfectly fine . Now I can’t even scan a coupon because when I do it kicks me off the app completely . FIX THIS ! There’s no way an app I paid for should be working this way .
By TrackStar_101

I have had it for few years. About 6 mos ago it stopped working. It would just shut down during a scan. Contacted developer, and never heard back!!!
By IK1264

Keeps crashing every time I scan a q now. Super unfortunate bc this was my favorite app. I use it on the iPhone 13 Pro and originally had no issues but it all started once I scanned an IP q, now it won’t scan anything.
By Bxthxnyy

Since last update it no longer works. Closes out every barcode I scan
By shayreneeq123

I have used this app for years. I just upgraded from an iPhone xsmax to a 12promax. I didn’t read the reviews before hand. I used the app even on android (so I’ve paid for it 2 different times) and now I can’t get it to scan ANYTHING! I am livid! I used to love the app. I had old phone with the app installed so I could use it anywhere any time, but now, I’m just livid!
By shanam1980