Who Unfollowed me on Twitter? If you’ve asked yourself this question more than once, than Tweet Sponge is the app for you. Tweet Sponge keeps track of all of your followers. It can show you who unfollowed you, allowing you to quickly unfollow them back! Features: -Track New UnFollowers -Track New Followers -Track Followers you don’t Follow Back -Track Users you Follow that Don’t Follow You -Follow and UnFollow anyone quickly with a single touch No longer will you ask yourself: "Who Unfollowed me on Twitter?" Now’s your chance to find all of those pesky UnFollowers, download Tweet Sponge now! 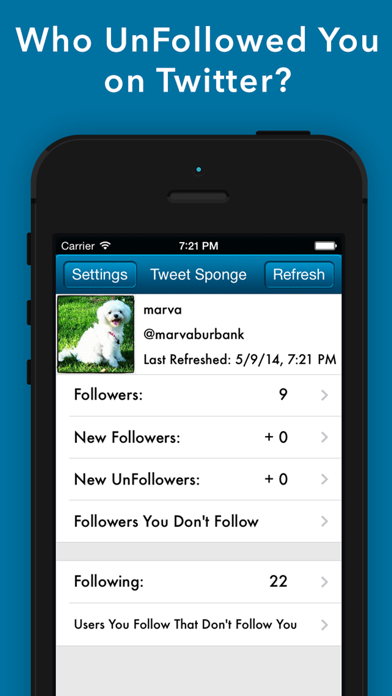 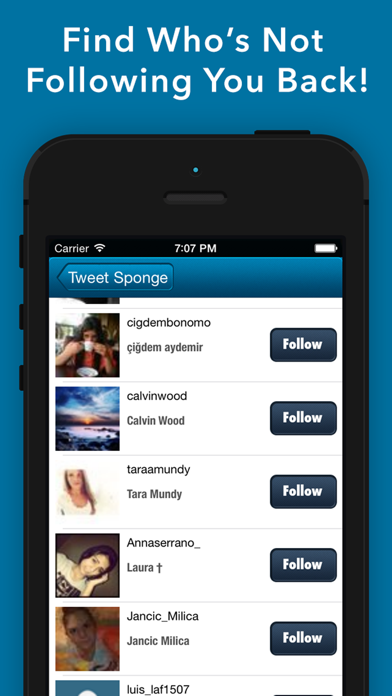 Best app for mass unfollowing people you don’t want to see anymore ! I can also check who followed and who unfollowed! Great app!!! 9/10
By jireyjay07

I really like Tweet Sponge Pro it is easy to use and gives me a quick pic of all things I want to know regarding my Twitter account. I can follow or unfollow people within the app which makes it user friendly! This is one of my most used apps because it gives me a good snapshot of my Twitter account when I don’t have the time to do the regular Twitter things.
By leemack2

App is one solid glitch. No longer useful. The only thing it absorbs is the user’s increasing frustrations.
By Bbk8tz

I’ve used it for about a week... seems to be working well
By DGR0me

Yes, this app could really use some polish as it hasn’t had an update in ages, but it’s still working perfectly on my iPhone X and iPad Pro 2018.
By 🐯 The White Tiger

I love this app .. but it’s glitching. It has not had a single update since I bought it. Please update ASAP.
By HotHummie

Four out of Five

When followers’ accounts are purged, the only way I can clear them from the app is to delete and reinstall it. Trying to unfollow a purged account will always result in “failure” as the app puts it.
By Zomondo

It doesn’t appear to be that accurate. Will show that someone unfollowed me but when I go to their account on Twitter they are following me. This happens a lot so I don’t unfollow accounts based on this app.
By DonIsMyGuy