Ranked as “the best to-do list right now” by The Verge, Todoist is used by 25 million people to organize, plan and collaborate on projects, both big and small. Use Todoist to: • Capture and organize tasks the moment they pop into your head. • Remember deadlines with reminders and due dates. • Build lasting habits with recurring due dates like "every Monday". • Collaborate on projects by assigning tasks to others. • Prioritize your tasks with priority levels. • Track your progress with personalized productivity trends. • Integrate your tools like Gmail, Google Calendar, Slack, Amazon Alexa and more. Available on any device, Todoist will quickly become your hub for getting work and life organized. Why you’ll love it on iOS: • Stay organized from your iPhone, iPad and Apple Watch. • Drag the Plus Button anywhere to insert a new task. • Simply type details like "tomorrow at 4pm" and Todoist will recognize it all for you. • All the power from iOS: Siri, Today widget, share extension, handoff, and quick actions. Happy organizing! • • • Questions? Feedback? Visit get.todoist.help or reach out on Twitter @todoist. *About Premium billing*: If you choose to purchase Premium, payment will be charged to your iTunes account, and your account will be charged for renewal within 24-hours prior to the end of the current period. You can choose to be billed monthly or annually. You can turn off auto-renew in your Apple ID Account Settings any time after purchase. 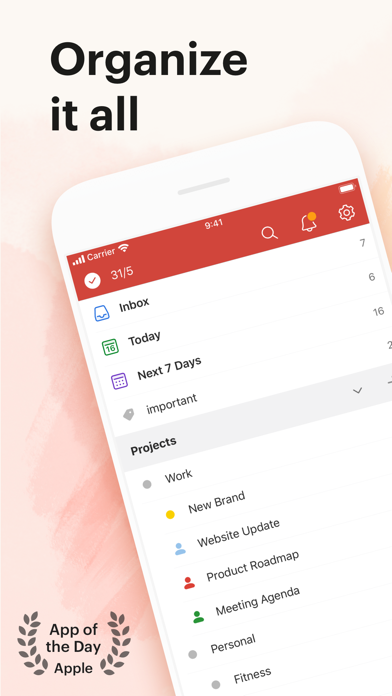 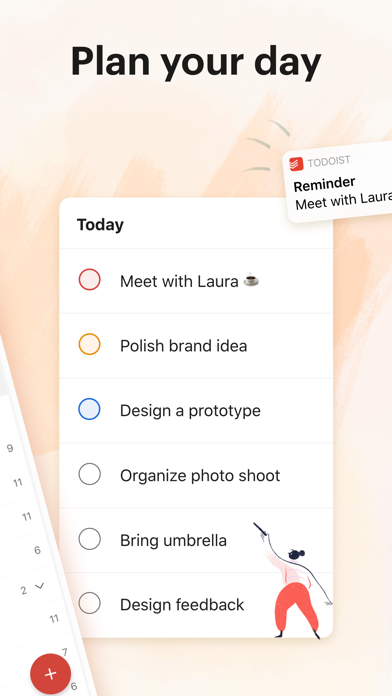 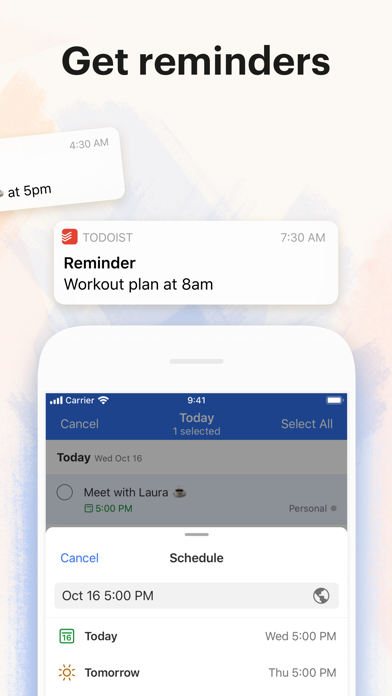 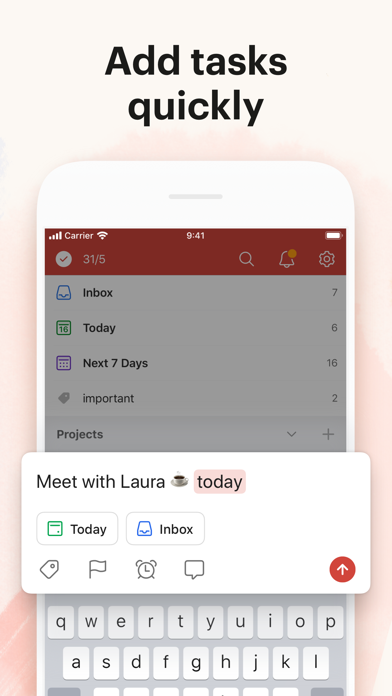 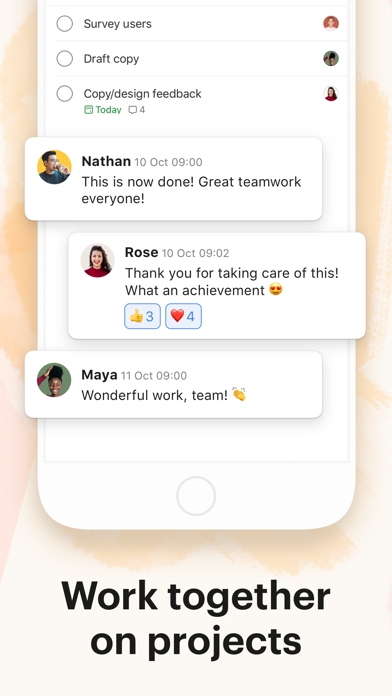 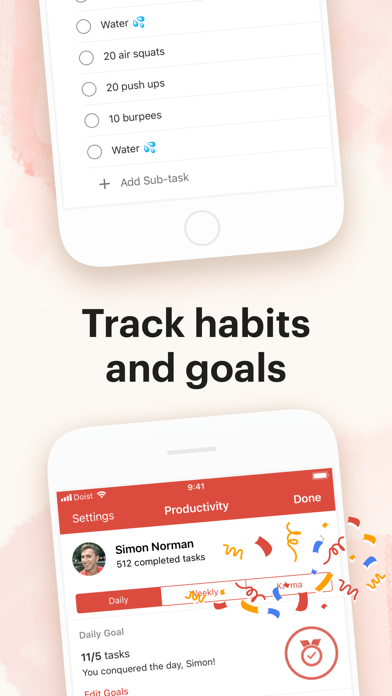 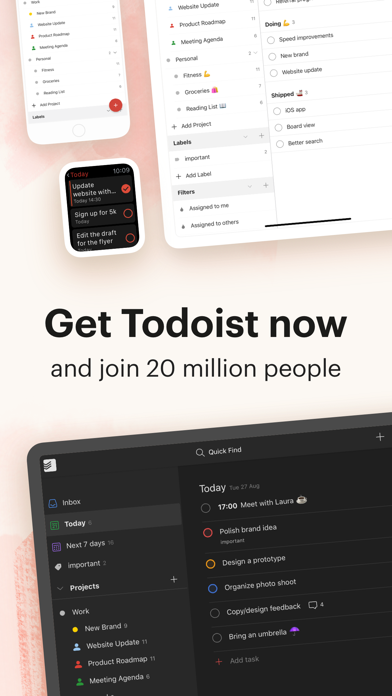 Good for sure but lacking key features such as...

Good for sure but locking key features such as the following: When commenting, the video upload limitation of 100 Mb renders at nonfunctional for me. Also to make matters worse when you upload a smaller video file in order to view it there’s no preview of the video. It actually requires you to download the file. Really bad experience. One star at best. Also when commenting, when uploading multiple images there should be an option for them to be in a stack or in line individually. When I upload seven or eight images I want the option for them to be stacked. Projects Need to be able to have a task in multiple projects at the same time Tasks as projects I can see this app evolving further into a more complete project management platform. I think that’s the direction they should go. Having said that, some of them cash I have I really projects for names of people. There needs to be a way to call a task a project with within a project. I have many more suggestions
By BEAR8JB

I have tried many apps to organize my life, and this is the best. If you go Premium, there is a lot of flexibility to set it up the way you like. My needs have changed over time and the app has been able to accommodate.
By Hdgudkeydgbdj

Todoist is the best
By Mtcst

I’m sure this app is fine for some, however, it wasn’t right for me after giving it a try - therefore I uninstalled it. I continued to be spammed with emails multiple times a day that clogged up my inbox. I tried to unsubscribe, but as I had downloaded it as an app on my phone, I had no real account to log into to unsubscribe from said emails. While it seems like a minor inconvenience and annoyance, it seems to be a fatal flaw that I can’t just enter my email into their website to unsubscribe - I had to redownload the app, go in and change my notification settings, and delete it once more. Poor management by the team.
By theappstoreistrashtbh

This app is super good for projects! I can organize and track everything I need, and then it gets done just like that! I recommend it for every age and for any use you can think of! Habits you want to build, projects you’re working on, or any task that you just need to get done!
By daffytaffyphotos

My boyfriend got me on this app and within the day I had purchased a monthly subscription. I used to always be a physical planner person until this app, which is so much more helpful in getting things done because it sends you notifications of what you need to do. I also love that instead of a typical calendar app where you schedule things in by the day, on Todoist you just type in what you need to do and when and it automatically puts it on the calendar. I also love that you can organize with different boards and make sub tasks. You can also make boards with other people that have the app and it will notify the other person of things that need to get done. For example my boyfriend and I have a list together and we can put stuff on there that we need to do together!
By mattiesl0an

The app is really user friendly. The welcome project helped me figure out the app. Took off 1 star because I like to try premium features before I purchase them. A 7 day trial would’ve been nice to see how they function.
By MeeshC

I was loving this app, especially the iOS 14 widget. I had my widget displaying “Upcoming” tasks for me and the tasks would show up with the date they were due. They also showed up with a little circle to the left that you could check off once you were done with the task. With the most recent update, these little functions disappeared. Now the widget just shows the task without anything else. I have to open the app to see when it’s due and to check it off. Please fix this!! With these functions gone, there is no point to the widget!
By wearedancing

Could be a Nice App but Too Difficult to Figure Out

The app has some great features but it’s too “user intense” for input. It’s not a “quick entry” type task list. But if you’re looking for a decent project tracker (at least the project steps without gant charts), this will do fine. But expect a fairly steep learning curve to get a handle on all of it’s features. The lack of interaction with Windows 10 or any of yours existing calendars is a real drawback. Perhaps a future version will improve this app. But for now, don’t expect a highly useful everyday task and project app. But I’m watching it for future improvements. It has potential. This is NOT a user-friendly, logical entry app, so don’t expect that.
By Jason Ripp