Edit any PDF no matter which software it was created in! pdfFiller, by airSlate, tops the list of best document editing apps used to write and edit PDF forms or templates using an iOS-based device. Get a free trial for 7 days. “pdfFiller does more than just bring a few new editing tricks to PDFs. Actually, this PDF app can add extra depth to the way we interact with these popular files.” — CultOfMac.com “The app is easy to use, lets you organize files into folders, and connects to Dropbox, Google Drive, Box, and OneDrive.” — MakeUseOf.com Meet pdfFiller to both edit and fill PDF forms: • Search for and complete pre-built templates. • Create customized fillable forms. • Type and modify text anywhere on the page. • Insert, resize and move images. • Eliminate typos with a spelling check. • Convert formats and reorganize pages. *Take your feature-rich PDF editor to go* • Continue editing PDFs even out of the office. • Use cloud access to your Box, Google Drive, and DropBox storages. • Connect with the printer via WI-FI and print out directly. eSign PDF and file instantly: • Draw your eSignature on your smartphone’s screen. • Use the direct SendToSign feature to request signing. • Collect in-person or multiple users' signatures. • Email and send docs via USPS or Fax. • Deliver documents via SMS. Enjoy quick file access: • Store documents securely in one place. • Easily search for files in your pdfFiller account synchronized for iPhone, iPad and Mac. • Open templates in the PDF editor with one click. • Upload PDFs from your email, internal or cloud storage. • Digitize paper copies without retyping. pdfFiller is a very intuitive and convenient application with an impressive number of features. Most of the edit PDF actions can be done in seconds, even if you are using it for the first time. Get a free trial! Explore all of pdfFiller's beneficial features for your iOS device and choose the paid plan that suits you best. No matter what you choose, you can upgrade anytime. Subscription Information: Subscriptions will be charged to your credit card through your iTunes account. Your subscription will automatically renew unless canceled at least 24-hours before the end of the current period. Your iTunes account will be charged for renewal within 24-hours prior to the end of the current period. Manage your subscriptions by going to your Account Settings in iTunes after purchase. Terms of use: https://www.pdffiller.com/en/terms_of_services.htm Privacy Policy: https://www.pdffiller.com/mobile/privacy_policy.html Your feedback is important to us, so please email support@pdffiller.com 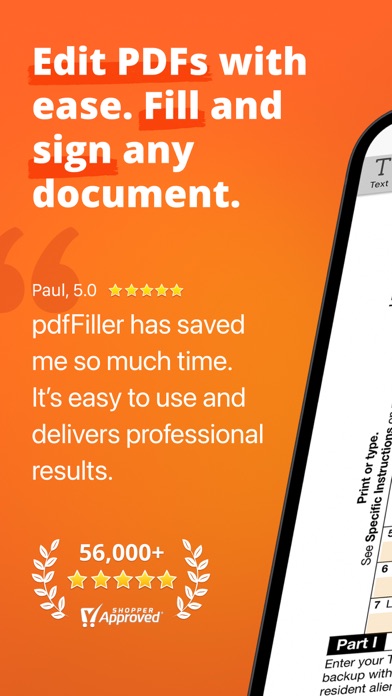 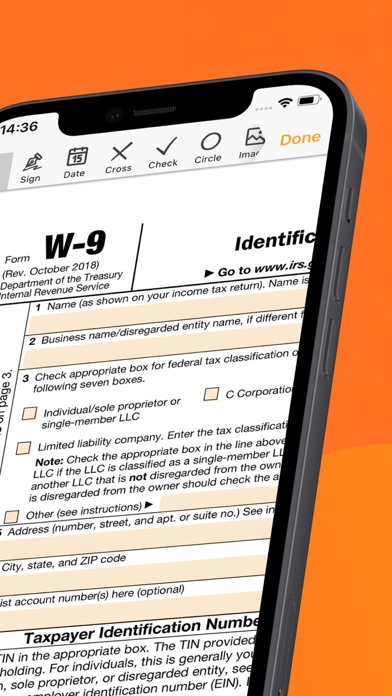 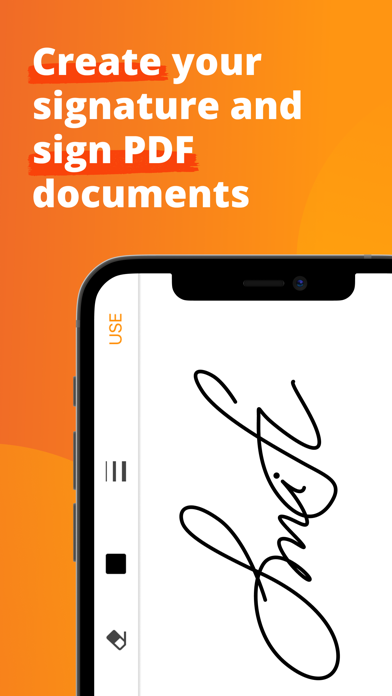 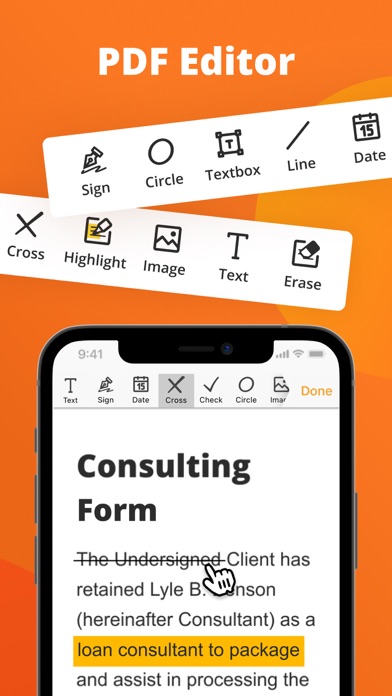 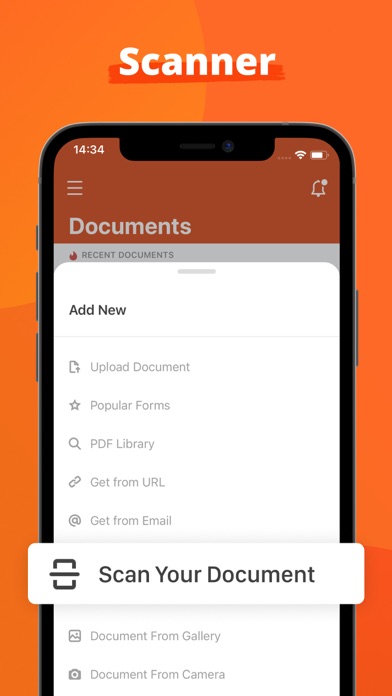 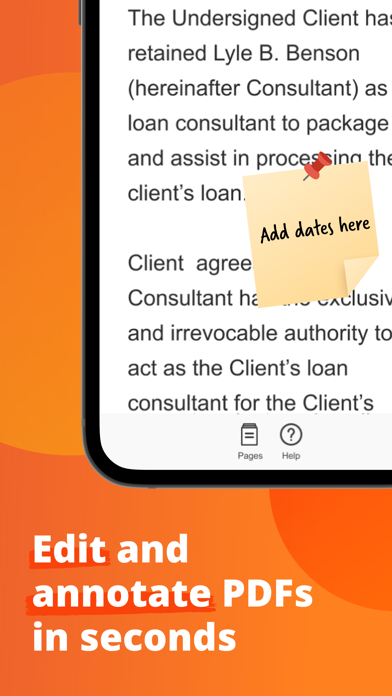 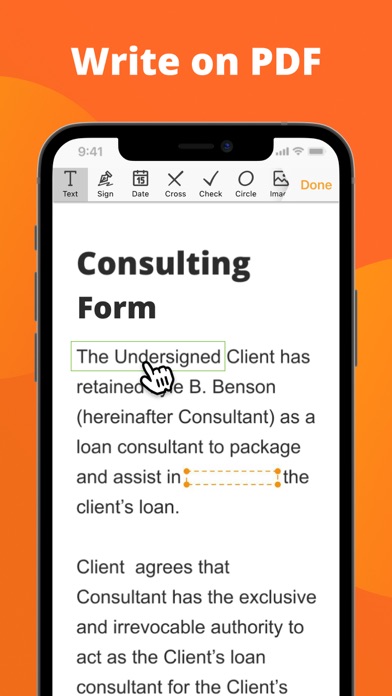 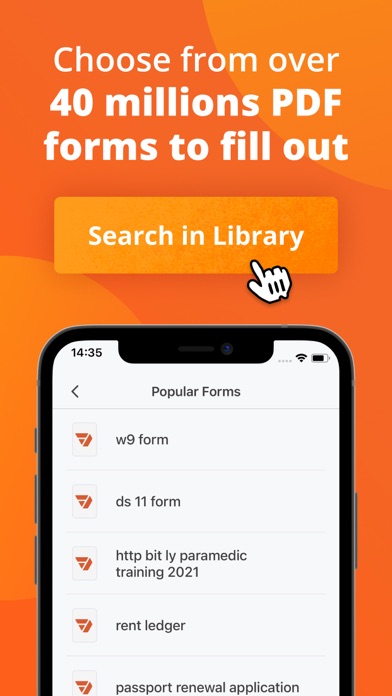 Trying to email a signed doc to my personal email.. And the app has been idling for over 10 mins. After paying for the subscription of course. Smh.
By D1000.LMG

It’s great but no one wants to sign up for everything. Stop trying to make a buck off everything.
By Breanna 💜

I spent 10 minutes filling out a form, only to find out after that you can’t actually use the results without a subscription. Yes.. there is a free period, but you still have to subscribe and give payment info first. The app itself worked ok, it does take some extra clicks because it jumps around when you change lines, but overall it worked. But because of the misleading practices, I’ll find another way to fill out my form online.
By OTRTEXAN

I needed this to sign a few documents that I did not want to wait for in the mail. I downloaded the app and started the free trial however it did not work for the documents that I needed. I searched the entire site on how to cancel the free trial subscription even went on my desktop computer to try to find out how to cancel the trial subscription as well with no such luck. A few weeks later I received an email notifying me that a payment would come out of my account for the yearly subscription, at that time I attempted to contact them via the online live chat. No one ever came to the live chat even though it specifically says “Just a moment! Our support team member will join the chat within 30 seconds.” I work from home so I left the chat open for the eight hour shift that I worked on that day and no one ever came to the chat. Once I got off work I sent an email and advised them that I would like to cancel my subscription. I received a response back requesting that I verify my account information and once I sent that information in I received a second email back informing me that the subscription had been canceled. Here we are a week later and my account was charged the yearly subscription. I have made several attempts to contact this company however no one has responded so therefore I have gone to my financial institution to dispute the charges and block any further payments coming from my account. Good luck I hope you have better success with this app than I did. The developer did contact me and after several messages back and was able to provide me a refund for the amount that came out of my account. Somehow I got signed up under two different emails.
By Perfect Storm 75

A pain for recipients

I received a link for a one-page form from someone using this software. It won’t open on my Mac or phone, even after I downloaded the app. Maybe it will work if I register for an account, but I’m not creating an account on yet another software platform just to open one form from one person one time. My guess is there’s a way to make it work, but it will take less time just to get a copy emailed to me as an attachment or even to remake the form from scratch.
By hdgrjshrwjg

Not free
By alexalex1997

This app is horrible

It said that it was free. So I spent an hour editing a document and at the end it didn’t let me save my work unless I put down my credit card info and sing up for a free trial. If ai knew that before I would use something else instead. Do not use this stupid app.
By heshtoc

Doc unable to be opened

After spending 45 min editing a doc then emailing thru the app, I breathed a sigh of relief. Two hours later, recipient called me stating she was unable to open doc on her end. I was unable to email the doc via my own email. We had to go thru the doc verbally, line by line. Time consuming and frustrating. NOT recommended.
By luvmyshibas

Garbage app that just wants to rip you off. Run away
By The_Joker_666