The Arizona Republic e-Newspaper The e-Newspaper is a digital replica of The Arizona Republic print edition that allows you to flip the pages, scan the headlines, read the stories and view the ads. Features Download the app and enjoy in-depth coverage of topics you’re most passionate about, including watchdog reporting that informs and connects and exciting stories that entertain and inspire. With award-winning journalists, engaging columnists and compelling content, it is Arizona’s top source for news and information. The e-Newspaper is updated with the day’s print edition each morning, and keeps you in the know like no one else. 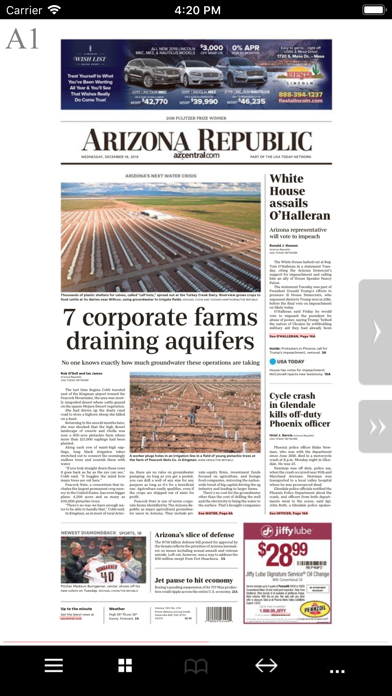 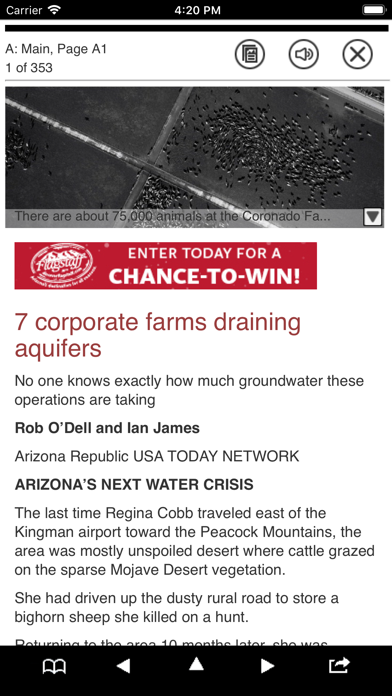 The AZ Republic should be able to create/maintain an app that doesn’t crash several times during each use. The app also requires a reader to sign in multiple times on the same device. Why is this app not more user-friendly?
By BuddyInAz

Even though we pay for this religiously, half the time it says we need a subscription. Today it won’t open at all. If I didn’t love my daily newspaper, I would be gone so fast your head would be spinning.
By A,ta

The application requires a password every time you access the app. This is silly since the web version has not requested a password for more than a year. Since passwords cannot be stored, you have to waste time. Additionally the app does not pull the data until you want to read it. This means either no info if offline or a fuzzy pdf while it downloads.
By Hfgsxqwertyfdfhssjkkotfvnsfh

The login process is inconsistent. I had a subscription thru iTunes which worked well for about 3 months but then I couldn’t login. I cancelled that and subscribed thru the paper directly. It worked for 2days and then stopped again. The companion app works (with too many ads)
By jh85255

One Star Because Zero Not An Option

The app is not reliable at all, the only thing worse is their customer service. I have used it successfully, then it will give me a message when I select an edition that says “We’re sorry! You need a subscription to azcentral to be able to access the edition. Already a subscriber? Please activate your account.” When I do that I get a message “This subscription is already associated with an account.” I called the help line and the person I got very abruptly told me “Update your app and it will work”. I am using an iPad app. I have the latest version and when I re-downloaded the app since there was no option to update, I had the same result both on the phone and the iPad. It’s bad enough most of the news is fake, but the help is as well!!
By Sibpolice

Tried to download but it’s just circles back to the same page.
By Sundance123456789

The “special” USA edition is only available every so often, not daily. Nobody answers the phones at customer service. Chat is never available. The emails are handled by agents in India. The sentence structure and grammar make this quite obvious. Totally useless. Such a letdown from THE newspaper in the fifth largest city in the United States.
By Asujerry

Extremest left wing, loaded with unfair misrepresentations. It is too bad that this propaganda is presented as unbiased news reporting.
By RMW111

Read at your own risk.

Just deleted the app. AZ Republic limits what you are able to read either the exception of their liberal opinion pieces which you ARE able to read in entirety. All of their option writers are liberal. What’s that say about the rest of the paper.
By Bucaru

I have been using this app on my iPad for several years with minimal problems (I am a paid subscriber). Lately I cannot get through the first section without it crashing. The print / share function doesn’t work anymore. I just tried it on a galaxy tablet and it is working a little better. I prefer to use my iPad and wish it would get fixed. Do the developers ever read these reviews, if so, FIX IT!
By Phoenix Cindy

The Item of Millburn Print