--- Key Features [1] --- All Your Favorite Shots in One Spot Post your favorite shots to your private Mural within the Quik app and never lose track of them in the black hole of your phone’s camera roll again. Share to Quik from Anywhere You can share your best shots directly to Quik from your phone’s camera roll, text threads, email and more for maximum speed and convenience. Automatic Highlight Videos Create amazing videos automatically, beat-synced to your own music or GoPro original music, by simply selecting the photos + videos you want included. Powerful Editing Tools If manual editing is your thing, you’ll love Quik’s powerful yet simple editing tools, stylistic themes and premium filters. Speed Tool Take ultimate control of video speed—super slow, fast or freeze—at multiple segments in a clip. Frame Grab Get incredible photos by capturing a frame from any video. Filters Exclusive filters optimized for environments like snow and water. Share to Social Share directly from Quik to your favorite social media apps. [2] --- GoPro Camera Owner Features --- Camera Remote Control Use your phone as a remote for your GoPro, perfect for framing shots, recording from afar and adjusting settings. Preview Shots + Transfer Content Check out GoPro photos and videos on your phone’s screen before you transfer them to Quik—even when you’re off the grid. Live Streaming Broadcast whatever you’re doing as it’s happening. [3] Horizon Leveling Get built-in horizon leveling, so your shots are never crooked. Unlimited Cloud Backup GoPro subscribers can save to the cloud from their camera or app—all in original quality. [4] Firmware Updates Getting the latest updates for your GoPro is easy—just follow the simple instructions when you pair and you’re all set. --- Footnotes --- [1] Subscribe to Quik or GoPro to enable unlimited Mural imports and multi-clip edits, and receive unlimited access to premium features and tools. Quik and GoPro Subscription services are available in select territories. Cancel anytime. See terms + conditions for more details. [2] Compatible with videos captured in select modes only. [3] Stream video directly to Facebook Live, YouTube, Twitch or other platforms using an RTMP URL. Facebook app and account required. YouTube account required. [4] GoPro subscription service available in select territories. Cancel anytime. GoPro cloud storage does not support content captured with GoPro Fusion. “Automatically” requires the camera to be connected to the GoPro app or Wi-Fi. Separate data fees may apply. Visit gopro.com/subscribe for info and availability. 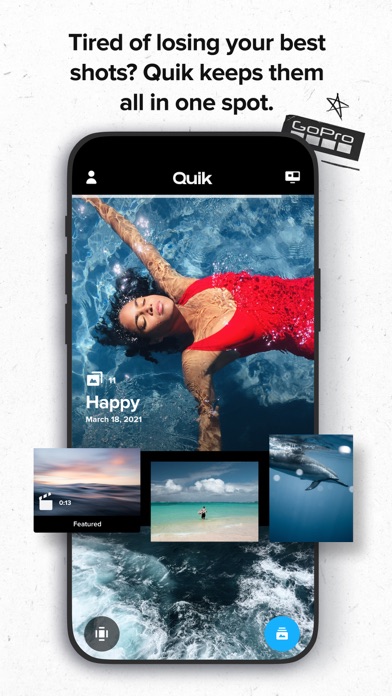 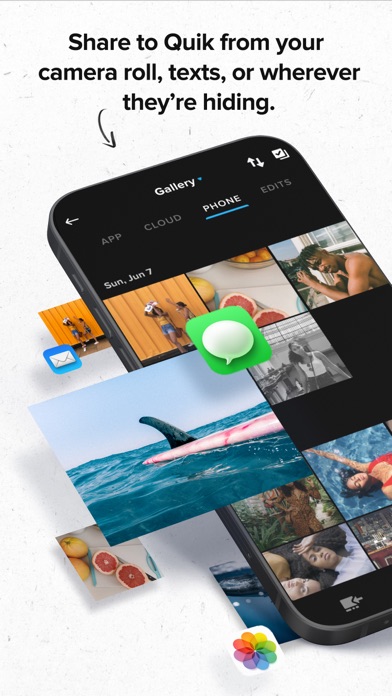 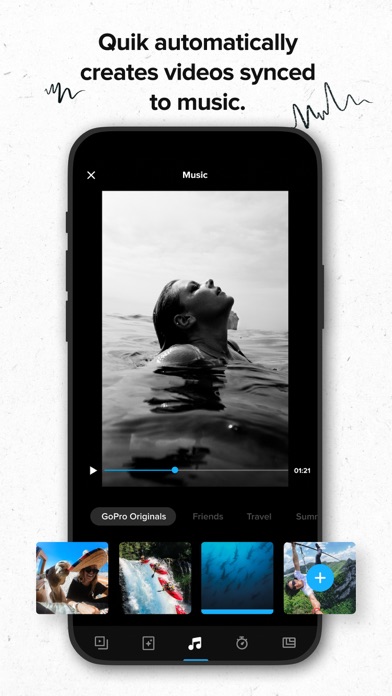 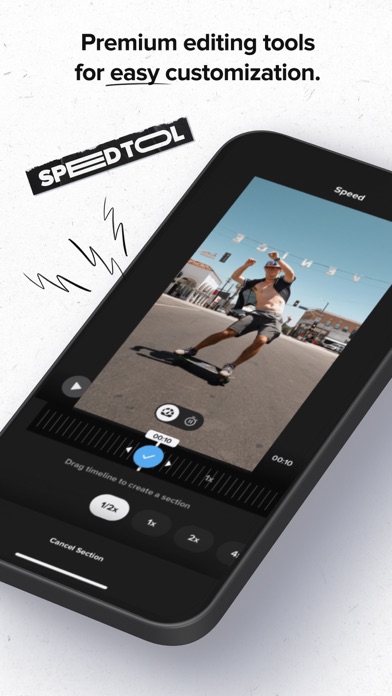 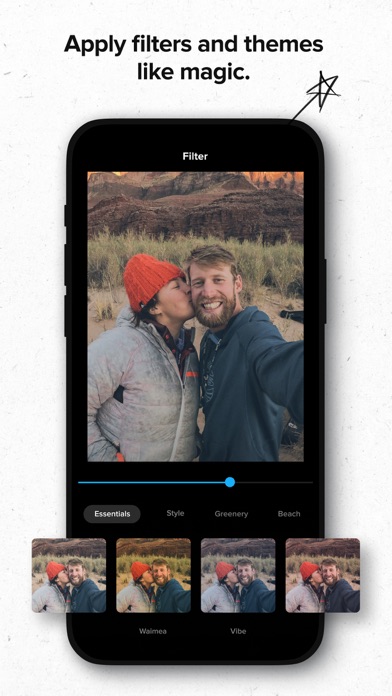 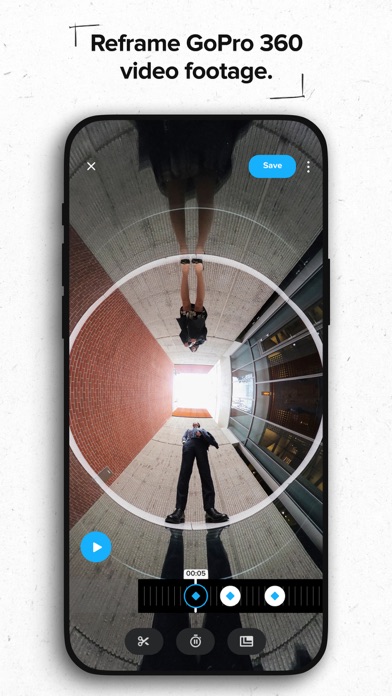 I loved this app. I made over 20 videos and was getting good at it. The update is terrible! It constantly freezes. I’m using an iPhone 12 so it cannot be the hardware. What the F!!!?? How can you release this app to the public. It is utter trash! Fix it now before I sell my GoPro and delete this app for good!!
By JonathanKatzir

Why I rated it 3 stars is because when I open the Preview for my GoPro it sais it had trouble connecting to WiFi sonI Forgot the WiFi and did it again , NOTHING! It just keeps doing that. But Everything else in the app is good! But there is one more thing... It’s hard to get the gopros footage from the camera to the App and then the App o Photo’s. Can you please make a easier way to get the footage from the camera to the photo’s app! Thanks!
By Xztreem

C’mon get it together apple & Gp

How is it that Apple greedily takes my money.Only for GoPro to decline my subscription or to not show it now I got a deal with making phone calls and showing emails and you guys can figure this out still get this is like the third time this is happened for me I pay for the $50 subscription in Apple go through doesn’t see it then I spent hours on the phone with some dude from a different country who doesn’t know what’s going on can’t figure it out I have too many emails with accounts he doesn’t know what to do yada yada yada you guys need to make this more streamlined and figure it out quick it’s really annoying
By SoCalRepairsMan

Ok. Does what I need.

Simply put, I don’t ask it to do much. Control, capture, select & save video. That’s it. Sometimes it won’t do even that. Maybe this update will fix some of that. But one thing that hasn’t been fixed is the interruption of any audio out on open to its splash screen. Particularly irritating if all a user is doing is accessing a remote camera to turn it on or start/stop recording while they have music playing. It might be nice to give the user a switch in preferences to ask/don’t ask for audio override.
By Carguybikeguy

the old quik app worked much better. the new app is way too glitchy and the quality of my saves are atrocious. also half the filters are gone. pls bring back the old quik.
By Jaykerz Delano

This a great app and easy to use. If you take the time to learn how to actually use the app you may be surprised. It’s not like you’re gonna just open it and like magic you’re a production supervisor. It’s like everything else you must learn basics first before you can advance. Freaking morons!!!
By CoolDew19

I was able to charge, set up and document our first RV road trip within in no time! I am not tech savvy but this was super easy! I found a tutorial on YouTube (Jordan Hetrick) that walked me through each step. Our first photo and video were taken minutes after we set up the GoPRO to our windshield. If you’re thinking or debating on getting a GoPRO don’t hesitate, document your adventures with ease!
By Kerri -NJ-

Old Version so much Better

I am so frustrated with this new version. What a nightmare! The old version was so user friendly. This one is so hard to find everything. In the past I just started a new project quickly selected some photos and had a video made. This version has a mural which I don’t get and I am still trying to figure out how everything works. I am super busy and frustrated beyond belief that I have to figure out how this works. Not syncing well with my iPad to use my photos. And I had to pay for this version. Can I just have the old one back I would even pay for it.
By writingpeggy

GoPros thinly veiled attempt to charge for cloud storage is an extreme annoyance.

The day Gopro tries to charge for cloud storage, which is their primary purpose of them making it soo incredibly difficult to upload photos to you phone (and forcing you to add them to the cloud first) will be the day I immediately get rid of my Gopro all together. The cloud feature continues to be the single worst feature of owning a Gopro at all and is an extreme annoyance.
By A. Cattell