Who UnFollowed Me on Instagram? If you’ve asked yourself this question more than once, then UnFollowers on Instagram is the app for you. Followers on Instagram keeps track of all of your followers. It can show you who UnFollowed you, allowing you to quickly unfollow them back! Features: -Track New UnFollowers -Track New Followers -Track Followers you don’t Follow Back -Track Users you Follow that Don’t Follow You No longer will you ask yourself: "Who Unfollowed me on Instagram?" Now’s your chance to find those pesky UnFollowers, Download Now! Note: This app is not affiliated with Instagram. --- Auto Renewable Subscription Terms: * The length of free trial is 7 days, the length of each subscription period is 1 month. * Each subscription period allows: No Ads, and Unlocks all Features of the product. (UnFollow, Insight lists, etc.) * Your free trial subscription will automatically renew to a paid subscription unless auto-renew is turned off at least 24 hours before the end of the free trial period. * Please note: any unused portion of a free trial period (if offered) will be forfeited when you purchase a premium subscription during the free trial period. * You can cancel a free trial or subscription anytime by turning off auto-renewal through your iTunes account settings. This must be done 24 hours before the end of a free trial or subscription period to avoid being charged. The cancellation will take effect the day after the last day of the current subscription period, and you will be downgraded to the free service. * Payment will be charged to iTunes Account at confirmation of purchase. Terms of Use: http://www.sepiaapps.com/subinfo/ Privacy Policy: http://www.sepiaapps.com/privacy-policy/ 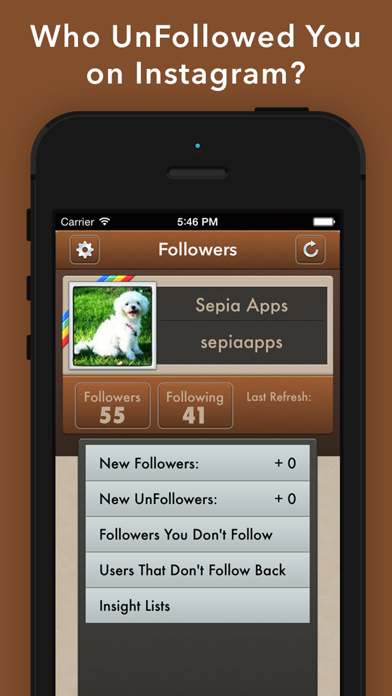 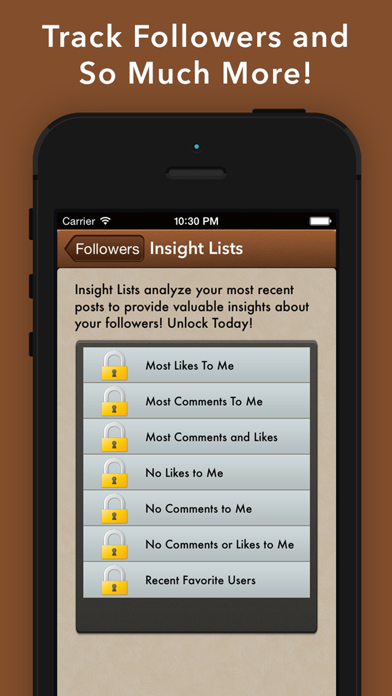 This app literally worked for one day. One time.
By Newest1234

Downloaded because it had positive reviews, immediately had someone hack my instagram within 5 minutes. Why is everything so shady
By K-line

Way too many glitches doesn’t really work
By QuaeBae

I’ve downloaded and deleted this app a couple of times now. In the beginning it was, eh, so-so. I had access to every feature and then the app upgraded and you now have to pay to use certain features- which is OK! You have to charge to grow BUT I was paying 4.99$ a month for... NOTHING. Under the “users who don’t follow you back” tab, it would tell me but I could not unfollow from the app. What’s the point of paying for an app that doesn’t actually let you use the features you are paying for? Will NOT be using this app from here on out. Would LOVE a refund but we all know that won’t happen so here’s this review. Don’t waste your time and money.
By tiredoflookingforunfollowapps

Can only see who unfollowed you, have to pay to actually unfollow them. There are a lot of other free unfollow apps, I would have never downloaded this one.
By kalahjenea

Working properly since December
By dicifndjdj

App collects all your data then stops working

This app worked once, just long enough to collect all my social media data, then stopped working. Beware.
By Mbuki Dru