The SensorTag app and kit with 10 low power sensors. Connect your Bluetooth Smart or WiFi SensorTag and get your sensor data online in 3 minutes. The SensorTag is ready to use right out the box and no programming experience is required to get started. All design files are shared at www.ti.com/sensortag, HW design, software stacks, and even 3D design files for printing your own SensorTag housing. The SensorTag is the industry first IoT development kit that enables easy and quick integration of sensor data with cloud connectivity. It offers low power wireless connectivity to be integrated into any product. It allows you to quickly test and develop web connected applications and easily change between wireless technologies. 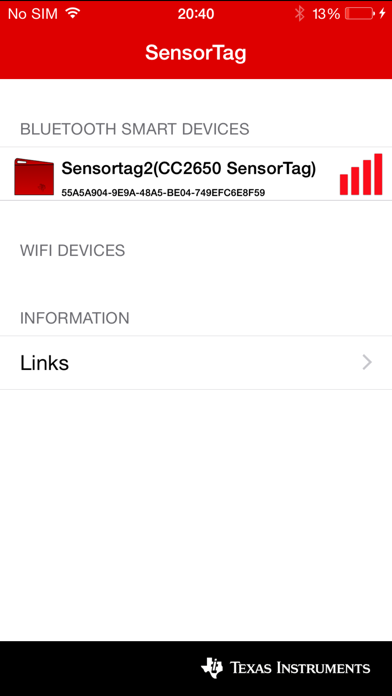 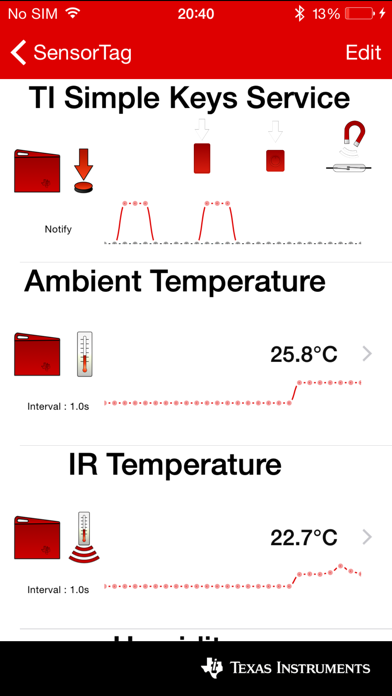 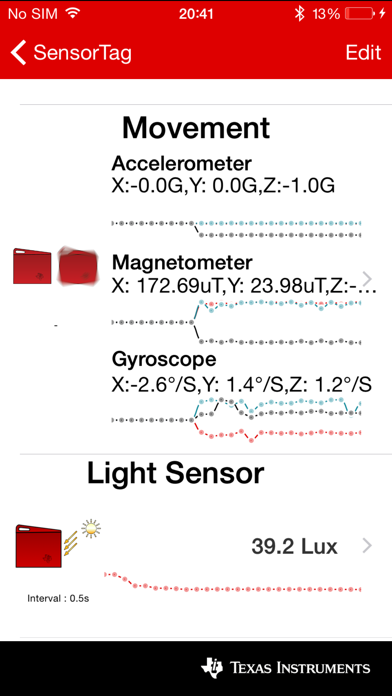 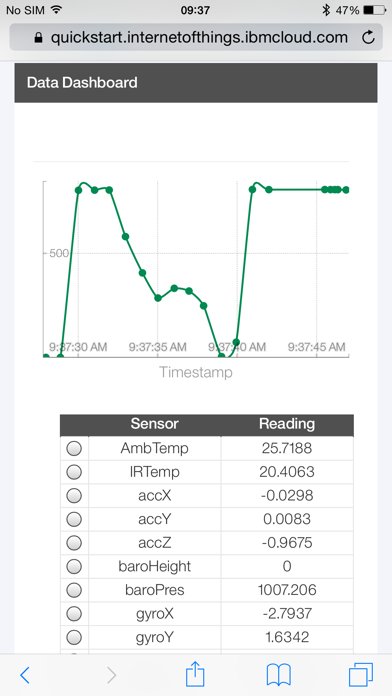 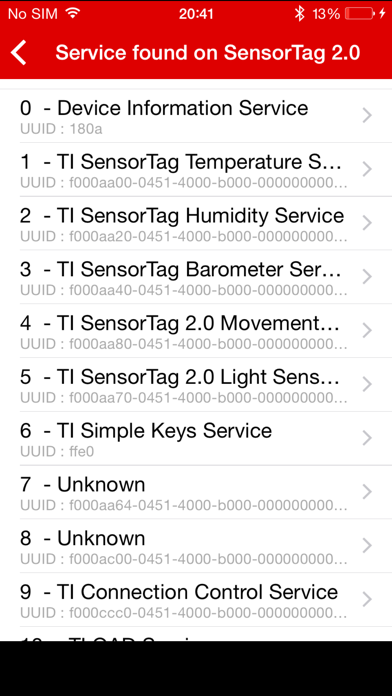 The app seemed not to recognize the older Sensor Tags. However with 11.2.6, this issue disappeared. When clicking on the Step by Step guide for WiFi configuration, the app still crashes.
By JNC23x

When I try to flash firmware onto my new 1350 launchpad using this app, all of the firmware on the cloud says "wrong board type"
By Julesroxmysox

I can't find the sensortag wifi to connect to from my ios device. Has anyone had the same problem?
By Onduty

Can app RECEIVE message to turn on LED?

The app works great for sending data to IBM's Bluemix and viewing in Node-RED. But we cannot figure out how to send data TO the App and SensorTag to turn on an LED on the SensorTag. The LEDs and buzzer work from the app so the code is in the BLE Stack on the SensorTag. Does the App support receiving messages to control the LEDs? If so, please add this to the Quickstart flow or to a Registered flow if needed. Also, the LEDs and buzzer appear to be readable (vis SensorTag2015 Wiki). Please add LED1, LED2 and buzzer to the data coming from the SensorTag to the cloud. Just a couple of tweaks from 5 stars!
By sdtrent

Whenever I try to load the sensor view, the app pops the nav controller and goes back to the list. Useless.
By ctbeiser

Used to work before upgrading to iOS 9.
By Upsetx9000

Just to reiterate other reviews.
By CdrDave

Great app, but crashes with iOS 9

Great app, but crashes when preparing sensor view on iOS 9. A configurable publish rate on sensor data would be nice for demonstrations as well.
By bryancboyd

Used to work, crashes on iOS 9

If you connect to a tag and try to use sensor view it crashes after enumerating services.
By GuyZero