GUITAR PLAYER is a magazine for serious guitarists who want to make the most out of their playing and keep informed on developments in equipment and instruments. Editorial emphasises stylistic diversity in coverage of music and leading and up and coming guitarists. Features include instructional columns, how-to advice, honest equipment reviews, recording, song writing, record reviews and career information. Join thousands of others and download our free app now! ------------------- Once you’ve downloaded our app, you will need to take a free trial or purchase a single issue or subscription to access our in-depth content. We also publish specials and guides - browse our publications, read what interests you most, and get inspired. Back issues, specials, and future issues are available for purchase within the app. Subscriptions are available on various monthly and annual terms, and auto-renew until you decide to cancel it. Check inside the app for current pricing. *** Please Note: Our digital edition is not printable and does not include the covermount items or supplements you would find with the print edition *** • The free trial offer is only available to new subscribers. If you have previously subscribed then payment will be taken immediately. • You can cancel at any time during the free trial period and you will not be charged. Simply turn off auto-renew in your Apple account subscriptions page at least 24 hours before the auto-renew is due. • Payment will be charged to your iTunes Account at confirmation of purchase. • Your subscription automatically renews unless auto-renew is turned off at least 24 hours before the end of the current subscription period. • You will be charged for renewal within 24 hours prior to the end of the current period, for the same duration and at the current subscription rate for that product. • You can manage your subscriptions and turn off auto-renewal by going to your Account Settings after purchase . • No cancellation of the current subscription is allowed during active subscription period. This does not affect your statutory rights. • Any unused portion of a free trial period, if offered, will be forfeited when you purchase a subscription. • We will be collecting information about your use of the app both when you are online and offline. To find out more please see our privacy policy. The subscription will include the current issue if you don't already own it and subsequently published future issues for the duration of your subscription period. ------------------- By purchasing a subscription or downloading an app you agree that you have read and accept Future Publishing Ltd's Privacy Policy and Terms of Use: www.futureplc.com/privacy-policy/ www.futureplc.com/terms-conditions/ 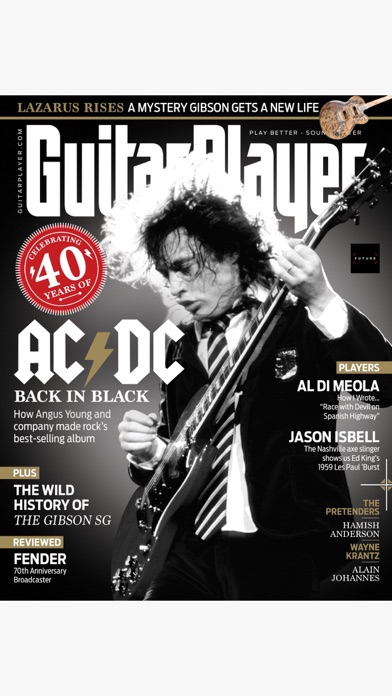 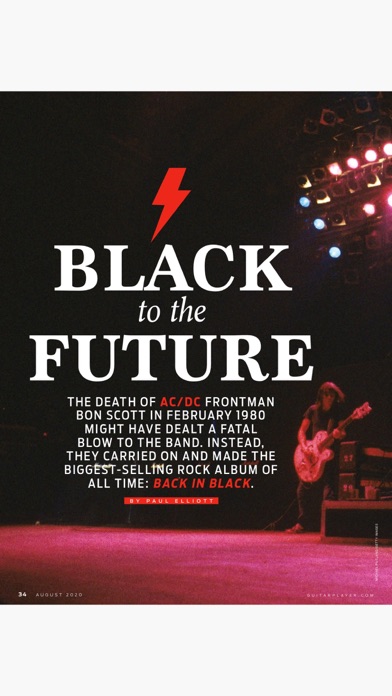 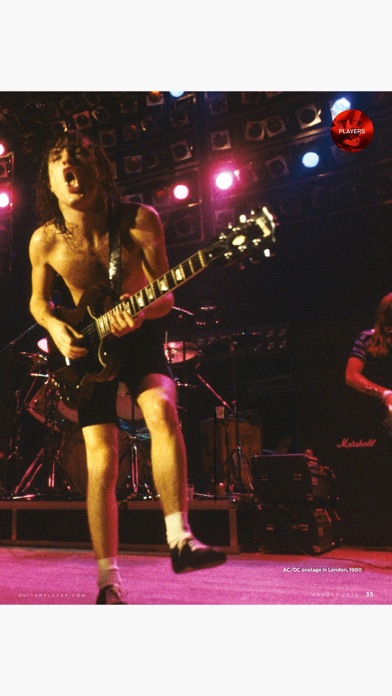 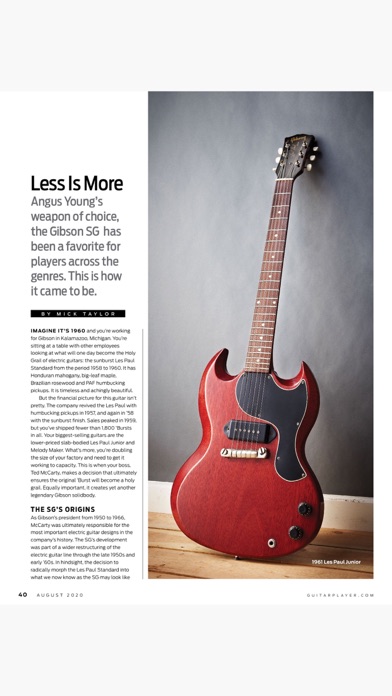 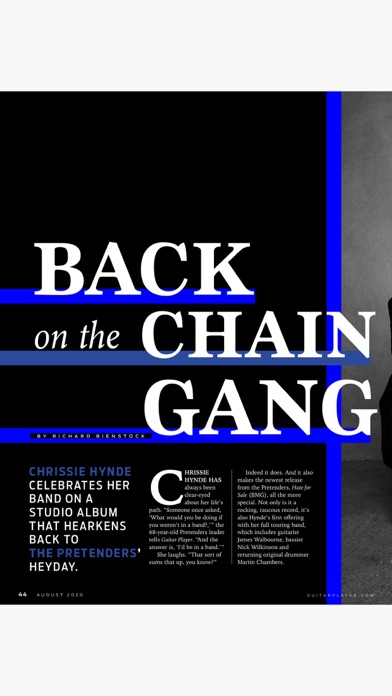 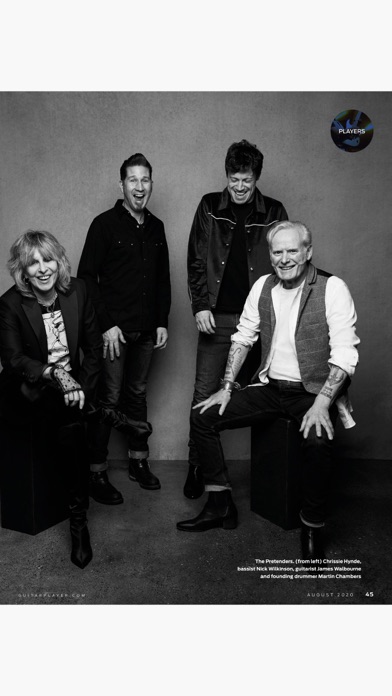 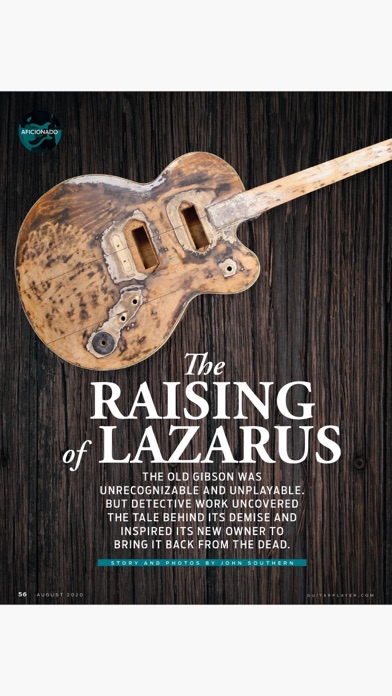 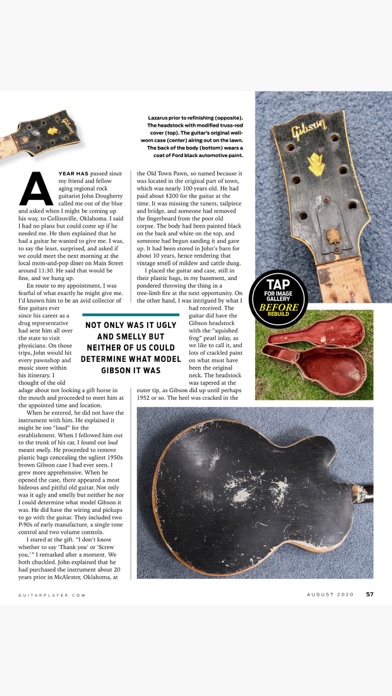 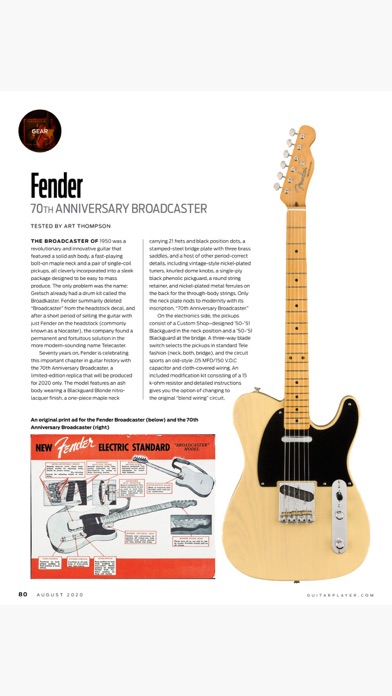 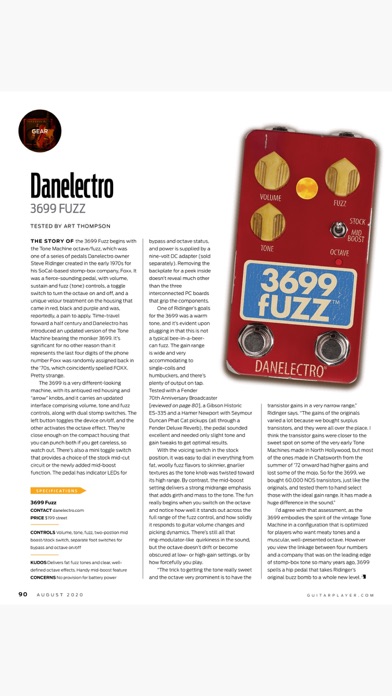 Doesn't work at all

Launches and immediately crashes and now I can't access a magazine I purchased to read on my computer. Nice one. Same thing with Guitar World, btw.
By Phreddie M

Its been great for a long time

I don’t recall my first issue, but Guitar Player has been a favorite for decades. The old days had Skunk Baxter’s column when he preferred Fenders in case you spilled a beer on the guitar. Thanks for the continued balance of history, lots of great pics and a diversity of genres, nationalities, genders, music reviews. The interviews are incredible and you always ask about the rigs. A fan since the mid 70s.
By Mike from Baileys Harbor

I’ve had no success at all with my subscription. I subscribed to Guitar and Bass Player and haven’t been able to access content for either of them. I just get a message stating that “Storefront failed to load”. I’m on a fairly new and up to date iPad Pro. I’ve reached our for help from within the apps as well as through the publisher website. As a long time subscriber to the print edition of Guitar Pkayer, I already had an account with them. After a couple of weeks, I’ve still not received any response other than an automated email acknowledging that they had received my report and would reply soon. I called my credit card company and cancelled payment. The print magazine is quite good. I’m very disappointed.
By Beachcomber Al

I am unable to even login to this app. It simply displays a message “Storefront not loaded.” But there’s no indication of when the storefront is loaded. My repeated requests to customer service have not been answered.
By DenverGuitarist

Where is my Magazine.

Downloaded the app after being charged for subscription and I’m being asked to pay for each issue individually.... Logged in and out several times with luck accessing the digital downloads.... not happy🤨
By DanoR2

Like others, I had some issues with my library of GP Magazine when the app changed. I wrote an email to get support and they responded within 24 hours with a fix that worked! Their support people do a great job. I have been a subscriber since the early 1970’s and converted to the iPad version because I have vision problems; the digital magazine enables me to render all articles into larger typeface.
By MAB124

I have been ready GP since the 80’s. Too little in depth articles and interviews, too many pages of commercials....the education sections are good, but then, in today s world with say a TrueFire do I really need this from GP ? GP ran a first page cover on Eric Johnson, when he was basically unknown.....we need more of this.
By PM1224555

Guitar Player magazine is an excellent blend of equipment and artist pieces, with great instruction thrown in. No fluff, just great stuff.
By bluesmedia

Where are my back issues?!?!

I previously purchased every issue available on the app, going back all the way to 2011. After the update, all of my back issues before July 2018 are gone. Hopefully this will be rectified.
By thamorse

New app is not an improvement
By Jeng7777