OiNk! Build makeshift contraptions from a huge collection of parts and make it to the goal without blowing your vehicle to pieces! IGN's "Best Mobile Game of 2012" Winner! "Extremely fun and very challenging" -- Kotaku “The best title Rovio has released yet” - IGN “4/4 - Must Have” -- Slide to Play "If you can’t enjoy watching a pig drive a badly constructed car off a cliff and onto a pile of dynamite, you probably don’t have a soul." - Yahoo/BGR Create the ultimate flying/crawling/rolling/spinning/crashing device and pilot the pigs safely to the eggs! The Bad Piggies are after the eggs again -- but as usual, nothing is going according to plan! Can you create the ultimate flying machine and steer them safely to their destination? Those tricky pigs have a few objects they can use, but they need your help to turn these into the perfect transportation! With more than 200 levels, and free updates coming up, you have hours and hours of pig-crashing, exploding, and flying fun! Get three stars to unlock over 40 more levels! HINT: Sometimes you need to play the level several times to achieve all the objectives -- try building a new device or steering in a different way to earn all the stars! Features: ● Over 200 levels crammed with flying/driving/crashing fun! ● 40+ special levels unlocked by getting three stars! ● Free updates! ● 9+ sandbox levels to stretch your creativity! ● Ultra-special, ultra-secret, ultra-difficult sandbox level to unlock by collecting ten skulls! Oh – guess it’s not a secret anymore... ● 42 objects to create the ultimate machine: motors, wings, fans, bottle rockets, umbrellas, balloons, and much more! Mechanic Pig ● Need help? This little piggy will build it for you! ● Mechanic pig pre-assembles transport for you! ● All you have to do is pilot it! ● Tweak his design to get all three stars! New Episode: The Road to El Porkado Embark on an archaeological adventure in an all new episode full of treacherously icy environments and spooky dark caves. Be sure to equip the trusty lamp to find your way in the darkness – or put the new Night Vision Goggles power-up to use! Get ready to see pigs fly! Become a fan of Bad Piggies on Facebook: http://facebook.com/badpiggies Follow us on Twitter: http://twitter.com/badpiggies Terms of Use: https://www.rovio.com/eula Privacy Policy: https://www.rovio.com/privacy Important Message for Parents This game may include: - Direct links to social networking websites that are intended for an audience over the age of 13. - Direct links to the internet that can take players away from the game with the potential to browse any web page. - Advertising of Rovio products and also products from select partners. - The option to make in-app purchases. The bill payer should always be consulted beforehand. 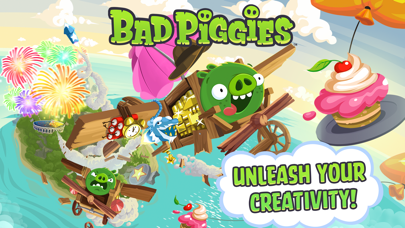 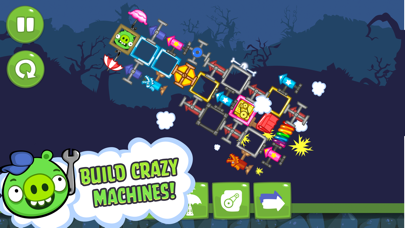 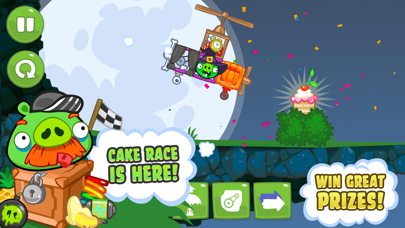 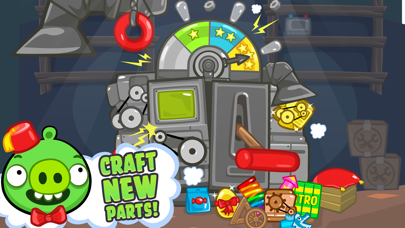 A game that has unstoppable ads... so no matter what you do, they crave money from advertising... greedy devs and company wants more and more money. Used to be a great game but no I refuse to play it with pop ups for every other screen I select or when I refresh the level I’m on :(
By GLOSSYI'D

ITS BACK!!! And some bugs/annoyances to address

ITS BEEN GONE FROM THE APP STORE (I’m in US, so I have no idea why) AND ITS FINALLY BACK!!! I even payed... hope it remembers my Apple ID/game cloud... (that’s called foreshadowing!) No it didn’t. **sigh** Why must you be so? 1. When I’m scrolling through the materials/parts on the iPhone 10 and over, the home bar gets in the way, temporarily closing the app. 2. On the same devices, (and I have one so I don’t know if it’s just these) there is a spot near the corner of the notch, when clicked it will exit out of the app completely. Your finger/thumb will occasionally click here do to your thumb relaxing and getting further and further from the center of the screen. 3. Finally, the notch makes it so some of the app is cut out. Nothing vital, but just a little ocd can arise from it. These bugs are ordered in severity.
By Piggy Vligs

Since the removal of the original angry birds for no reason, I thought it would be the end til I found this in the App Store. It was fun but there should be more levels, more items and more sandboxes. Like seriously, this game seems to be left out
By Danny rhe gamer

I love this game overall, I played (almost) all the levels, but there is one bug. When I tap the camera icon, it kicks me out. Please fix this bug!
By parsiaS

So I was finally replaying this game and i was super disappointed rovio, I was sad that the models for some characters bugged out and sometimes physics screws up, this game was honestly my favorite, now it has so many ads to play and is broken to the point where its not very fun, SO! How can you fix this, well take it from me: 1: fix the models they are clipping 2:please add some new level sets 3: Make it to where you can disable ads at the price of not being able to get the x2 coins stuff 4. Make new items! 5. Add a sandbox mode that is like field of dreams, just is a lotta snout coins. Thats it! I hope you read this and took at least one into consideration.
By Dr_yeet

I want field of dreams

So I attempted buying field of dreams but it would Not let me buy it.
By ItzCrystalFlame

Let me just say, this used to be a GREAT game. Ever since I was three, I loved it and played to my heart’s content. But now, I’m getting bored. There aren’t any more levels coming out, no more Easter Eggs to find, and I’ve tried every single combination of parts. And, worse, there are now ADS. I suggest the developers should remove ads once a purchase is made. Please fix this!
By CyndyLou2

I HAVE THE GAME, CAN’T PLAY NOW!

Before I played and I had the game but now it won’t let me play so I lost all my progress and I’m still unhappy because I can’t play.
By very fluffy kitten