In addition to enhanced graphics and sound, this smartphone version also marks the title's overseas debut. Drawing upon the roots of the series with such features as beautiful 2-D pixel art, a battle system involving job change-based character growth and ability combinations, and a classic story of light, darkness, and crystals, FINAL FANTASY DIMENSIONS delivers the best of FINAL FANTASY, retro and fresh alike, directly to you. We hope you enjoy this wonderful new addition to the venerable FINAL FANTASY series. ---------------------- The game's prologue--the first arc in the story--is available for you to enjoy as a free download. Subsequent chapters are available for purchase via the shop menu. You can also switch background music from the game using Chiptune Arrange functionality! Chiptune Arrange is also available for purchase in the shop. Just select "Chiptune BGM"! If you're not convinced, try arranging serveral background songs in Chiptune before you buy! Just Select "Arrange" from the "BGM Type" option in the Config menu! It's that easy! ----------------------- Prologue: Available for free! Chapter 1: Reckoning $1.99 Chapter 2: The Generals Approach (Contains the Dragoon, Ranger, Bard, and Dark Knight Chapters) $4.99 Chapter 3: Warriors of Light and Darkness (Contains the Memorist, Dancer, Paladin, and Ninja Chapters) $4.99 Chapter 4: Twilight $4.99 Set: Chapters 1–4 $13.99 Chiptune BGM $4.99 ---------------------- Compatible with the iPhone4, iPad2 and later. Compatible with iOS5.1.1 and later. Universal application, also compatible with Retina Display. Due to the use of a universal aspect ratio, portions of the game screen may appear black on some devices. 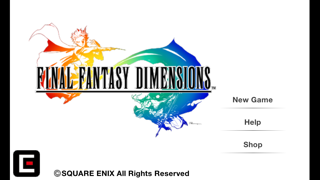 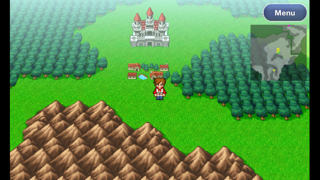 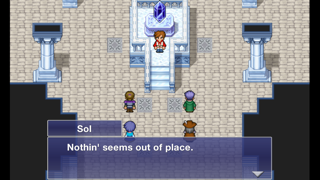 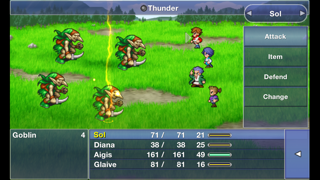 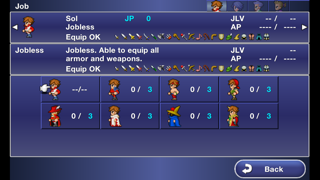 FFD is a great game in the series. It has vibrant colors, great story, fun characters, classic battles, and the rest of the great tropes that final fantasy is known. Now however, it suffers from the same flaws that many FF games on IOS suffer as well. To name them would not do those who found them any justice because their voices have have fallen on deaf ears for months and even years. All one has to do is read the previous comments of most of the mainline FF games and the issues will be laid bare. I will again write my concern within these archives of praise and concern but this time another game joins the fold of past problems. FFD was a full screen game and now the resolution has been reduced. This games joins FF1, FF2, FF5, FF6, FF7, and FF9 insomuch as this is a persistent problem that has not been resolved or even addressed for a long time. I again ask what I asked on the July 2020 update of FF7. Square, do you read these reviews? Do you respond to your customers praise and concerns? Do you care?
By Schattenmeister001

What a rip off

They get you sucked in with 10 minutes worth of gameplay for free. Then you have to buy the next chapters if you want to play the game. Don’t waste your time if you are looking for a free game
By morbid_one

The old school FF1-6 feeling of gameplay with the sprites, equipment, and diverse party is great. The in-depth job system expands on what III and V built allowing you to really build a party of your own. Finally, the story, splitting into two teams and allowing you to experience two separate, concurrent stories was a really enjoyable part that made it so the game never felt too grindy or too mush of a slog since you could grind a few lvls/job lvls and then swap to the next party for a breath of fresh air. Only thing it lacks is a post-game since it is just 3 bosses repeated with no real reason past that. Still a solid optional challenge compared to other titles... looking at you FFVI.
By ChrisCat04

I gotta say I didn’t regret buying this, the story was a good inspiration, the characters are what most of the previous casts of characters don’t, and they were interesting, and the gameplay is really fun and challenging, you should at least play through it once.
By ThunderKeyblade

Controller support. ❌ Native keyboard support❌ Resolution support for larger iPhones. ❌ Apple TV support. ❌ Square enix charges for a game that gets no updates. Technology is changing. Please keep up with it. You've been known to keep up with the pace but know he company is falling behind on all their FINAL FANTASY games. They might be spreading themselves to thin.
By Slice0flife-

Ahhhhhhhhhhhh there is monster in the game

That game was flipping fun
By isusujs

Some issues after you purchase than delete game...

Overall, this is a call back to the classic formula utilizing job classes and unique character building that really began to kick off after FFIII. Though this game is more like a tribute, example: remember “dragoons” and “crystals”?!?! I played through it and paid for all the chapters; which is roughly the cost of most Squarenix mobile games on here. However, I didn’t think that after I deleted the game that if I wanted to unlock all the chapters I already paid for, that I would be prompted to pay again?!?! That’s kinda dirty guys! Maybe you can fix this or idk acknowledge that I paid over twenty dollars for if at best an average game with a basic save the world premise. Come on!
By AdoomCusack

No. pay to play

I HATE pay to play games. CEO of Square Enix. We need to come up with a way to make money off of this game. Employee. How about we just make it look like it’s free.Then, we make them pay a lot of money just to play other parts of it I hate when they do crap like that.
By RO2007O

Needs cloud saving. Would be five stars if I could save to the cloud

Beautiful mobile final fantasy. Would be perfect with cloud saving
By Talan.S