Discover audio stories that entertain, inform, and inspire. Explore shows you’ll love from entertainment and comedy to news and sports. Features: • Stream millions of shows, from the biggest names to the best independents. • Access premium shows with subscriptions. • Follow shows and save your favorite episodes to your library. • Play offline and listen anywhere, data-free. • Find all the shows from your favorite creators in one place with channels. • Continue listening on all your Apple devices and see your latest episodes in Listen Now. • Easily discover new shows through expert curation and personalized recommendations. 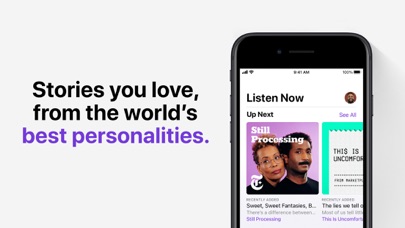 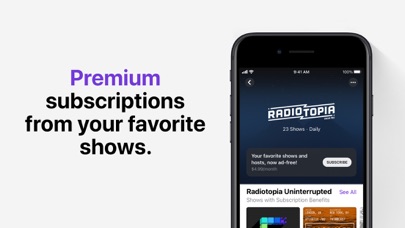 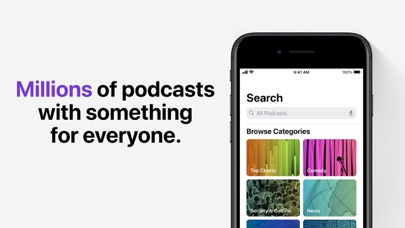 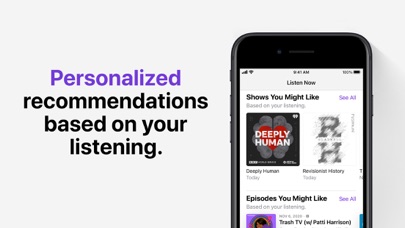 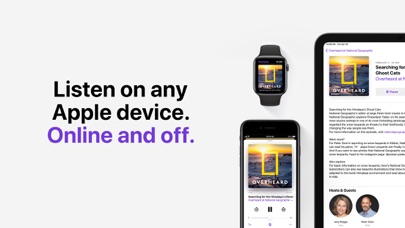 Apple Podcasts is ideally my preferred app. However, my biggest issue that you can’t easily remove episodes from Up Next. It’s frustrating because the “hide played episodes” feature does not work smoothly. In the mornings when I’m trying to plan my listens for the day, it’s cumbersome and sometimes I choose an audiobook because the app doesn’t let me easily remove episodes I don’t want to hear. Can this be fixed?
By JoyfulOne73

The way Apple Podcasts manages the content is so clunky and illogical. Why are we making things harder to use? And more cluttered? So many settings, yet none of them actually help you manage the content well. Deleted podcasts show in the list even after being deleted. Something that wasn’t an issue on older versions, and fully renders this app pointless for me.
By Mcmollie

Where did we go wrong, Apple?

If you are new to podcasts, steer away from this app! This app was never perfect but I would have at least given it 3 stars prior to Apple’s subscription money-grab that changed everything about it. The 1 star I am giving it now is so that I can be a Karen for a moment in my review. I was subscribed to 100+ podcasts and listened to podcasts everyday across my iPad, iPhone, and Apple Watch. Because of Apple changing this app a few months back and not responding to my countless comments about what was happening to me, I have unsubscribed to many podcasts and don’t even care much about listening anymore. 1. I receive weekly (sometimes daily) dumps of podcast episodes I have already listened to from previous years. 2. There is an unreasonable delay in syncing played/unplayed episodes across my devices. This delay will last hours or even days. 3. There are many bugs in the app when pausing or skipping. 4. Sometimes just opening the app screws up everything I’ve added in my Play Next/Play Later feed. 5. There are countless delays in updating episodes in my library - sometimes my iPad will show a new episode from a podcast but I won’t see that reflected on my phone until hours later, despite refreshing over and over. 6. The watch app has never been good but I could navigate through it somewhat before; it is just trash now. 7. I could go on and on but they don’t care. I’ve left several comments through Apple support and have never received a response. I would consider myself a super-user so I thought that they would want to respond but I guess not. I think that I just need to look into an alternative at this point. It’s such a shame because things worked much better before.
By Freddy Peterson

The updated version of this app is the least user friendly I've ever dealt with. It's like someone is trying to get me to stop using the app. I HATE the extra play now screen - this step is 100% unnecessary and when driving makes it almost impossible to easily select the next episode of the podcast (which doesn't play through anymore, instead going to a list of up next podcasts that are full of stupid promo updates vs content). Where is the setting that allows me to play through an entire series in the order of the episodes vs newest first? No, I don't want to play episode 8 after listening to episode 1.
By CMH87

Used for years with little to no problem but now nothing downloads. I have plenty of space! Only downloads I have is Twitter and music not even a single photo or other app.
By Xxxcghu

This is becoming unbearable, truly so. I’ve read all the bad reviews so there’s no way that the app developers aren’t aware of the insane issue. I can’t even pause the episode for 10 minutes that when I get back to it, the feed has reset, erase episodes I I’ve just lined up for listening an hour earlier, and it stars playing whatever. I’m too use to this app and don’t have any interest in switching to another, but if this isn’t fix very soon, I’ll have no choice. It’s truly nerve wracking. Please, fix it before you lose everyone.
By ITwastoken

The app used to be fine for what it was and it seems as if every time a new feature is added, the actual useful features are then ruined. There is no way I shouldn’t be able to add podcasts to my queue without them being removed every time I close the app!
By JTeeeeeeeeeezy

What neostryder said!!
By Tony H

I absolutely HATE this app!!! I can’t listen to any of my podcasts without this app force closing every five F*&$@!G minutes!!! My god!!!
By K'Flamin

I used this app daily for years and listened to thousands of hours of content. The recent “update” made the interface unusable, so I switched to Spotify. Hopefully that works out better, but I would have preferred to stick with Apple old podcast interface.
By Phillip042