Are you ready to take your rhymes to the next level? With AutoRap you always have a platform to share your raps and rhymes. Duplicate your favorite rap album with your voice or use top beats to make something all your own. Choose from over 100+ beats by top artists like Cardi B, Post Malone, Drake, Eminem, Dr.Dre, and more or explore creations by other rappers in the community. Share your raps with friends, build your audience, and enjoy competing with creators just like you. New to making raps? Start with the proprietary ‘Talk Mode’ feature and play around as you build the confidence to make a full rap flow. Write lyrics into the app to keep track of your songs and prepare for your next AutoRap battle with a fellow creator. Create unique raps in just a few taps Create a rap track in just a few easy steps. Just choose your beat and go for it – AutoRap provides high-quality audio for your recordings and make them sound smooth and polished. Try Talk Mode for instant pitch-correction fun Just speak into your phone’s microphone and listen as AutoRap morphs your speech into a unique rap with pitch-correction and a beat-matching flow. Practice and improve your flow with a variety of beats Choose from a large library of instrumental beats— from all-time classics to the latest and hottest hip hop & RnB hits. Or check out something totally unique from community uploaded beats. We add new beats to the songbook 3 times per week so there’s always something new to try out. Meet and compete against other rappers Rapping doesn’t have to be solo. Join the AutoRap community and get inspired by other creators with the same passion. Share your raps, meet new people, and make a name for yourself with every rhyme. Take on challenges from other rappers or create one of your own. Once you complete a challenge, Autorap blends the rap-offs into a single track for a direct comparison of your unique styles. Bring your own beats to create original rhymes Have an original beat of your own? Upload it to AutoRap to seamlessly lay your verses on top. You can even encourage other rappers from the community to try it out and create something with your beat. Hundreds of other producers are already on the app collaborating on new beats. Share your raps and grow your audience Rap your truth and share what matters to you. Whether you have a lot to say or don’t know where to begin, your story matters. Share your recordings on social media so your friends can see and support your rhymes. Invite others to join and try a new way to create and have fun. Features Free Beats: Choose 3 free beats every week to switch up your skills Talk Mode: Instantly turn your words into an pitch-correction rap song Rap Mode: Practice and improve your freestyle verses and rhymes Rap Battles: Show off your skills and compete with your peers in the community Lenses: Level up your rap recordings with audio and video effects made for self-expression Bring Beats: Upload your own beat or explore what others have created Leaderboards: See top tracks from the community and grow your following through contests and challenges Remix: Recreate your rap in different beats Community - Join thousands of other rappers and link up with inspirational creators VIP SUBSCRIPTION - Subscribe to VIP to get unlimited access to ALL songs, beats, remix table, and more! - Payment charged to iTunes Account at the time of purchase - Subscription automatically renews unless auto-renew is turned off at least 24-hours before the end of the current period - The account is charged for renewal 24-hours prior to the end of the current period at the cost of the current package - No cancellation during the active subscription period - Read our privacy policy at https://www.smule.com/privacy - Read our terms of use at https://www.smule.com/termsofservice Self-expression starts when you show up. Download now and show the world what it’s been missing. 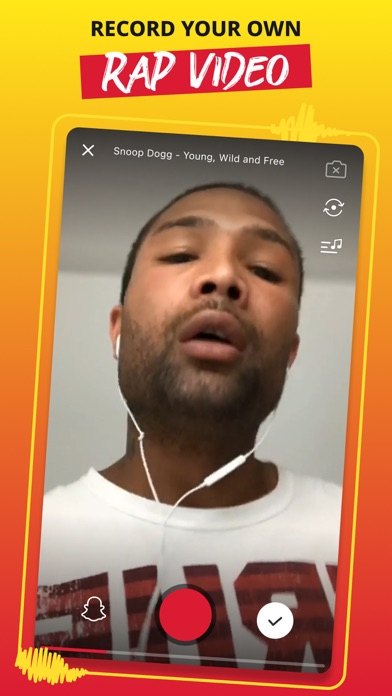 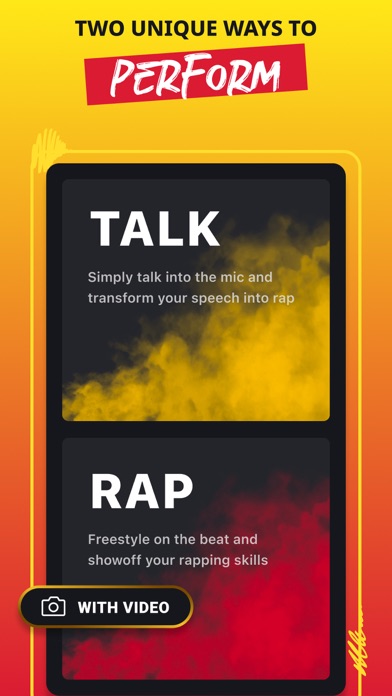 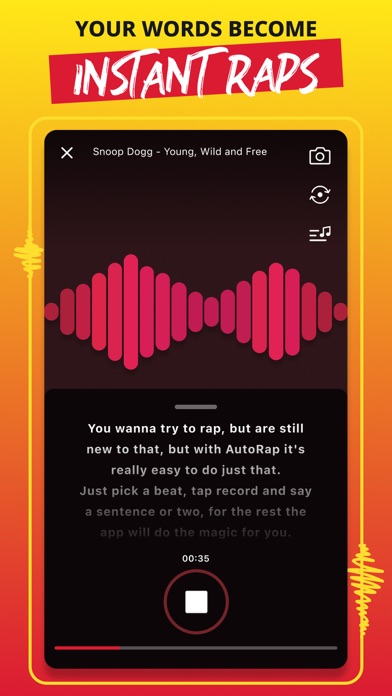 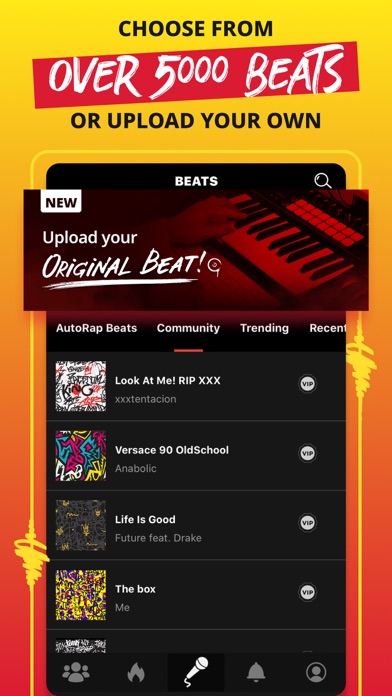 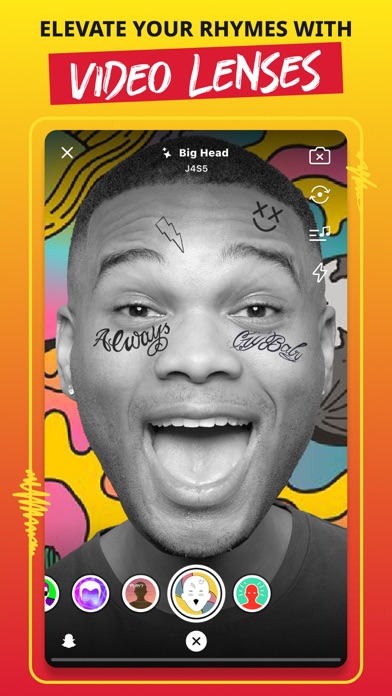 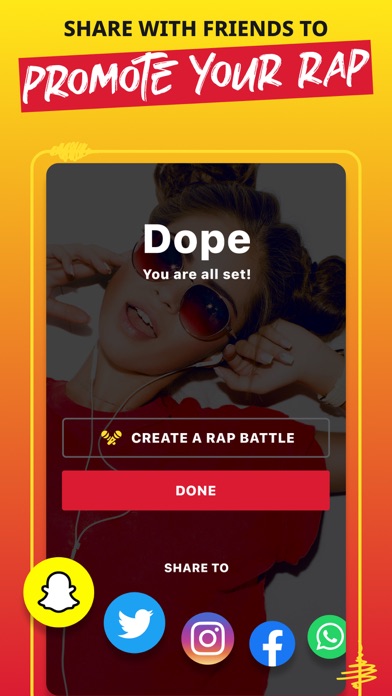 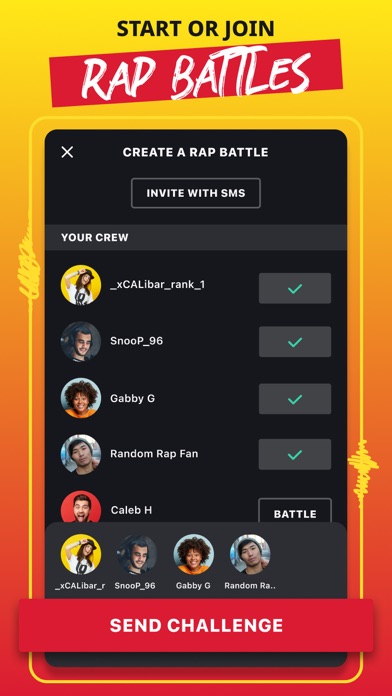 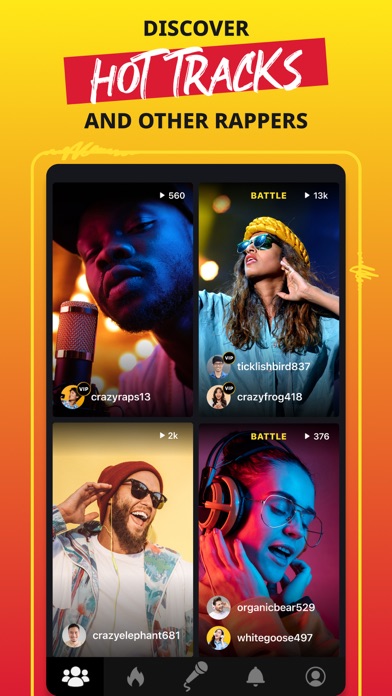 This app is so bad that it doesn’t even deserve more than one star!!!!!!!!
By Aldous Snow

Don’t listen to all the MEAN reviews! I love this! Keep on making more! ❤️🧡💛💚💙💜 5 STARS! There could be more though. Maybe you could make some of the songs free? After you play it for an hour, the songs get repetitive. It’s okay! YAYYYYYY!!
By Kennedy/kay kay

Horrible game in the world

So here is why I rated a one star: So I was looking at music games on my phone I saw this game and when I downloaded it the app wants me to set up an account but on the app itself it says don’t need to set up an account.So they are lied about that.And please don’t lie about apps.If we don’t have to say up an account I would play so that is why I deleted it and gave it a one star please fix the bug!!!😡😡😡
By zoey perfect girl

Why did you change it :(

I liked when it was singing I mean it’s good as rapping but it doesn’t have that feeling anymore it used to have :(
By maleah.p

So when I first used the app it was really cool but later it glitched. So when I wanted to make a song but it just got stuck:(
By awsome cool crazy cooool

I Love you about night 😔😇🤝😘 boy friend 🤓
By fhgghu

The app is ok

Earning plays is much harder than it needs to be

There are no other ways of earning play points so technically it could’ve left thousands of users playing this app if you could earn plays much faster or by playing the app. The only way to earn plays is that if you win a rap battle in a single round.
By SanicRider

Won’t let you use app unless you give your information. Email or google or FB .
By Cleute

It gets a 10 and I love it. Super fun app. Are you need to do is download it and get a username and password for free from there you hop on to the different rooms, genres, and you make raps. People can go to your page and reply to your raps and they also go into a newsfeed where you can view other peoples raps and reply to theirs. Other users can listen to your rap. If you feel like being Eminem on the battlegrounds this is the rap app for you. Find me Rjoshua21
By RJoshua