BTZS ExpoDev is the companion app for BTZS Plotter for Windows that allows you to more accurately expose traditional B&W films using film test data from BTZS film tests. "BTZS meets the iPhone. It's the perfect match of Phil Davis' BTZS with the same device that the rest of my life is on." - Robert Levittan "It has liberated me from having to worry about my negatives, so that I can direct my attention to the important process of making a photograph." - Laura Campbell "Liberation for the traditional film photographer." - Bill Waldron *** Note: This app cannot be used without having your own BTZS Film Profiles that have been analyzed and exported by the BTZS Plotter for Windows application. *** BTZS ExpoDev is the newest generation of ExpoDev for Apple iOS devices. ExpoDev allows you to use your BTZS test Film Profiles to accurately calculate B&W film exposures in the field for consistently exposed negatives that are easier to print in the darkroom. ExpoDev was designed for Large Format film photographers working in any traditional or alternative process (including hybrid processes such as film scanning). Among the many features in BTZS ExpoDev are: ◆ An exposure record keeping system to keep track of all of your film exposures, allowing you to view the exposure details and the development time to use when back from the field ◆ Manages your lists of Film Profiles, lenses, and filters for fast & easy selection when making exposures ◆ Support for both BZTS Incident and traditional Zone System metering methods ◆ Interactively calculates the SBR, Average Gradient, and the EFS for each scene while metering ◆ Support for user-specified filter factors and Large Format bellows extension compensation ◆ A powerful Depth of Field calculator with selectable Circle of Confusion that supports 3 DOF calculation modes (Aperture/Distance, Near/Far Distances, and Focus Rail Spread) ◆ DOF calculator supports both metric and imperial measurement modes ◆ Calculates exposure by either selecting the Aperture or Shutter speed to use ◆ Supports Apertures down to f/2048 (perfect for pinhole work) and Shutter speeds up to 6 hours ◆ An integrated exposure timer than can handle exposure times up to 12 hours ◆ Sophisticated reciprocity failure adjustments for both exposure and development time that are based on lab-produced data for over 90 film and developer combinations ◆ and more... Note: Sample Film Profiles are available for experimentation but they are not a substitute for personal film testing. 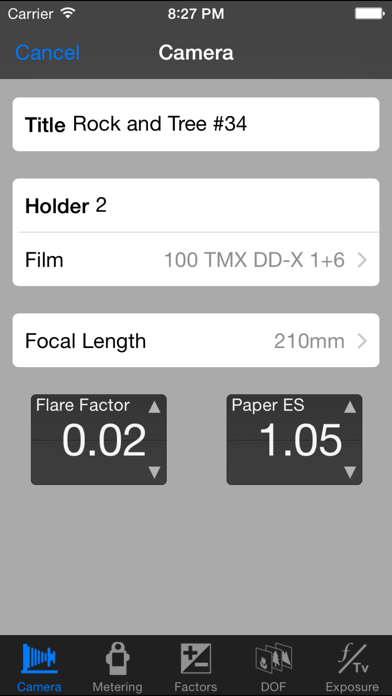 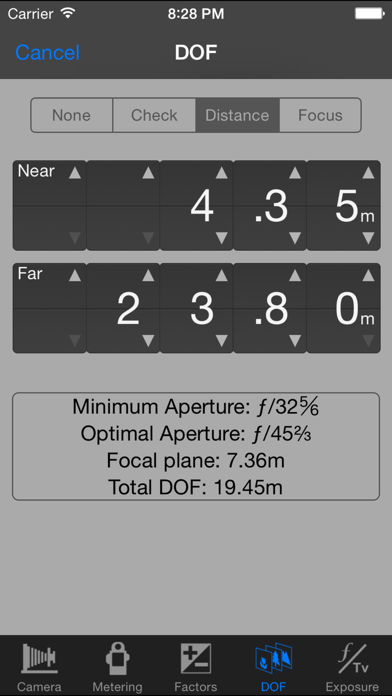 Expo dev finally ported to iOS. This app is a fabulous tool for BTZS users and zone system users alike. You will need your film data from the BTZS Plotter program or you can have the view camera store expose and test your developed film. My previous film data imported flawlessly into the program . If you are a large format photographer, don't leave home without it. I am thrilled with this program.
By rskmd83

ExpoDev is truly a remarkable tool to have in the field. The app, combined with my personal film test data, has in a sense automated the process of large format photography for me. It has liberated me from having to worry about my negatives, so that I can direct my attention to the important process of making a photograph. With the ExpoDev app, a hard day's work in the field pays off in the form of an easily printable negative.
By Laura_Campbell