The MLB App is the #1 destination for live baseball video and audio served directly on your iOS device. Watch and listen live or on-demand! **** MLB APP SUBSCRIPTIONS **** The MLB App offers two subscription options for its extensive premium features, covering live MLB games from Spring Training to the World Series. - Yearly recurring fee of $19.99. - Monthly recurring fee of $2.99. - MLB.TV subscribers receive the MLB App's premium features for free. **** 2021 FEATURES **** (NOTE: Additional features and functionality will be available in regular app updates throughout the season. Make sure to keep the MLB App updated to take advantage of these as you follow your favorite team and players.) -- Watch and Listen Live -- • Watch the MLB.TV Free Game of the Day (subject to blackout restrictions; no subscription required) • Access your MLB.TV All Teams subscription to watch every out-of-market game (Subscription required) • Watch in-game highlights (No blackout restrictions; no subscription required) • Listen to both Live and Archive Home, Away and Spanish-language (where available) radio broadcasts (MLB Audio subscription required) • Watch 60fps video for unmatched high quality streaming of select live MLB.TV broadcasts • Watch Condensed Games (MLB Audio subscription required) • Multitasking split view (select iPads) • New playlist video screen with autoplay video • MLB Film Room - Search millions of videos • Picture-in-Picture streaming for live video and highlights • Multi-platform live audio access for MLB Audio subscribers (portable to Mac/PC and to the MLB skill on voice activated platforms with a valid MLB.com account) • Universal support for MLB Audio subscribers, accessible on iPhone, iPad and other supported smartphones and tablets • Watch MLB Network programming (pay TV authentication required) -- Follow Your Favorite Team -- • Enhanced, Gameday pitch-by-pitch features, including realistic ballpark renderings from all 30 MLB parks • Breaking news, schedules, interactive rosters and player stats for every team • Sortable batting, pitching and fielding statistics • Customize your iPhone and iPad screens with MLB Club-branded app icons • Designated your favorite team to be featured in MLB App's home screen, scoreboard, news and video • MORE THAN JUST GAMES - Explore an expanded library of programming that goes beyond highlights and interviews with a full range of features, documentaries, and classic games from MLB, MLB Network and our partners. (MLB.TV subscription required) • Search function for all active and historical MLB player cards • Closed captioning for live video • Application available in Spanish language, requires device language set to Spanish Access MLB Audio for $2.99 per month or $19.99 annually. You will be automatically billed $2.99 through iTunes every 30 days or $19.99 every 365 days until you cancel your subscription. Stream MLB.TV Monthly for $24.99 per month from March through and including October. You will be automatically billed $24.99 through iTunes every 30 days, through and including October, until you cancel your subscription. Your subscription will automatically renew annually on or about March 1 for the then current-year’s regular full monthly price. Stream MLB.TV Yearly for $129.99. Your subscription will automatically renew annually on the anniversary date for the then-current year’s regular full yearly price. Subscriptions automatically renew unless auto-renew is turned off at least 24-hours before the end of the current period. Subscriptions can be managed and the auto-renewal may be turned off by going to the iTunes Account Settings after purchase. No cancellation of the current subscription is allowed during active subscription period. Privacy Policy: mlb.com/privacy Terms of Use: mlb.com/tou © 2021 MLB Advanced Media, L.P. All Major League Baseball trademarks and copyrights used herein are the property of the applicable MLB entity. All rights reserved. 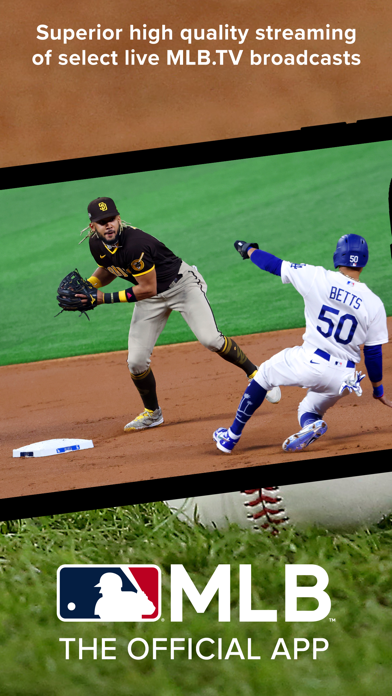 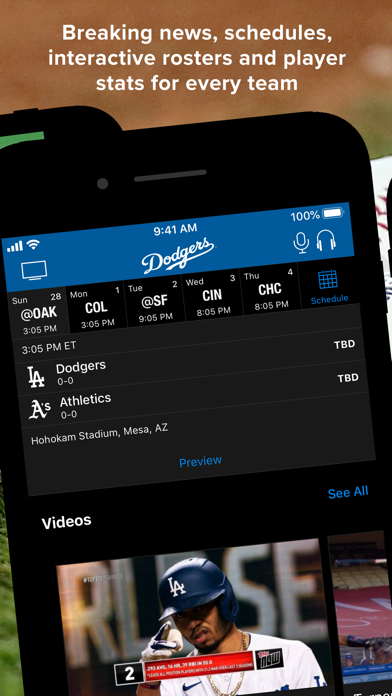 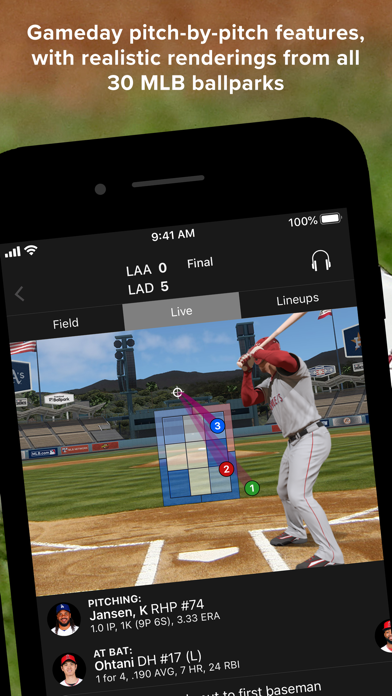 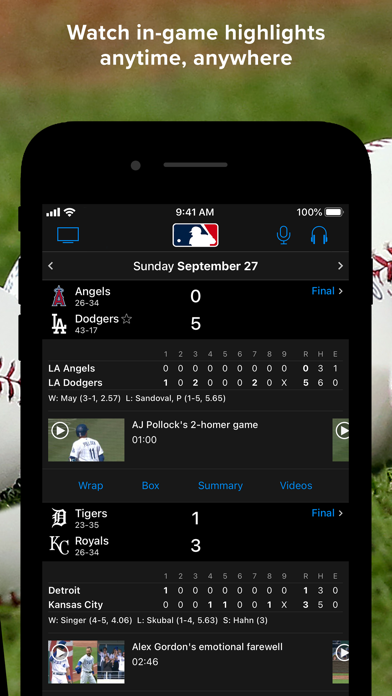 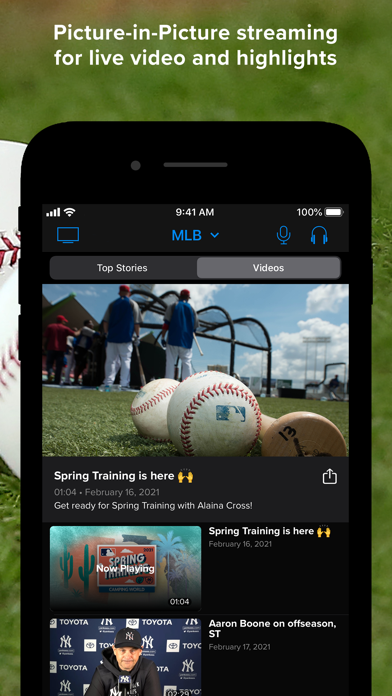 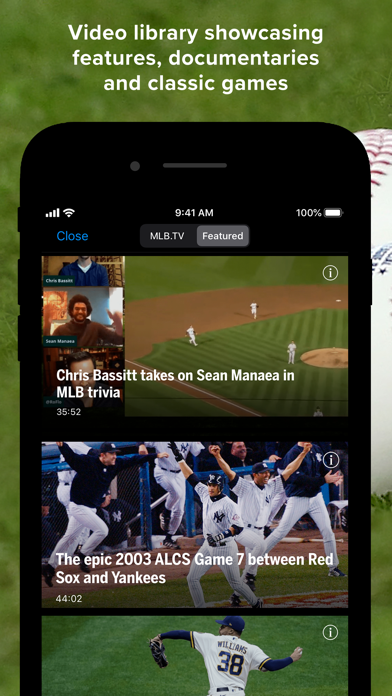 App has been broken for quite a few updates now. Listening to radio broadcasts is hit and miss anymore. Sometimes it works and sometimes it doesn’t. Want to watch the condensed game, video highlights or the game recap? Sorry, not going to happen. 95% of the time you try to watch a video it says “video playback error” “an error occurred during the playback of video” On the miraculous 5% chance you DO get to watch one of the videos, trying to rotate your screen to accommodate a full screen video is next to impossible. Want to read the articles? Good luck! It tries to auto play the videos all the time and you get the obnoxious “video playback error” pop up. Update: can’t even include enough information in the “contact us” form they asked me to fill out. Apparently has a 300 character maximum. Found that out after wasting time typing a lengthy description of the app being broken.
By Malibu1320

Getting to any games video feed is difficult because it is well hidden from a specific teams ‘home’ page and the ‘scores’ page on both iOS apps for iPad and iPhone. Also things like a navigating to a teams page, a teams roster, transactions, coaches etc. are also difficult to find and execute. Video highlights and full games don’t respond when you try to use the slider, the video freezes on the frame and the audio keeps playing. The app was great in the past but oh man does it stink and has taken sever leaps and stumbles backwards. Please fix!
By Byob555

Live this app and have for years but for 2021, when I try to stream, it says welcome back and asks me to press continue but this does nothing. Please fix and I’ll gladly change this review and select 5 stars Update: 1 week into the 2021 baseball season and the app still won’t stream games. Fix this so we are getting what we pay for!
By HoneyBadger210

Ads, Ads, and More Ads that take forever to load

30 second load times for 15 second ads to watch a 12 second highlight. Not cool.
By Eftwood

The App does not allow full screen when watching live games.
By stokesjm

So apparently in my area all of the Astro’s games are blacked out due to restrictions. While replays and clips work great, the live TV was going to be my main draw and it doesn’t work.
By RickyD23

Half the stuff on this app doesn’t work, I have a new phone and latest Ios version... once again the mlb app falls short of all other sports apps
By knuhgfvgfyhgddggddffjhgiii

I don’t watch baseball because it’s such a boring game. But the reason I’m giving this one-star review is because of MLB’s misguided action in removing the All-Star game from Georgia. Hope their action takes a declining game into accelerated demise. Hoping their cancellation of Georgia Sparks the cancellation of baseball by more and more Americans.
By Jay112323

Streams are decent on iPad, does have to buffer often which limits quality. But the app can barely stream to chromecast. Video freezes and buffers every 10-30 seconds causing delay and poor quality. After 30 min to an hour the stream will be a half inning or more behind live time, it’s pathetic and almost unwatchable. I basically only use the app to watch and cast games and this app has a hard time doing that. It’s unfortunate since I’ve been an mlbtv member for 5+ years.
By jemory45

Worst buffering issues of any app

It’s impossible to watch a game on tv when casting from the app. It’s constantly buffering. It’s been this way for years. It’s definitely the app because I have no other problems with other apps and casting from a laptop works fine when it doesn’t cause Chromecast to crash.
By soulcoughi