iTunes Movie Trailers puts the newest HD movie previews in your hands. Browse trailers, clips, and featurettes for the biggest Hollywood blockbusters and independent cinema, view stunning HD photos, explore a year-long calendar of movie releases, find showtimes near you, and get ticket info directly from your iPad or iPhone.    Features:    • Access hundreds of movie trailers, clips, behind-the-scenes featurettes, and images, available in HD or SD  • Explore an interactive, year-long release calendar that helps you plan when you'll be going to the theaters  • Save your favorite movies and theaters for immediate access anytime  • Find out what’s playing at your local theaters and purchase tickets directly from your iPad or iPhone  • Check estimated driving times and get directions to nearby theaters  • Add a movie to Favorites to be notified when it debuts in theaters or becomes available in the iTunes Store  • Browse Top Charts to view the most popular trailers, box office rankings, and top movies on iTunes to buy or rent  • Read critic reviews provided by Rotten Tomatoes without leaving the app  • Enjoy your favorite movie trailers on your TV with AirPlay and Apple TV  • Share your favorite trailers with friends using AirDrop, Facebook, Twitter, Messages, and Mail  • Keep your favorite theaters and movie trailers up to date on all of your devices using iCloud   Requirements:   • Requires a device with iOS 9 or later  • Requires Internet access over a Wi-Fi or cellular data connection How Your Data Is Used When you have iCloud enabled, iTunes Movie Trailers stores your favorite theaters and movies with your iCloud account to keep them in sync across all your devices. 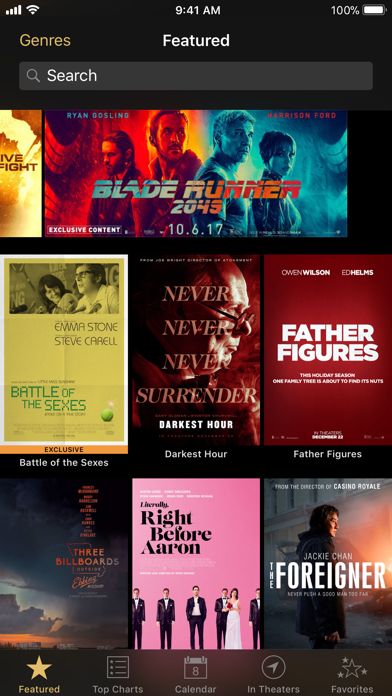 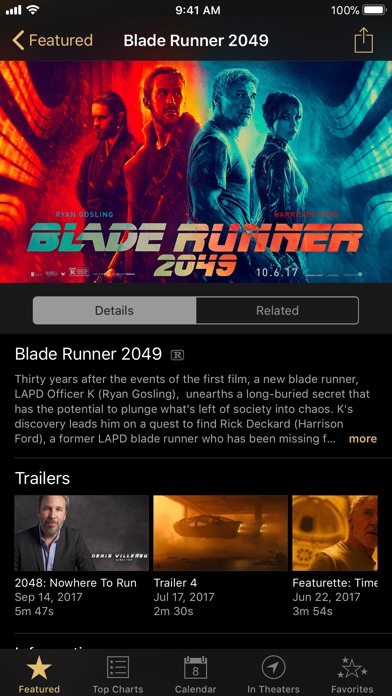 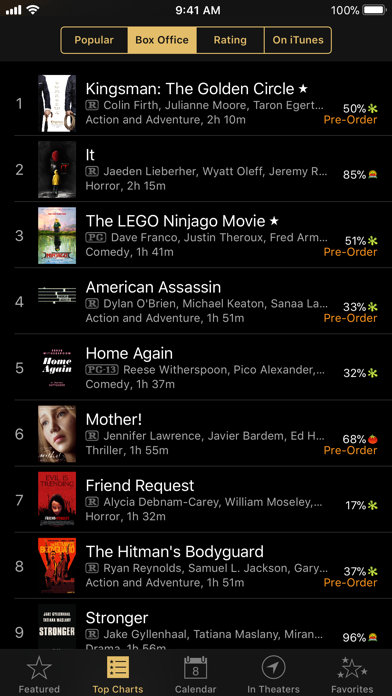 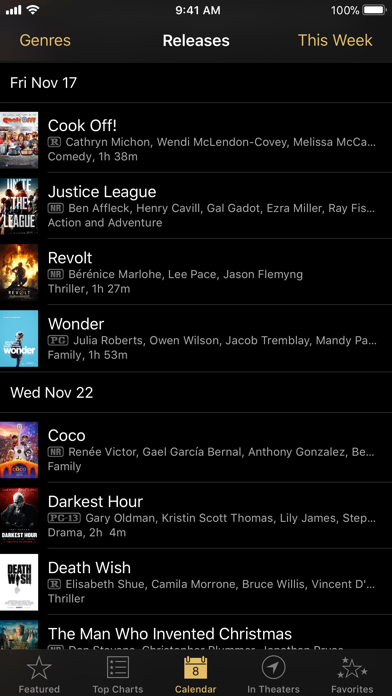 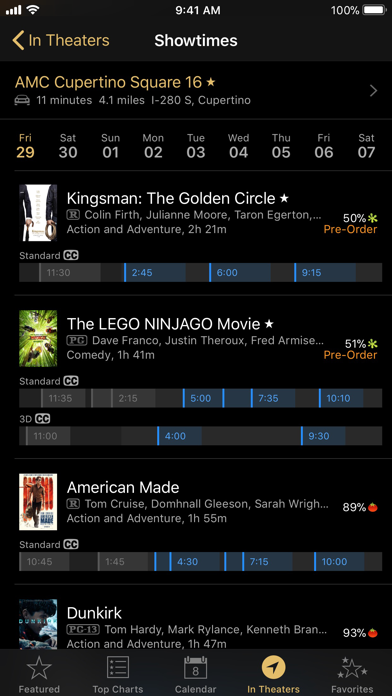 It would be nice if the trailer can play one after the next automatically instead of going to the Apple remote every time to go through trailers, there should be an option for that
By peedee211

It’s been 2 years, and this app is yet to fit the I pad pro screens correctly!
By JLJMW

Almost There but no real updates for years

Need to have a way to know what trailers I’ve watched. Also, it’s hard when the order keeps moving around. Would love to have a way to exclude specific genres like horror and documentaries. I check my usage recently in this app was up 200 MB data in addition to the 5 MB of the app. This poster cache is too much. Cut down below 100MB. This app takes to long to download trailers and load favorites. Please increase server bandwidth. I have 50mbps down and it is slow. When I go to favorites (and it actually works (25%)) and then theaters, there is no way to click on one of the theaters to see the times for the movies there. The only option is to see the movies. Make Favorite theaters like the In Theaters tab. Missing full dark mode support. It was just black to begin with.
By munpip214

I mark movies as favorites after watching the trailer so I have a list of movies I can refer to later when I want to watch something. But the favorites list hasn’t worked in more than a year now. Please update your apps to at least work.
By Cade89

What happen to this app? This seriously needs an update to be accurate and show all the local theaters not just the ones it selects automatically
By bjw.29

Because this app hasn’t been updated in years, it’s pretty much unusable due to continual freezing and buffering of the trailers as they “play.” The only use it has is to see which new movies are coming out so I can go over to YouTube and watch the trailers. Unfortunately, the app only shows the movies its creators want you to see, so if you limit yourself to their selections, you’ll miss out on some really great movies.
By Confusion Fusion

Rotten Tomatoes is not legit

A local theater here in Maryland often plays films from India, Korea, and other countries. As of today, Jan 25 2020, there are five films in Hindi and one in Japanese. None of these films are listed in Trailers as currently playing. I don’t know where Trailers is getting its showtime data, but it is definitely incomplete.
By LelandJ