Goodbudget is a personal finance app for budget planning and money management. Share a budget with sync across multiple phones (and the web!). MANAGE MONEY WITH PEOPLE YOU LOVE Goodbudget is perfect for sharing a budget with a spouse, family member, or friend. Sync across multiple devices including iPhones, other smartphones, and the web. * Transactions synced with the cloud and accessible from other devices, including Goodbudget's web app! * Stay on the same page about finances with those close to you * Your data is automatically and securely backed up to Goodbudget's website * Download transactions to CSV (on website) INSIGHTFUL REPORTS Goodbudget helps you make sense of your budgeting and spending with in-app reports. * Know how to modify your budget after analyzing reports * Spending by envelope report (cool-looking pie chart!) * Income vs spending report * Even more reports on the web A PROVEN SYSTEM Goodbudget is based on the envelope budgeting method. But with no physical envelopes...only virtual envelopes! * Check envelopes balances (aka how much you have left to spend) while you're on-the-go * Expense tracking optimized for speed * Proven cash envelope budgeting method * Track your bank balances in addition to envelope balances * Live within your means * Schedule transactions and automatic envelope fills Ad-free, Free Forever version includes 10 regular envelopes & 10 annual envelopes. Use envelope budgeting to plan your spending, not just track it! ================================ SUBSCRIBERS GET MORE FEATURES! ================================ * Unlimited regular envelopes * Unlimited annual envelopes * Sync up to 5 devices * 7 years of transaction history * Personal and friendly email support Subscription automatically renews unless auto-renew is turned off at least 24-hours before the end of the current period. Payment will be charged to iTunes Account at confirmation of purchase. Account will be charged for renewal within 24-hours prior to the end of the current period, and identify the cost of the renewal. Subscriptions may be managed by the user and auto-renewal may be turned off by going to the user's Account Settings after purchase. If you're looking to track where your money goes, plan your spending, or create a budget that works, try us out! Goodbudget: Budget well. Live life. Do Good. Features, bugs? Please email us at support@goodbudget.com! We're happy to help! ** Leading personal finance app downloaded over 2,000,000 times AND previously featured by Apple, The New York Times, Forbes, CNET, LifeTime TV, The Boston Globe, and Lifehacker ** 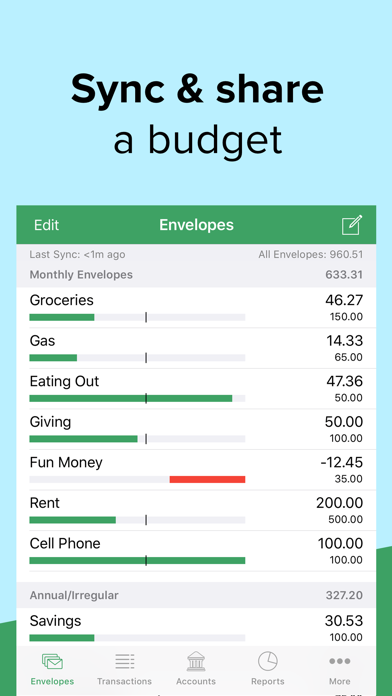 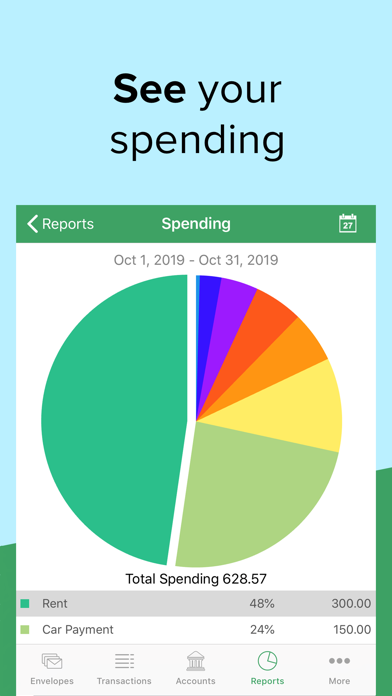 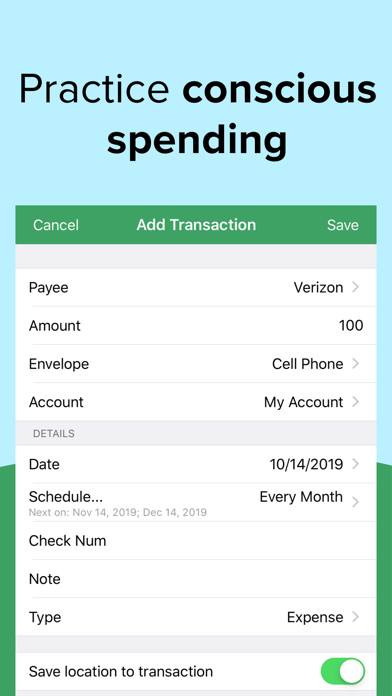 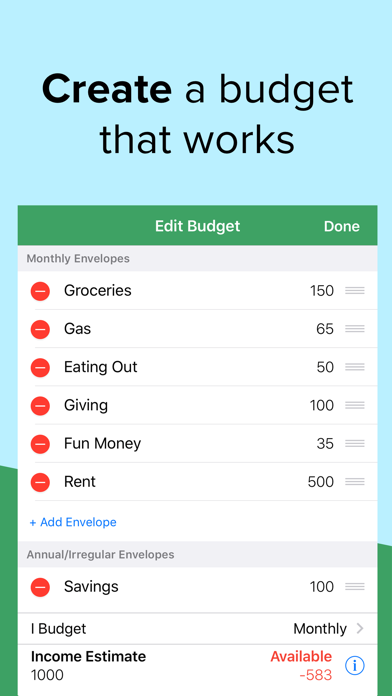 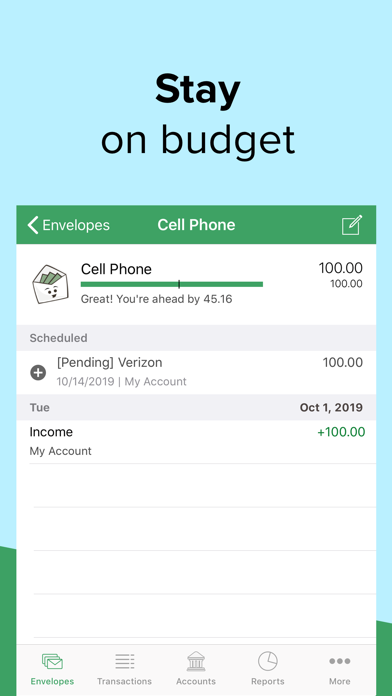 This app is exactly what I wanted for budgeting. Regular budgeting apps made no sense to me, since I typically don’t spend over $5 a month on coffee and didn’t need that kind of budget, but maybe one month I’m traveling a lot I might spend $15 on coffee. The lack of rollover would frustrate me on other apps. This allows me to have a single savings accounts, but know how much exactly I have budgeted for certain thing, which is not everything in my savings. I used to hate the manual inputing of transactions, but now that I have the hang of it I don’t mind it since it gives me time to make sure my statements are correct. The reason I gave this 4 star though is that I wish there was slightly more customization. Your options for envelope savings are irregular/annual and picking ONE other way (monthly, biweekly, etc). This doesn’t work well for me since I budget my rent monthly, my grocery’s weekly, and my insurance every 6 months. I wish in the premium version, at least, they had the option to break down the way you want to budget envelopes in more depth. I would immediately purchase it then.
By turrnthepaige

Extremely Annoying to Use

If I had known how time consuming it was going to be to use this app I would never have paid for a subscription. There are a number of features that would make this app much better and easier to use. One would be a button that automatically fills all your envelopes to the budget amount. Instead you have to do this individually. With like 30 envelopes, this ends up taking like ten minutes. And if you accidentally fill an envelope twice, there’s no way to delete a transaction. Instead you have to create a new transaction to remove that extra money. Very annoying to use, do not recommend. At this point it would have been faster for me to do this the old fashioned way with pen and paper.
By ~firstmin

Excellent app & thanks for the updates... wish it worked on an iPad, too!

I use this daily and it keeps our finances on track between my wife and I. It also allows me to daily reconcile accounts at our bank. The iOS 9 update is great and the compatibility with the iPhone 6 Plus was really needed. Thank you. Great update and nice to be able to schedule my transactions. There was a bug with scheduled payments which is now fixed. Thanks.
By TheIversens

Good, but need to understand functions.

Goodbudget offers a traditional approach to spending, while implementing the method in a conveniently-functioning app. Its envelope system allows you to fill set amounts of money into a virtual envelope, in which can be labeled and directed towards different areas of spending. Reports are provided so often on said areas, and visual aids are included with these reports so that tracking spending is easier to conclude. There are several benefits of using this app, one being that setting goals of spending are manageable and uncomplicated. With this, a threshold can be recognized and spending can be limited. Transactions of both expense and credit can be made anytime. Virtually anything can be set to an amount - the amount spent, the goal to save, transactions, income, and even balance. Some downfalls came to the app, however, when noticed that only a set amount of envelopes were allowed to be created, and transaction history was automatically deleted over time. This could only be changed after paying a subscription to enable the additional functions. Along with that, the envelope concept is an unfamiliar term today, and likely requires some context or beforehand understanding in order to utilize its functions efficiently and correctly. Overall, Goodbudget serves as a reliable app to track and limit spending, but requires some preliminary learning or understanding as well. To improve their app, I would suggest that they include a sort of tutorial to help new users better understand the interface and functions of the app, and possibly include more visual aids along with that.
By Marcus273817

My wife and I love this app. No complaints.
By Son of Daedalus

Because there’s no tutorial, I set up a simple mock budget to check out how the features work. I used all whole dollar numbers, no coins represented. Then I saw an odd entry that it wouldn’t let me delete - and I realized how impossible it seems to be to make changes once you’ve gone through the set up. I was redirected from the app to the website, where I was able to delete the odd entry (which I know I didn’t make because it was for something like $1763.49 and I was using exclusively whole numbers, ending in zeros). I deleted that and tried making other modifications while in the browser, and then found that my budget was again showing with a dollar amount that couldn’t have been produced by the numbers I entered. Somewhere - in some place I’ve not been able to locate, yet another budget factor was added for something like and additional 174.99. I tried to find a simple way to ask a question, but I’m not interested in having to go to a forum and poll other users for possible fixes based on their experiences. If I can’t ask a direct question to the people who get paid to keep the app out there, I’m not interested. I can see how this app could be useful, but i don’t have time to figure out how to figure out where these random numbers are coming from. A tutorial is a valuable asset. It’s actually pretty easy to do a budget in excel. I thought this would be an easy at your fingertips alternative, but it’s just too much of a headache, especially with zero customer service. No thanks.
By awakenwp

This app, while being decent at what it’s supposed to do, is very hard to pick up. I deleted it purely on how infuriating it is to properly work. I recommend trying to find something a little more use friendly
By JACKODO10

Has saved me hundreds..if not more

Love everything about this app. Was never a huge fan of linking my accounts to apps and them having my information. I much prefer being more hands-on with my finances, and this app allows that. The envelope method works great for me. Making you log every transaction helps keep you (well, me at least) more accountable and aware of how much money you have spent and have left to spend. The $50/year subscription is worth it to me, considering without this app I’m sure I’d be out more than $50. My one complaint is not being able to edit or add debit transactions on the app, it must be done on the website. This isn’t a huge inconvenience, but I do hope this feature is added soon!
By bunggie96

Need more then one account
By billy bob thorrton

I just wanted a tool to track my expenses and give me a category graph breakdown. Idk what an envelope is. The interface did not explain anything and clicking around just made me more confused.
By lockezwill