Buy. Sell. Letgo. - OfferUp and Letgo are now one big marketplace. Why you’ll love using OfferUp: • The biggest mobile marketplace for local buyers and sellers. • List an item using your phone or tablet in as little as 30 seconds. • Know who you’re dealing with through reputation and safety features. • Browse local items with thousands of new postings daily. • Message buyers and sellers securely from within the app. • Build a reputation with your unique seller profile page. • Browse items by image and sort by category or location. • Join millions of people using OfferUp across the country. OfferUp is the easiest way to buy and sell locally. "I have found several items at a great price on OfferUp, saving me tons of money" - Elaine "We offered up 3 items in minutes and sold them within 48 hours. Doesn't get much easier than that!” - Summer "I made $1,000 by offering up my daughter's unused items on OfferUp" - Claudia Download OfferUp today to sell your used items and discover heaps of hidden treasures. If you subscribe to Promote Plus (1 month) via iTunes: Payment will be charged to iTunes Account at confirmation of purchase. Subscription automatically renews for $19.99 unless auto-renew is turned off 24 hours before the end of the current period. Account will be charged for renewal within 24 hours prior to the end of the current period at the rate of Promote Plus. Subscription and auto-renewal may be managed by going to Account Settings after purchase. Any unused portion of a free trial period, if offered, will be forfeited when the user purchases a subscription, where applicable. Terms: https://offerup.com/terms/ Privacy Policy: https://offerup.com/privacy/ 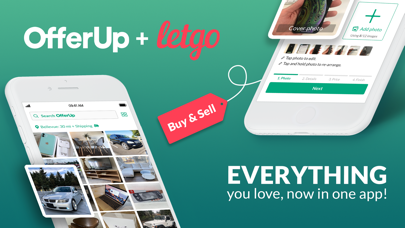 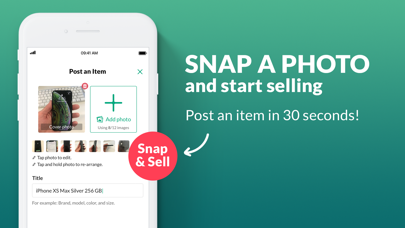 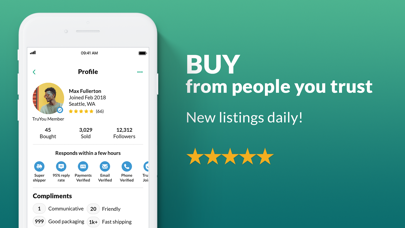 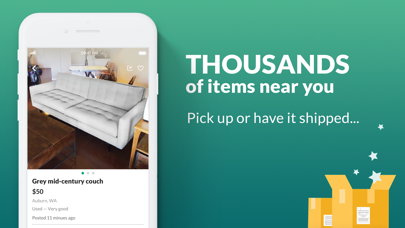 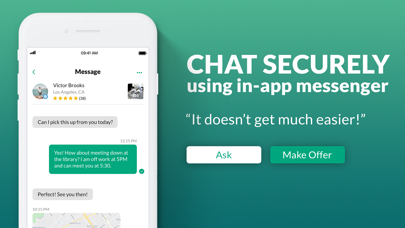 While the app works fine and I generally like the platform there are so many more scammers on this app than other platforms to sell your stuff and even more so since they changed to OfferUp. Literally any time you post something new, someone reaches out to you about texting you a code to text them back which is why it’s my least favorite platform.
By Jess C82

Absolutely awful, i used to be a letgo fan. This merger ruined it. Bunch of fake profiles and scammers on here. You hit pick up only and it still gives you options from across the country. Dont use this. Id imagine the only reason this is 5 stars is because of bots. The app is full of them. Edit: Now they are contacting me regarding this review and it states “this doesnt sound right.” They aren't even aware of their problems. Dear app: folks who have only been members for a few days, are offering a 2015 or newer car for $1,200, and tell you to contact their g-mail instead of just messaging ARE BOTS.
By Rissa106

Is a very good app with some nice interface

It is trustable but you have to follow the guidelines, don’t pay with any outside app, it is a scam. On computers I wish you could see if you messaged someone before like on phone but it’s a good app
By monkeyboy0725

I would like to see OfferUp delete items over 1-2 months old . Let people repost but have a time limit . Thx
By ghfthhgy

Can u give us back Let Go! Ever since the switch to this offer up its constant fake accounts or scammers for everything i try and buy or sell.
By JoseMBaez4

Why do I have to send a stranger my phone number to verify that I’m real when I have a profile picture and they don’t. I dont think that should be allowed can be hackers out there just wanting ur phone number to get into your stuff . Why is that a thing ?
By H3ro23

I have had offer up for a while and post tons of my items over 200 + items. I like selling things but constantly get people asking for my phone number as there are many scammers and hackers and I report them as I should. However now they have deactivated my account for absolutely no reason without warning me and will not allow me to contact them to get it reactivated. I will never use this app again. It would take so much work to repost all my items under a new account. There loss not mine because they were making a lot of money off of me.
By Pam Weber

This has been so terrible. I haven’t been able to sell anything now that let go and offer up have merged together. This is ridiculous.
By Myrmidon queen