The digital edition of the The Economist weekly magazine with audio, Users on iOS 10.3 or above can explore an expanded version of this app, incorporating daily and weekly updates, along with a morning briefing by searching for ‘The Economist’. Readers can access their essential global briefing on current affairs, business, finance, economics, science, technology and the arts from The Economist each week. Download the free app to: • Enjoy three free articles a week, including the cover leader • Enjoy the content of the weekly newspaper in an easy-to-use format • Save articles to read offline later • Get alerts when the new issue is available along with notifications on cover stories, breaking news and analysis. • Subscribe within the app and get full access to The Economist apps • Share articles via e-mail, Twitter and Facebook • The app presents a great digital native reading experience for readers allowing for font size changes, Night Mode and other convenient user friendly qualities. In today’s changing world, the one thing that’s certain is uncertainty. Make sense of it all with The Economist. SUBSCRIBING IN-APP • Purchase a quarterly subscription to the full edition of The Economist for USD $45.99 or an annual subscription for USD $189.99. • Subscribe annually, quarterly or buy a single issue. You will be charged in your local currency at the prevailing exchange rate as defined by iTunes. • Payment is charged to your iTunes account upon confirmation of purchase. • Annual and quarterly subscriptions automatically renew. You can manage auto-renew of your subscription from your iTunes account settings at any time, but must be turned off at least 24 hours before the end of the current period to avoid being charged again. • The app may offer a free trial. At the end of the free trial period, the full price of the subscription will be charged thereafter. Cancellations must occur 24 hours before the end of the subscription period to avoid being charged. Visit http://support.apple.com/kb/ht4098 for more information. ALSO AVAILABLE ON IPAD Simply search for The Economist in the App Store to download the app for free. Please note that this app requires iOS 8.0 and above. We recommend you update to the latest version of iOS to receive the best possible experience. 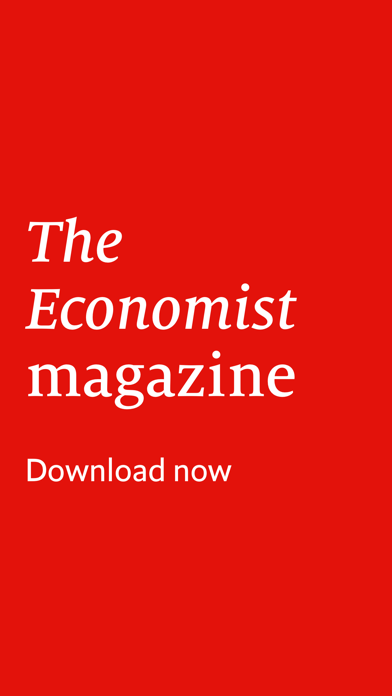 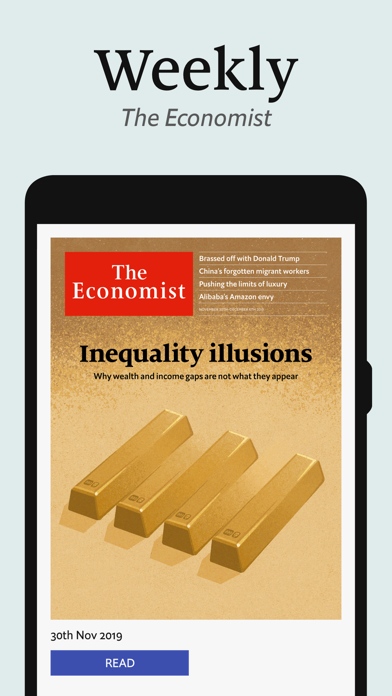 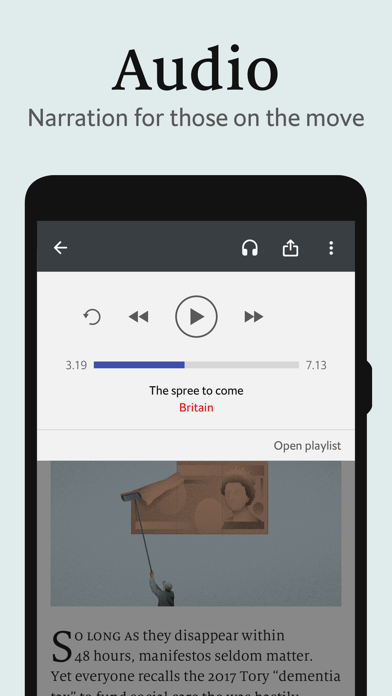 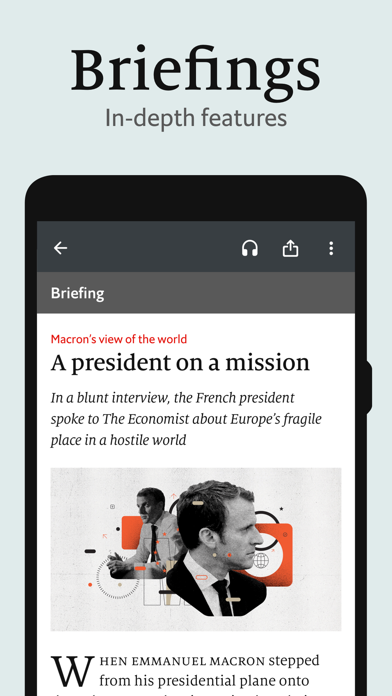 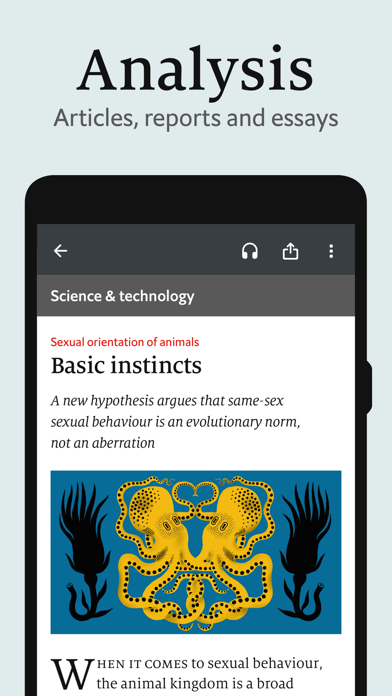 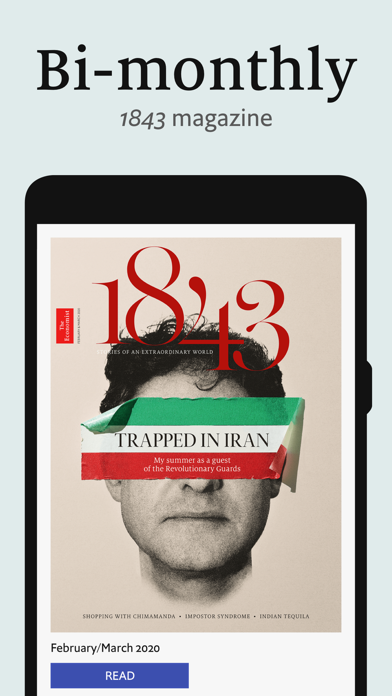 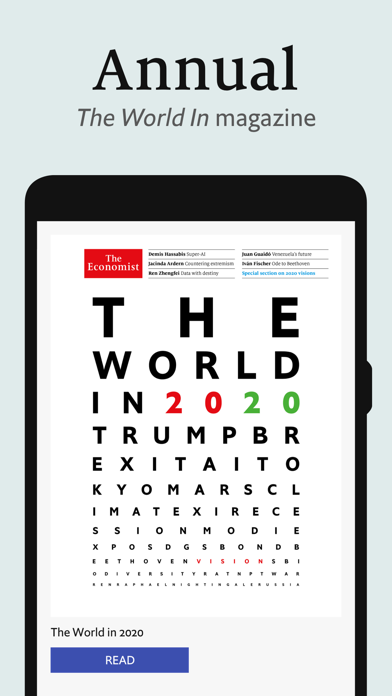 The Economist has great content but their apps and websites are poor. Subscription renewals fail on both mobile app and website, articles don’t display in app, delays in getting access after payment. Their technology does not live up to their reputation or quality of content. Do better.
By a nickmane that was not taken

Unlike previous versions, I can no longer skip tracks to the next article while on car play. Moving forward 15s is of little use.
By csng111

Terrible maintenance. Account information is forgotten, and trying to log in yields an error message that the connection timed out or system is down. Glitches with audio.
By alas thtkfifjd

The audio portion of this app has been incompatible with basic Bluetooth functionality for over a year, meaning, for example, every audio interrupt stops playback and forces a phone based restart. If the app were free that would be forgivable. However considering the subscription is $$$ per year, it is very disappointing.
By orb user

unacceptably unreliable given the cost

I’ve been an Economist subscriber for many years. It’s expensive. This app continually boots me out, issues (especially downloaded audio) disappear without warning after I’ve downloaded them, and now I can’t even log back into my subscription because the Economist is having ‘technical issues’, and their backup solution is to try to charge me $7.99 for the issue I’m already paying for with an annual subscription. Considering the cost of that subscription, are you kidding?
By mjblanchard

The audio function especially is virtually unusable now that it plays only 1 article at a time, and does not work with iOS controls. I am not even going to mention the lack of feature function that everyone is used to from other apps. Please just get the basics right so it’s usable. Every upgrade the app gets worse.
By Unhappy..........

The audio features have become less reliable and bugs more frequent over time. Since several versions ago, the tracklist/ playlist configuration options became non-functional (it would play the next article in the order no matter what tracks were selected or even downloaded). Then the audio was no longer developed to be handled by iOS as such, so Bluetooth controls stopped working. With the latest release, it will not even play more than one article at a time. It requires opening the app and manually playing the next one, which makes it useless when running or driving. I consume the Economist almost solely via audio edition when I commute or work out, and this decline is making it impossible to rely on it as my go-to news source, which is extremely disappointing because the journalism is great.
By Kenfoster1987

Seems everyone has had audio issues with this last major update, for weeks and almost months, yet it’s still not fixed; hey all, why aren’t you listening to us, do you just not care? Yes, this is comes across as a simple rant, but I, and clearly multiple others, have been patiently waiting for two months for this to get fixed and it still hasn’t, and others are having the same issue but no resolution is being provided, don’t you all test this stuff/care?
By Stephen_Smith

This is one of the best designed apps out there. I particularly like that it provides the option of selecting which stories you want to download in audio. The problem comes when you try to use third party listening devices like headphones with the app. The app is either non responsive to headphone commands or when you stop and then restart a story an ad will play on top of the story. A few times Apple’s music player came on instead of the app. This deficiency fundamentally impares my ability to use the app unless I have my phone on and in front of me, which is basically never.
By Usylesses

The Economist weekly US iPad