Looking for inspiration? Whether you’re designing a home or searching for travel ideas, good ideas start on Pinterest. Explore over 100 billion new ideas for every part of your life, from what haircut to get to what to make for dinner. Create extra storage space in your home, turn an old t-shirt into a stylish dress, or plan your next vacation with Pinterest. 3 Reasons to start finding and saving ideas on Pinterest: 1. Discover everyday inspiration and explore articles on trending and recommended topics. 2. Collaborate with friends for your next group trip, party or project. 3. See an idea out in the world that you like? Just snap a photo of it with Pinterest Lens to find how to buy, make, or do it! Discover new possibilities and save what you find. Find inspirational ideas from anywhere on the internet. Get ideas for the topics you care about most: - Travel and fitness tips - Fashion and style - Home design and architecture - Food and cooking - Wedding inspiration To start saving and sharing Pins, download now. 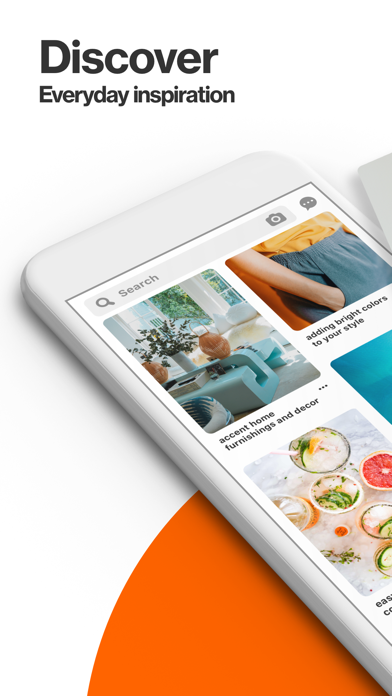 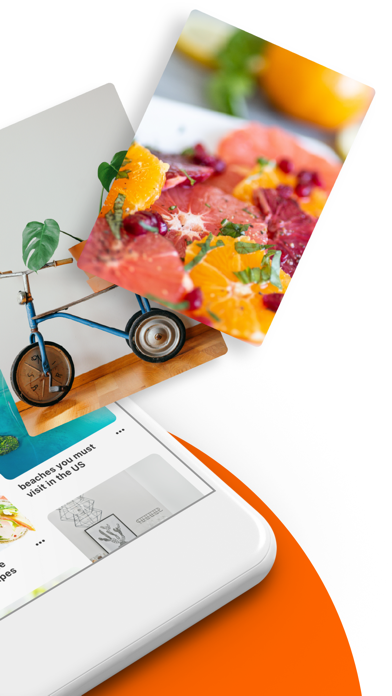 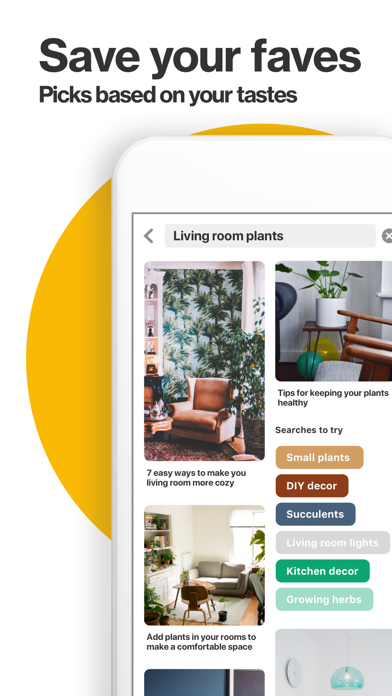 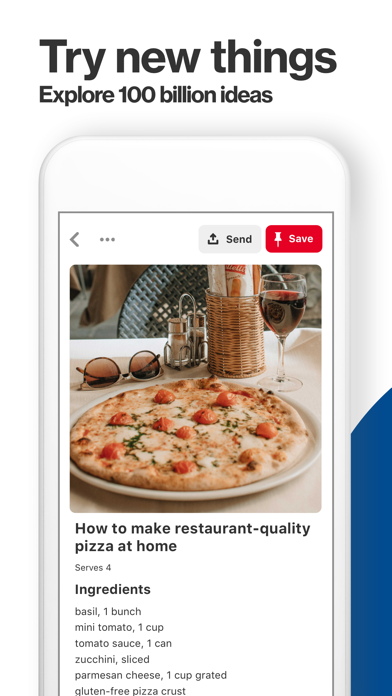 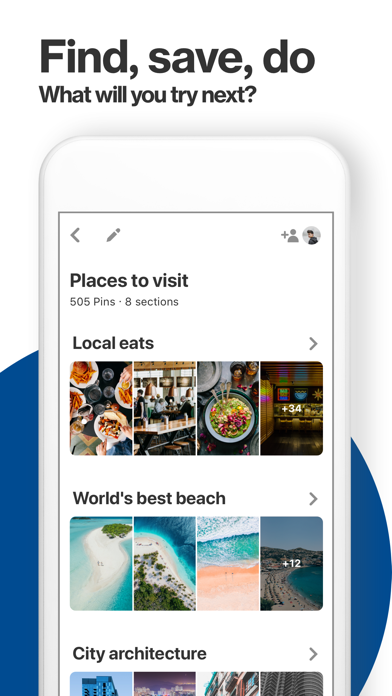 Love the app but..

I love Pinterest, it’s super helpful towards ideas! But recently it only shows pins from 2 months ago, not recent ones that I pinned, well... recently! It’s pretty frustrating!
By BirdQueen11

Instead of your weekly “touch ups” how about you fix all the stuff that’s broken?? No one can see any replies or comments. Comments are turning off on story pins without being able to turn them back on. Analytics are screwed up on pins. I just ask, instead of adding new things every week, fix the important stuff first? With every new update, something breaks
By otomelon774

I’ve been with Pinterest since it was invite only. I’ve noticed subtle changes through the years and have been able to overlook them. But, now, it infuriates me with the amount of ads. I can’t look at a recipe without the stupid video ads playing. As soon and you X out of one, another one pops up. It also seems as if it’s the same recipes over and over again. I miss seeing what “regular” people are doing. Everything seems to be the big corporate companies posting. Very disappointed.
By Momof2c's

the app is pretty amazing. it’s just not as cool as everyone says it is in my opinion, but that doesn’t make it bad. also the image search doesn’t work, but that might just be me and my slow phone. i really only downloaded because the “anime minimalist posters” that i saw on tiktok, but it’s pretty fun to scroll and make pins.
By hangezoeshusband

All of my saved extra categories are gone. Why? Also, I can’t even delete items anymore. Why? Changing for the better is ok, but not worse!
By starr491

used to be my favorite app before the awful updates

i’ve been using pinterest for years, and i never had any issues. in the past fee months pinterest has been taking away many features that made the app better, such as being able to search for boards based on keywords. it seems like with every update they’re getting rid of another good feature or the sake of “pinterest’s new design”, trying to make the app pretty much unusable. also the fact that if you click the help option in the app, none of the links are clickable is also a pretty big problem in my personal opinion
By waltbrizney

Love it, just a few problems

I love pinterest a lot but there are a few things that should be fixed. My main problems are that a lot of the time now I can’t see my or someone else’s comments when I know that I didn’t delete my comment. Like I enjoy looking at different recipes and then reading tips that people add in the comments, but now I can’t read them anymore. Also, the following list is really weird. It says I have more followers than what actually shows on the list, or there are people who follow me yet they don’t show up at all. These are just a few things that if fixed, could make the app a lot better.
By padfoot_and_prongs

so I’ve read quite abit of your reviews of the app 1-5 star ⭐️ and I have to say this I was showed this site in 2012 and there’s been highs and lows 50,000 followers later until the business profile messed up and not it’s 21,000 first people are complaining about stuff that isn’t irrelevant to this app (1) -check your wifi with a Speedtest (2)-your devices have nothing to do with this app Not sure how this is the developers fault (3)-people don’t complain about what you think is right or wrong if you don’t want your account closed behave second I wanted to thank you for controlling the porn that use to be ridiculous though profiles are still following me and others with a lot of followers which is normal for low follower counts to want to follow you in hopes my followers will follow them or get traffic from them at the least one of the glitches however of blocking porn profiles is it messes our profile up I know you’re working on it and I’m trying to be patient on this disgusting matter specially for the kids I’m sure parents are abit worried Third commenting is out of control honesty I think this should be taken away it’s nothing but a free for all for unhappy people to go at others for nothing it’s disgusting the bullying I see this is not a social site this is a inspirational site ads please remove them I have Etsy and I have Amazon and google Please add back board search and show people’s name on a single pin I’m impressed by ideas from pins I’m good if they have 10,000 or less followers not ones that pay to push there opinions in my feed and the stories are a reason I don’t use fb/Twitter et cetra I literally will block these kids that load pins after pins of pictures they either steal from others or of themselves that are not motivating or inspirational ideas and videos from YouTube are getting harder to find because of these “stories” vids besides these issues thank you for working hard to make this a safe site 🎀 Mel mieske 🎀
By Greeeeeeeaaaaatttt

I cannot save pins to sections on my boards without going into the board and editing the pin. This is very annoying
By Rice🥢