It makes sure you'll NEVER miss a pill ever again. With myPill® you can truly be free of worries. You'll love it. - "I work crazy hours and myPill is very persistent at reminding me so I never forgot! Awesome!", Kayla F. - "I absolutely love this app. The reminder is loud and helpful.", Linda L. - "I use this app on my iPhone and it works great. I never forget to take my pill. The options to make notes and mark when my period starts and ends is so helpful! Great purchase!", Megan N. + DAILY REMINDER. myPill® knows when to remind and when you're on a break. + SNOOZE. If you want, it will keep reminding until you've taken your pill. + PLANNER. Reminds you to buy new packs, call the doctor, schedule yearly checkups, stores your prescription, or anything. + PILLS, RING, PATCH. Supports all known contraceptives. + HISTORY. Take notes, track symptoms. Your doctor will love you. + PREDICTION. Plan your vacation according to your period, makes it easy avoid unpleasant surprises. + WATER REMINDER. Keeps you healthy and productive, use myPill to track your daily water drinking. We'll keep you hydrated. We're giving you the best features for free, because we want you to find myPill® useful even if you don't want to pay for an upgrade. But knowing how important it is to take your pill daily, consistently, at the same time and on a regular basis, it is highly recommended to upgrade and enjoy all the great benefits myPill® has to offer. myPill® was built with one purpose in mind -- giving you the BEST tools, that would match your personal needs and would make your life better by allowing you to confidently know that as long as you have myPill, you won't ever forget a pill. Here are the great features we're giving you for free: + Daily reminder for taking a pill, no internet connection required. + Automatically pauses reminder on break days, during your period. + Hi-Res great looking graphics, adjusted for retina display and iPhone 5 big screen. + Tracking of period flow, period symptoms, taken self notes and more. + Planner for scheduling yearly check-ups, tracking pill packs and more. + Monthly calendar that visually shows events and days with a pill. + Six months ahead prediction of pill packs. + You can postpone your period by adding more pills to the pack, following your doctor's instructions. Benefits you'll be getting if you decide to upgrade: * Snooze - several reminders per day, they'll stop when you've taken your pill. * Custom number of pills in the pack - 21/7, 24/4, 28/0, 84/7, or any other. * Secret reminder message, allows discretion from other people when getting notified. * Password protection, protects your info from other people playing around with your phone. * Reminders of placebo (non active) pills. * Daily reminders to drink glasses of water - hydration is important for your body! * Logging of pill taking time myPill offers one month or six months premium membership subscription plans, "Geetok Community Membership", for $2.99 and $14.99 accordingly. Subscription automatically renews unless auto-renew is turned off at least 24-hours before the end of the current period, subscriptions may be managed by the user and auto-renewal may be turned off by going to the user's Account Settings after purchase. Payment will be charged to iTunes Account at confirmation of purchase. Terms and Privacy: http://www.mypillapp.com/terms/ 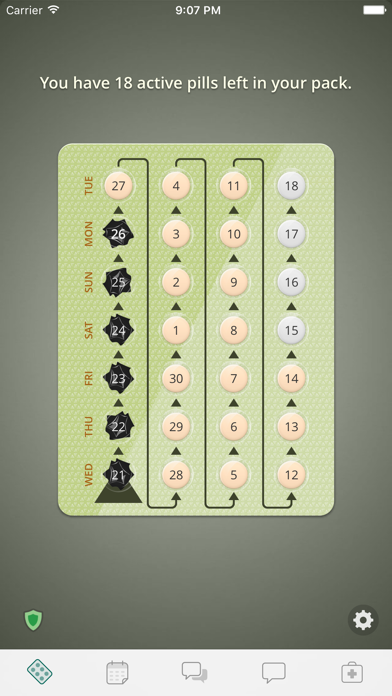 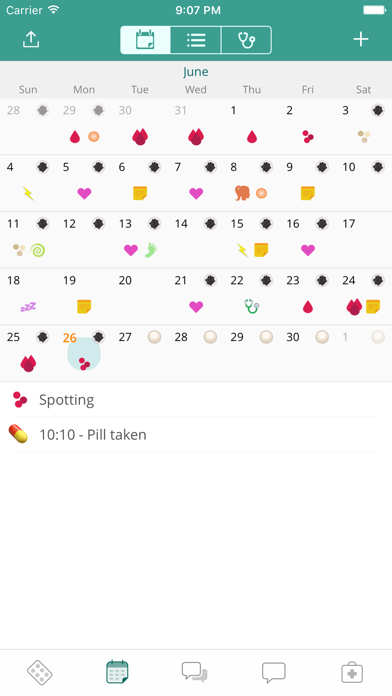 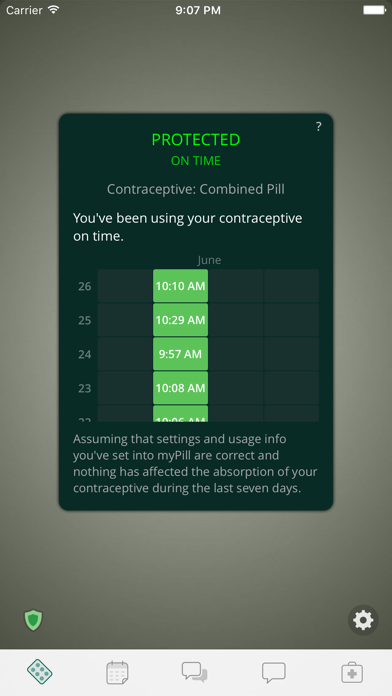 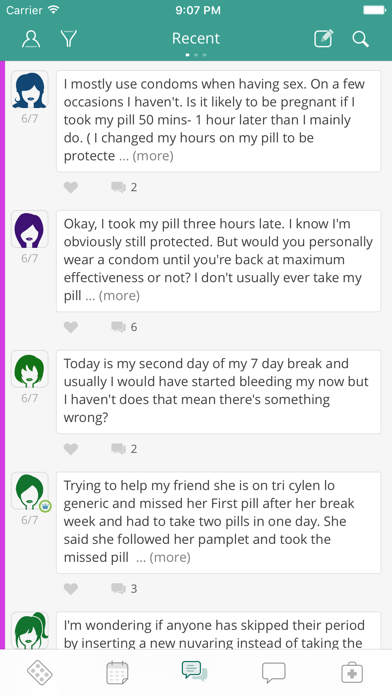 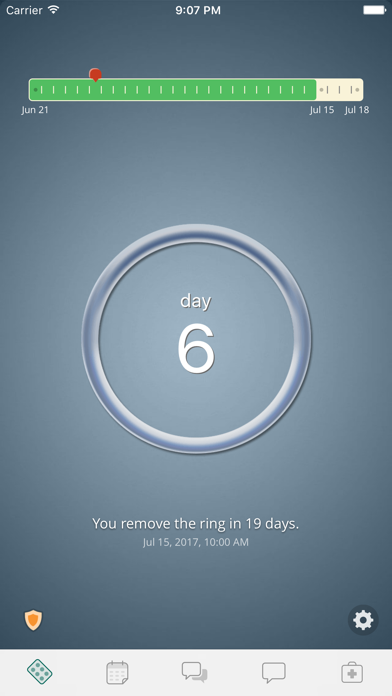 There are some features that are alright, and other features that I feel are a complete joke and set up terribly. If you are looking for a calendar/symptom tracker/reminder app, it does the job just fine. I do like the symptom tracker and notes. It does include a lot of birth control forms too, so that’s nice. On the other hand, the forum between users is a mess. At first I thought the feature was nice, where people can ask unfiltered questions if they aren’t comfortable or able to get in contact with the doctor. Sounds like a great idea too. However, very quickly do I see users say “do your research” and “stop posting questions that people have asked before,” etc. What seems most troubling is that no one appears to be certified, unless they are certified with “clout” because they interact with the comments for YEARS. I have a problem of people writing as if they are professionals. Just because you have researched the pill, or have taken it, does not mean you understand how other people’s bodies respond. My other note is that there can be little compassion towards people who are at different levels of understanding. Yes, I can read the papers on the pill, and look up stuff online, but some people have trouble processing and applying that information. On top of that, pregnancy scares are no joke, and sometimes you need support and help processing. Too many times I’ve read “stop asking questions other people have already asked,” or “just take the information you were given and stop asking” feels very compassionless to the situation. So if you want to post questions, my caution is that some of these women can come off very compassionless because they keep answering similar questions (on their own will too, no one said they had to respond to everyone). I can understand user frustration on both ends, but at the end of the day I think some people really need support through an insecure/uncertain time. By all means, this is a simple tracker, and does the job. It’s not an app I am enthusiastic about, but it’s hard to be excited over a pill calendar. It’s a 10/10 ranking for the tracking part. If you are looking forward to the forum, understand that it’s highly flawed, and extremely questionable on how helpful it can be. 3/10 ranking for the user interaction.
By NoOtherNicknamesFree

Bought this app 2 years ago. , immediately paid for premium because the features are great and the premium is for life you can’t beat that. Turned off the forum tab because that doesn’t apply to me, but the app serves its purpose. I haven’t missed a pill since I’ve had this app, it even helps me track glasses of water. I can save doctors appt, add notes, and symptoms, it doesn’t get any better than that.
By nenanacolee

I love this app and thanks to this app I can keep track of my birth control everyday. Been using this app since January 2019 and it has been the best thing in my life ever since. Super reliable!
By Mstrippy

I wish I could lock the app, so my data can be protected. This is not possible without a premium subscription, which none of the other features I do not need or want.
By TOPW_QOH

Major subscription issues for over a year now

I really loved this app when I first started using it. I even signed up for the monthly subscription cause it was super cheap and why not!! However about a year later I started experiencing issues with the app. I would go on the app and it would tell me to purchase the premium membership almost every time. Then other times it would work as normal, considering the fact I literally had a monthly subscription that would automatically be automatically renewed every month… I kept experiencing the same issue over and over except this time recently the app would not go back to normal and I was continually being told to purchase a premium membership. Come to find out the reason being was they raised their prices and the price that was being renewed automatically in my Apple subscriptions were less than what was supposed to be paid. After realizing this I renewed my subscription and paid $15 total for a forever membership almost a week ago. After doing this I thought everything would be fine but boy was I wrong. Went back on the app today and once again it’s telling me my subscription is expired and I need to renew AFTER JUST PAYING $15 FOR THE FOREVER MEMBERSHIP!! This is beyond me and pretty annoying to say the least. I contacted support about this so let’s see how that goes at this point because to be honest I’m on the verge of just getting my money back and using a different app🤷🏼‍♀️
By theres no nickname available😐

I’ve used this app for about 6 years and it’s the best one for period tracking and pill reminders. I’ve tried others because I liked the feature that it would give me other more in depth insights into my period and cycle, but this by far always had the best pill tracking so I could 100% sure I didn’t miss one. I hope it’s keeps updating!
By aro_w

This was my last time trying this app. The reminder will go off and I’ll mark a pill as “taken” then 5 min later the alarm goes off AGAIN and I open the app and it shows the pill was taken but the reminder will keep going off… why? Then the next day I’ll go in and it’ll show I missed 1-3 days of pills. I didn’t… Every pill has been taken and logged on time. I’ve downloaded and used this app multiple times over the years, I’ve updated it, I’ve deleted and reinstalled the app and it’s a consistent issue. When I eventually do miss a pill I can’t rely on the app to track it to use back up methods because this app sure isn’t reliable. I’m better off setting an alarm on my phone and using google calendar to document I missed a pill than this app. This has been a 2+ year issue.
By AEGP

Stay away! Install at your own risk! I really liked this app for like 2 days until I opened up my email to see I somehow purchased a “Premium Membership” upgrade. I never even KNEW there was a premium membership until I was charged for it. There was NO checkout screen, password/fingerprint purchase confirmation, NOTHING indicating somehow I was about to buy an upgrade. After being charged, I went into the app description and the details state the membership is OPTIONAL. Nothing about a free trial, and certainly nothing informing me about being forced to buy a membership. Apps in the App Store tend to get away with a lot of crap, but this is downright thievery. And according to some other previous user reviews, I’m not the only one who’s had this issue either. Stay away from this app! Find another one of the many birth control calendar apps out there.
By boopbop

Just got it and it’s not working

I just got it and I get the subscription and you can make a password so I made one but now when I open the app it ask for a password i type it in but it still doesn’t open . So now k can’t even access the app
By victoria.rom

Warning to all conservatives, if you have a differing opinion you will be called a slew of names and shut out , DO NOT GET THIS APP
By Bekah_kah