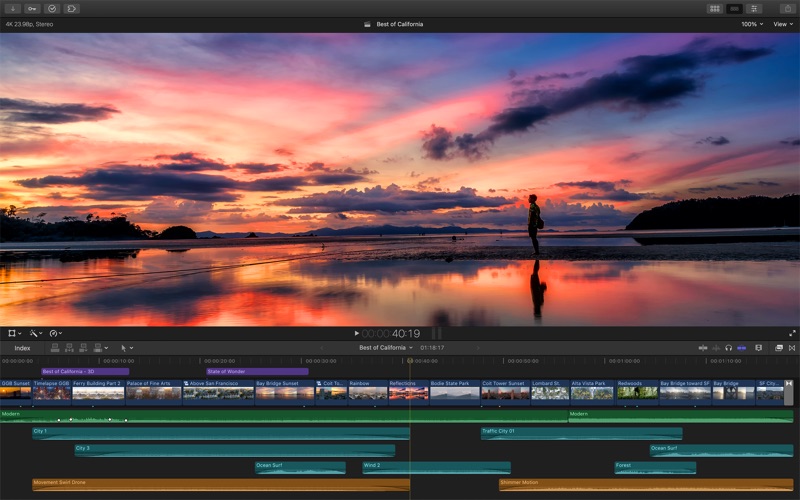 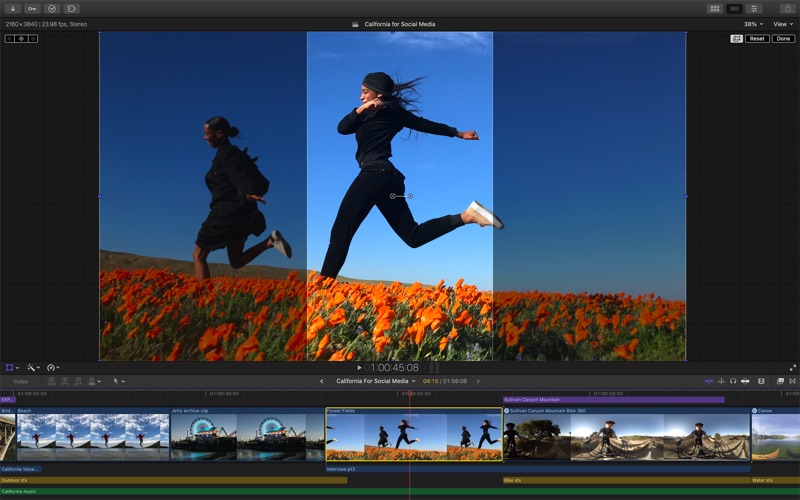 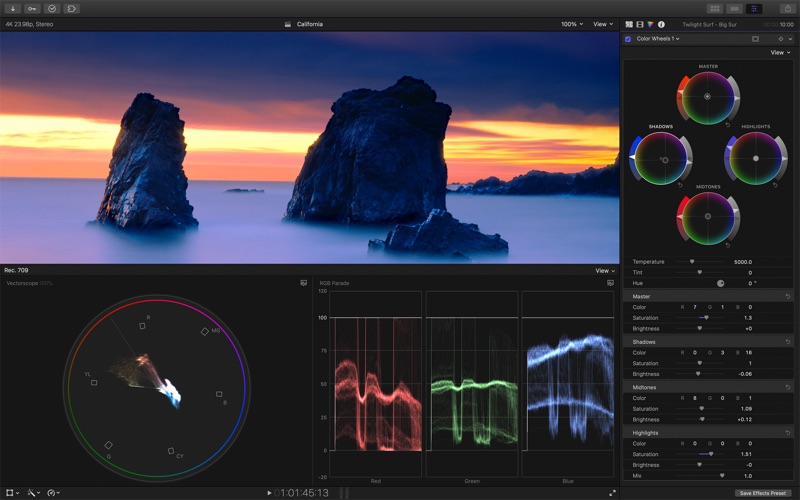 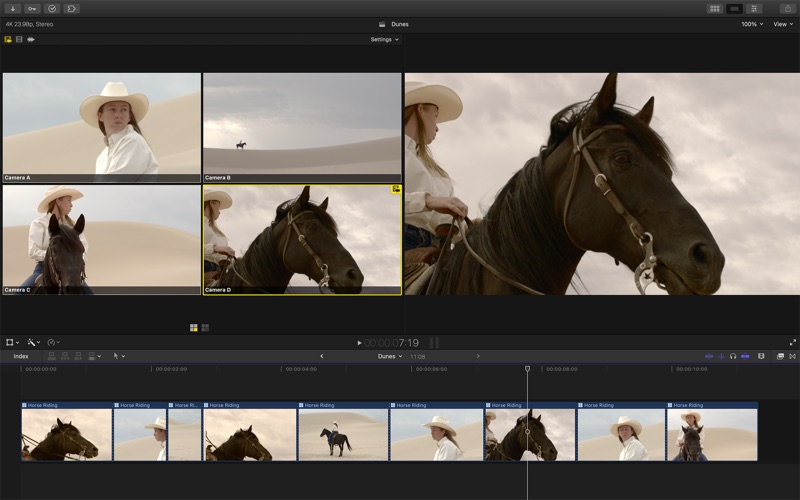 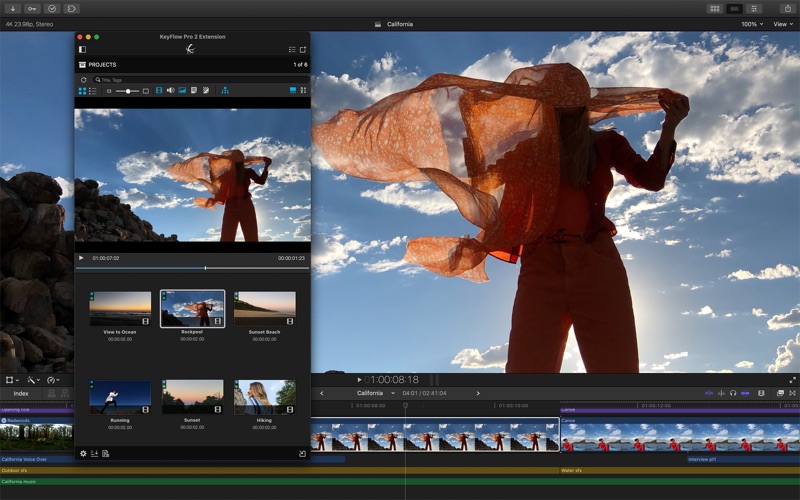 I can't imagine my MBP without Final Cut pPo and Logic. They are the best ever
By MohamadKarbi

Baffling how Apple can sell this blazing pile of garbage that's 20 times slower than Premier Pro 2021 for trimming and transcoding 4K video captured from Apple's own iPhone Pro Max 11. A transcoding task that takes PP21 30-45 minutes can run for HOURS on this garbage software.
By mark98201

I use Final Cut Pro on a daily basis, but since the last update (10.5.2), it became almost unusable: slow, unresponsive and it slows down every other program I use to a crawl on my Mac. Apple, what gives?
By Ryuku San

ProRes 422 HQ.mov is the Language of TV networks.

I edit and deliver TV spots with FCPX all day, almost every day. It handles the day-to-day pro-level operations like it's the best out there. One of the major benefits is having both hardware and software made by the same developers. I have used both FCPX and the major competition from Adobe, and Final Cut is without a doubt much easier to use. Don't be fooled by that ease... it just means it was well developed. Nothing prosumer here, just pro. If you work in TV, the networks want ProRes 422HQ wrapped in an .mov container. Well, FCPX is the home base for that format, so why work elsewhere?
By Hillman's

King of Speed and Far more Powerful than you Think

Like many I jumped ship for Premiere when X came out, however, after jumping back since the 10.2 release I have been nothing but pleased, for 5 main reasons. 1. It is incredibly stable, and with autosave I have never lost any work in the years I've used it. 2. Once you understand how the magnetic timeline works, it is incredibly fast and flexible; it gets out of your way, allowing you to work at the speed of thought. Also the timeline index allows you to make batch changes to your timeline incredibly quickly. A number of other features like Snapshots take a lot of work out of version management. 3. The ecosystem of plug-ins is impressive. Just about anything you can think of is available for FCP as a third party plug-in. 4. The file browser. Once again, different paradigm, but once you get the hang of it, there's really no going back to normal. It's like having a MAM integrated into your NLE. 5. SPEED, out of all the NLEs, nothing beats FCP (integrated with Apple hardware) when it comes to speed. It rarely ever chokes, and I've thrown a lot at it, and it exports super quickly. FCP is a killer app. I've been using it professionally for about 8 years at this point, and it's never let me down. I can easily work 2 to 3x as fast (not joking) and the amount of time it has saved me over the years has been invaluable. Also check out Motion, it's no slouch for motion graphics or visual effects work either.
By Lorenzo876

I started cinematography with no experience or knowledge of it in 2017 at age 11 with VEGAS Movie Studio 12. When I have switched from PC to Mac, I've switched to Final Cut Pro X and my projects have had a noticable change for the better. The stability/speed is truly astonishing. The features are easy to use and powerful. I have yet to find a file it can't read (mp4, vob, mov, mts, mp3, caf, m4a, wav, jpg, jpeg, png, aiff, and more work so far). Replacing tracks with metadata was genius. The library is basically a .zip file in my Movies folder that can hold all my media without it being in any other place. I then back up the .zip file with Time Machine. While I feel like there could be a few more Video effects added, I can't complain because there are already so many (along with a library of stock sound effects and music). Overall, if you're going to really use it, it is worth the $$$!
By zacisbac06

I am a pro editor and have been using Final Cut and Adobe my whole editing career. Final Cut used to be awesome...now even with my decked out M1 Chipped Mac it droppes frames on SINGLE 4k clips in performance mode playback. I am VERY unhappy and will be ditching final cut for good if this isnt resolved VERY quickly.
By Ydghtsfgghhvfdsdsd

I really love when it freezes when I do the simplest of things. I swear I would rather use Window's movie maker instead of this supper buggy and trash application.
By fcd12

It's great but on mac it lags

Final cut pro is a great editing too and its very similar to premiere pro. However on the Mac after a while the video play back starts to lag and and rendering or adjustments you make starts to take long to process. I looked this issue up and found out if there are too many applications open it may cause it to lag. As a result i closed all the other apps i had open and it still lagged, come to find out its some issue between mac and the software. Its some kind of glitch that apple would have to fix. Hopefully they do soon because i really like using the software especially as a beginner its easy when you really get the hang of it.
By Lefredss

Reninstalled after tons of crashes fixed it.

I'm new to the program and left everything default. Loaded in a video file and i hit play and the application crashes. Idk what else to do if it has issues doing something as simple as that. Had to reinstall the program. Deleted it and redownloaded it and my issue was resolved.
By Rob280