From Bruno Mars to Mozart, play the hottest songs! Relax your soul with beautiful sounds of piano while playing your favorite tunes on original #1 piano rhythm game. Featured by TIME, New York Times and Apple's Best New Apps. Features - New hits added daily - 1000+ hits across genres - Rhythm and tempo control - recreate the music! - Pair with real vocalists on Smule Jams mode - Instrument options: classic, harpsichord, Funky 80's synth, organ and more Current most popular songs (all genres): ------- POP ------- ** All of Me - John Legend ** On Top of the World - Imagine Dragons ** Safe and Sound - Capital Cities ** Counting Stars - One Republic ** Blurred Lines - Robin Thicke, ft. T.I. & Pharrell Williams ** Wake Me Up - Avicii ft. Aloe Blacc ** Treasure - Bruno Mars ** Cups - Anna Kendrick ** Stay - Rihanna ft. Mikky Ekko ** Bubbly - Colbie Caillat ** What Makes You Beautiful - One Direction ** Moves Like Jagger - Maroon 5 ------ ROCK ------ ** Eye of the Tiger - Survivor ** Rock You Like a Hurricane - Scorpions ** More Than Words - Extreme ** The Final Countdown - Europe ** Bring Me to Life - Evanescence ----- CLASSICAL---- ** The Magic Flute - Mozart ** Moonlight Sonata - Beethoven ----- MOVIES AND MUSICALS -- ** Phantom of the Opera ** Jurassic Park Theme ----- COUNTRY ----- ** Friends in Low Places - Garth Brooks ** Before He Cheats - Carrie Underwood ------ R&B ------ ** I Believe I Can Fly - R. Kelly ** Hero - Mariah Carey ** Respect - Aretha Franklin  Want a song that's not available? Suggest songs on Smule’s Facebook page: www.facebook.com/smule PICK UP AND PLAY EFFORTLESSLY Magic Piano makes you sound like a piano prodigy - any time, anywhere. Play your favorite songs with your own spin and sound great every time. -Follow beams of light to guide your fingertips to the correct note. You control the notes, rhythm and tempo, allowing your creativity and expressivity to shine. -Try out different instruments - change your piano into a harpsichord, Funky 80's synth, organ and more! PLAY WITH VOCALISTS FROM SMULE In the new Smule Jams mode, you can play the piano alongside real vocalists from the Smule community! CONNECTING THE WORLD THROUGH MUSIC™ - SHARE YOUR PERFORMANCES -Broadcast your performances on the in-app Smule Globe or listen to other players’ songs and give their performances some love. -Share your pieces through Facebook, Twitter and email. UNLIMITED PREMIUM SUBSCRIPTION - You can subscribe for unlimited access to our full song and instrument catalog - The subscriptions are $7.99 weekly, $19.99 monthly and $99.99/annually* - You'll be able to play all available songs on any instrument for the duration of your subscription - Payment will be charged to iTunes Account at confirmation of purchase - Subscription automatically renews unless auto-renew is turned off at least 24-hours before the end of the current period - Account will be charged for renewal within 24-hours prior to the end of the current period at the cost of the chosen package - Subscriptions may be managed by the user and auto-renewal may be turned off by going to the user's Account Settings after purchase - No cancellation of the current subscription is allowed during active subscription period *Price are equal to the value that "Apple's App Store Matrix" determines is the equivalent of the subscription price in $USD. https://www.smule.com/termsofservice 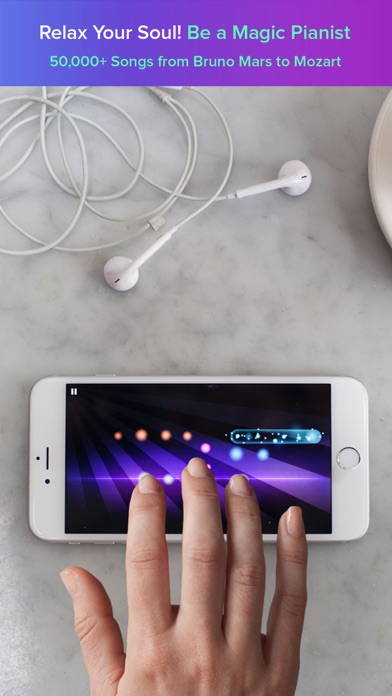 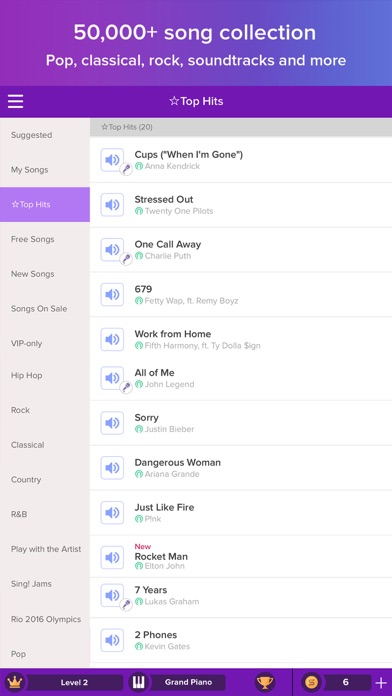 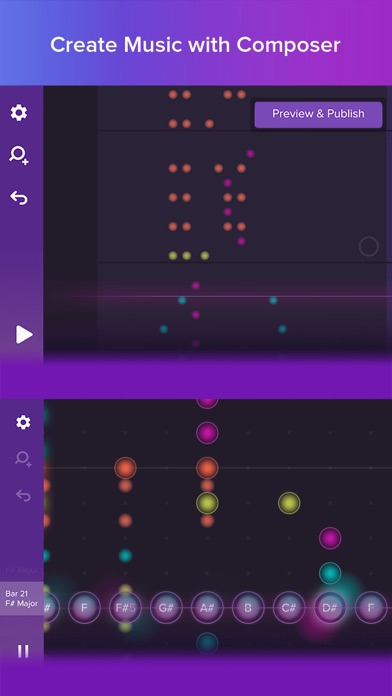 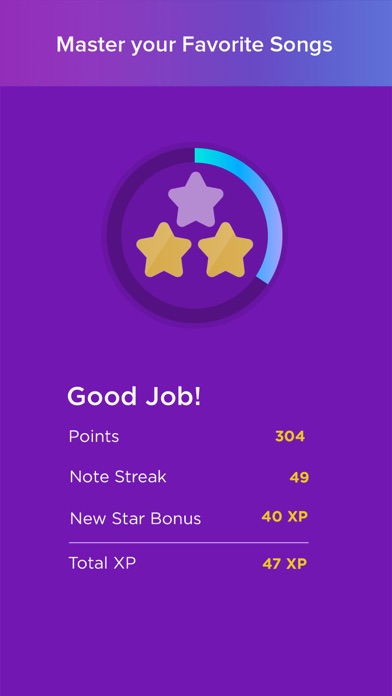 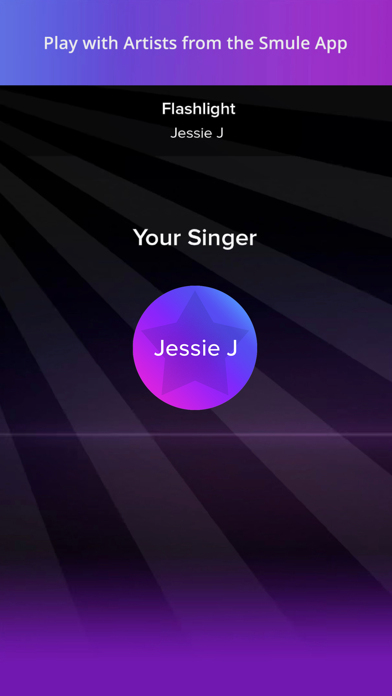 I cant play my own songs

Ive had this app for a while; its great, i really like all the instruments, and the overall look of things. But when I downloaded it again, i got all my songs that i composed, but i cant play them. I have to pay to play my OWN songs, which I believe is somewhat screwed up. Is there any way to fix this issue? Thanks in advance
By Some0ne who likes mu5ic

Make it how it used to be

I’ve had this app for a while, and it’s really good!! But there’s a flaw in it that is VERY annoying and aggravating. I signed in on my phone instead of iPad, and because I was on a low lvl on my phone, I lost all my songs when I logged in on my iPad. I want to log out, so I can create a new account, but when I looked up how to, it says you have to DELETE the app. I am very disappointed because that will mean I will loose all my songs and levels. If this wasn’t an issue I am 100% sure that I would have put 5 stars.
By snickerstheguineapig

Offers free all access trial, doesn’t even work smh. Waste of my time. Also deleted my old account with all my hard earned songs that I had to watch hours of ads for. Thanks for wasting my time, smule. I would give it 0 stars, but I can’t so you get 1 by default only. Thanks again for absolutely nothing, you crappy rhythm game that was made by people with receding hairlines and fat mothers.
By 648362729274629

This game used to be so much fun now it is just filled with ads. Very annoying.
By sarahjean01

i used all of my coins to buy a song and then got a notification that the song was removed after the app took my coins. i used to love this app but this was really annoying
By 맥디루

I’ve recently begun playing piano and was using the composer feature to transcribe a song I’m working on. I spent a few hours on it, but when I click “preview and publish” it gives me an error. I’d love if anyone had tips on how to fix this!!
By Melian♡︎

Far too many ads for an app that would otherwise be enjoyable. Years ago I would play the game for hours, but now I get tired of it after a couple of songs.
By ronniemj

I have used this app for years and I love how creative I am able to be. However, the composer feature has been broken for weeks, if not months now. I cannot publish a song without getting a message that says “Uh oh” and “try again”. I worked hard on a song I want published, but it has been sitting as a draft for a while.
By JDPumpkinPie

on both my accounts, every time i try to update a song it says “uh oh plz try again later” and it needs to be fixed. is your composer down or something? if it is plzzz fix it so i can make and update more songs. when that started i was like “whats wrong with the wifi?” and i turned off that device and then turned it back on and it still said “uh oh plz try again” a bunch of times and i was so sad and then i was like “is the composer down? you better plz fix it” so yeah if ur composer is down, will you fix it plz and ty? tysm.
By maddiecatoreoforever64