Pocket Casts is the world's most powerful podcast platform, an app by listeners, for listeners.Our podcast player provides next-level listening, search and discovery tools. Find your next obsession with our hand curated podcast recommendations for easy discovery, and seamlessly enjoy your favorite shows without the hassle of subscribing. Here's what the press has to say: Wired: "Pocket Casts Is the Podcast App Every iPhone User Needs" iMore: "Pocket Casts is the best podcast app for iPhone" With a unique set of simple yet powerful features and a limitless podcast database, you're sure to find something you love. WE SWEAT THE DETAILS Design: Easily listen to, manage and find new podcasts. Themes: Whether you're a dark or light theme person we've got you covered. We even have you OLED lovers covered with our Extra Dark theme. Universal: Custom but familiar iPad interface, supporting Slide Over, Split View and Picture in Picture. Everywhere: CarPlay, AirPlay, Chromecast and Sonos. Listen to your podcasts in more places than ever before. POWERFUL PLAYBACK Up next: Automatically build a playback queue from your favorite shows. Sign in and have that Up Next queue sync to all your devices. Trim silence: Cut silences from episodes so you finish them faster, saving hours. Variable speed: Change the play speed from anywhere between 0.5 to 3x. Volume boost: Increase the volume of voices, while decreasing background noise. Stream: Play episodes on the fly. Chapters: Jump between chapters easily, and enjoy embedded artwork that the author has added (we support MP3 and M4A chapter formats). Audio & video: Play all of your favorite episodes, toggle video to audio. Skip playback: Skip episode intros, jump through episodes with custom skip intervals. Apple Watch: Control playback from our Apple Watch app, adjust the volume or change playback effects, all without ever touching your phone. Sleep timer: We'll pause your episode so you can rest your weary head. Airplay & Chromecast: Send episodes straight to your TV or speakers with a single tap. Sonos: Browse and play your podcast collection directly from the Sonos app. CarPlay: When you're in the car, so are we. SMART TOOLS Sync: Subscriptions, Up Next, listening history, playback and filters are all securely stored in the cloud. You can pick up where you left off on another device and even the web. Refresh: Let our servers check for new episodes, so you can get on with your day. Notifications: We'll let you know when new episodes arrive, if you like. Auto download: Automatically download episodes for offline playback. Filters: Custom filters will organize your episodes. Storage: All the tools you need to keep your podcasts tamed. ALL YOUR FAVORITES Discover: Subscribe to any podcast in iTunes and more. Browse by charts, networks and categories. Share: Spread the word with podcast and episode sharing. OPML: Jump on board without any hassle with OPML import. Export your collection at any time. There are many more powerful, straight-forward features that make Pocket Casts the perfect podcasting app for you. So what are you waiting for? Visit pocketcasts.com for more info about the web and other platforms supported by Pocket Casts. 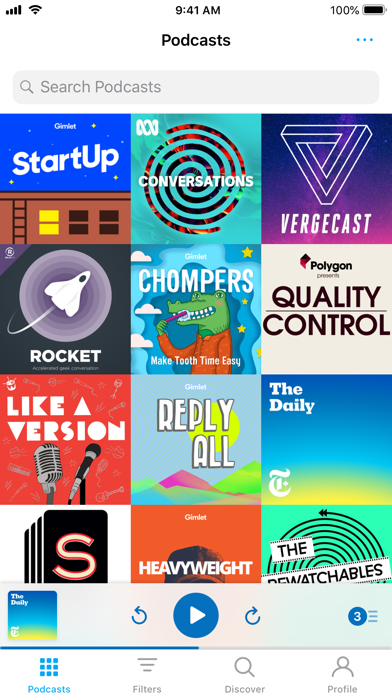 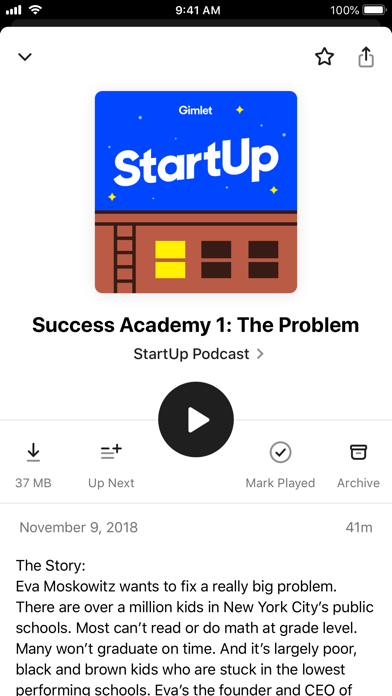 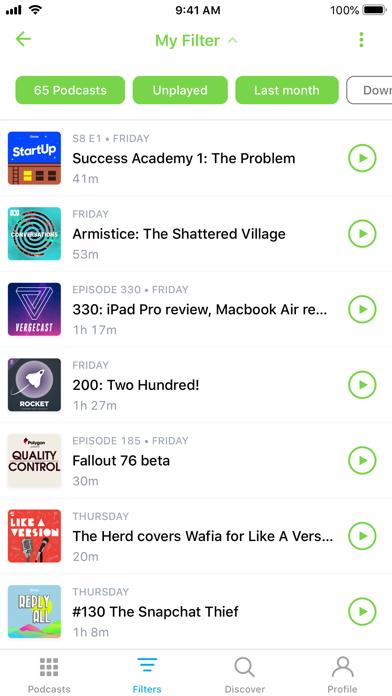 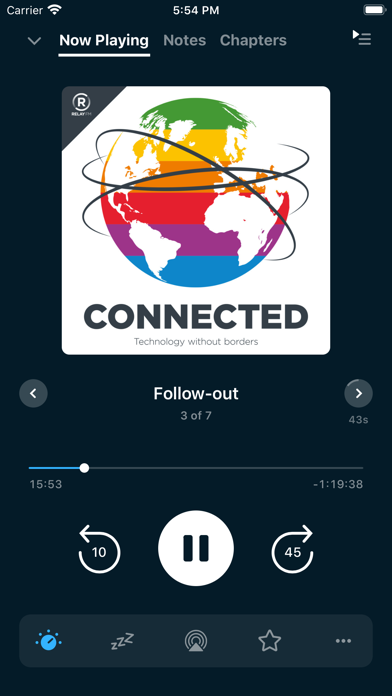 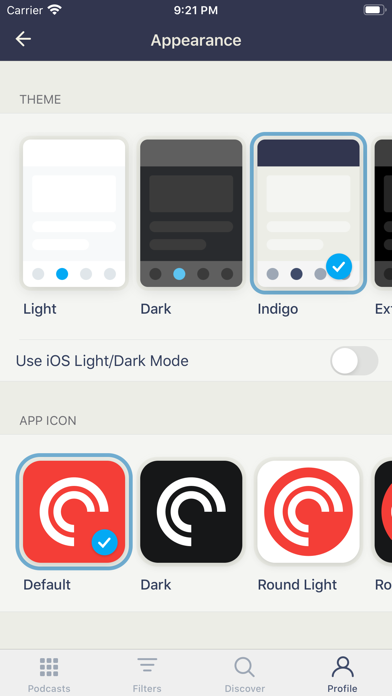 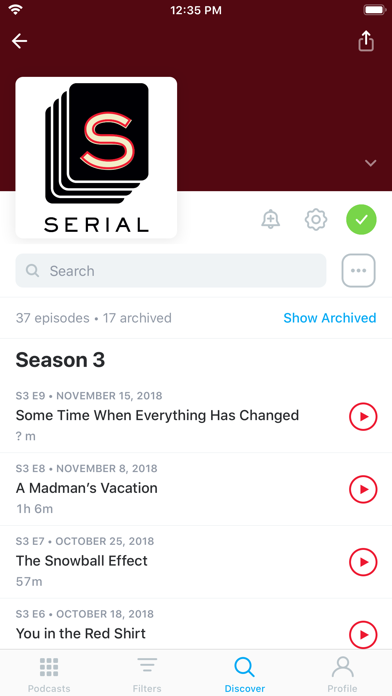 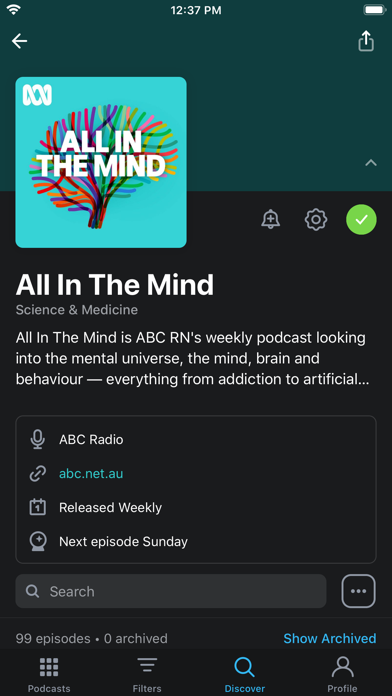 pretty much the best app but, like other apps , rankings and featured pods are clearly skewed with an obvious bias. would be nice if we just got a genuine presentation of what the people like. edit. just found out npr bought this, so that explains it! what a bummer. time to find a new app :( ….
By jk1212

Some podcasts will stream and some won’t. Can’t get it working
By Electricturd

I am an avid podcast listener. I listen to short news pods, medium length true crime pods, and long form comedy and interview pods. Pocket Casts allows you to FIND the latest podcasts, SORT them for quick access, and ORGANIZE a larger library if you become a podcast lover. Pocket Casts allows you to LISTEN ACROSS all devices, so I can be listening on my smart phone, get in my car and listen, then get home and pick up right where I left off on my tablet and cast to my smart speakers. This replaces all default apps on smart phones and is the final Podcast app you will ever use.
By dnegrin

I’ve used this app for years, but it has some chronic technical issues that have me ready to move on. For starters, podcasts randomly jump around while playing. Pretty much a fail for a podcast app. Second, the speed randomly increases. Today it jumped from normal speed to 1.5x twice within a couple minutes.
By Bmcd70

Hey folks! I love the app and have for years. I’m noticing in the last few updates that it’s sucking up battery life like crazy, and also heating up the phone quite a bit I think. I’ve noticed some others having the same issue on the subreddit. Any ideas for fixes/updates? Thanks, otherwise it’s great!
By brooklynfall

WHY IS THIS SO HARD?

As of 7.26 they STILL don't have the option to exclude Started episodes in filters.
By Three5Nines

I won’t pay for it

I won’t pay because I can’t stand the release notes. Yes, the stupid, unfunny release notes. Instead of allowing us to change the order of episodes in the inbox, they keep doubling down on the stupid release notes. I don’t want to give money to weirdos like that. Castro and even the crappy Overcast are just as good.
By tom5304

I have been listening to podcasts for many years now … this is without a doubt the best player. UI is fantastic, giving lots of control. Trim Silence and Volume boost works great too … app is solid, no glitches/bugs … just solid.
By MtrCtyJoe

It was fun and great for kids
By SeahawkSamSD

I love the features and flexibility of this app and the ability to use it on iPhone and Mac and syncing (if a premium user) Only frustration is the way they handle private feeds, but it works well enough. Great app.
By FortBacon