LINES by TouringPlans will help you save time and money during your Walt Disney World trip. We created Lines to help you know where to go and what to do during your Disney vacation. No other app – even Disney’s official app – gives you as much unbiased information and time-tested data at your fingertips. LINES features include: · PARK RECOMMENDATIONS for the next 10 days. · CROWD CALENDAR, so you know how busy each park will be for the next 10 days. · Customized, step-by-step TOURING PLANS for each Disney park so you save time waiting in line for any attractions—or all attractions. · REAL-TIME UPDATES to show you what to ride now, what to wait to ride, and even what attractions are offline (with an estimated return time). · ACCURATE WAIT TIMES using predictive technology and crowd-sourced live data to let you know how long you really will wait in line, no matter what the posted time says. · LIGHTNING LANE suggestions, to help you make choices to save you time. · COMPLETE PARK SCHEDULES including operating hours, parades, shows, and more. · SEARCHABLE MENUS WITH PRICES to help you find a Mickey Bar in EPCOT or the best use of a snack credit in Magic Kingdom. An invaluable help for people with allergies, dietary restrictions, or those looking for a favorite food. · PLUS MUCH, MUCH MORE. Our Disney trip planning tools have been featured by USA Today, The New York Times, Parents Magazine, AAA, major news networks, and newspapers, magazines, television shows, and radio shows. Since 1986, we’ve helped more than 3 million families plan their Walt Disney World Vacations. Note: Some LINES features, such as full crowd calendar access and all attraction wait times require an in-app subscription purchase for access. Other LINES features, such as customized touring plans, menus, and Lines Chat are completely free. Your in-app subscription includes 365 days of access to TouringPlans.com, the internet’s most popular subscription-based site for Disney trip planning. LINES by TouringPlans is not affiliated with or sponsored by the Walt Disney corporation or Walt Disney World. 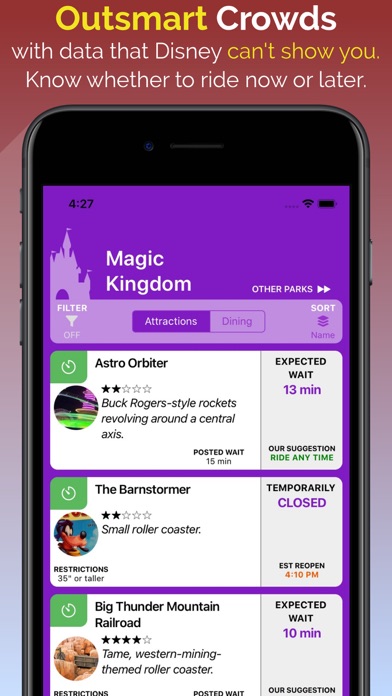 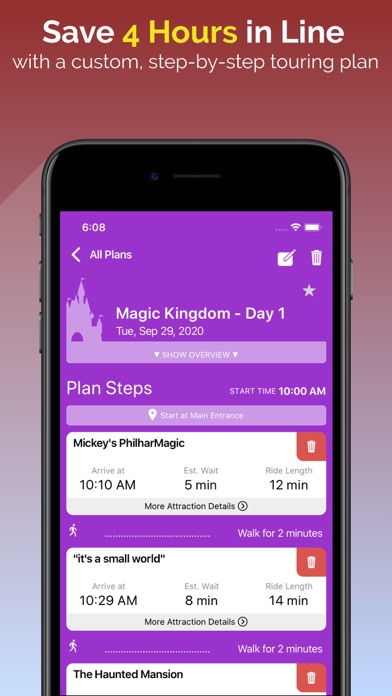 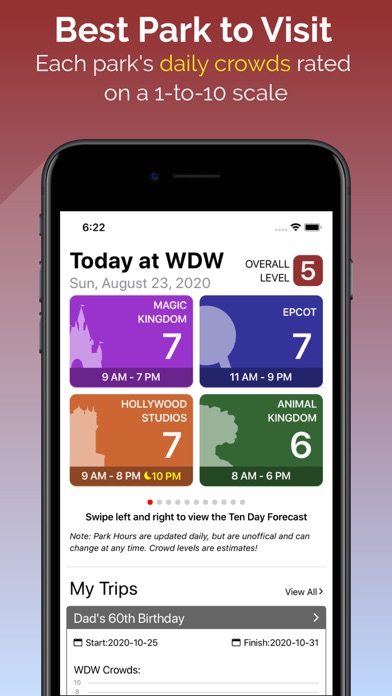 App crashed the first time I tried to log in. Seems to be unable to accommodate plans for special holiday events. The plans are there but the system will not allow for activities to be entered after main park closures even when you check the boxes to indicate your are attending a special event. To create plans you have to toggle between the website and the app. Really inefficient. Used in the past and it was great. Don’t have high hopes for the accuracy of plan timing now that I’ve read other reviews. Looks like I wasted my money.
By aaa579

I have used this app in the past and it worked well. This time it constantly froze, had inaccurate info, was of no help and a waste of money. Can’t give less than one star.
By Angry Fitbit Owner

Needs updating and a faster server

I recently went to WDW for the first time in almost 20 years for the 50th anniversary. I was determined to see and do everything and downloaded the app to help make that possible. I still saw and did nearly everything, but the app was not nearly as helpful as I hoped it would be. I did not subscribe to the service, so I only had access to the few free plans. I started by copying the ultimate plans. I had to delete all the shows that the app said weren’t offered at the time(and later found out some of them were offered at the time). I added our table service reservations, but was disappointed to find that nearly every time the plan would have us showing up late and would only give an option of getting there within a +/-10 minute window (which it often wouldn’t hit). Often it wouldn’t add the reservations to the plan at all and I would have to add things multiple times before they finally made it in the plan. I had similar problems entering Lightning Lane reservations. The reservations would show up at the top of the plan, but not in the plan itself and the ride’s part on the plan would tell me to go after my Lightning Lane time and wait in line. And if you want to see shows and parades, don’t use the app. Most of the parades weren’t listed in the app and the app would get you to shows way after they started. Then there was the Optimize button. It never stopped optimizing. I eventually started tapping optimize, waiting about 30 seconds or so, then tapping refresh and had some success getting the plan to update/optimize. My guess is the servers the app talks to need some upgrades to handle the volume. I went during one of the least crowded weeks of the year. I hate to think of using it during a weekend in the summer or during Christmas! I managed to successfully submit some wait times, but had a few get hung up in transit to the server and got a message from the app that the wait time was beyond the limit. It seems the shows, character meetings, and parades only get updated yearly. I went in April and holiday shows/parades were listed on the app. They also listed a meeting with Merida from Brave that my husband and I were excited about - Brave is one of my favorite movies, Merida is one of my favorite princesses, and she reminds my husband of me. When we didn’t see it on the My Disney Experience app, we asked about it and the cast member looked at me like I had three heads because Merida hadn’t been around for many months. There is a disclaimer on the ultimate plans that says the plan won’t optimize well. So when we went to Epcot for a full day after going for a half day and knocking out a few things, I made my own plan to give the app a fair shot without using the ultimate plan. Nope. I had the same problems with the optimizing and Lightning Lanes and scheduled reservations and such. On our last day, I don’t think I opened the app at all for our visit to Animal Kingdom. Instead we used the Disney MDE app’s wait times and figured it out as we went. I like the premise of the app and feel there is merit behind it, but the execution is lacking.
By RedhawkKat

No longer accurate but still charging you for false information.

I have used this site since 2007. There was a time when their info was invaluable. Since the pandemic, they have no clue what they are doing. The predicted numbers are always wrong and they don’t seem to care. They still charge for that info. It’s basically a scam now. Pretty sad fall.
By Jess1874

Not what it was

Post Covid, Disney has seen a tremendous boost in demand and crowds. I appreciate that this app can be helpful to pair with the Disney one. But the crowd sizes were flat out wrong, the expected wait times are simply being calculated against a formula. It’s not at all accurate. While in the park, minutes matter and this app really disappoints.
By Mitchulskus

If you try to use the free version by tapping Skip for Now on the first screen after login, the app crashes.
By Moonheids

Lots and lots of bugs on iPads

I’m trying to make a plan for a few hours now, but the bugs are KILLING ME All of the scroll wheels are 1 tick off. ALL,OF THEM The meal planning/scheduling screen has overlapping fields such that you cannot select the duration of your meal and therefore you cannot optimize. The biggest issue is that my set end time is STUCK on 6pm. I partly think this is the case because I’m scheduling on dates without published park hours but I feel the app should be able to work through that. Beyond that this app is great but it needs pictures and summaries of what each attraction is, what each restaurant is, and a small mini map, showing where each attraction is. Also, in the final steps I would love to see an interactive map showing my route that I can click on the stops, get info on the stop including a picture of 360 deg picture would be great Update: 2 years later, not a flipping thing has changed. The app is hot garbage. STEAMING PILE OF USELESSNESS
By 63516181984

Not accurate. Not helpful. Total disappointment.
By Nurse and Mama Angie

I downloaded the free app. I hit subscribe (which I thought was for emails). I never entered any card info or anything, but then I get an email saying I was charged $17.95! Not great business.
By jmortel0714

Lots of rides were saying 10-20m in the app but we’re 40-60 in reality. Gave up and trying to figure out how to get my money back.
By Jason Mark