Capture ideas when inspiration strikes. Bring your notes, to-dos, and schedule together to tame life’s distractions and accomplish more—at work, at home, and everywhere in between. Evernote syncs to all your devices, so you can stay productive on the go. Tackle your to-do list with Tasks, connect your Google Calendar to stay on top of your schedule, and see your most relevant information quickly with a customizable Home dashboard. --- “Use Evernote as the place you put everything… Don’t ask yourself which device it’s on—it’s in Evernote” – The New York Times “When it comes to taking all manner of notes and getting work done, Evernote is an indispensable tool.” – PC Mag --- CAPTURE IDEAS • Write, collect, and capture ideas as searchable notes, notebooks, and to-do lists. • Clip interesting articles and web pages to read or use later. • Add different types of content to your notes: text, docs, PDFs, sketches, photos, audio, web clippings, and more. • Use your camera to scan and organize paper documents, business cards, whiteboards, and handwritten notes. GET ORGANIZED • Manage your to-do list with Tasks—set due dates and reminders, so you never miss a deadline. • Connect Evernote and Google Calendar to bring your schedule and your notes together. • See your most relevant information instantly on the Home dashboard. • Create separate notebooks to organize receipts, bills, and invoices. • Find anything fast—Evernote's powerful search can even find text in images and handwritten notes. ACCESS ANYWHERE • Sync your notes and notebooks automatically across any computer, phone, or tablet. • Start work on one device and continue on another without missing a beat. EVERNOTE IN EVERYDAY LIFE • Keep a journal to keep your thoughts organized. • Go paperless by scanning receipts and important documents. EVERNOTE IN BUSINESS • Keep everyone up to date by capturing meeting notes and sharing notebooks with your team. • Bring people, projects, and ideas together with shared Spaces. EVERNOTE IN EDUCATION • Keep track of lecture notes, exams, and assignments so you don’t miss important details. • Create notebooks for each class and keep everything organized. --- Also available from Evernote: EVERNOTE PERSONAL • 10 GB of new uploads each month • Unlimited number of devices • Create and manage tasks • Connect one Google Calendar account • Access your notes and notebooks offline EVERNOTE PROFESSIONAL • 20 GB of new uploads each month • Unlimited number of devices • Create, manage, and assign tasks • Connect multiple Google Calendar accounts • Access your notes and notebooks offline • Home dashboard - Full customization -- Price may vary by location. Subscriptions will be charged to your credit card through your iTunes account. Where applicable, your subscription will automatically renew unless canceled at least 24 hours before the end of the current period. Subscriptions may not be cancelled for refund except as provided in Evernote's Commercial Terms. Manage your subscriptions in Account Settings after purchase. --- Privacy Policy: https://evernote.com/legal/privacy.php Terms of Service: https://evernote.com/legal/tos.php Commercial terms: https://evernote.com/legal/commercial-terms 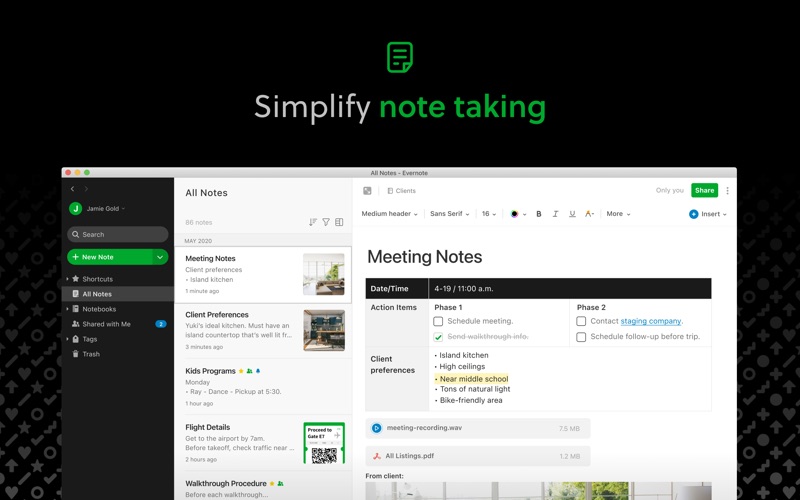 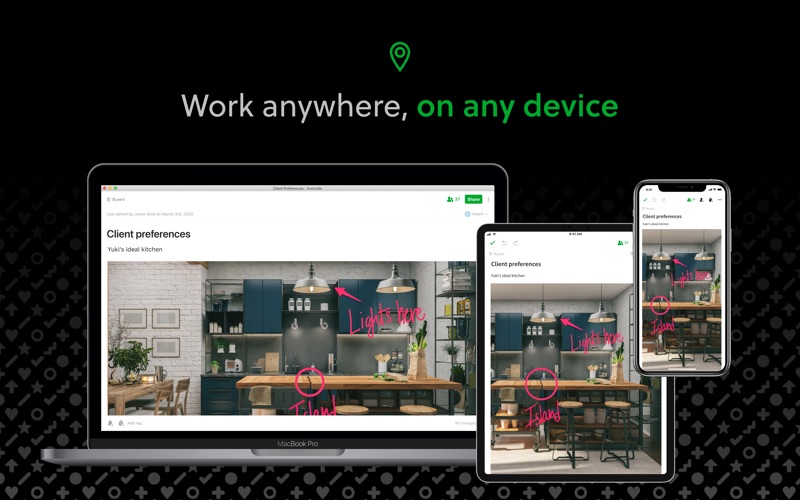 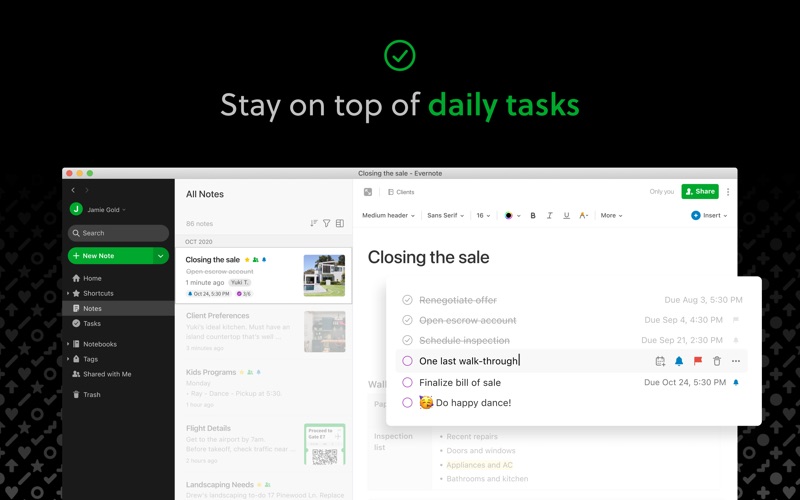 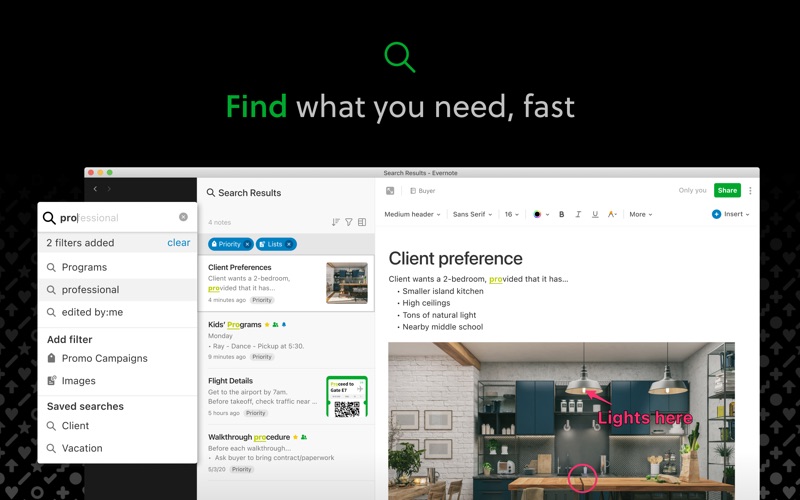 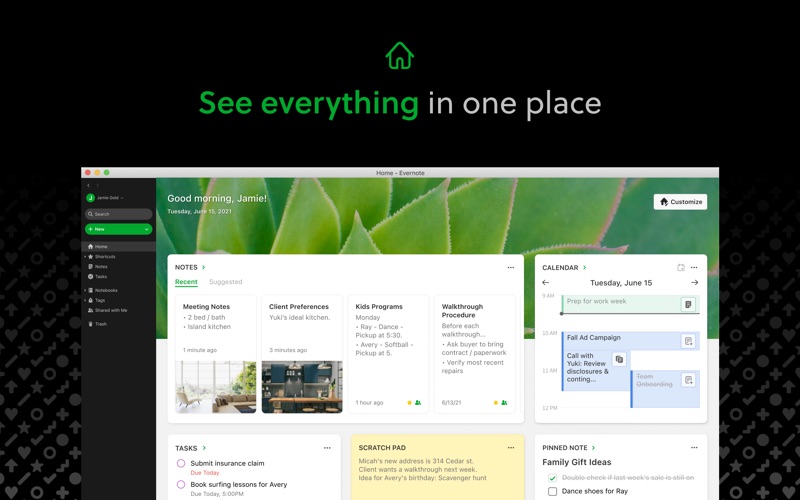 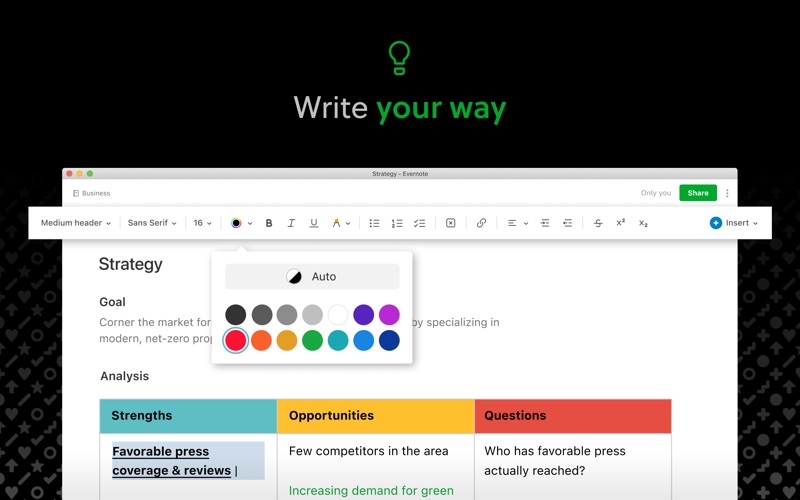 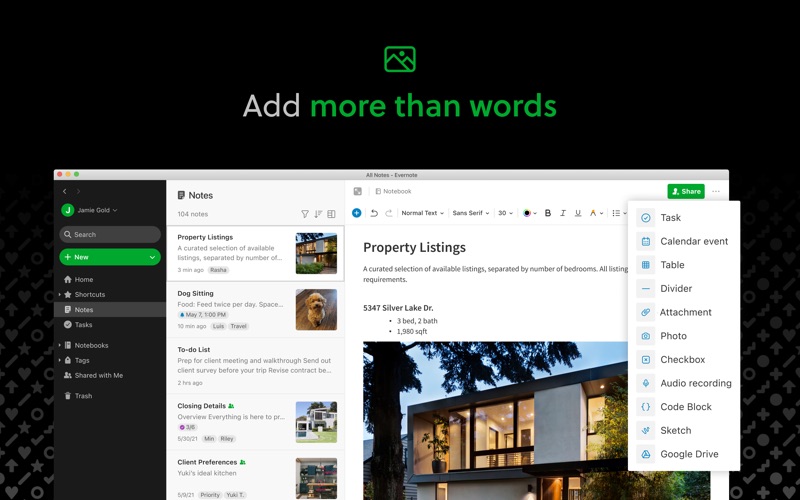 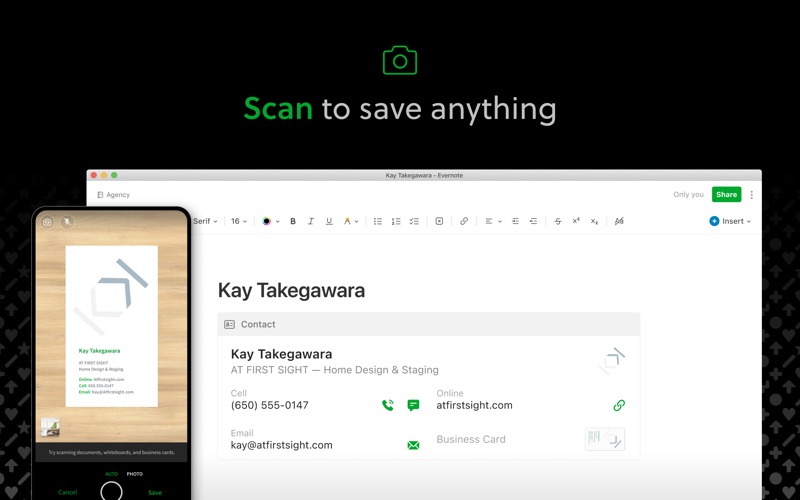 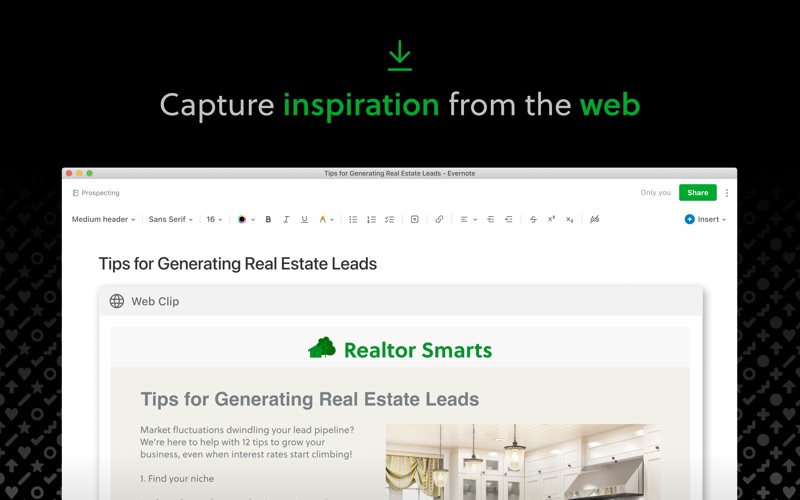 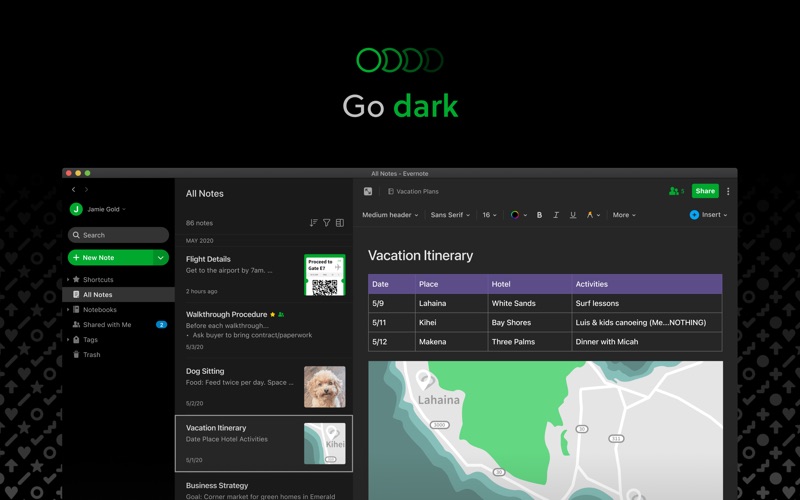 Can't even create the initial account using Apple ID as the login. Quickly removed app, won't ever try it again. If they can't even get that simple process right...
By BurpSwangy

No matter what I do on the computer or Iphone, it won't upgrade.
By kyleeeeeeee4

Evernote is great! I use it many times a day, have since very nearly the beginning of EN. They keep at it, making this better, fixing, updating, etc. It just keeps on going. Lots of new bells and whistles. I keep lots of note here! Nicely done! Just dropping in to say Thank You Evernote! Joseph
By MacFriendly

I know there are lots of people that are having issues with Evernote, but fortunately I've not had any issues for the last 10 months or so. I've been a long time Evernote user. First got an account in 2008 but didn't really use it much until 2013, then became paying customer around 2016. And can I just say I am really loving how things are going. This product is better than ever. I spend at least three or four hours in this app every day and just love it. My daily driver is an Intel-based MacOS, but I also use it on Windows, iPad, and iOS. I absolutely love the consistency between platforms that the new v10 version has brought -- especially between Windows and MacOS. And I really love the UI -- so crisp and clean and organized. The paid plans are kind of expensive, but it's well worth it to me.
By Sm4532

The latest version forces all my checkboxes to strikethrough. WHAT A COMPLETE NIGHTMARE!!!!! WHY ARE THESE EVERNOTE DEVS SUCH COMPLETE ARROGNAT AHOLES??????
By Appyogi

I started using Evernote back in 2008 and have been a paid subscriber ever since. After a few years of a rocky start they got the synchronization working perfectly and eventually got the UI into a usable state. For many years it was stable and functional and well worth the price. For some reason the latest updates have been rapidly declining in usability on Apple devices. The iOS version is practically useless in that it spends too much time with a locked up UI while the app is doing network things. And the fonts can no longer be set, so I have to hold the device two inches from my eyes to discern the text. I've taken to putting info into the iOS Apple Notes app and then moving the text into Evernote on my laptop when Notes synchronizes. However, this annoying disregard for usability has now migrated to the macOS version! They have recently switched to some new user interface that is utter garbage. I suspect it is some web app wrapped in an app frame instead of a real native macOS app. You no longer have a Formatting panel on Preferences (in fact there is no longer a preferences panel at all!) and so you can no longer set the Note fonts, you get some ugly, tiny, unreadable font that somebody with no understanding of usability chose for you. If you use the Zoom In feature it enlarges everything in the window, the list of notebooks, the toolbars and well, everything on the screen! Worse, if you have two windows, it enlarges everything in both of them. Why? One of my main reason for using a macOS laptop is that I can set the Accessibility options to compensate for my visual impairment and all the apps play along nicely. Evernote, however, totally ignores this and has now become extremely irritating to use because you can no longer customize the UI. Afer being a loyal customer for over a decade I have started looking to alternative. I have nearly 10K notes in it and now I have to be concerned about moving that data to some other form. Apple Notes maybe, or some combination of folders containing documents for the notes, perhaps in the Documents file tree so that I can have iCloud do the synchronization, which is not as good as Evernote's synchronization, but if I can't read my notes that no longer matters, iCloud is probably good enough. I suspect that the folks making decisions at Evernote have decided to focus the company on groupware and are not maintaining the code for Apple devices, but have switched to some mediocre write-once, run-anywhere web technology that works OK on most devices. This never works out well in the long run, they are going to drive away all the Apple users and then realize that was a poor decision because we chose Apple for non-trivial reasons they don't undersand. That's a pity, this used to be a great product on Apple devices. Now, not any longer. I suggest not upgrading if you have an older version, I'm trying to figure out how to get back to an older version of the app.
By fgk

So slow on M1 Mac

I'm a longtime paid user of Evernote. I'm now using an M1 MacBook Pro and Evernote is so slow on it. Also so many features which I don't need to use have been added that it appears to get in the way of using the app. Evernote has gone downhill.
By Media Baron

EVERNOTE for macOS is broken! HELP!!!

When EVERNOTE came out, it was awesome! AND, it keeps getting better! It's NUMBER ONE values to me are: 1. I can paste/put just about "any" kind of note in it, and it will save it and sync in on my local storage on all my devices. I don't have to connect to "the cloud" each time I boot up to access my stuff* 2. I like that I can use it as a resource daily, copying items back and forth, etc. *I am an often off-grid user, so Evernotes yearly fee for syncing my stuff "TO THE LOCAL STORAGE" is vital to me ... I will NOT have THE GRID when I get out of town. Lately, however, EVERNOTE for macOS has really been messed up! The formatting to my documents looks like HTML pages, with the double-spacing, etc. everywhere! The only way I can get around this is to go to the web browser-based version and copy from there! I am worried that this will corrupt "all" of my many, many documents!!! PLEASE, EVERNOTE - URGENT!!! FIX IT!!
By rAllcorn

The last two upgrades have been a disaster. I've been using Evernote since 2011 without any problems. The latest desktop app doesn't sync with the web-based app, which makes Evernote virtually useless for me. This despite following all of the instructions (reboot, uninstall/reinstall, etc) to get it to sync. I'm really at my wit's end. I've spent over 90 minutes just today trying to figure it out. I'd love to unsubscribe, but with over 1100 notes, I am kind of at Evernote's mercy until I find a load of free time to transfer everything elsewhere. Sigh.
By distracted HF

I love the new Evernote

The Evernote updates just keep getting better. I love the tasks, the ability to embed playable YouTube videos, the ease of formatting text, and the ease of sharing content (even with those who don't use Evernote). All my notes just look beautiful!!!
By Cindy.BB8