Luminos is the award-winning, all-in-one astronomy app that goes beyond simple stargazing by combining millions of celestial objects into a beautifully-rendered space simulation to amaze you! Our enthusiastic customers range from hobbyists to professional astronomers, and everyone in between. And now, Luminos features the largest catalog available on mobile, with more than 113 million stars! Whether you want to admire ancient constellations, watch satellites soaring overhead, find out what that brilliant dot is on the horizon, or recreate eclipses, Luminos has what you need. Browse the largest deep space image catalog of any mobile app, anywhere, or track 3D meteor showers now or from the past. Travel through time, identify craters on the moon, fly through space, watch the solar system in motion from high above, or see the multitudes of asteroids orbiting perilously close to our planet. Hold Luminos up against the sky and it will effortlessly guide you to find any star or planet. You can even get live sky charts and satellite alerts on your Apple Watch! Luminos makes it all easy and fun. Instead of buying many apps to get all of these features, Luminos includes everything in one low price. There are no in-app purchases to nibble away at your wallet and there's no advertising to distract you from views of the heavens. When you're ready to go even further, Luminos will be ready with you. If you're fortunate enough to have a computer-controllable telescope, then Luminos can command it for you to find objects quickly and easily. Detailed data on every object is easily available within Luminos, even without an Internet connection. Powerful planning tools help you make the most of your evenings by showing you exactly what will be visible tonight or any night in the future. Get out there and start exploring! For more videos demonstrating Luminos, check out our YouTube channel at http://www.youtube.com/user/wobbleworksluminos ! 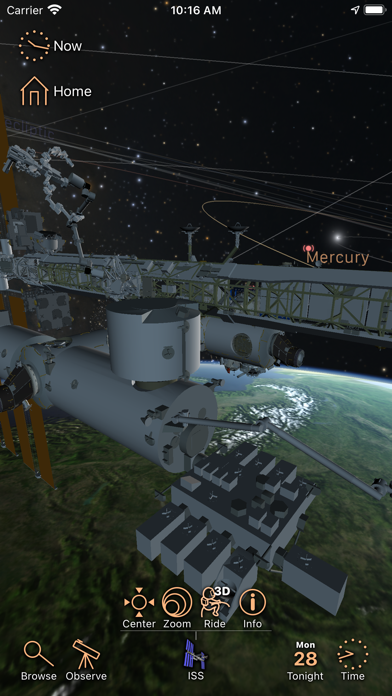 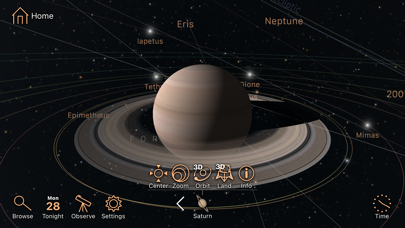 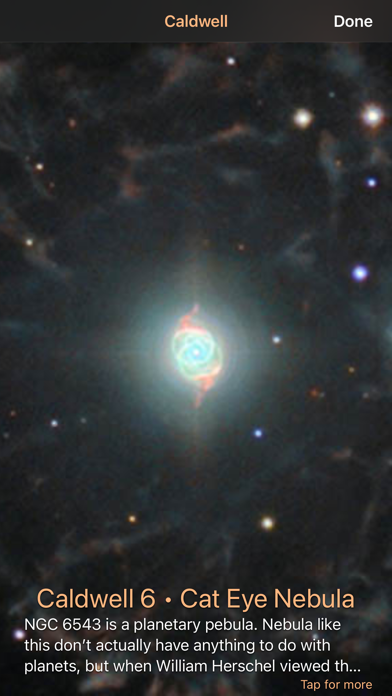 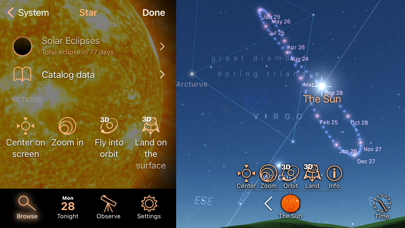 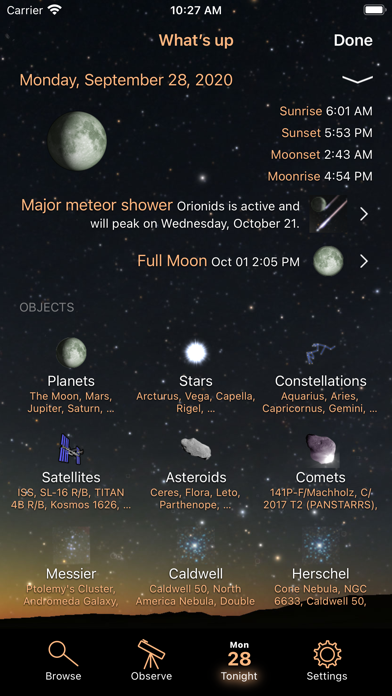 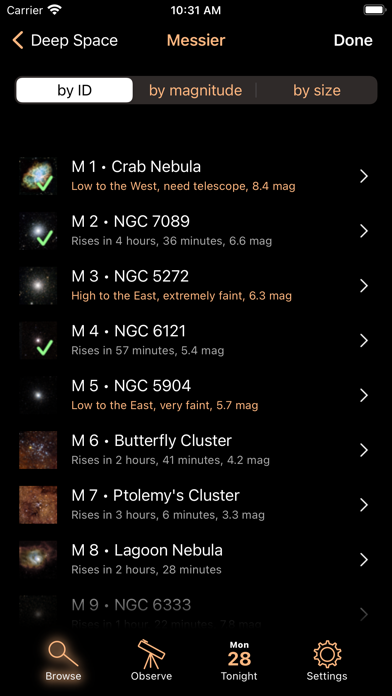 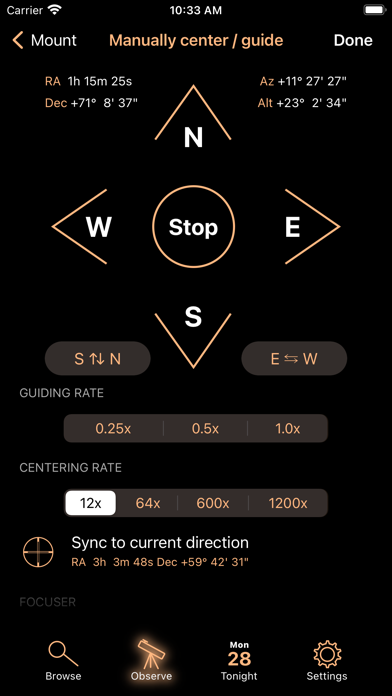 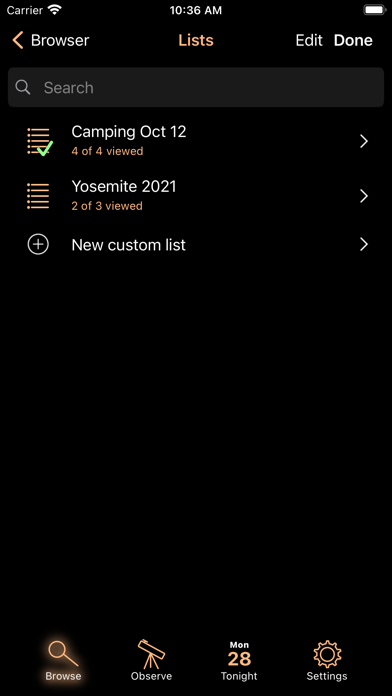 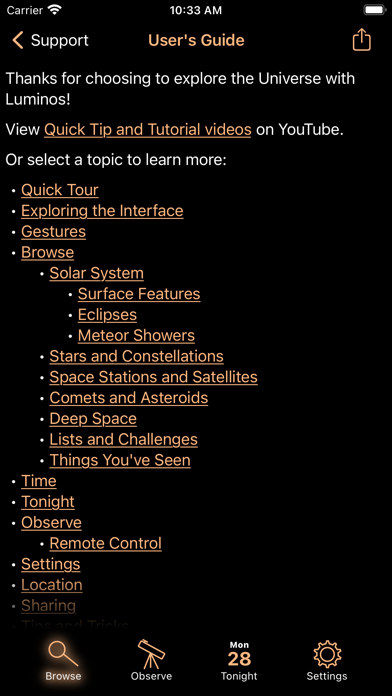 Love this app, but I would it if you added the ability to center on objects while in orbit mode

I love this app; it's better in some areas than Sky Safari, but I would love it if you added the ability to center in on objects while in orbit mode.
By GG777

A solid sky chart Astro app. However, there are several long-standing, dismaying features. 1. The Cardinal directions, such as East, ESE, SE, etc. float *above* the horizon in the sky itself—among the stars! That’s just plain weird. Every other Astro app puts them below the horizon line, where they belong. 2. Even with a middling density of DSO names, parts of the sky end up cluttered with labels — but far worse is that they shift their positions dramatically as one moves around the sky chart. That’s distracting and the sliding around of the labels is much greater than in any other app. You’ll be dragging the sky chart east or west and suddenly a label will come rushing from the left edge and slide across the sky! Then it will glide left or right, sometimes up and down, etc. Compounding the problem, it becomes hard to tell which object the label belongs to as it moves to the left then to the right, then higher or lower, etc. All this is vertigo-inducing. 3. The labels are an odd mix — mostly long popular names and a couple of IC labels. But there’s no option to show M or NGC numbers! That’s a striking omission. 4. Tapping on an object leads to a set of center, zoom, & info buttons appearing in the sky — with a mini photo that’s barely discernible. It’d be so much better if tapping on an object popped up a larger photo with information right away — with choices below that for further actions. 5. Settings remained buried under a Search button; a strange location. It should be a top-level choice — e.g., right beside the Observe or Date buttons. Urge the developer to play with other apps, e.g., Sky Safari and the original Starmap Pro to see how all these things can be much better handled!
By AstroPaul

I made the mistake of updating to the cloud storage version before taking my AP mount into the field with my iPhone 8+ running ios13. It erased all the saved IP/port etc info for the network connection and I didn’t have the info with me. The only reason I use this rather than Sky Safari is the superior mount support, so this poor experience (no QA/attention to detail?) left me disappointed enough that I will not be recommending it
By diamantine

Love it, definitely would recommend a purchase.

Listen this app is exactly what your looking for If you love space, and space facts, own or plan to own a telescope, or just curious about what’s above your head at the moment this is the app for you. The price tag might seem steep but the information value, easy to use interface and level of stellar catalogs you get is worth it. Besides being vast in data this app is very informative, visually pleasing and a grate night sky navigation tool for novice and experienced astronomers. Telling you direction, ascension and magnitude of celestial bodies and stellar objects. On top of that there is an entire satellite catalog for you to track and view. It also has built-in compatibility for most rotor based scopes so you can keep speedy object in view. This app is a definite must have if you are an aspiring astronomer or astrophotographer.
By Deno242

I initially had issues with the app and had to reset my settings. After that bubble the app is working great and I love it. It is worth the money if you love stargazing and want to know what’s happing in your portion of the sky. I first used it while on a Caribbean Cruise and had issues because of spotty internet connection. I like how I can track what I’ve seen . I keep learning how to use the app every time I use it.
By Bjhayer

I didn’t order this app

I have no idea how this app got on my phone. First thing I knew about it was when I received the email receipt. While looking around the app, I noticed that tapping the home button never worked- instead it thought I had selected some obscure star that happened to be right next to the home button. Can you tell me how to give this app back and get a refund? Has anyone else had this app appear on their phone WITHOUT ORDERING IT? I was wondering if I got hacked or something because I don’t have kids and my wife does not use my phone. The ONLY way the purchase could have occurred would be perhaps a caffeine induced double tap while perusing the app on the App Store or a side effect of an ulnar nerve problem that makes two of my fingers numb. Anyway, I’ve had it way too long for any attempt to get a refund , plus I’ve used it. No biggie, I pay more for a bottle of wine, and the wine is gone after one use! Thanks for the reply.
By I'd rather walk or even crawl

This is fascinating. I saw Star Wars in 77 and was memorized by all things beyond earth. This ap feeds my curiosity, desire to learn and fascinates me consistently. I love this technology.
By Kristikylia

Much slower than competing products

Takes up to 1 minute to determine location, motion, etc. Downloaded both Stellarium and GoSkyWatch - which both were immediately responsive. This purchased app will be deleted ASAP.
By M. T. Field