Version 3.6 is now live featuring a brand new track and 2 new challenges. Update history: 3.5 - Added Pool Party Map. 3.4 - Added 2 new Challenges. 3.3 - Added 2 new Challenges. 3.2 - Added Beehive Map, Extreme Challenges and Mystery Tower. 3.1 - Added 2 new Challenges. 3.0 - Added 2 new Challenges. 2.9 - Added Monkey Heart Map. 2.8 - Added 2 new Challenges and Jolly Roger Extreme Map. 2.7 - Added 2 new Maps, 2 new Challenges, Festive Towers and Double XP! 2.6 - Bug Fixes 2.5 - Added new tower Spike Factory 2.4 - Added Trick or Treat Map and Spooky Tower Surprise. 2.3 - Added 3 new Challenges with unique gameplay elements. 2.2 - Added Blue Laser Challenge and IAP Extreme Maps. 2.1 - Added Firecracker Map. 2.0 - Added Challenge Mode. 1.9 – Added Sweet Tooth Map 1.8 - Added new tower Dartling Gun. 1.7 - Added DNA Test Map. 1.6 - Added Deflation Mode. 1.5 - Added Spring themed Daisy Chain map and IAP for Special Upgrades. 1.4 - Added Apopalypse Mode. 1.3 - Added new Sun God Temple Map. We are continuously working hard to bring you a whole host of brand new content updates over the coming weeks so stay tuned. You've been waiting patiently, thousands have requested it and finally it's here..... NINJA KIWI'S BLOONS® TD 4 HAS ARRIVED ON THE APP STORE! That's right the monkeys are back and this time there is a whole new army of bloons to burst. Featuring a whole host of new tower and enemy types, Bloons® TD 4 is the long awaited sequel to Bloons® TD iPhone. This time the monkeys are serious and are ready to take down the enemy from the land, air and sea. Utilising a new ranking system you can build up your experience and gain access to even more powerful towers and upgrades. Call in mortar strikes, deploy the monkey aces and harness the power of banana farms as you bid to take down the enemy in true bloon popping fashion. Bloons® TD 4 iPhone features a mix of classic tracks from the online game as well as a whole host of new tracks for you to master. The medal ranking system is also back to add a new level of difficulty to the challenge. Can you battle through all 75 rounds to earn the gold medal? Of course, even if you do, the fun doesn't stop there and you can continue the madness in freeplay mode. Discover how many rounds can you survive before the enemy overpowers you then challenge your friends to beat your score using Game Centre high scores. Bloons® TD 4 combines all of this with Game Centre achievements and there is even some special bonuses which you can discover and unlock by mastering the tracks! Features:- • All of your Bloons® TD 4 favourites, including the all powerful Sun God and Dartling Gun. • 25 different tracks plus 5 Extreme Maps (available through IAP). • Challenge Mode and all new Extreme Challenges. • 3 difficulty settings on each map, Easy, Medium and Hard for varying degrees of challenge. • Continue the popping frenzy in freeplay mode once you master a track. • Game Centre high score tables and achievements. • Special bonus unlocks. • Now includes Apopalypse and Deflation modes. 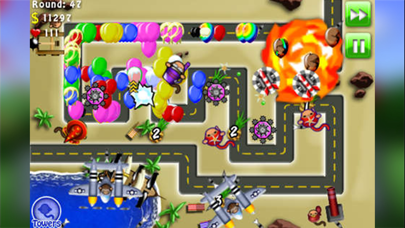 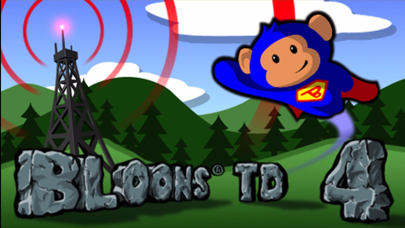 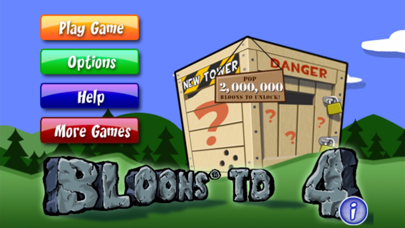 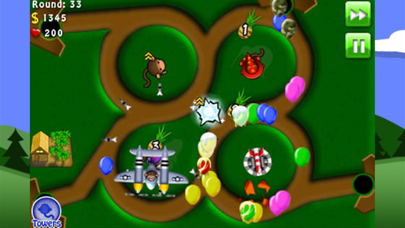 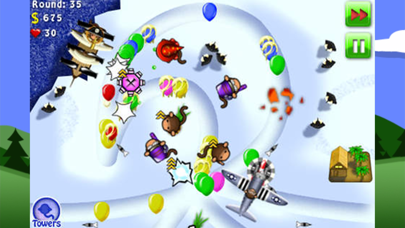 Fun game but some bugs that need to be fixed

I still love playing this game after all these years but when playing apocalypse on any level if I put any glue monkeys on the board the app will close itself and won’t save my progress. It’s really frustrating especially when I’m on a high level.
By Shrbear1234

Well I guess I wasted my money on this because the game crashes as soon as I click the icon to open it.
By nmlons

Idk if it’s nostalgia, but even though btd5 and 6 are out, this game is still fun, minus the rank ups.
By astar175

I have played this game for years and i can play hours and hours and still enjoy it! I highly recommend this game!
By \|0-_-0|/

Hey there is two things I have to say:1. I don’t have the Dartling Gun. 2. Why does the secret tower require 2 million bloons to pop. Please fix those and I will rate a five
By Neff family

Gameplay gets tedious after level 128 and it would be cool if there were harder blimps to pop or something!
By GAMEPLAY^GENERAL

I thought I was buying the same game that was on cool math BUT I WAS PLAYED!!! this game scammed 3 dollar out of MY CHASE BANKING ACCOUNT. SO THEREFORE, THIS GAME IS NOT WORTH THE 3 DOLLARS PLUS TAX!!! DON’T SPEND YOUR MONEY ON THIS WORTHLESS BLOONS TOWER DEFENSE!!!!!!!!!!! worst mistake of my life.
By x0cherry0x

Best Game ever
By Tacolover8805

Even thought BTD 5 and 6 are out, I still play this game. I really wish this game had an auto round start. I know Ninja Kiwi doesn’t focus on this game, but I wish they would add that feature. Anyway. Still a fun game.
By Oreomonster173