Welcome to the Planet Fitness App – The Gym In Your Pocket! Bring the Judgement Free Zone® anywhere with workouts and features for anyone, with the FREE PF App. Check out all our awesome features like always NEW exclusive premium workout content with Planet Fitness trainers to help coach you and iFit trainers, LIVE stream, hundreds of exercises that you can do at home or in-club, equipment tutorials, progress tracking for in and out of the gym, crowd meter and so much more! Key Features: Crowd Meter: Coming into one of our clubs? See how many people are at your club before you go to find the best time to visit! Just tap the Crowd Meter at the top navigation to view how many members are at your club. Workout Videos & Filtering: Always NEW workouts with Planet Fitness trainers, exclusive iFit trainer series, all to get you motivated and moving! Whether you're starting your fitness journey, or you just want to try something new, these guided trainer videos will coach and help you make the most out of your workout and feel good for at home or in-club. From beginner to advanced, there is a workout for everyone depending on your fitness journey and with or without equipment to help you no matter where you are. PLUS we have made it even easier for you to find workouts you love with our NEW workout filter. You can search workouts by the type, time, target and more to find what fits for you. Check it out yourself! Get ALL. THE. PERKS. Check out our exclusive Planet Fitness partnerships that are included in your membership! There's tons of offers and discounts on everything from workout gear to yummy snacks and gifts. Start exploring now. PF+: Daily LIVE stream and premium workout content with Planet Fitness trainers and exclusive iFit trainers with workout series built to guide you through every muscle group to get you motivated and moving. These range from 20 minute workouts to 5 Mighty Minutes for those needing a quick burst of movement and feel good vibes. Exercise & Equipment Tutorials: Hundreds of easy to follow exercise and equipment tutorials so if it is your first time using a piece of equipment in one of our clubs or need a reminder, you can just scan the QR code in the app and your video guide will help you get started for all your workout needs. Workout Tracking: Every minute matters, whether you set a new personal best, or took a stroll on the treadmill. Track your activity and watch those minutes and good vibes add up. Digital Keytag: Quick and easy touchless check-in at your Planet Fitness with avoiding unnecessary contact by checking in using your digital keytag in the app or through your Apple Watch. Apple Health: We included integration with Apple Health, to add the details of your workout, like duration and calories burned, to your Apple Health account. Download the Planet Fitness App today - You got this! 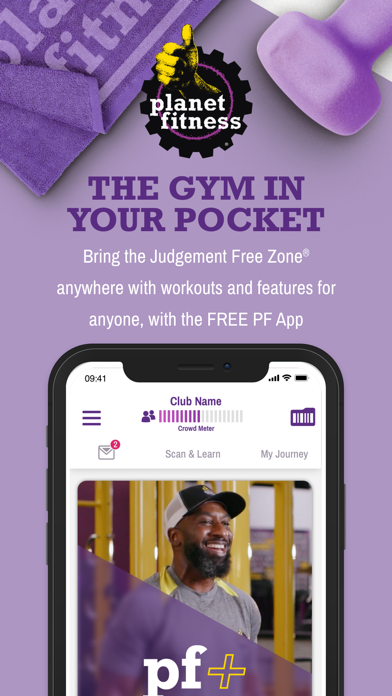 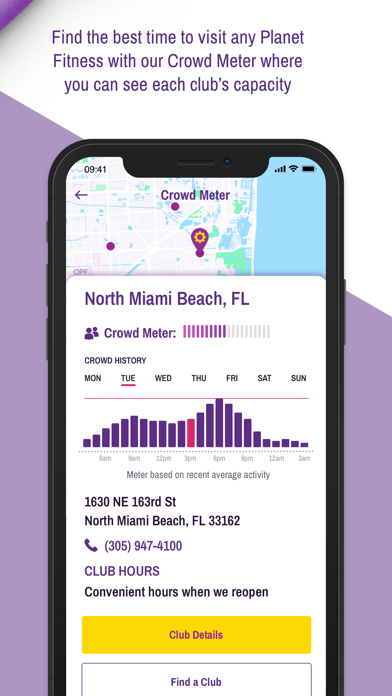 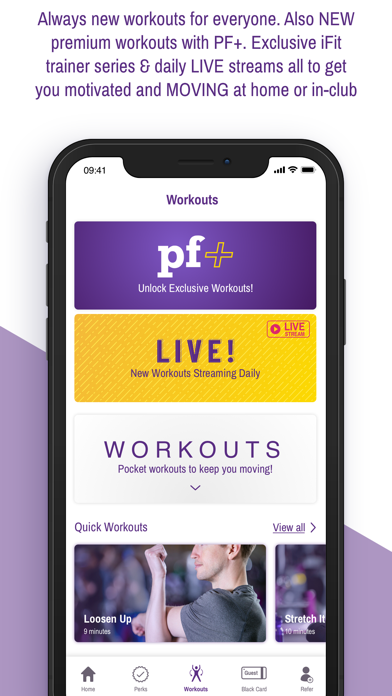 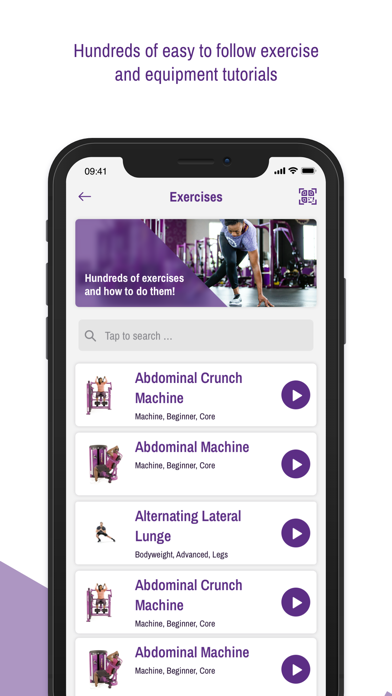 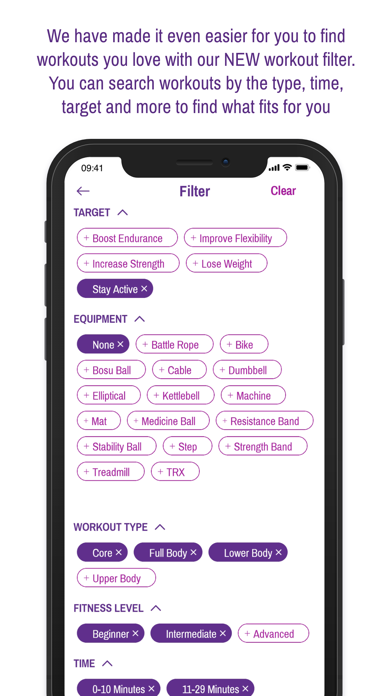 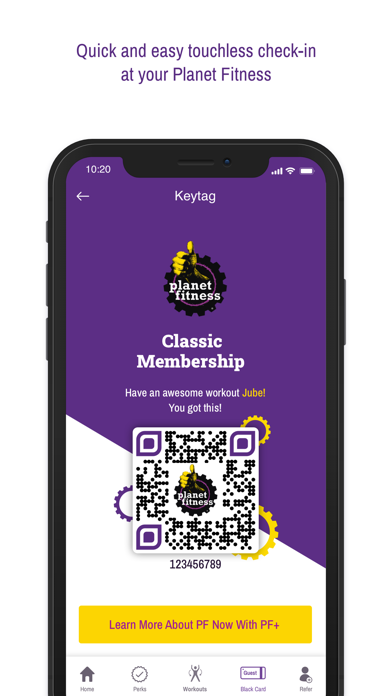 The app used to work fine but recently it has gone downhill. I am no longer able to access the PF+ workouts (even though I am paying for them)… the app constantly says “Oops, something went wrong! Give it another try or come back later” when attempting to access PF+. The app has also stopped tracking my visits to the gym and any activities I log. At this point it’s basically worthless and very frustrating. I deleted the app and redownloaded it to see if that would fix it - no such luck.
By JWolf28

The app is very slow, has too much advertising and self promotion. I would much rather have a card or tag👎 It was suggested that clearing the app cache might help the slow response, but it did not. It still takes a long time to retrieve my membership information and it often doesn’t find it the first time, saying that it does not have connection to the internet, and I have enabled access to cellular data. I would still rather have a physical card. This app is just a way to self promote and attempt to sell products and services. I am not a fan!
By Flatheadwilson

This is the only way to get your barcode, so you have to download it and give it your info to screenshot and not conveniently access the card, or you can have an 800th app on your phone lol I’d rather just use my id Update: the employees were either untrained or one of you is lying, because they don’t me explicitly there’s no other way to access the club AFTER I signed up, I also saw you say in another review to use the app o access your barcode, what’s true?
By nickmanekkkajajsk

Honestly the app is ok enough with its tutorials and stuff but for the activity tracker it should go WAY more in depth, otherwise it’s pretty much useless. I think first of all for the treadmill example, the incline/decline matter should have an effect, so we should be able to see how many calories that accounts for.
By batmanyoda#1

The app doesn’t support adding your key tag to the apple wallet like equinox does. I know they want you to accept Covid disclaimers but this is a highly desired feature.
By Johnl4th

issues with keytag on apple watch

wont link to account. have signed out and reinstalled on eatch a few times
By cyndaquil26

Interesting how I signed up on the app yet the app contained no way to view or update payment method or even suspend or cancel my membership. Now late fees are being added?!? Not cool PF, not cool.
By AIIColorado

You have to go in & sign papers to downgrade or cancel

I should be Able to cancel in app. Instead I have to go into planet fitness to downgrade or cancel membership. When I set up my membership I was able to do it in app.
By @XMARKLIVE

I have been using the app for a while, and have had no issues other than the app for the apple watch. Every time, even with a fully updated watch; I find it impossible to get my key tag to show on the watch to scan. I hope the developers find a way to have a seamless connection between the watch and the app. I get stuck after the “you got this” page on the Apple Watch.
By JakeRosendall

Number each machine so when it’s broken, members can make an order fix request through the app with status as well.
By ROYKREAG