Featured in the Wall Street Journal as one of "The Best Apps for Learning to Play Music" and as the Apple App of the Week, Songsterr gives you instant access to 500,000+ high quality guitar, bass and drum tabs & chords. Songsterr Tabs & Chords is a subscription based app. Free version allows you to check out all the features using 15 second previews of songs. To get unlimited access to all the songs, sign up for a $4.99 USD per month subscription (pricing may vary in countries other than the U.S.). FEATURES Tabs & Chords • Huge catalogue of 500,000+ accurate tabs & chords. • High transcription quality. There is only one version of tab per song. • Legality. Music creators get paid. Tab Player • Realistic Guitar Engine. Learn and play along with Songsterr. • Multiple Instruments. Most songs have tabs for individual instruments (guitar, bass, drums, vocal, etc). • Speed Control. Slow down tab playback to learn difficult parts down to 15%. • Loop. Play back selected measures over and over again. • Offline Mode. View and playback previously opened tabs offline. Cache size can be controlled via Settings app. • Solo. Hear just the instrument you are learning. • Mute. Play along with a backing track. • Count in. Gives you time to prepare for playing after tapping Play. • Chromatic Tuner. Tune your guitar via mic or adaptors like iRig. • Background Audio Support. Play along using e.g. iRig and Amplitube (make sure that "Background Audio" option is enabled in Amplitube) Navigation • Instrument Filter. Filter out songs that don't have tab for your instrument. • History. Instantly access tabs you viewed recently. • Favorites. Quickly access your favorite tabs. • Favorites Syncing. Sign in with your songsterr.com account to synchronize favorites with website. Price • Universal. iPad and iPhone. One app, two platforms, one subscription. Your Songsterr subscription will automatically renew each month and your credit card will be charged through your iTunes account. You can turn off auto-renew at any time from your iTunes account settings. SUBSCRIBERS’ AUTOMATIC-RENEWAL FEATURE: Your subscription automatically renews unless auto-renew is turned off at least 24-hours before the end of the current period. Your iTunes account will automatically be charged at the same price for renewal within 24-hours prior to the end of the current monthly period unless you change your subscription preferences in your account settings. You can manage your subscriptions through your Account Settings after purchase. No cancellation of the current subscription is allowed during active subscription period. Please go to http://www.songsterr.com/a/wa/privacy and http://www.songsterr.com/a/wa/terms for more information. 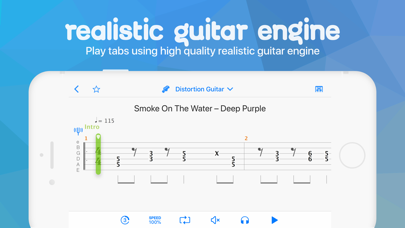 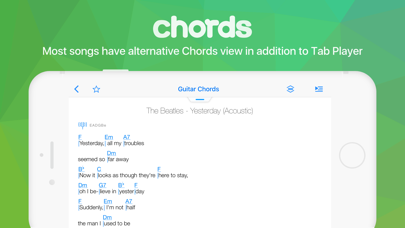 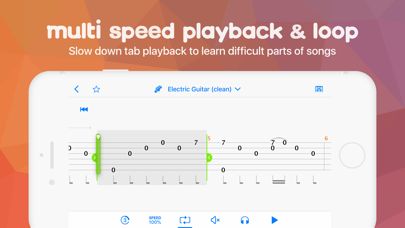 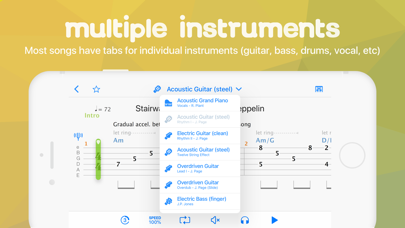 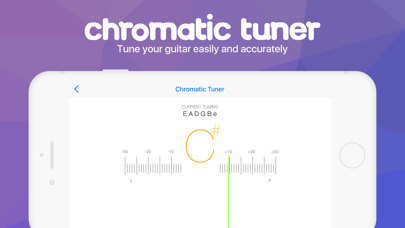 So I have had Songsterr now for a day and I noticed a few things. 1. The side scroll is a little difficult to follow especially when you are trying to learn a song. I’d like to be able to view it as a whole piece of sheet music. 2. The sound and the actual notes are not in Unison. Maybe it sounds a little better when playing slower stuff but at full speed for a song at 180bpm there is a very noticeable lag the sound plays after the note passes the green bar not exactly on time. This makes it very difficult to learn new stuff Overall I have this 3 stars because for $4.99/month this app should have these wrinkles ironed out by now. The timing is inexcusable because most people are learning how to play a song for the first time and it throws everything off.
By the chosen1

Every single song that I want to play stops you at a certain point. I get you have to make money somehow but pls can you just make some if not most of the song free. I think you would get a lot more downloads and more people that would spend their money on this. Idk if you guys make money by getting downloads and people subscribing but if you make money from downloads I think you would make a lot more if you made about half of the songs free. Thank you so much and I hope you take this into consideration. ❤️❤️❤️
By lol # puppies101

FOR GOS SAKE! How do you UNSUBSCRIBE TO THIS APP? And the answer I am told is ,to.go ask Apple. Trapped for eternity! And no I will not change this review until SOMEBODY unsubscribes me. Apple app center is not an answer.
By Pangeous

I downloaded an app trying to play some tabs, I can’t even read the whole thing 🤦‍♂️
By didigjisdkdubdidydudkud

Will not open. Crashes immediately on iPhone X running latest version of iOS.
By Gorak104

My only quarrel is that there are some tabs that aren’t timed correctly. Although the vast VAST majority are incredibly accurate, it seems as though the less mainstream songs aren’t tabbed well enough. Also, there are a lot of non mainstream bands that aren’t tabbed. Music is infinite so I understand why but either way, this app is as good as it gets.
By MarcArqShark

What a great app. I’ve been able to learn so many songs in a short amount of time. Easy to use.
By jkbass76

Hello ! I love this app but I don’t know why keeps on closing it when I’m barely opening the app 🥺
By Reues964

Just use the uhh.. one online

Fun fact, u didn’t ask but this is the first time me writing a review and it’s a 1 star, u gotta pay, the one online is free, just use the one online 👍🏻👌🏻
By aiyaiyai2019