Nutrients is nutrition at your fingertips! How much sugar is in an apple? How much potassium is in a banana? Discover nutrition facts on tens of thousands of foods complete with all vitamins, minerals, amino acids, fats, fatty acids, sugars, sterols, and more compounds like caffeine. Nutrients works completely offline with no internet required! Search our entire database of nearly 200,000 foods without using any data. "After a heart attack, I really needed a good tool to determine the fat content of my diet. Nutrients has a comprehensive, well-tended, and ever-expanding database of nutrition info. It's easy to search and attractively presented. Its built-in unit conversion ability makes it simple to compare servings of like amounts of diverse foods. Best app for this purpose I could find, and I looked at a bunch." ▸ Literally a lifesaver by DanCasali Create your own recipes! Add ingredients and select the serving size to get the most comprehensive list of nutrition facts for your recipes. "Being a type 1 diabetic, I have to count carbs in everything I eat. This app has made it easier to look up the nutrition information on many foods. Truly an amazing app!! Every diabetic should have this app." ▸ Great for diabetics by Diabeticfittie Keep a record of the foods you eat every day! Nutrients features a new and improved food journal with a complete breakdown of your daily nutrition and options to change the specific daily values of each nutrient. Nutrients even syncs your journal to the Health app making it easy to see what nutrients you're consuming with other apps. "Finally an app that gives a complete nutritional breakdown of food. This holistic approach takes the focus off calories and back onto food as a whole. As a nutritionist, I highly recommend it to all my clients." ▸ iPhone's best food reference guide by The Shazmeister Find foods highest in specific nutrients like vitamins and minerals. The nutrient browser sorts foods by the selected nutrient and food category. Find fruits with the highest amount of potassium or vegetables with the most iron. The combinations are endless! "I am getting my bachelor's in Nutrition and Dietetics so I am always looking up nutrition information. This is a beautiful, easy to use app that is full of nutritional information! I love it!" ▸ I love this app! by Evbaker92 Create your own list of favorite foods! Use this feature with the nutrient browser to find out which of your favorite foods are highest in specific nutrients such as vitamin A or iron. "Great app! Especially to nutritionists, when a patient asks for some random ingredient we don't know all its values! Works like a lucky charm!" ▸ Great! by Awesome short stories Show and hide foods by categories such as hiding meats for vegetarians or dairy & eggs for vegans to customize Nutrients to your diet. "This app is the best food app ever. It has never frozen on me and it is so informational. It helps my fiance and I keep healthy and buy the right foods." ▸ Amazing!!! by Kana557 Search for Baked Foods, Beef, Beverages, Breakfast Cereals, Cereal Grains & Pasta, Dairy & Eggs, Fish & Shellfish, Fruits, Nuts & Seeds, Oils, Pork, Poultry, Seafood, Spices & Herbs, Vegetables and more in Nutrients! "An embarrassment of riches! The most thorough and complete nutrition atlas I have ever seen! If you want to know what you eat I strongly suggest this great app!" ▸ Unreal! by Whatrix Search for foods like "cooked salmon" or "egg whites" and perform unit conversions using natural language such as "tablespoons to 1/4 cup" or "cups in a gallon". "Love it! The update is amazing. Very informative app. Especially if you are trying to eat healthier or get more of one type of nutrient. You can eat more of that type of food." ▸ Best app ever by Deen1stApps Nutrition data is provided by the USDA. 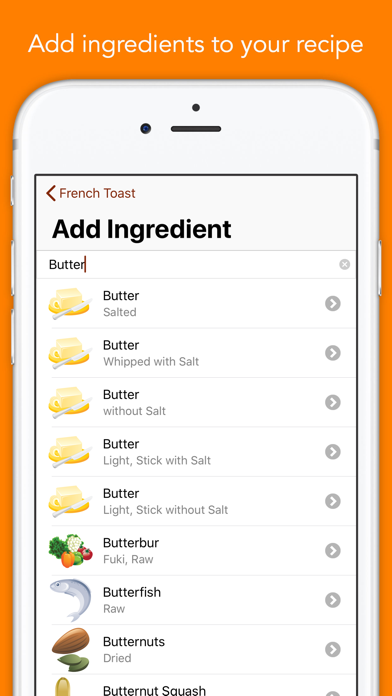 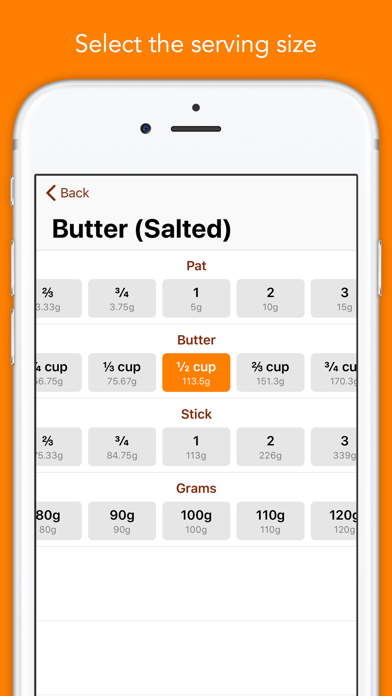 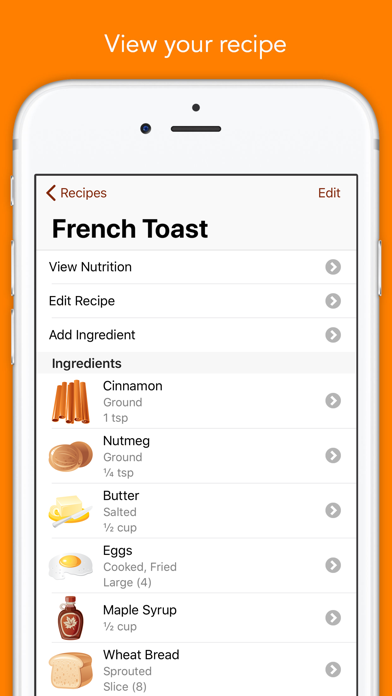 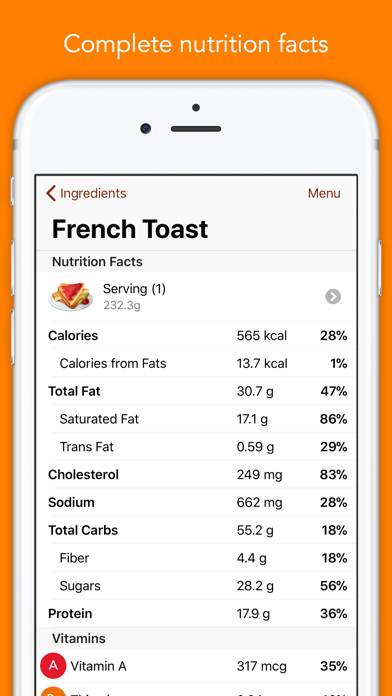 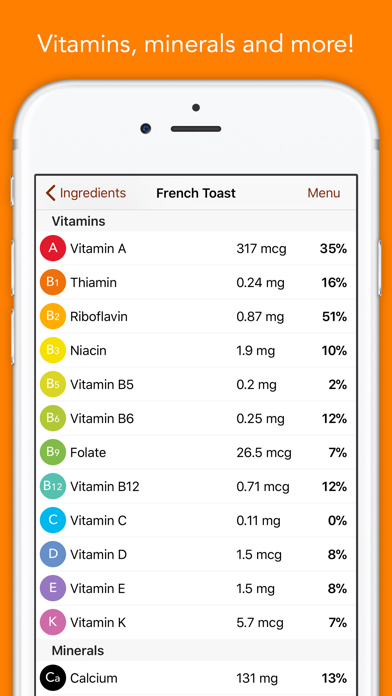 Wish it were more accurate

Either the nutrient listing on the back of the bag of Brad’s Crunchy Kale is way off, or your nutrient listing is way off. Whereas the Brad’s package says that there is 30% daily value of Vitamin A in 2 ounces of their product, the App says that there is over 2000% daily value of Vitamin A in 2 ounces of their product. I’ve noticed some other discrepancies as well, which tend to lower my level of trust in the App. I don’t regret buying the App, as it has helped me see where I am lacking in my diet, and it’s fun to see the bars on the chart increase when I add a certain food to address that issue. I just wish I could trust it more and don’t have to keep second guessing it.
By dduukkiiee

As much as there are aspects that are lacking (I’ll get to them) this is a great app in comparison to a lot of the others out there. I haven’t found one with this much detail and flexibility. Short comings: There is a bug (v8.3 currently) that will mess up “pantry” items (things you enter as standard foods not in their exhaustive catalogue) and I get duplicates instead of adding a new item, or an old item replaces the new one. It is bizarre. Same with “recipe” items. When entering a pantry item, it doesn’t allow you to put in decimals of micronutrients, and it doesn’t allow you to put in text to the service description (e.g. just “1” not “1 cup”) In the review of the day’s nutrients, it would be nice to be able to tap on a nutrient and have the contributing items drop down (e.g. what did I eat that had those trans fats in them? Have to look through each food and see what it was). In the profile, you can update all the nutrients, but it doesn’t reliably adjust the number of calories you target for the day. Even if your target is 3,500 (I’m an endurance cyclist, I can burn 8k in a day), it just says I’m at 100% my daily calories, but 60% of the main macros. Lastly, it would be nice to be able to copy foods from one day to another. Dinner one night is lunch the next day, so being able to copy items over would be nice. Overall I have found it helpful to dial in my micronutrients with this app and appreciate the variety of macros in common foods. I’ll be sticking with it, but with the wish list above.
By lakeadam

Everytime I attempt to scan a barcode to add a custom food, my app crashes and I must restart.
By rachfein

Just downloaded this app today to find it’s very buggy on my iPad. Newly created ingredients don’t add well to recipes. Existing ingredients don’t scale nutrients properly when adding partial or multiple servings. And as of ten minutes ago, the app is now crashing on launch. All other apps are behaving fine, so it’s definitely a problem with this one. Have tried restarting iPad, with no help. Wasted $4.99 and wish I could get a refund.
By GWGregg

This is a great dietary app with all the details you allow for. I just used the new pantry feature to add a food, I went add a second food, I could not figure out how to do so. I was expecting to see a plus sign that are elsewhere in the app. Also, in a future release would you incorporate “added sugar”. Thanks for your help and for creating this app!
By FiFi__1985__SXO

Just wasted $4.99 on an app that constantly crashes. I now see that other recent reviewers have made similar complaints, all without any response from the developers. Not impressed at all. AVOID THIS APP!
By ResIpsaLoq

I loved what the app does in allowing me to customize and track my nutrient goals on a very detailed level. However, the App crashed twice in the first two days after I downloaded so I had to reload and renter everything I’d stored. It’s not worth anything if I have to redo my profile, recipes and lose my journal everyday.
By dhaiwnzops

The app crashes repeatedly and will not open after adding custom pantry items. The only way to get it to open again is to uninstall and reinstall the app, which causes you to lose any recipes you've previously entered.
By jane rose

I paid $5 for an app that I was only able to use for two days. I have tried to use the app on my iPhone AND my iPad. Both devices software are up to date. I have had it downloaded for over a week and since the second day I’ve had it, it will not even open. I emailed the support email provided last week and no one has responded. Great concept but a complete waste of money and poor customer service.
By ABK1319

I would love to use this app but every time I try to use the scanner it crashes. Trying to find common foods and they aren’t in the database. Don’t waste your money until major improvements.
By Single cent