Surfline has been the surf world’s go-to for wave forecasting and surf reports since 1985, helping millions of surfers score better waves, more often. Use the Surfline app to know before you go anytime, anywhere. Keep track of current surf conditions. - View live surf cams at 800+ breaks around the world. - Get daily surf reports from our team of experts. - View wave height, live wind, weather, water temperature, and tide. - Choose to get notified when your favorite spots are the perfect conditions for you with Surf Alerts. Plan future surf adventures. - Use 16-day long-range forecasts to plan ahead. - Read swell analysis from our in-house forecasting team. - View detailed buoy charts and nearshore models. Relive your sessions and watch your waves. - Use Cam Rewind to watch and download your best waves (and wipeouts). - Sync your Apple Watch to log Surfline Sessions and get your waves sent straight to your phone.* - View detailed analysis of waves ridden, length of ride, and speed. - Share your rides with friends and on social media. Stay connected to all things surf. - Watch the world’s best waves with live coverage of major Swell Events. - Read up on the latest surf news, travel, training, and gear content. Take it from the pros: “Surfline is my go-to every day to know where to go. I’ve used it from day one and will be a lifetime Premium Member.” – Rob Machado “Surfline is my go-to for swell forecasts and surf conditions. I also love having access to all the HD cams so I can check multiple spots before ever getting in my car. I don’t even think about going for a surf without checking Surfline first!” – Keala Kennelly “I've relied on Surfline's forecasts on tour for years, and now I count on Surfline Premium to score good waves here at home." – Owen Wright Surfline has been named App of the Day twice by the App Store. *This feature uses HealthKit to monitor and record your calories and heart rate while you surf. -- Surfline Premium plan payments will be charged to your iTunes Account at confirmation of purchase. Membership plans will automatically renew at US $12.99/month or US $99.99/year (exclusive of taxes) depending on membership plan selection, unless auto-renew is turned off at least 24-hours before the end of the current period. By using Surfline’s product you certify that you understand and agree to Surfline’s Terms of Service (https://www.surfline.com/terms-of-use) and Privacy Policy (https://www.surfline.com/privacy-policy). Auto-renewal may be turned off in your Account Settings in iTunes after purchase. You may cancel your current subscription at any time but no refund of your remaining subscription is allowed during an active subscription period. A monthly user that cancels during a subscription month will not be charged for the following month. 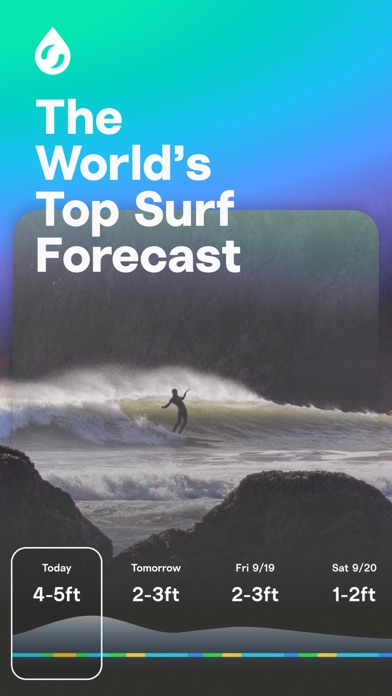 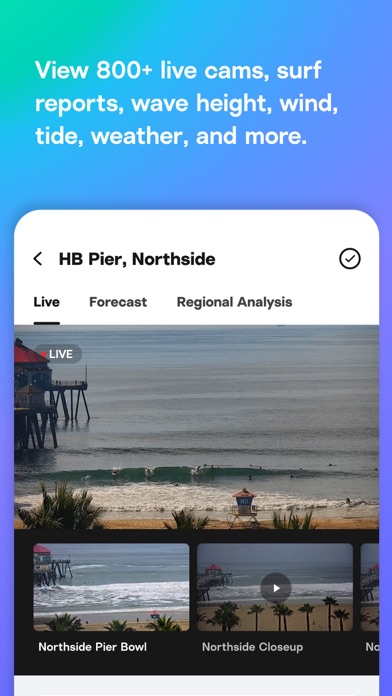 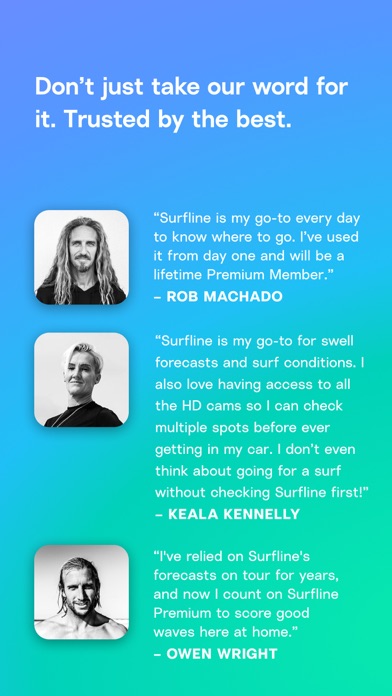 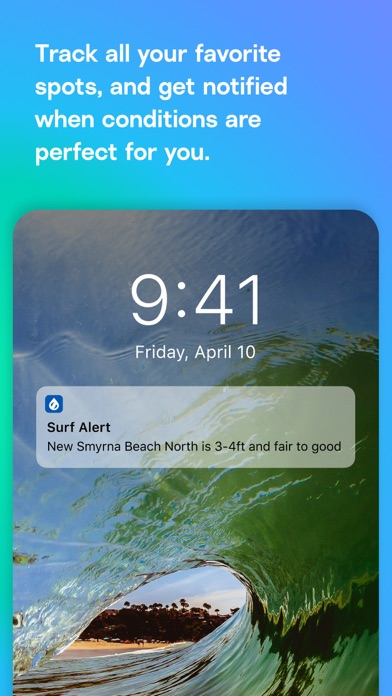 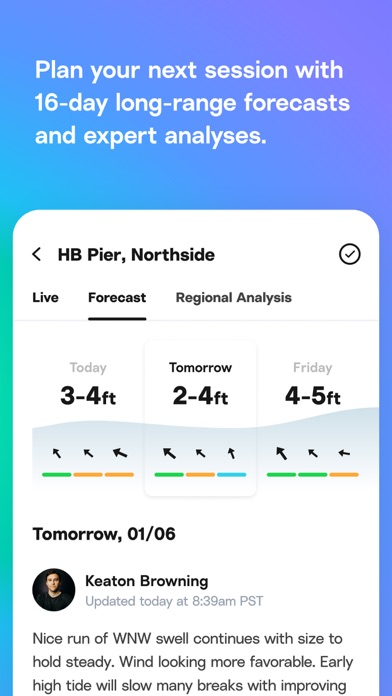 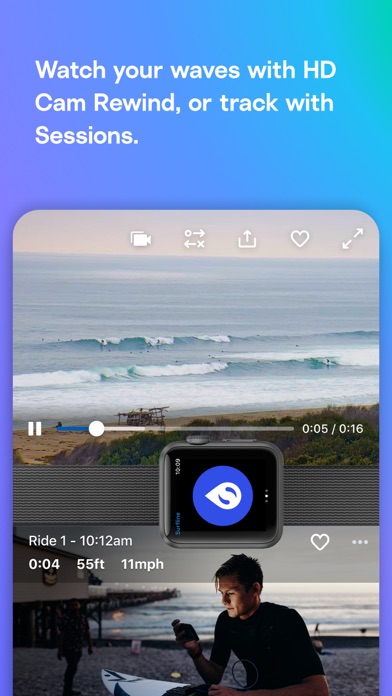 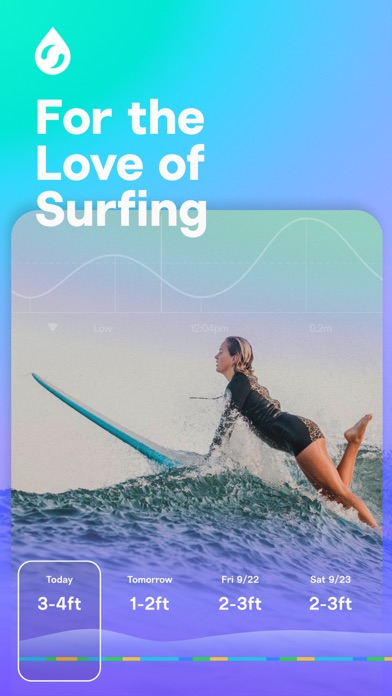 Good all around and go to app but…

Everything is great with this app. BUT the wave size forecasts tend to consistently say it’s larger than reality. Also please make dark mode for IOS!! Other then that it’s one of the best apps out there.
By johnny fin fin

Could be a little better.
By sancho rey

Try it….you’ll love it. Advanced knowledge of your home break? Worth it!
By Kolohe_Kid

Nice cams, but subscription does not make sense

I’m going to surf occasionally, perhaps once a month. Using the app on a regular basis to look at the sports to see if it makes sense on that particular day comes out really useful, but being subscription for an occasional surfer absolutely does not make sense the app I’ve recently climbed down on the ad supported cams, and I think that is a mistake.
By Al456789

They asked me to

Good app. Decent cameras. Pretty accurate information. Wish it would show a little more on the upcoming forecast and tides.
By gghghddgvfhnnok

Love the app but have one issue

When looking at the app or more specifically a surf spot. The video lags every second making it very annoying to work around. Additionally, not only when looking at any surf spots but the lag is also occurring in the rewind. Nevertheless, I tried to managed through this issue hoping it was gonna be fixed because of a bug issue or something. However, it’s been almost a month now and I am still having this problem. I don’t if it was just me. So, to make a long story short. I was just hoping you guys now have at least have an idea of what’s going on via issues in the camera/app. Otherwise, I have been a subscriber for a long time and will continue to be one until the day I die. So in other words, I have nothing bad to say. Love the app and everything you guys do. Just have this one issue that happen just recently. ✌️
By surfritsch

I like Surfline a lot because it cool and awesome.
By Creative Ty

I use Surfline more than any other app. Working from home , the new features focused on providing more hour by hour forecasting are useful to help plan my surfs!
By Zopop1