Sign up for a Free Trial of LivePhish+ to unlock the entire LivePhish catalog. Stream professionally recorded multitrack mixes of every night of Phish Tour on demand minutes after each show ends, and dive into the Phish Archives. The official Phish iOS app features gapless playback, scrubbing forward and backwards within tracks, Twitter, Facebook and email sharing of your favorite songs and shows. LivePhish+ subscribers can save shows and playlists for offline playback, access the entire LivePhish catalog, including new shows during a tour and any newly added releases, watch archival video releases, and more! Non-subscribers can stream regularly rotating Featured Shows, listen 24/7 LivePhish Radio, and stream everything in their LivePhish Stash. To stream the latest shows from current tours, sign up for a LivePhish+ subscription within the app. Sign up for LivePhish+ Subscription for $9.99/month, or $99.99/year. Users can also sign up for a LivePhish HiFi subscription that streams the entire LivePhish catalog in CD-Quality Lossless Audio. 7 Day Free Trials are included with the monthly subscriptions and 30 Day Free Trials with the annual plans. Both the monthly and annual subscriptions renew automatically at the end of each billing period of one month or one year, respectively. LivePhish Subscription Payment and Auto-Renewal Terms LivePhish offers auto-renewing monthly and annual subscriptions to stream music from the LivePhish catalog. Two subscription types are available, each with two tiers: monthly (30 days) and annual (365 days). All subscriptions auto-renew. A LivePhish monthly subscription is $9.99 per month and the yearly subscription is $99.99 per year. A LivePhish HiFi monthly subscription is $19.99 per month and the yearly subscription is 199.99 per year. Both monthly plans begin with a 7 Day free trial and the yearly plans begin with a 30 Day free trial. Payment will be charged to the iTunes Account at the end of your trial period if applicable, otherwise at the time of your purchase. Subscriptions automatically renew unless auto-renew is turned off at least 24-hours before the end of the current period. Accounts will be charged for renewal within 24-hours prior to the end of the current period. Subscriptions may be managed by the user and auto-renewal may be turned off by going to the users Account Settings after purchase. Any unused portion of a free trial period, if offered, will be forfeited when the user purchases a subscription to that publication. LivePhish Terms of Use - https://www.livephish.com/terms.aspx LivePhish Privacy Policy - https://www.livephish.com/privacy.aspx 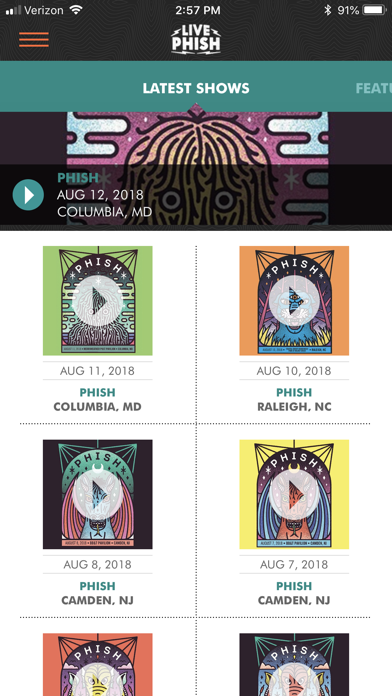 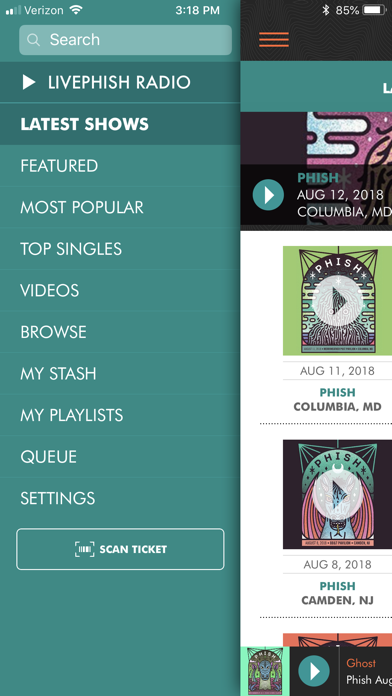 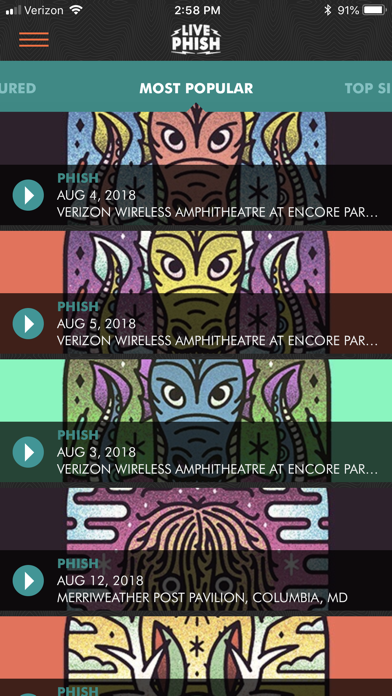 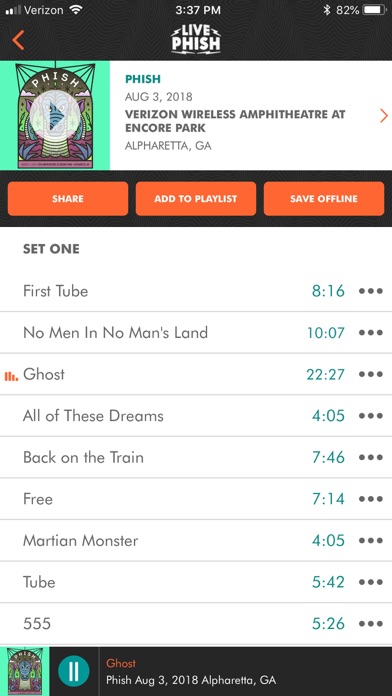 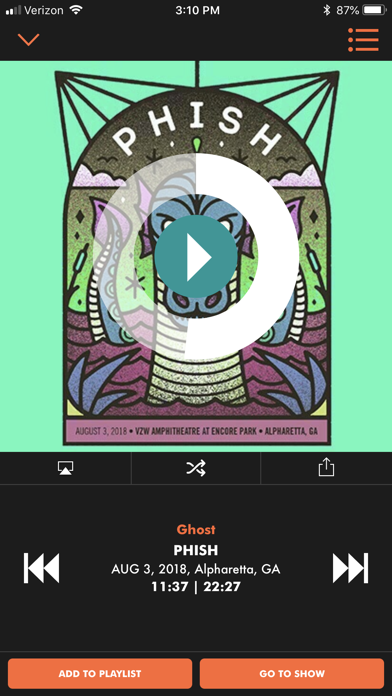 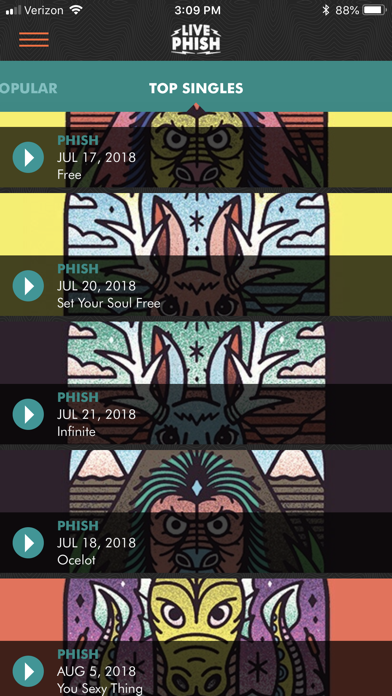 Music stops playing when my backlight shuts off, or when I switch to another app or even my Home Screen. Is that just me or does anyone else have this issue?
By BubbaKeith

Good... once you get used to it’s quirks

Earlier this year I started getting into Phish. I was a Grateful Dead guy, introduced by my step mom, but decided to try “A Live One” during an overnight shift and became a convert. Over time, trying to Phish out specific shows through Apple Music became enough of a chore that I got this app, and it’s subscription. There’s a lot of great stuff here, held back by some bizarre bugs and UX problems. For starters, lets say I search for a song. Cool, now I have a list of every show with that song. Let’s say I want to back out of that show and go to another one with that song... you can’t! If only shows the first 20 or so results and just stops scrolling. You have to back out of the song (or year, or album, or whatever) list entirely, then go back in... then you can scroll. It also likes to take audio priority over everything else. We’re you using the app earlier that day and now want to listen to a podcast or something on Apple Music? Too bad, it takes over all audio output until you close it. You can’t rename playlists after they’re created, and it’s hard to tell what shows certain recordings come from in compilation albums like “Live Bait”. I heard that 7/4/00 is a great show. It is! But you wouldn’t know that the entire second set is on this app through two different Live Bait releases. One off jams show up in the app, but not the website (IT Sound Check and Tower Jam specifically), and some shows have video, and others don’t and it’s hard to see the logic behind what shows do have video. Even shows with clips on youtube don’t have those clips in the app... But... if you start to work around these weird quirks, it really is a great service. There’s enough that needs to be done to fix it before I’d recommend it to someone, but I recently drove 5 miles round trip to get my first Covid shot, and this app helped fill the time. I’ve been pulling down shows for offline use for overnight shifts and it’s been great! Also, while I’m nitpicking, I’m aware it’s not an “official” resource, but being able to jump to a phish.net listing of a show to see what songs flow into each other, read reviews, get context would be amazing. I’m not sure on the etiquette of suggesting other apps in review sections but the highest rated audience recording app has exactly that at the bottom of each show’s “page”, and it’s great.
By Captian Awesome

Phish is the Best, and listening to them all day helps my soul!
By MHBPhish

I have to say, the ap has improved a great deal since the early days and I am pretty please with it. The only thing preventing me from giving it 5 stars is the lack of integration with Apple CarPlay. It would be great if it actually had full compatibility with car play. Yes, I can listen to LP through car play, but it really needs a native ap.
By schwitze

Love the app. Would make more sense to organize playlist by year rather than month, with non show playlists filing in alphabetically or chronologically at the beginning / end.
By HoodPique

This app continues to frustrate me. It is going to kill someone some day. Not kidding. It is impossible to get it to respond when disconnecting from home to car. This is where the danger lies. You will spend the first five minutes (on average) in your car trying to get it to respond to the new environment. It simply refuses to play seamlessly. Any other music carting app works seamlessly and flawlessly - as they should. Want another gripe? Sure! I have one: Neil Young only charges $20 a year for his app! He has as much content as this app and charges a fraction of the price! I love The Phish but am cautious when using this cash-grabbing, dangerous platform!
By snaps840

You wanted the best, you got the best

Honestly thought this was a KISS app, but I guess these guys will do.
By Henryrt00

Keep the shows coming!!
By brcicculus24