By The Slate Group, LLC

Enjoy Slate, the award-winning daily online magazine, on iPhone and iPad. Slate’s wry, insightful reporting and commentary on politics, news, and culture is now available in an application designed to optimize your mobile and tablet reading, listening, and viewing experience. The app offers a clean, easy-to-use interface and includes Slate articles, blogs, podcasts, and videos. Features include: - Access to the latest Slate articles and blogs, including Slate’s popular political and legal commentary, movie and television reviews, and Dear Prudence. - Slate’s popular daily podcasts, including the Political Gabfest, the Culture Gabfest, The Gist and Slow Burn. The app allows users to play podcasts in the background while browsing other content. - A home screen designed to showcase Slate’s top stories while allowing readers to browse the most recent and most popular stories. - Tools that let users share Slate stories and features via e-mail, Twitter, Facebook, and SMS. - Our membership product, Slate Plus is now available via in app purchase. The app is free to download, however we do display advertisements within the app. Additionally we offer the ability to log in to your existing Slate Plus account or purchase a new Slate Plus account through the in app purchases. Your Slate Plus account can be used on your iOS devices as well as our website. To use your Slate Plus subscription on other devices you must create an account after completing your purchase. You can always create an account at a later time if you choose not to do so initially after your purchase. With your Slate Plus subscription, you'll receive: - Access to all Slate Plus content - An ad-free experience By creating an optional account you’ll also receive: - Single-page articles - In-page commenting - Bonus podcast segments - Early release, member-only and ad-free podcasts - Access to Slatesters - Access to premium seating at our live events - Early access to and 30% off tickets to our live events Slate Plus Subscription details: There are two subscription option available for purchase: $5.99 per month and $58.99 per year (Save 17% with the annual) plan. New content is continuously being published by our writers. Your account will automatically renew at the end of each month or year depending on your subscription. Payment will be charged to your iTunes account at confirmation of purchase. Subscription automatically renews unless auto-renew is turned off at least 24-hours before the end of the current period. You can manage your subscription and auto-renewal may be turned off by going to user account settings after purchase. No cancellation of the current subscription is allowed during active subscription period. Any unused portion of a free trial period, if offered, will be forfeited when the user purchases a subscription to that publication, where applicable. For additional information regarding Slate Plus please see our FAQ: http://www.slate.com/articles/slate_plus/slate_plus/2014/03/frequently_asked_questions_about_slate_plus.html Slate's Privacy Policy: https://slate.com/privacy Slate's Terms of Use: https://slate.com/terms For additional information regarding auto renewal settings please refer to this link: https://support.apple.com/en-us/HT202039 We are always looking to improve our applications. Please send your thoughts and suggestions to ios@slate.com. 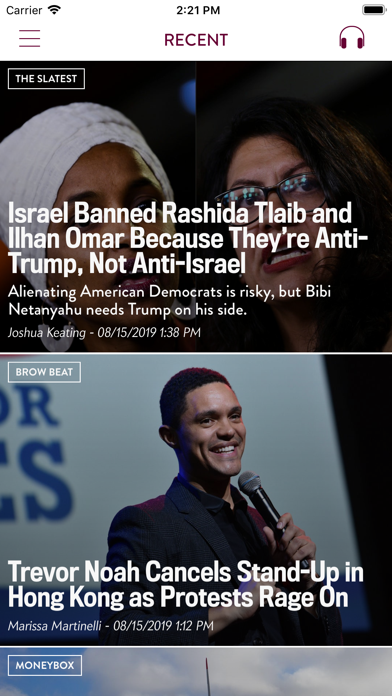 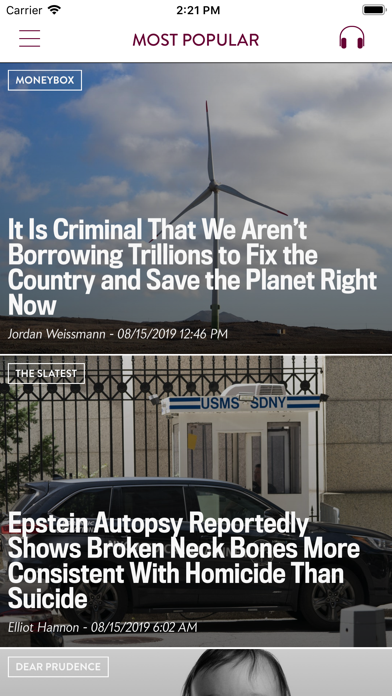 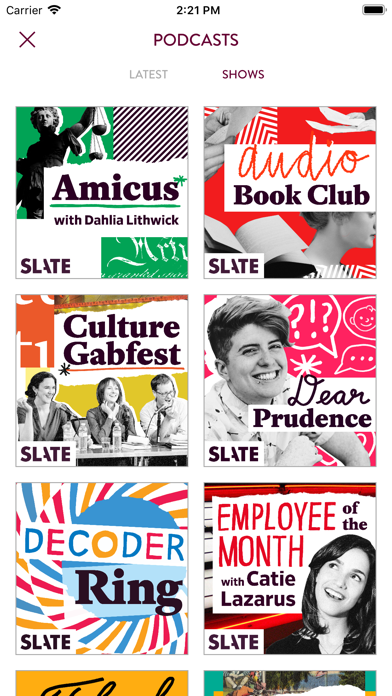 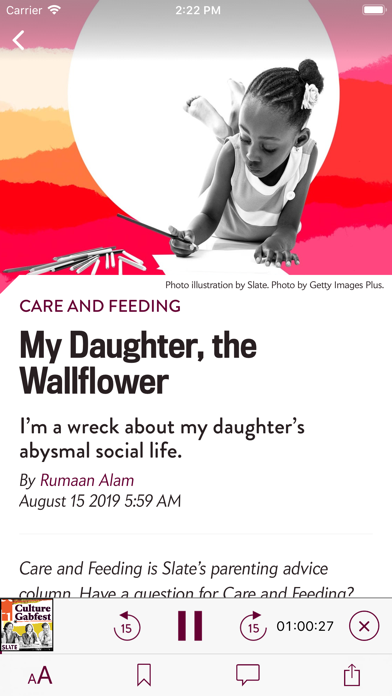 The SLATE iOS app is a complete and utter embarrassment. Slate continent can be good, sometimes excellent, but there’s obviously not putting their best and brightest on the app. The Apple TV app is non-functional now. How sad 😳 Original review from years ago (5⭐️): Haven't had a single glitch or crash. I love the "swipe" navigation, and the layout, and of course the sane & literate content. Thanks for a well-executed app with often interesting and intelligent articles (and fantastic podcasts).
By Yowzoe

This app is a disaster

I like Slate’s content very much, and I’m a Slate Plus member, but the app is practically unusable. I used to read Slate via my RSS reader, but recently that became impossible: Slate was requiring a separate sign-in which it often wouldn’t accept. So I switched to the app. It is equally frustrating. I’m signed in, but it seems to have trouble remembering that, especially when I try to switch to an article referenced in another article. At that point it wants me to sign in again, and doesn’t always accept the signin. Plus the search function is all but non-existent: try finding the News Quiz, which doesn’t seem to show up by itself. Finally, there are times when the app just freezes completely. PLEASE FIX THE APP.
By Historydoll

Have a subscription but app kicks me off

I’ve had a subscription for over a year, but suddenly I’ve been kicked off Slate on my iPhone and can’t sign in. I’ve succeeded in signing in on my computer, so what gives???
By Columbuswalker

I appreciate Slate’s unapologetically liberal stance on most issues, but the fact that they removed Mike Pesca, with no explanation because he expressed an unpopular view, makes me less interested in their viewpoints, if they can’t tolerate a range of viewpoints, no matter how uncomfortable. The censorious has to stop.
By Himoss23

Not sure what the problem is, but has persisted for years. This app constantly burns thru the phone and drains battery
By NickTsi

Been a subscriber for years. Now it won’t accept my login and the app restricts my free access. The slate app has had issues from the beginning. This app is horrible.
By Efranlje

Fix the app. It’s a mess

I love the Slate content. But the app is constantly freezing or forcing my phone to restart. If it’s because I have an older iPhone, then just say so. But it’s not worth the content to suffer through this app’s issues.
By Ted Terrific

I’m a Slate Plus member yet still must sign on constantly as the app doesn’t remember me from previous sign-ins. It’s not just the app. The website is the same. I cannot recommend this app nor would I suggest anyone join Slate Plus.
By dadadadio

When you sign in to Slate Plus the only way to leave that pop up is to hit the back button—which signs you back out. And the headlines are clipped to three lines, so you have to guess at what the article is actually about if it’s longer. Did anyone actually, you know, test this thing on iOS?
By texnerd5813

More by The Slate Group, LLC