The mountains are calling! Explore more mountains than any mountaineer! PeakFinder makes it possible… and shows the names of all mountains and peaks with a 360° panorama display. This functions completely offline - and worldwide! PeakFinder knows more than 650'000 peaks - from Mount Everest to the little hill around the corner. ••••••••• Winner of several prizes like 'Best of AppStore', 'App of the Week', … Highly recommended by macnewsworld.com, nationalgeographic.com, smokinapps.com, outdoor-magazin.com, themetaq.com, digital-geography.com, … ••••••••• ••• Features ••• • Works offline and worldwide • Includes more than 650'000 peak names • Overlays the camera image with the panorama drawing • Realtime rendering of the surrounding landscapes in a range of 300km/200mil • Digital telescope to select less prominent peaks • 'Show me'-function for visible peaks • Selection of the viewpoint by GPS, the peak directory or an (online) map • Can fly like a bird from peak to peak and vertically upwards • Shows the solar and lunar orbit with rise and set times • Uses compass and motion sensors • Daily updates of the peak directory • Does not collect any data. Your data is yours • Does not contain any recurring costs. You pay only once • Is free of advertising ••• Ratings ••• Every good rating (including those following updates) makes me happy. The positive ratings and reviews make it possible for me to continue to improve the app for you. Many thanks! ••• Support ••• In case of questions, problems, mistakes, missing mountain names and ideas for future expansion, I am happy to help you. Please write to support@peakfinder.org. 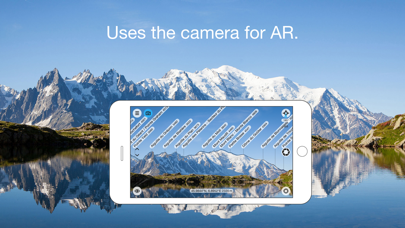 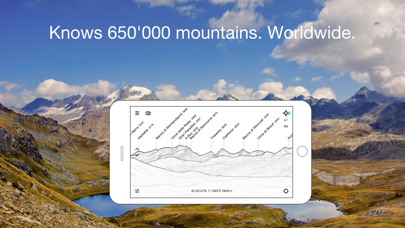 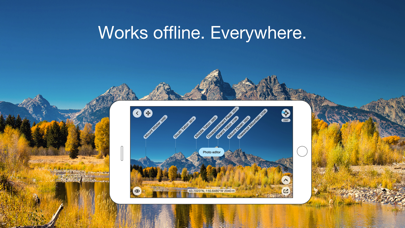 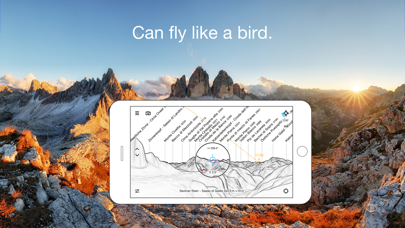 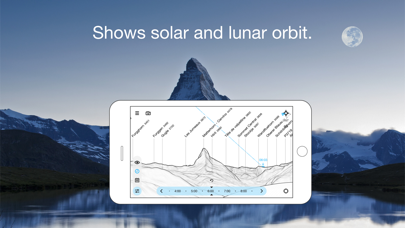 Works great! Worth every penny.

If you’ve ever looked at the horizon wondering “what peak is that??” This is your app.
By adriatic

Wow! This is great.

I live in the Sierra foothills. And now I can accurately identify all the mountains and peaks around me. I love this app.
By SonoraSH

Couldn’t correctly identify the largest peak out my front door. Wrote to report the error but that was 2 months ago. Total fail.
By IamIthink

Just downloaded and love it so far

My only wish is that it can tell me not only mountain peaks but what the name of the mountain range it is in.
By anchmike

Yesterday...a couple of days before Christmas...I was standing directly in front of the Colorado 14er Quandry Peak just to see if this worked. I did this because every time I’d used it in the past, Colorado, Wyoming, Montana, I’ve thought it wrong. So I tried it at a mountain I’d trekked up, photographed and generally know well. It was not even close. Quandry wasn’t even on the screen. So I tried it again today, pointing at the front range south of Denver. Pointing due west at Mount Evans, I saw Horsetooth mountain, which is about 90 miles due north, showing up about SSW from the direction I was aiming my phone. I should get my money back. And, in fact, I want my money back.
By disappointedpeterhk

PeakFinder is great fun and never fails to impress friends and strangers! The developer adds sensible new features that keep it current and relevant, but not bloated. For example the ability to take annotated photos or to chose a viewpoint anywhere in the world from a map. Don’t hesitate on this one, highly recommended.
By MountMango

I like the app, but I found that some mountains height is wrong. For example Middle Palisade is shown as 13530ft, but it is 14019ft.
By SergeiSMTH

Orienting ourselves and guests is fun.
By photophobic

I hike frequently in the eastern US in Va, NC, and WV. Purchased hoping this would be informative. I found it to work, partially, only once out of numerous attempts. Some attempts were in well known places with clear mountain vistas. Nothing! Regret the purchase!
By stevefhandtool

GPS is always off

This app is neat but I’ve noticed that while my phone’s GPS puts me in the right place, this app is always off by 6 or so miles. Sad I paid for something that’s this wrong all the time.
By Soon to be Baxley