"Catan", the legendary strategy game provides gaming fun anytime, anywhere. True to the original game, you can compete with up to four players for the most settlements, the longest roads and the largest army. You can trade with each other and claim the precious land with all its resources. The game allows you to challenge other Catan fans online via cross-platform multiplayer to prove your strategy skills or play against the AI: Various computer opponents, each with their own individual characteristics, will prove themselves worthy competitors: the pirate Jean, who knows no compromise, Vincent the merchant, who never allows himself to be cheated, Sean the knight, who takes what is rightfully his... The popular Catan expansions "Seafarers", "Cities and Knights" and two new special scenarios are available as In-App purchases. The complete Seafarers expansion includes more than 10 additional scenarios with an extensive campaign. Become Harbormaster, discover new islands and extra game elements like ships, gold fields, treasures and pirates. Ahoy! The Cities and Knights expansion introduces various new gameplay mechanics that add even more variety to Catan. Invest new trade goods in city improvements to build one of the three metropolises of Catan – but beware of the barbarians attracted by Catan’s new wealth! You’ll need your best knights to fend them off! C&K contains a short campaign and 7 challenging maps. Exciting adventures await you in the two new scenarios "Enchanted Land" and "The Great Canal". Vanquish dragons and bag their treasures or build a canal to help barren grain fields bloom once more. Features: - Available languages: English, German, French, Dutch, Spanish, Portuguese, Japanese - Original "Settlers of Catan" rule set - Update 4.0+: Synchronous online multiplayer games - Smart computer opponents with individual strategies - Scrollable game board including zoom option - Freely combinable game settings - Game statistics - Comprehensive tutorial - Seafarers LITE: New scenario "The 4 Islands" and two additional game variants - Cities and Knights LITE: Test the new expansion in the scenario “The first Island” - 3 different graphic sets to choose from ***** Catan FAQ: Question: An expansion seems gone after an update or reinstallation of Catan or after restoring the device? Answer: Don’t worry! Your initial purchase is already saved in your iTunes account. You can restore your InApp purchases by selecting the restore-option in the Catan IAP menu. Question: I lost my campaign progress after reinstalling, updating or restoring my device. Is there any way to restore it? Answer: When saved games can’t be automatically restored, we’ve integrated a cheat code: In the campaign mode go to select player and enter „CatanWarp*“ (* = 1–15) as your player name and confirm. Exit the game via the home button and restart it. The campaign can now be continued from the specified level number (1–15). Levels up to the specified number will be unlocked in the custom game mode as well. Question: Are dice rolls really random? Answer: Of course! All dice rolls are 100% random and not modified in any way. We’re avid Catan players ourselves. We’ve played the iOS version hundreds of times while developing the program. There have been times when we won and lost a few games in a row because of the dice - just like when playing the board game! ***** Questions or suggestions for improvements: Mail to ios@usm.de We are looking forward to your feedback! For more information on news and updates: www.usmgames.com or visit us on www.facebook.com/UnitedSoftMedia and twitter.com/USM_News ***** 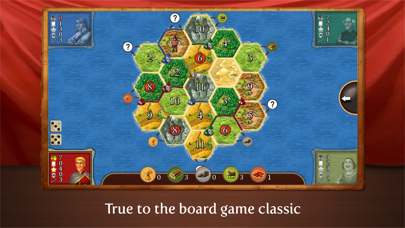 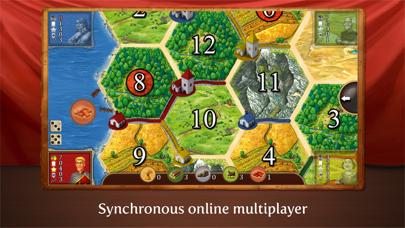 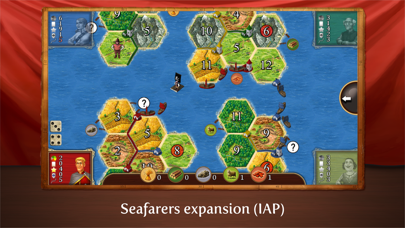 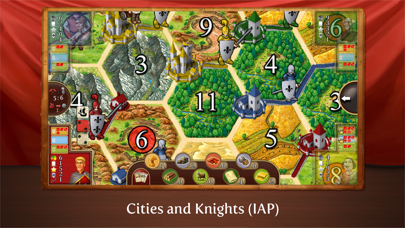 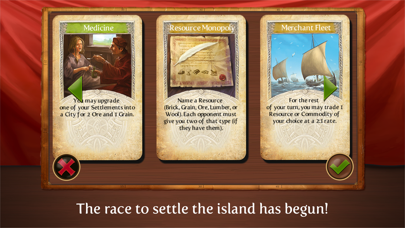 App does not work. Single player crashes the app
By Patriot28

This game is trash. The dice algorithm is absolutely rigged. Absolute garbage game. Horrible. I haven’t won this game once. DO NOT DOWNLOAD. worst waste of money in my life. This game is a joke. Soooooo bad. It’s a slap in the face to the actual game. The developers should be ashamed of this trash product.
By llkklkkjggjkf

The game cheats. Dice rolls are rigged. The computer will always roll whatever number it needs.
By down81town

The game of catan is one of the worlds greatest . When playing against friends it shows you their true colors . When playing random people you can learn who they are by how they play . The game is legendary it helped me beat my depression . It brought me together with many people bonding over this game . Mr.klaus is the goat
By Chad Desmond White

Board game is fun, in person with friends, this is not.

Human players quit and get disconnected every game. Then computer players take over and roll what they want, swap resources with each other and not you, and put the robber on you to take what they need. The little skill needed in this game does not make up for the randomness of your luck or the control the computer has over the game. This is not to mention the underwhelming app itself. The board game is fun because you play in person with friends. This is not.
By %^{>{>*|¥|

This is a fun game and serious way to waste time. I also enjoy the board game; the e-game is comparable.
By konagal

First, let me say that this is a great rendering of Catan as an app. If you’re playing online against other humans it’s really quite good. However, if you are attempting to play as a human against the AI just understand that you’re in the Hunger Games and the game is being manipulated in ways that make it nearly impossible to win. The computer opponents do not have advanced strategy or cunning, they have luck that defies probability and are probably gifted with development cards that they did not earn through resources. Oh, and they roll an insane percentage of sevens. Game play is tolerable until you get more victory points than the computer opponents. At that point, many of the times you earn resources, you will be stripped of them by a series of knights and sevens before you can use them. Additionally, many times while in the leading position and close to victory, I have been defeated by the AI claiming to have 3 or even 4 victory point cards. While possible statistically the probability is very low compared to the number of times I’ve seen it. The poor intelligence and high cheat factor of the AI makes this game unplayable, or certainly unenjoyable for me. I’d avoid it.
By SCDeMer

I have been complaining about this bug for years and apparently the developers just don’t care. If you have AI comments turned off and then quit the game and go back, they are turned on, even though the settings still has them off. The only way to fix this is to turn them on, quit, go back in, and turn them off. Maddening and dumb.
By Srhoades

I try to play this in my spare time for fun. I want fun. The robber is so incredibly frustrating. Also, has any real person ever gotten the monopoly card? I’ll go countless rounds without getting to keep a single resource because I get robbed. I wish I never bought this because I’ve wasted so much time getting upset when I just wanted to play for fun. Will play with the board IRL instead.
By marliamia

Yoga for Everyone: body & mind