Dropbox lets you back up photos and videos, and access files stored on any of your computers or mobile devices—from anywhere. And with advanced sharing features, it’s easy to send any file, large or small, to anyone. Features: • Automatically back up the photos and videos in your camera roll—all in the background. • Access any file in your account—even offline—and preview over 175 file types, no special software required. • Easily share large files by copying and pasting a link you can send to anyone, even if they don’t have a Dropbox account. • Scan documents using your camera, and turn receipts, documents, whiteboards, and notes into PDFs. Sign up now for your free Dropbox Plus trial. You'll have room for all your files, and space to spare, with 2,000 GB of storage. Our latest sync technology can automatically move stale items off your computer and to the cloud. And Dropbox Rewind lets you roll back any file, folder, or your entire account, up to 30 days. Or, existing Plus customers can upgrade to Dropbox Professional. With 3 TB (3,000 GB), you can store all your stuff—from work projects to personal photos—and have space to spare. You and your clients can comment on most file types without leaving Dropbox. And you can protect your work with a watermark, add shared link controls, or rewind your account up to 180 days. Before starting a trial or completing payment, you’ll see the plan price. This amount will be charged to your iTunes account at confirmation of purchase and on renewal and will vary by plan and country. Dropbox subscriptions renew monthly or yearly, depending on your plan. Your account will charged for renewal 24 hours before the end of your current billing period. To avoid auto-renewal, turn it off in at least 24 hours before your subscription renews. You can turn off auto-renewal anytime time from your iTunes account settings. You can manage and cancel your subscriptions by going to your account settings on the App Store after purchase. We’d love to hear from you! Join the Dropbox community: https://www.dropboxforum.com Terms of Service: https://www.dropbox.com/terms Privacy Policy: https://www.dropbox.com/privacy 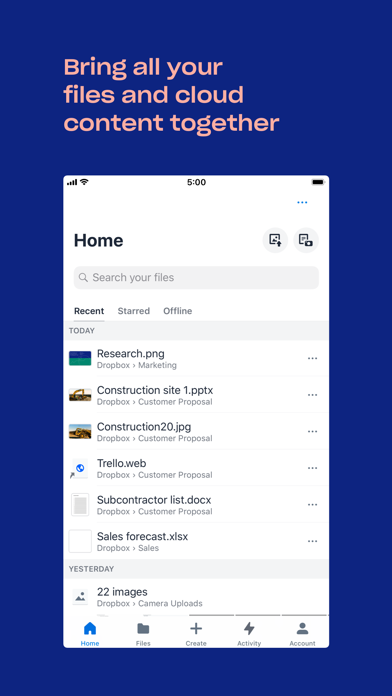 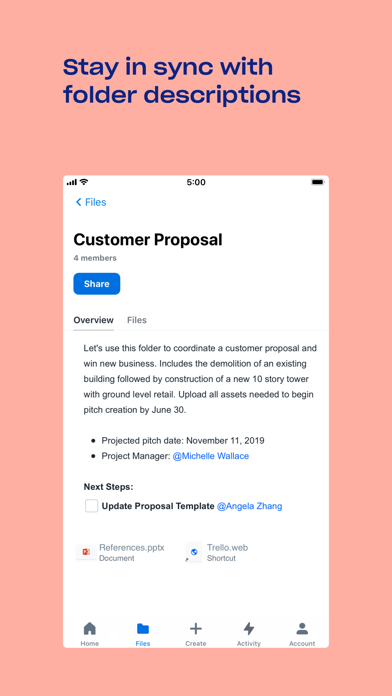 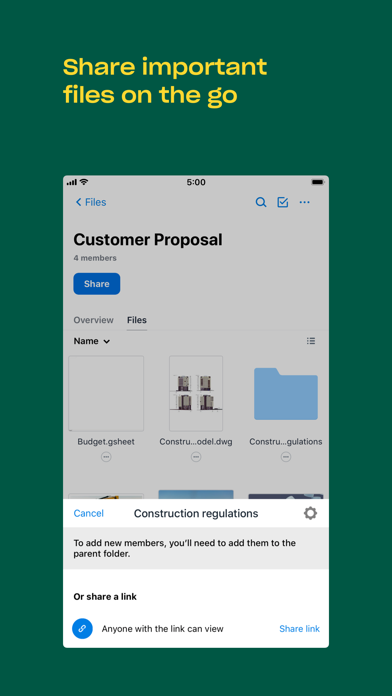 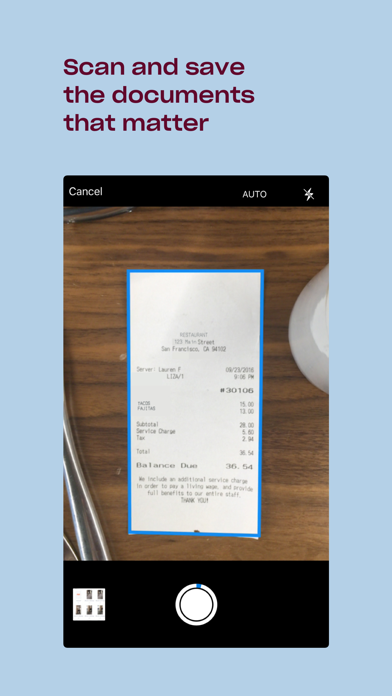 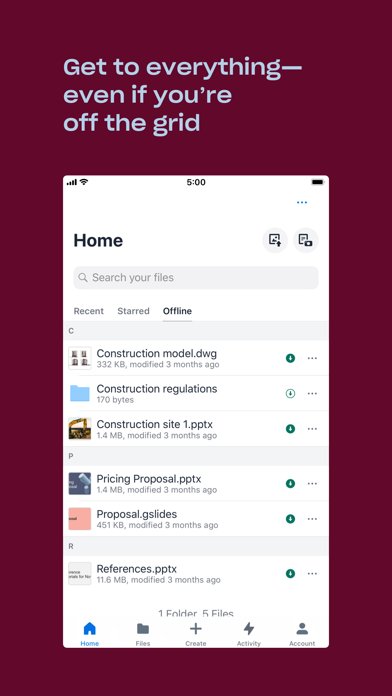 I LOVE DropBox, I’m able to store SO much content and files here and not worry about taking up spaces in my camera roll. It’s also hella easy to share with anyone you need to share it with! 5 Stars fasho!
By BrenstenL

I have recommended many to DropBox and have the maximum size you can get for free. And even after that I still recommended it to friends. Make a reasonably priced subscription and I’m sure you would have a ton of more paying customers! I now use Google Drive and Apple for my cloud needs. Only use Dropbox since a few friends still use it. And only on two devices since those greedy company decided to only allow a max of three devices I can assure you that they will be out of business in a few years!
By Abner055

Why Can’t I Insert : OR “ Within Title Of The Short Film?

Short Film: “Saya And The Feather”.
By AoiArekuShiro

Dropbox seems to work pretty well but there isn’t a point to use it. I can use iCloudDrive to sync all my devices for $1 a month. Dropbox just can’t compete with that.
By 24jllewis

App constantly freezes then crashes after 10 min use and only fix is to delete and reinstall to get another 10.
By Unhappygamer89

App will not open on my iPhone
By rios_al

02/25/20: Just saw a response from Dropbox Support, telling someone with “uploading” pic issues to..... “Turn on ‘Background Uploading’ to allow the App to Access ‘Location Data’......so app can work while not open”. Did I read that correct or what. Location Data needs “on” for background uploads for the App to be quick, responsive, & allow files/pics to be uploaded quickly etc.... 😱. Location Data DOES NOT need to be enabled, or it shouldn’t, for this or ANY APP TO FUNCTION/WORK properly. If it does, DELETE it, imo 🤦🏼‍♂️ I remember when bought my galaxy S3, wow...in doing so; received 100GB of free Dropbox space for 2 yrs. Was some kind of promotion for buying a Samsung Galaxy phone. Than I referred like 5 ppl, so received like an extra few GB. In all, I had around 105GB of space(or there abouts). Was awesome, had 5 devices connected & uploading all camera rolls/vids to a backup folder. Super handy, & used my Dropbox ALL the time. Then I get an email 1-2 mos before “honeymoon” was over saying my Dropbox storage is over the 15GB of space allotted to me. Than I find out that instead if 15GB of free space, they changed it to 5GB of free space, unless wanted to buy additional storage (& a tiered subscription every mo/yr). Kinda sucked having to copy 80GB of storage to external drive & took forever. I’m okay with Dropbox now & storage, as I have things managed & under control. Can only connect 2 devices now....kinda crappy, but dem da rules, w/ the continued 5GB of free space. Don’t mind all this, truly...I’m living w/ it. WHAT I HATE, is the UPDATES! Why? Thanks for asking. Here’s why(take good note Dropbox & other Devs/ppl): IT’S B/C YOU DONT LIST EXACTLY WHAT YOU’RE UPDATING OR DOING WITH THE APP, INFO, DATA, ETC... INSTEAD, YOU GIVE A CUTESY STATEMENT LIKE NETFLIX ET AL...OF TAKING OUT TRASH, KOW8NG THE LAWN, TWEAKING THIS/THAT....IMPROVING THINGS FOR US, & REGULARLY RELEASING NEW UPDATES WEEKLY TO JUST “TWEAK” AGAIN THE PREVIOUS WEEKS UPDATES! IF YOU & OTHERS WOULD TELL US WHAT YOUR DOING, IT WOULD SOLVE SO MANY ISSUES. IT WOULD ALLOW PPL A CHOICE WEATHER TO UPDATE OR NOT, MAYBE UPDATING WILL PREVENT APP FROM WORKING ON THEIR VERSION OF PHONE/OS(WHICH HAS HAPPENED MORE TIMES THAN CAN COUNT FOR ME/FAM/FRIENDS OF OTHER APPS ETC....), OR THEY DONT HAVE STORAGE SPACE & “CANT” UPDATE” BUT ARE WORRIED OF SECURITY PATCHES(& IF NO SEC PATCHES INCLUDED IN THIS PARTICULAR VERSION UPDATE, THEY DONT NEED TO WORRY...OR WORSE, DELETE APP CUZ DONT WANNA LOSE, COSTING YOU A CUSTOMER), THAT MIGHT NOT BE NEEDED IF NO PATCH INCLUDED ETC.... So please, real the mold....be bold, brave, & tell us what your changing/updating in the new versions of every update. Transparency goes a long way ya know, especially when we are trusting you with our data......just sayin’ ya know. Most Apps do list what’s new in the updates, heck....Apple does it, on their OS updates! Think about those apples...... Besides this, I like Dropbox & use it daily, but not “knowing” what I’m updating or allowing...is uncool & why a rarely update my App. The only reason I do update it, I MUST so it will continue working on my devices, otherwise, I don’t update any app that doesn’t list the new changes etc....ANY APP! Strange thing is, thought Apple required Devs to divulge to ppl what was being updated & why in the descriptions of every update &/or new install of an app/product; so then, why isn’t COs’ doing this then....Hmm... My score 3/5 b/c of lack of transparency in updates etc...FIX that & I’ll redo rating. Cheers y’all
By Litekid79

Dropbox is very proud of their less than mediocre cloud storage app. It’s 2020, not 2011! I’m very organized so I keep documents in organized files on my computer. I depend on apps to store documents and photos in albums on my mobile devices. I take pictures at horse shows and they need to be organized in named albums on my mobile devices! Dropbox was an absolute nightmare!! I’ll pay for Apple’s cloud storage as it continues to evolve. I like the ability to organize my documents, letters and photos in specific apps rather than wasting time trying to find things with the mess I had with Dropbox. Once Dropbox got rid of the carousel app, it became pretty useless to me. I was told I "Hey! This is what's great! You can create albums on your computer!" Great! I'll just plan on schlepping my laptop everywhere I go. If someone wants to see the album of photos I’ve taken, I’ll just try to shove my laptop in my pocket or a small bag. That's insane. There’s just no good way to really organize documents and photos on mobile devices with Dropbox. I’ve no idea why people still have Dropbox when they could get so much more from other apps than what they’re paying for a 2010 cloud storage service. I’ve talked friends and co-workers into dumping Dropbox and taking advantage of better cloud based storage, geared towards organization on mobile devices and they only wish they’d kicked Dropbox to the curb long ago. As cloud services become more competitive we’ll be using tablets more than we use laptops, that’s when Dropbox will find itself obsolete and out of business. I’ve transferred all my documents and photos to different apps and have a perfect system for a fraction of what people are paying for the Dropbox name. A business must evolve and with an increase in use of mobile devices, their app is severely lacking. Customer service loves to hear what Dropbox is doing right but when countless emails went unanswered, I ended up dropping their service and I’m so happy I did!
By Flyby777

I love Dropbox but the iPad app simply doesn’t work anymore. Crashes have not be resolved in months.
By Roniniku

I have the app for Dropbox and everything is fine except that it doesn’t load the pictures as fast as I would like them too. And I do pay a monthly subscription, I would expect it to work optimally but it doesn’t. This is my only complaint on the app version of Dropbox.
By Great low prices!