The easiest way to manage your family’s grocery shopping—and it’s FREE! "I love technology, but I also love simplicity. I've found the best of both in OurGroceries." —The Kitch review "After more than a year of using OurGroceries, we have been very satisfied." —Anne vs. Home review OurGroceries automatically keeps your family’s grocery list up to date with the latest changes—on every family member’s mobile phone, and our website. Nearly out of milk? Add it now on your phone and your partner can pick it up on their next shopping trip. Every change to your shared shopping list is visible within seconds on any other iPhone, Watch, iPod touch, iPad, or other smartphone grouped with yours. See items being checked off as your partner shops! You can also keep track of the key ingredients in your favorite recipes and add them all at once to your shopping list. FEATURES: • Take your shopping lists with you wherever you go. • Share shopping lists amongst everyone in your household. Simply enter the same email address into each copy of the OurGroceries app. • Add items quickly: on-the-fly completion searches past shopping list items as you type. • Cross items off the shopping list with a single tap. • Create as many separate shopping lists as you wish, or keep it simple and just use one. • Organize your items by category or aisle to make shopping faster and easier. (Including optional automatic category suggestions for new items.) • Add a photo to an item to make sure your partner gets exactly the right one. (Premium version only.) • Add items by scanning barcodes. (Premium version only.) • Browse your favorite meal ideas anytime, anywhere. • Add all the ingredients for a recipe to your shopping list with a single tap. • All your items, lists, and recipes are automatically backed up onto the Internet. Upgrade, replace, or reformat your phone without worrying about losing your data. • Convenient hands-free shopping with your Apple Watch. • See and edit your lists and recipes from any desktop web browser. • Add items with your voice using Siri on your iPhone, Watch, or HomePod. Supports other popular voice assistants too. • Versions available for other popular mobile phones too, in case your partner doesn't have an iPhone, iPod touch, or iPad. Visit https://www.ourgroceries.com for more information. 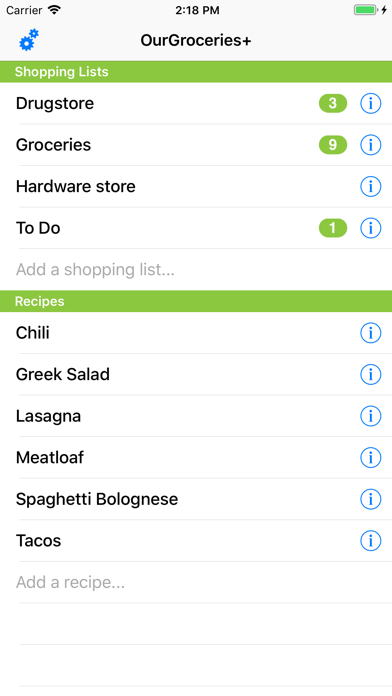 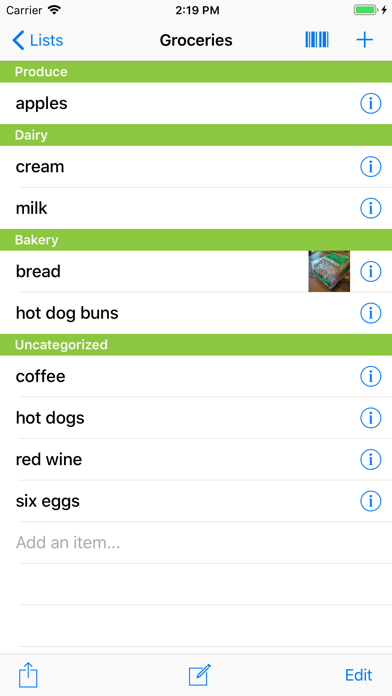 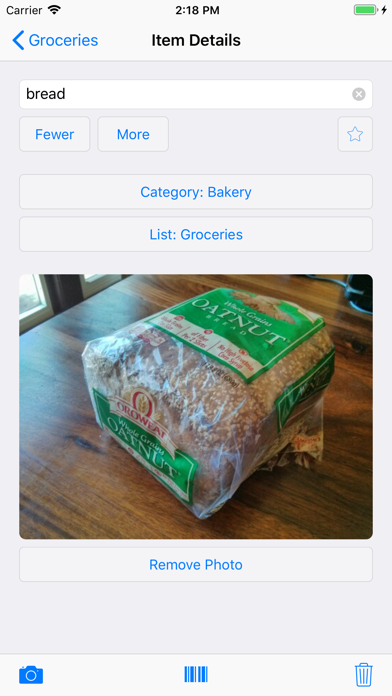 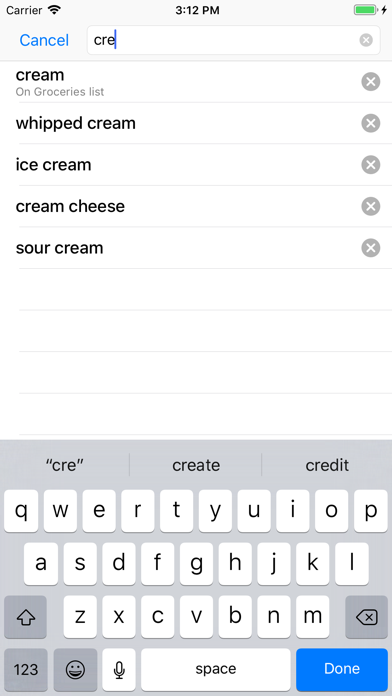 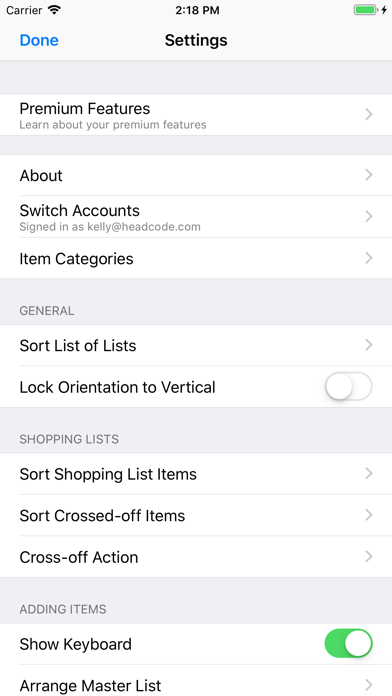 Easy and quick. Just needs ability to indicate amount more than quantity. (1 or 2 vs 8oz or half lb)
By Yukonj

So handy, and multiple users can add items. I have a list for all the stores .... Safeway, Home Depot, Trader Joe’s.
By pcxtrader

Wish I could give it 6 stars!

This has god to be the best purchase I’ve ever made on the App Store. My wife and I use it almost daily for YEARS. First off, it’s free, but to remove a little banner ad (and support the developers) you can pay a few bucks. And no subscriptions either, like so many app devs are doing nowadays. And it’s still being actively developed, with new updates adding features often. And it’s stable. It might be the only iOS app I have that has never ver crashed. AND (I have a lot of ands for this app) it’s on the web also, so you can add stuff to your lists if your iPhone isn’t handy. We use it daily for our shopping list, but we also have lists for Vacation Packing, Camping Trips and even keeping a list of potential names for our son (we chose Matthew)! Love the app, best investment I’ve made in an iOS app!
By Plazman888

I bought it several months ago to use it in apple watch. Very useful. But now I have to buy it again! Why? ------------- Thanks to the developers. The solved this problem.
By NYH91

Update: OurGroceries support responded to an email I sent on this topic and worked with me until the problem was solved. My husband and I have been using this app for more than a year, and we have liked it. But we have been spending a couple of months visiting family in Canada, and every time we go to the store, the app adds Mountain High Vanilla Yoghurt (Canadian spelling) and Mountain High Plain Yoghurt to the list. If I cross them off, they jump right back on. Since we have been shopping together, it’s been good for a laugh, but we could run into trouble if one of us thought the other added new items to the list and we started coming home with a lot of stuff we didn’t want. It would defeat the purpose of the app.
By LanTok

Unlike so many apps, this app doesn’t try to do everything. The developers have embraced the idea of keeping it simple, which results in an app that just works.
By sean_44

I love almost everything about this app. I especially love the way it can be shared between phones/devices which allows everyone to add to, take from, or simply see updated lists. I also like having the capability of adding photos for each item.
By Kiko's Wife

Upgrade is worthless for me.

For $9.99 a year upgrade you get no ads and the ability to scan barcodes to add items to your list. I like the app and when someone adds something it shows up instantly on my app. But if, say, my daughter wants to scan the barcode for the shampoo she uses so I can pick it up the next time I shop, she too has to pay for the $9.99 upgrade. That would apply for my wife as well because we all have our own appleid’s. So for the three of us the upgrade would cost $30 bucks. Had I known that wouldn’t have purchased the upgrade and it isn’t something you find out until after you bought the upgrade. Weak, ineffective and does not save time which is the entire point of this app. Beware.
By Maj__Al

This is probably my most-used, most-useful app. I highly recommend it. When my previous grocery list app was phased out, I downloaded a few others to try out. I liked this one the best, and is better than the old one! I love that my husband and I can add things from our phones throughout the week, and everything is there when I go shopping. One thing I did to make it even easier to shop is to create my own aisle names, preceded by the aisle number for my main grocery store. For example, 06 - Condiments/Dressings, 08 - Baking Goods/Candy. This way, everything is in the order of that route I take through the store. And adding new things to the list, it’s easy to see which aisle would have the item since my custom name specifies it. It took a little extra time to set it up this way, but was well-worth it for me. If you don’t do custom named/numbered lists, the app will suggest a category, so that would be useful too. With the premium upgrade you can even add pictures of an item to ensure the spouse doesn’t pick up the wrong variety.
By Shellsbells1969

This is the best app I’ve found for sharing lists with another person. I love the sortable categories you can create; I’ve created one for each aisle in our grocery store so we always see our list in the correct order.
By tonytx05