•THIS APPLICATION IS FOR DISNEY WORLD IN FLORIDA. IF YOU ARE LOOKING FOR DISNEYLAND IN CALIFORNIA, CHECK OUT OUR OTHER APP "HIDDEN MICKEYS: DISNEYLAND"• There's an extra special way to enjoy Walt Disney World and this app is your guide. Hunting for "Hidden Mickeys" (images of Mickey Mouse cleverly concealed in WDW's theme parks, restaurants, hotels, and other areas by Disney artists and designers) is fun for all and a bona fide vacation mission for many Disney World fans. Serving as the OFFICIAL application to Steven Barrett’s bestselling book “Hidden Mickeys – A Field Guide to Walt Disney World's Best Kept Secrets,” the mouse hunt is taken to a whole new level of interactivity with this application for iPhone and iPod Touch! Utilizing GPS tracking [iPhone only], your location is scanned and immediately lists the closest Hidden Mickeys to you. If you’re not in the parks, or if you’d rather scroll through the different locations, you are able to browse categorized lists of each Hidden Mickey location. Keep track of which Mickey’s you find with an easy to use built-in scoring system. Keep in mind – this is a scavenger hunt! The score counts if you want it to, so do your best and try to use the least amount of hints as possible. Whether you’re playing solo or with the whole family, you are able to keep separate user profiles to keep track of everyone’s progress. Spanning all four parks and documenting over 1200 Hidden Mickeys, this application will add a whole new level of entertainment to your trips to Disney World! In this application you'll discover well over 1200 Hidden Mickeys throughout various locations at the Walt Disney World Resort including: • Magic Kingdom Park • Epcot • Disney's Hollywood Studios • Disney’s Animal Kingdom • Blizzard Beach & Typhoon Lagoon Water Parks • Disney Springs • EPSN Wide World of Sports • Miniature Golf Courses • Over 20 DIFFERENT Disney Hotels PLUS: tips, hints and author Steven Barrett's very own favorite Hidden Mickeys. We've also included the use of Game Center, which allows you gain achievements while playing! We've even hidden a few of these that can only unlock from certain places inside the park - can you get them all? True to their name, Hidden Mickeys are elusive. New ones appear from time to time and some old ones disappear. When that happens — and it will — Steve will let you know on his web site: www.HiddenMickeysGuide.com. Periodically, the application will be updated to reflect these changes, becoming your best source for all things Hidden Mickeys! “Hidden Mickeys” is based off of the newest and most comprehensive edition of the book. “Hidden Mickeys – A Field Guide to Walt Disney World's Best Kept Secrets” 8th edition can be found for sale throughout Disney World, in stores, or online at Amazon.com. 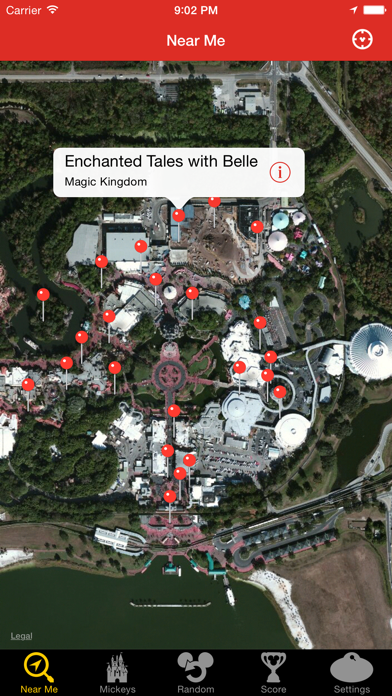 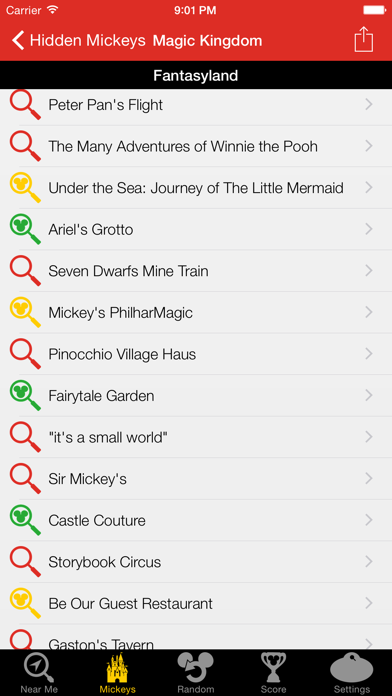 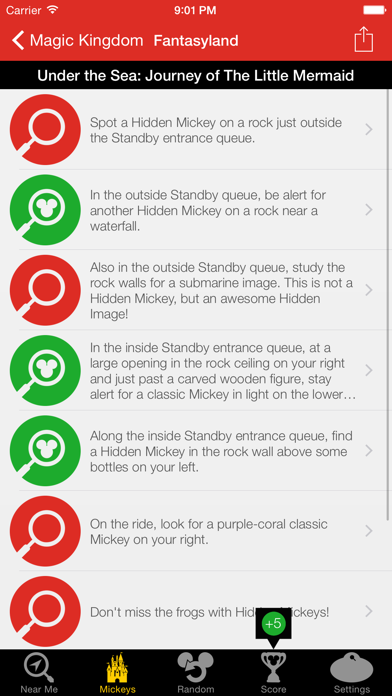 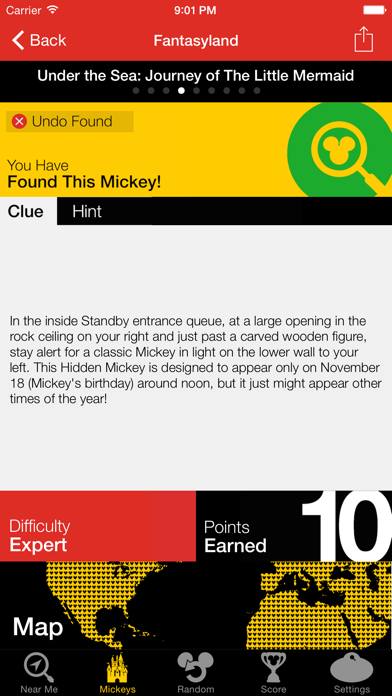 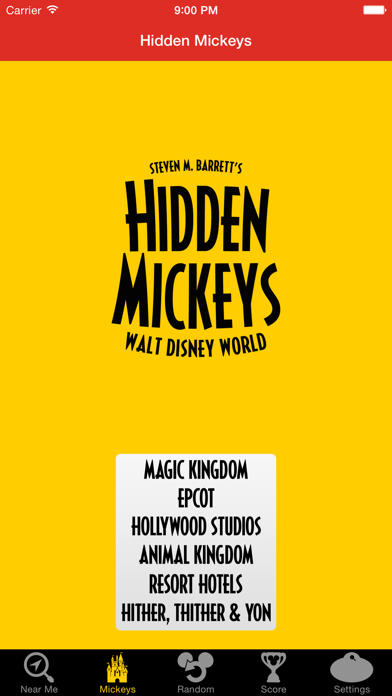 This isn’t a bad app but it is in desperate need of an update. So many areas either don’t exist anymore or new areas (galaxys edge and toy story land) are not even on here. Many resorts have had updates that don’t have Mickey’s mentioned in the app. Disappointed with the price for how outdated it is. Check out a book first.
By Jack Wigums

I’ve had this app for years and I love it but it REALLY NEEDS AN UPDATE! I go pretty often and I love to look for mickeys but there is so many new lands and rides that have plenty of hidden mickeys that I can’t find. Other than that there is still a lot of hidden Mickeys on this app that I really recommend.
By Katmandue12345

I have enjoyed using this app for previous visits to track my hidden Mickey progress, but it needs to be updated to the latest version of the book, which has been out for months now.
By 👍🏼this guy👍🏼

This app is amazing but… there is a few missing/outdated. So if you could make this a Wikipedia type app that would be great!
By Jdalton77

Love this App but it needs updating!

Looking for hidden mickeys is one of my favorite things to do as Disney! I love that this app is easy to use and keeps up with my progress between visits. However, there are some mickey’s listed that can’t be found any longer. For example the hidden Mickey in the Hall of Presidents is no longer there since they have replaced the previous George Washington portrait with a new one. I wish there was a way to mark or flag that Mickey as removed. This app is also missing new areas such as Galaxys edge. I would love to see an update on this app to include all the new things. I would also love if there was an option to attach a picture once you’ve found a Mickey so you can remember where you found it.
By a2hl3ynicole

Amazing but needs an update

This app is fantastic! It is just like the book with well detailed hints on where to look everything! I love how you track them with markers telling you which o es you have found. The only bummer is that it needs an update. I don’t understand why the app would not stay current like the books? Even if I had to pay for that update, I would. Other than the update, great app!
By Statage7

I’ll give 5 stars after an update. The app is great, but the information is old. As others have mentioned, a lot of the areas mentioned in the app have changed or been eliminated. Also, there are new lands (Galaxy’s Edge, for example), hotels, shops, and rides that are not included. Permanently closed attractions and some no longer at WDW (The Great Movie Ride) are still listed. As many have pointed out, sometimes the hints given are not enough of a hint and the “Hidden Mickey” remains hidden. I have purchased many of the book versions of this app as the new releases include updated information. I hope this app is updated soon to include new “Hidden Mickeys” and remove the missing ones. I understand this is difficult to maintain and constantly update as the “Hidden Mickeys” are not officially listed anywhere and the parks, hotels, etc. are constantly changing. If more frequent updates could be possible, I’d consider paying a subscription to this app, depending on price.
By sarbs

Sadly outdated. Totally not worth the $. So disappointed. Half the hidden Mickeys that I looked for were no longer there (I’m not talking I didn’t see them, but displays described were longer in locations). I was looking for added fun, but was just frustrated and disappointed.
By Shel785

Still great but needs another update

This is great to pass the time but I totally recommend peeking into the book as they are more updated than this app! Sometimes the instructions are not as clear in app as in book (vice vers..) However!… if your like me and the kind that uses the book more than the app, you can use the app to keep track of what you truly found and mark it off in the new HM edition book.
By MaryK.B

Kids were so excited to look for hidden mickeys in Disney Springs, but when we went into the Disney Store, we were told it remodeled last year and none of the hidden mickeys in the app were there anymore. Talk about disappointment.
By KNSmith1605